The Biathlon World Cup 2013 in Ruhpolding

Bayerischer Rundfunk's FÜ1 produced the national signal and TopVision's HD Ü5.1 the international signal
Spectacular fireworks and impressive performances were the themes of the opening ceremony on January 8th in the Ruhpolding Championspark. Following the biathlon World Championships last year, the world again was watching the Biathlon in the Chiemgau Arena for five days. Tora Berger, Miriam Gössner and Martin Fourcade led the winner's parade in Ruhpolding. Berger anchored the winning women's relay team and then dominated the mass start on Sunday. In between, Gössner captured the fan's hearts by running away with the sprint. Then there was Fourcade; he anchored the relay, and flew to wins in the sprint and mass start. Norway and France with a bit of Germany thrown in was how the week went. 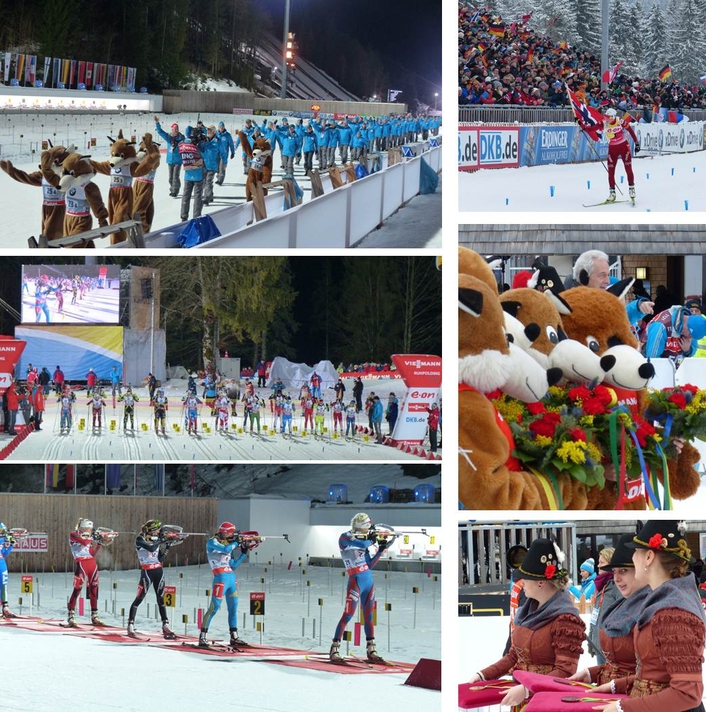 Technical realization of the international TV signal
The host broadcaster Bayerischer Rundfunk had commissioned TopVision to produce the world feed in 1080i/50 HDTV. Within the total of 27 cameras for the international signal (a mixture of Sony HDC-1000, HDC-1500 and HDC-3300 with Canon ENG/box lenses and Lemo connectors) a variety of special camera systems provided amazing views of the action of the biathletes: One camera on a MAT tower on top of the “Schießplatzberg”, one camera on a hot head on the track up to the “Schießplatzberg”, one more at the shooting range to get front views of the biathletes during their shooting practice, another one on the cable bridge behind the athletes to get close-ups of the targets and finally on a 35m high lighting tower for the beauty shots. Also two crane cameras were in action: a 12m crane was located at the “FischerS” and a 3m crane was serving at the shooting area, both were provided by FFL Rieger. Two HDC-1500 cameras were equipped with wireless adaptors from BMS and gave the necessary freedom for the shooting in the crowds and at the finish area.

Camera Plan for the Chiemgau Arena in Ruhpolding 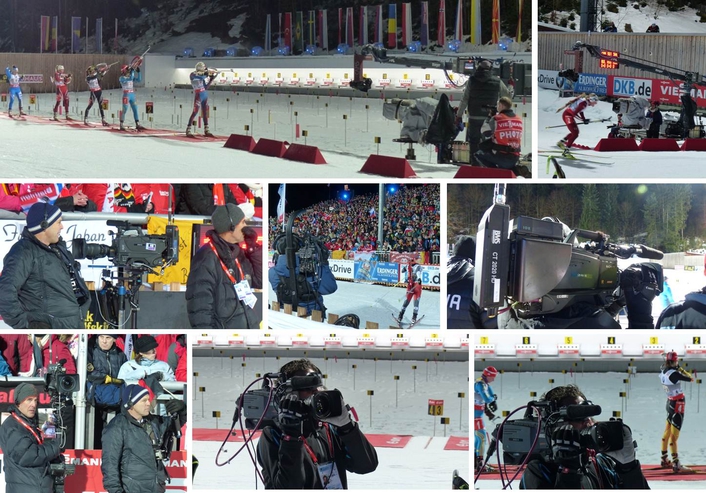 Cameras in the Chiemgau Arena 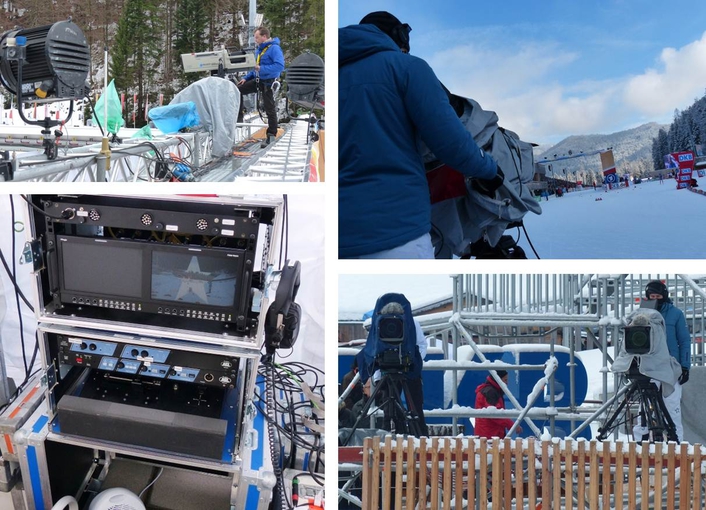 The Camera signals were controlled and monitored in the new state of the art TopVision OBVan HD Ü5.1: Centerpiece for the video mixing was a Sony MVS-8000 while a Stagetec Aurus was in control of the audio. A Grass Valley Trinix video matrix in combination with a KSC commander from BFE was controlling all the signals. Additional flexibility was added by the inclusion of a KVM matrix from Guntermann and Drunk. In addition to classical KVM signals, the system switches high-speed USB 2.0, RS232 and bidirectional audio. All 27 camera signals were recorded on to eight EVS XT3s and controlled by four SloMo and three SuperSloMo operators. A Riedel Artist matrix guaranteed the communication between the cameramen on the track and the other crew members. 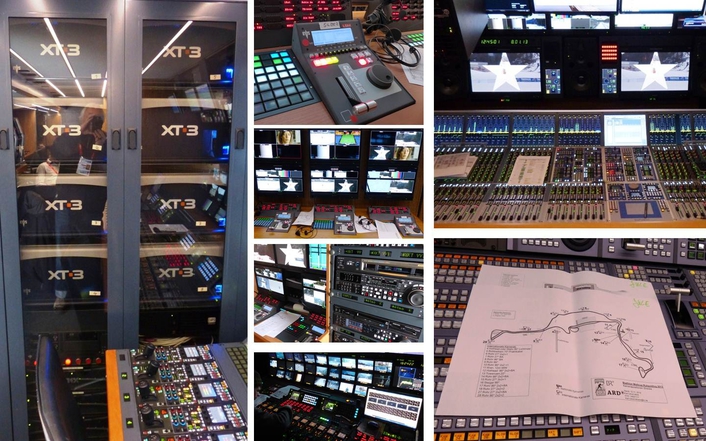 The national TV signal for Germany
Bayerischer Rundfunk had sent its HD OBVan FÜ1 to Ruhpolding and provided eleven additional cameras to enhance the international signal with images from and around the German biathlon team. Also the so called “Schießtrick” was produced in the FÜ1 and handed over to the TopVision Ü5.1 for inclusion in the international signal: The athlete and the target is covered on a split screen and the TV viewer immediately sees where the athlete has hit the target – or missed it. The “Schießtrick” was produced by MPP Mediatec. The additional eleven cameras were HDC-1400 from Sony and in combination with the international signal the unilateral signal for the German program was mixed on a Sony MVS-8000 while a Lawo mc²66 was in control of the audio. A Grass Valley Trinix video matrix in combination with a VSM commander from L-S-B was controlling all the signals. 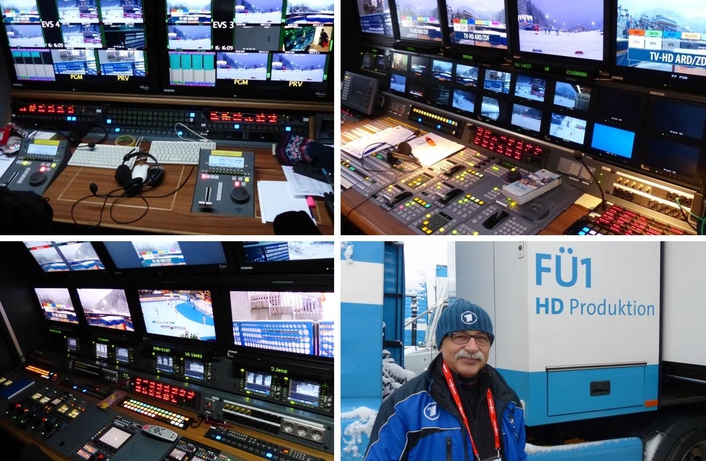 Hans-Jürgen Kreissl, Head of Outside Production at Bayerischer Rundfunk, explained the production of the national signal 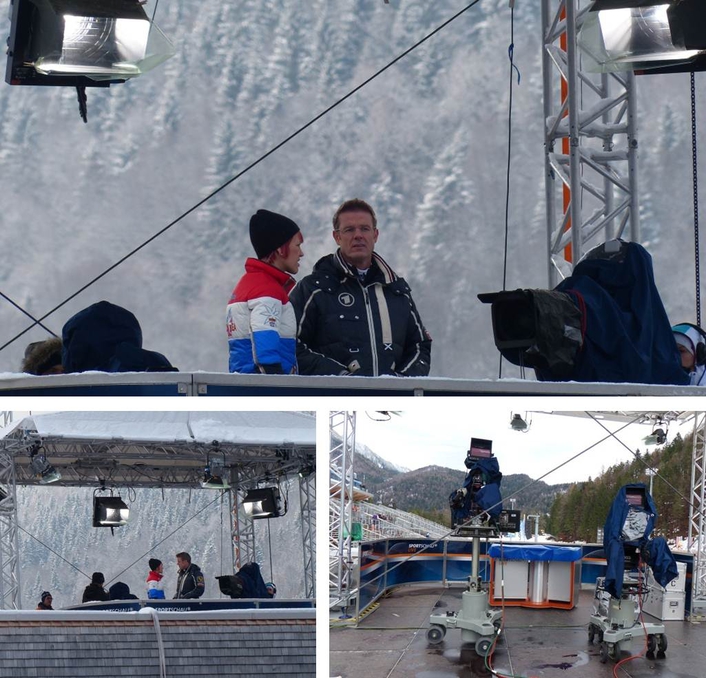 Graphics, timing, data
SIWIDATA provided the timing, results and graphics services as part of the ongoing contract with the IBU as their partner for all major events. Each Athlete was equipped with AMB ChipX transponders which sent a signal to a decoder at each timing checkpoint. The decoder recorded the exact time that the transponder passed over the central axis of the detection loop. The unique feature of the AMB ChipX system is that it uses active RFID transponders. Each transponder is equipped with a battery that is used to power its circuitry and antenna. The internal circuitry of the transponder is only activated when it comes near a detection loop. Powering each transponder ensures that its unique ID is transmitted to the detection loop enabling 100% capture of the passing of all athletes in the competition. 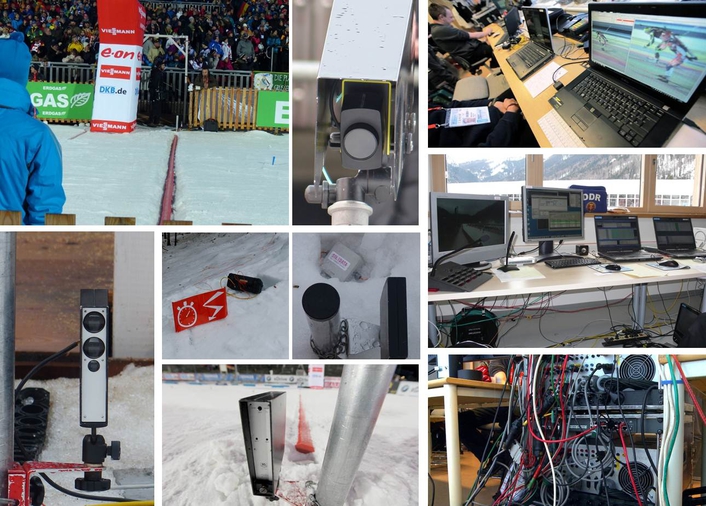 Siwidata - the provider of the timing data

Included in the data stream from SIWIDATA was the information from the shooting range (provided by HoRa Systemtechnik). HoRa is specialized in the production of biathlon shooting target systems and was commissioned to provide the service and deliver the shooting results for the duration of the World Cup in Ruhpolding. SIWIDATA generated out of the raw data streams a video signal which was send as Fill&Key to the host broadcaster. The graphics content used the full 16:9 frame size of the screen, however timing and shooting graphics were designed to keep the most important information in the 4:3 area, while some information like the athlete names, their current race positions and shooting errors in previous shooting sessions were truncated to 4:3.

The lighting of the biathlon competitions
For the first time in Ruhpolding five of the six competitions were carried out in the evening and therefore the whole arena and the cross country tracks needed temporary lighting equipment. Bayerischer Rundfunk together with ARRI Lighting and Roggermaier installed 15 lighting towers on trucks and snow cats consisting of ARRI Compact HMI lights (6x 1,2kW, 8x 2,5kW, 10x 4kW, 12x 6kW) and ArriMax HMI fixtures (11x 12kW, 14x 18kW). In total an additional 1MW power was required to handle the competitions in the evening. 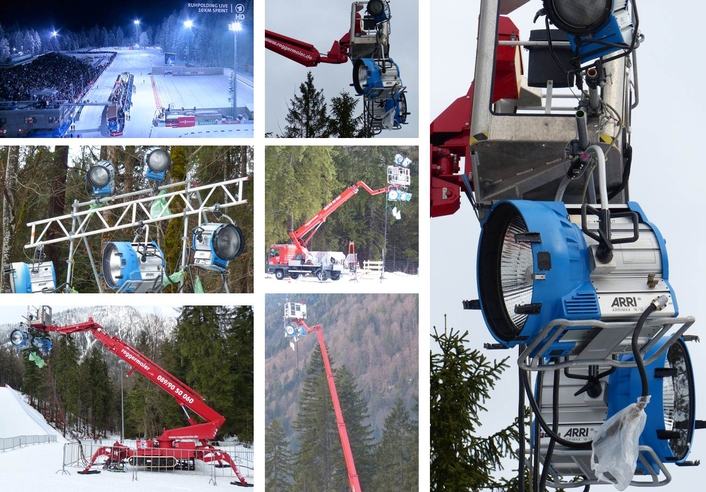 The lighting installations for the evening events

Power and power distribution
On behalf of the local organization committee Bredenoord had set up a comprehensive temporary power plant. In every technical area the host broadcaster was provided with a single backed-up and uninterrupted power supply to prevent any hum or disruption. The center of the TV electrical supply was the main distribution panel at the TV Compound. From there the OBVan compound, the lateral and unilateral OBVans and SNGs as well as the broadcast areas in the venue were fed with 230/400V, 1 or 3 phases, 50Hz. The distribution boards were equipped with CEE-3-phase connections for 16A, 32A, 63A and 125A as well as Schuko sockets for 16A. All connections were additionally protected by residual current devices (RCD).