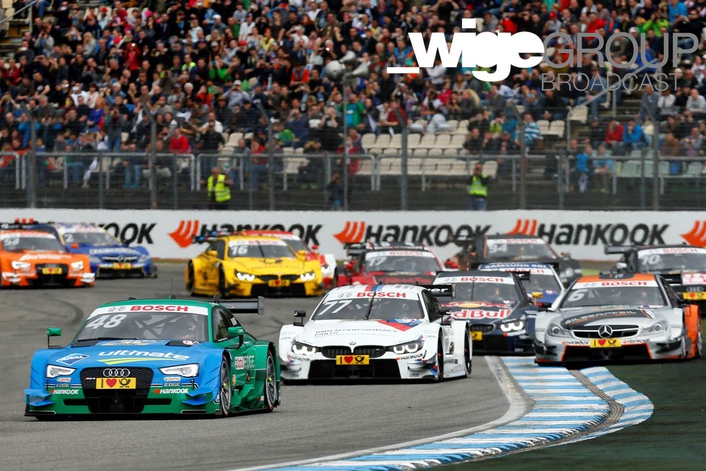 With a track record of commercial success over more than 35 years, _wige MEDIA AG is a leading communications company in sports and the car racing business, offering a broad palette of media services in the core sectors of technology and content. Via its specialist subsidiaries _wige is active as a technical and editorial service provider, as well as a marketing and event partner for numerous major sports promoters and leading companies.

_wige offers comprehensive technological expertise. Besides a fleet of in-house broadcasting vehicles and all-purpose production units _wige is one of the largest providers of wireless technology on the German market, supplying more than 30 wireless camera channels in HD quality. In event, system, and racing technologies there are no limits – from audio-visual planning for corporate identity to the equipping of entire racing circuits.

As a communication specialist _wige serves leading companies in the automotive area, in sports, consumer goods, and entertainment. The focus is on consulting, content production and marketing in the context of the increasing convergence of brand messages with classic and digital media. A specific event unit focuses on live communication as an experience factor in branded content, taking charge of the conception, organisation, and implementation of events for the Porsche Driving Experience.

The company is headquartered in Cologne, with specialist subsidiaries in Meuspath (Nürburgring), Munich and Stuttgart. 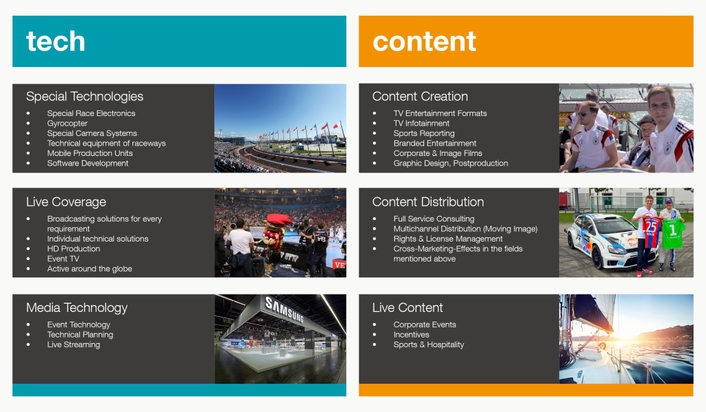 Long-term production partner for the DTM and ADAC GT Masters

At the start of the DTM season 2015, series organiser ITR and production partner _wige MEDIA AG renewed their cooperation for three further years. The corresponding agreement covers extensive technical and media services. _wige has been active on behalf of ITR since 1992, boosting the strong international profile of the series ever since the start of the new DTM in 2000.

_wige provides high-quality image production from all races (including qualifying) in HD quality. TV partners worldwide receive the live signal along with detailed on-air graphics via satellite and are able to use editorially prepared highlights for their coverage. Viewers can watch the races in selected scenes from the drivers' perspective through on-board cameras provided by _wige. Additionally, moving image material aired on all DTM media channels is designed and rendered by _wige. 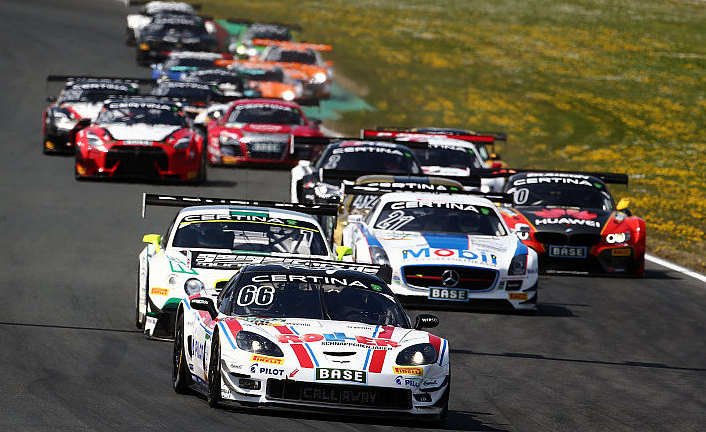 Technically speaking _wige operates the timing service, the Fan TV programme which is transmitted around the entire event area, and the event and race safety technology. _wige attends every DTM race with a crew of approximately 150, up to 50 cameras, and multiple production vehicles. The purpose-built devices for on-board images, graphics services, and timekeeping are transported from Germany to events at overseas circuits too.

For the coverage of the DTM, _wige deploys both HD OB truck HD_two and VIPER_2, a custom-built multifunction truck with 12 workstations, one control room, one conference area, and one server room. Data are collected, rendered, and converted into various formats in VIPER_2  by a variety of servers and databases. All satellite signals are provided with generated information pages via an analogue and digital HF cable headend. A 64-port KVM matrix allows access to one of the permanent servers from every workstation. An intercom system with wireless connectivity guarantees perfect communications.

_wige will also continue to provide moving image production and media rights management for the ADAC GT Masters for the next three years. _wige was first commissioned by ADAC to produce the TV images in 2007, meaning that it has accompanied the 'league of super sports cars' since its debut year. 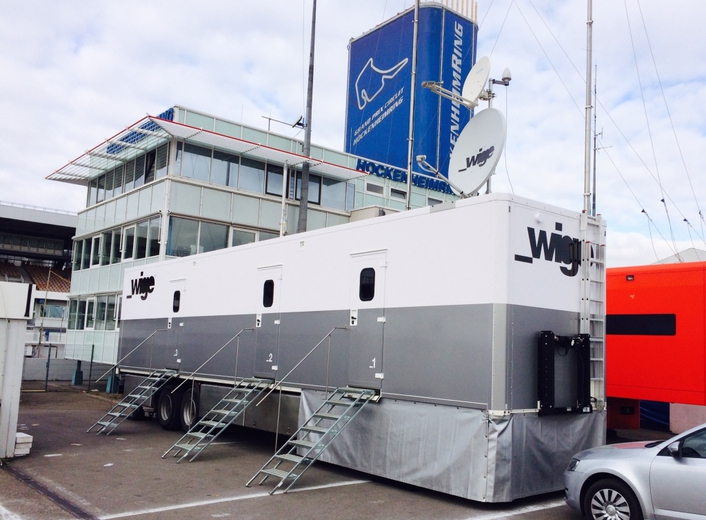 _wige creates the perfect setting for the race, which draws over 200,000 enthusiastic fans to the “Green Hell”, with TV productions, international marketing, sponsorship packages, hospitality facilities, on-site corporate events, and much more. 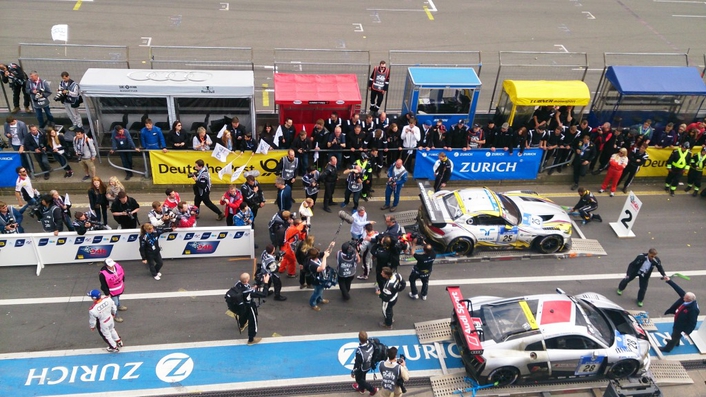 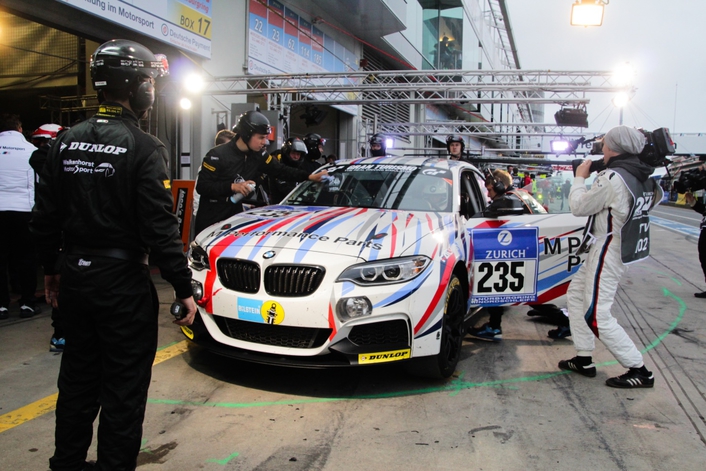 _wige’s fundamental and ongoing task is to continue the expansion and development of the internationally renowned motor racing spectacle, staged for the 43rd time in 2015. Alongside a number of firsts in the TV production operation, including production in HD using four OB trucks and fully updated TV graphics, the timing service this year incorporated four split times for the first time. Motorsport fans were kept up to speed with all relevant live timing and lap time data at https://livetiming.tracktime.info/nurburgring, a site featuring a highly attractive and premium design. 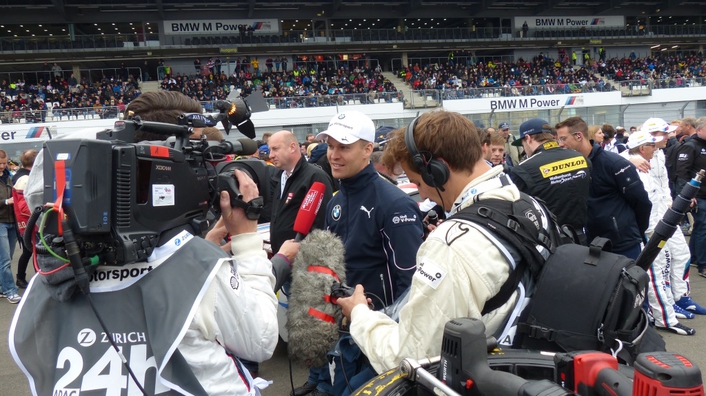 _wige also provided a world premiere at the 24-hour race in 2015 with the 4G|LTE Vodafone Livestream, allowing motorsport fans all over the world to follow the event live for almost 26 hours and enjoy the thrills of the racetrack directly on their personal mobile devices.

To deliver the ambitious project, Vodafone installed its own LTE transmitter masts all around the world’s longest circuit. Aided by four LTE onboard cameras, an LTE flying drone and Stress Level Monitoring by Get-Speed, a service already proven in the VLN endurance series, fans enjoyed fascinating live footage from the cars and the track. Well-known presenters and six professional motorsport commentators explained and illuminated the event for German and English-speaking viewers. A total of 1.9 million people accessed the Vodafone Youtube channel to follow the event live from home and at trackside. 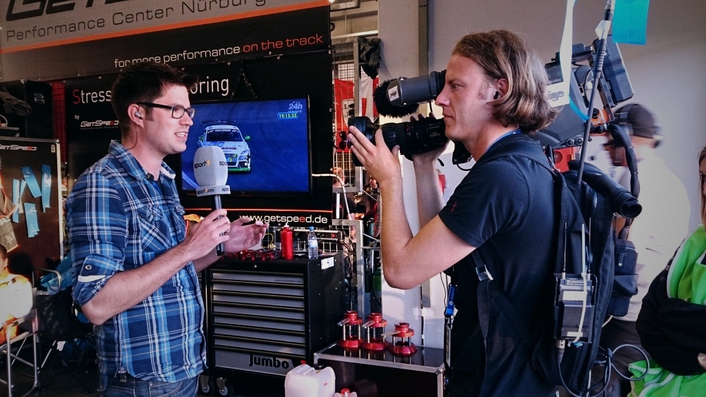 _wige is an established communications partner beyond the motor racing world too: EHF Marketing has awarded Host Broadcasting responsibilities for the VELUX EHF Handball Champions League to _wige BROADCAST for the next three years. The package of TV services incorporates TV production of all home matches played by German teams, with up to ten cameras and a dedicated UB truck producing the world feed. 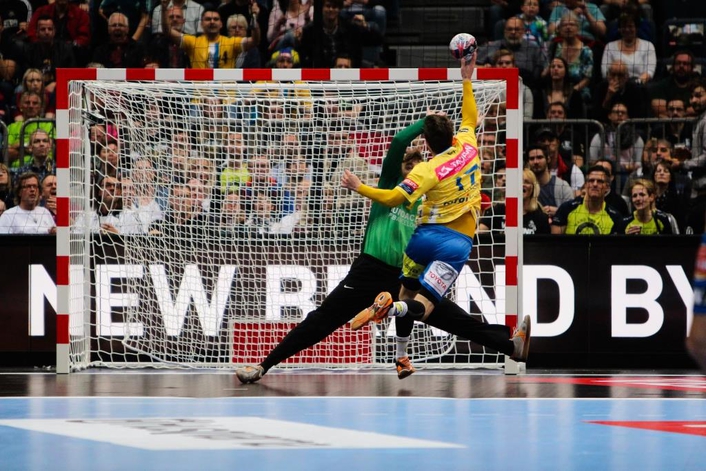 The highlight of the season, the VELUX EHF FINAL4 on 30 and 31 May 2015 at the LANXESS arena in Cologne, will also be supported by _wige. On top of full TV production duties, _wige will provide further services including additional ENG teams, sequence editing, provision of cutting stations, commentary support and production of the stadium TV programme, to be implemented by a 40-strong on-site team.

In-goal cameras delivered footage from inside the goals for the first time in 2015. This feature is well-established in many other sports but had been problematic in handball up to now, as the relatively high and frequent number of goals (20 and more) placed previously insurmountable physical demands on the camera. Now, _wige has developed a special housing and fastening system to prevent cameras being dislodged and damaged. 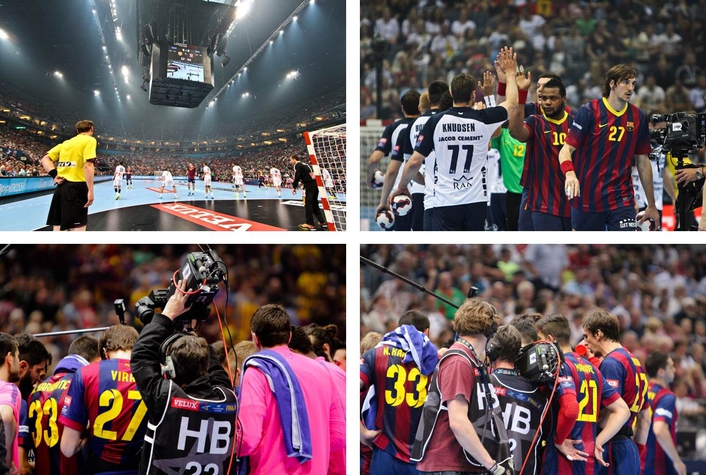 The time-out camera is another camera system specially developed by _wige, capturing the team talks during time-outs and breaks in play from a bird’s eye perspective and bringing viewers new insights into team strategies and tactics. 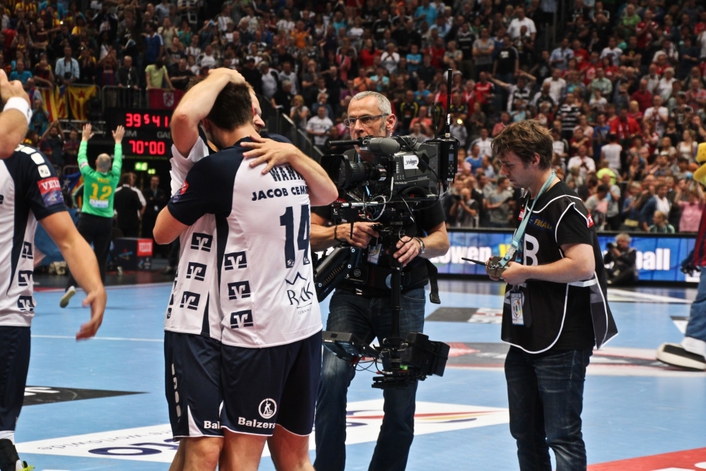 Naturally, _wige’s activities are not confined to sport, but also include projects in the entertainment industry. The company produced the TV images for a live broadcast of the “Wenn die Musi spielt” winter open air show from the Austrian town of Bad Kleinkirchheim.

On behalf of Austrian broadcaster ORF the live show was produced with the wige_ BROADCAST truck HD_one. The equipment included nine cameras, one dolly, a ten-metre camera crane and three wireless cameras. Fans of Schlager and folk music enjoyed the event live on ORF 2 and on MDR at primetime on Saturday evening, 24 January. 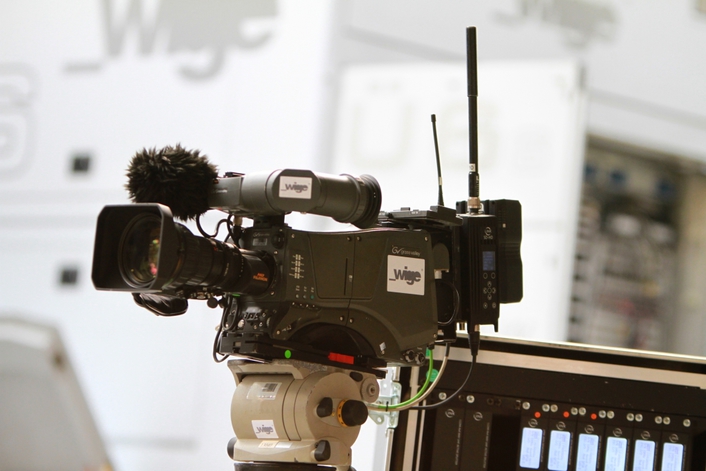 Shorter integration time, maximum operational safety: Up to 16 wireless cameras can be operated from a specially designed vehicle – the RFPU 1. The cameras can easily be integrated into the production facilities, such as the OB truck or the studio, via signal transfer. This procedure minimises integration time while ensuring maximum operational safety. The coverage of the reception area can be maximised via local receiving antennae, even overcoming obstacles such as large areas, buildings or difficult terrain. 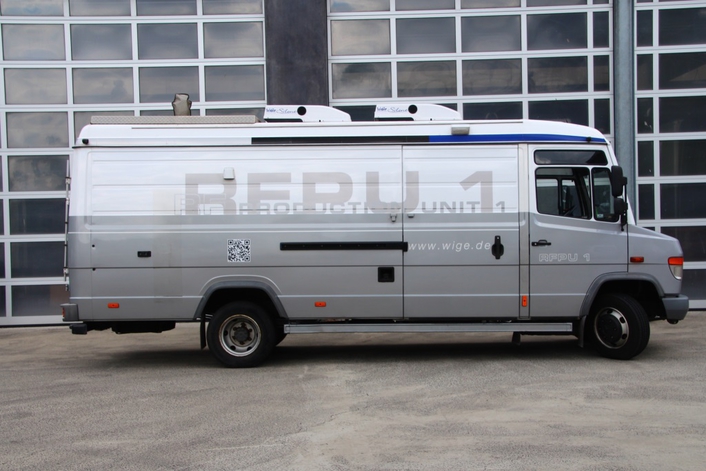 _wige _eaglecopter - innovative, flexible, cost-efficient: the _eaglecopter is _wige's innovative and cost-efficient new product for aerial image production. It has the same basic features as a conventional helicopter, but with dramatically lower operating costs. The ‘copter seats a pilot and a camera operator, who controls a stabilised pan/tilt head. The _eaglecopter can be used for live broadcasts, film recordings, or as a relay.

Grass Valley LDX Series added to camera inventory: _wige has also expanded its equipment inventory by acquiring a number of new HD camera systems, investing in LDX Series cameras from manufacturer Grass Valley. This product line is an ideal complement to _wige’s existing infrastructure and can be applied in a wide variety of situations.

As part of the investment the _wige portfolio now includes an LDX86 camera. This will be offered on the market when not assigned to in-house productions and is available to customers effective immediately on an equipment hire basis. The innovative six-fold super-slow motion camera is deployed in sports coverage to generate footage not currently possible with conventional super-slow motion cameras. The LDX86 provides an attractive alternative, especially when covering very high speed sporting disciplines. 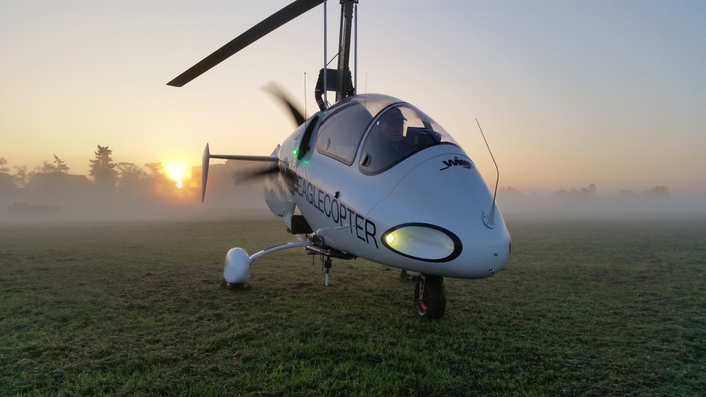 Alongside live productions from major sporting events, _wige’s areas of expertise include equipping and enhancing new and existing international sporting venues. The company worked for more than a year on providing comprehensive media technology solutions for the new race circuit in Sochi, Russia. _wige managed this major project as general contractor from the initial concept and planning stage through to final installation and commissioning.

A total of 25 trucks’ worth of equipment were transported to Russia where the components were assembled on site into a perfectly configured track control system. The media technology solutions installed at the new circuit included Race Control, video monitoring of the entire circuit, timing, a media distribution system, the starting light gantry and electronic flags, radio links, Voice over IP and installation of the entire data network. The system includes backup power supplies for critical areas and stable Wi-Fi internet access even at periods of maximum demand. _wige SOLUTIONS also installed the circuit’s dedicated weather station, loudspeaker system and giant video screens distributed around the site. 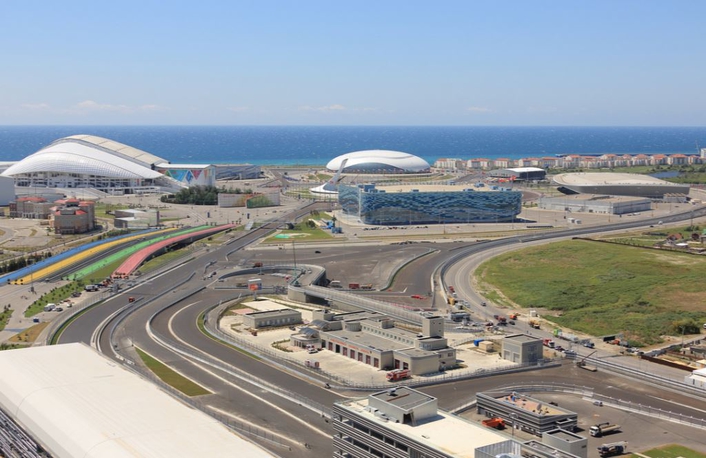 At every race, full coordination of the media technologies ensures complete reliability in all critical procedures. Fifty centrally controlled high-speed cameras allow permanent monitoring of the entire track and an immediate reaction in the case of an incident: marshals are alerted by radio, appropriate electronic flags activated or the Safety Car despatched onto the circuit.

Measuring loops installed at trackside and GPS transponders in the vehicles supply precise information regarding the exact position of every vehicle. This allows teams to access valuable data in a fraction of a second and provides spectators and viewers with a graphic presentation of the battle for victory.

The timing software developed by _wige provides not only split, sector and final times, but can also indicate whether drivers are obeying instructions from Race Control, for example when overtaking is temporarily not permitted or in the case of potential danger. If there is a tight finish, a high-speed camera generating up to 20,000 images per second guarantees the right driver will be named the winner. 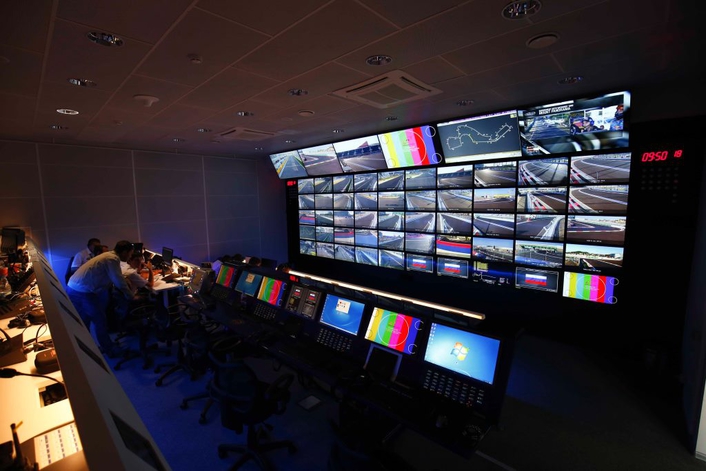 This major project was successfully completed in October 2014 with the inaugural Grand Prix of Russia. The circuit, located within Sochi’s Olympic Park, is currently world-leading in terms of race control technology and systems. After scrutinising and approval, FIA Race Director Charlie Whiting described the Race Control facility as “state of the art“ and “extremely impressive,” providing “absolutely superb“ images. Stroi International, the contractor with overall responsibility for construction, also expressed full satisfaction with the implementation of the project.

The dedicated research & development team possessed extensive experience in operating both permanent and temporary motor racing circuits. The team’s decades of motorsport expertise guaranteed the smooth and flawless implementation of the project.

For Volkswagen, _wige  documents the action and incidents from every stage of the World Rally Championship, producing webisodes and supplementary image materials throughout the season. Furthermore, the distribution to various online channels is managed and the YouTube channel enhanced with targeted features specifically to maximise reach.

In 2015 _wige has again been commissioned to provide editorial coverage of the Red Bull Air Race World Championship. The assignment covers all eight races, with _wige producing extensive content in the form of magazine shows, clips, and also the editorial material for the World Feed. The content is distributed in some 100 countries. In German-speaking regions highlights of every race are broadcast on ServusTV.