On the Way to the Olympic Games in Sochi 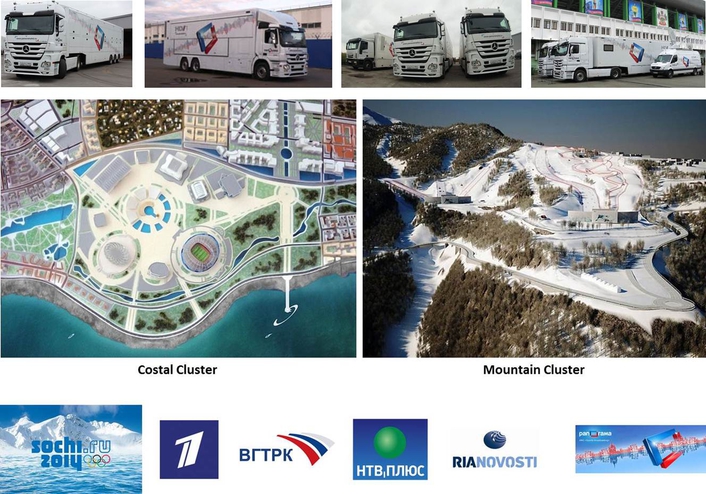 .
On 24 December 2009 ANO Sports Broadcasting (Panorama) was founded as an autonomous non-profit organisation by OJSC Channel One, FGUP VGTRK, OJSC NTV-PLUS and the RIA Novosti news agency with the mission to provide a national HDTV signal of the XXII Winter Olympic Games and the XI Winter Paralympic Games in Sochi in 2014, as well as an international HDTV signal of the XXVII World Summer University Games in Kazan in 2013.

The ANO Sports Broadcasting goal is to set up a modern broadcasting complex that will provide TV, radio, Internet and photographic coverage of Olympic events. To fulfill this goal Panorama has placed an order in November 2010 for 12 HD OBVans and 12 support trailers with ZAO, a Russian office of Sony. ZAO has subcontracted Sony Professional Solutions Europe in England to build five 10-Camera and three 24-Camera HD OBVans and Broadcast Solutions in Germany to build four 16-Camera HD OBVans. On 13 September 2012 the third 24-Camera HD OBVan has arrived at Panorama’s facility in Krasnoznamensk, Moscow Region, and was running through the acceptance procedures. It was the last of the 12 OB-vans that were ordered for ANO Sports Broadcasting.

For the games coverage in Kazan and Sochi Panorama is now training around 1500 television professionals from nine Russian regions to handle the various production and engineering functions at the games. And an important step towards this goal was the involvement of ANO Sports Broadcasting at the London Olympic Games. For the first time since the 1980 Olympics, Russia was running a live national TV transmission from the Olympic Games.

National TV Signal from London
A team of ANO Sports Broadcasting specialists was using one of the 10-Camera HD OBVans to bring a  national aspect to  the coverage of volleyball matches, focusing on Russian players, coaches, and fans and thus making the broadcast of particular interest to Russian viewers. On 30 July the Russian Prime Minister Dmitry Medvedev examined the 10-Camera HD OBVan on location at Earls Court. Vasily Kiknadze, CEO of ANO Sports Broadcasting, explained the way the OBVan operates for Prime Minister Medvedev and Alexander Zhukov, head of the Russian Olympic Committee.

“Here we test-run and fine-tune the technology we are going to implement during the Sochi Olympics,” said Kiknadze. The national signal production technology first tested in London is planned to be made fully operative by 2014.

According to Kiknadze, Medvedev took interest in the new TV equipment and agreed that Russia should develop state-of-the-art technologies and methods of sports broadcasting. The national broadcast of the volleyball games at the London Olympics was one of the main stages in the process of preparation for producing a national TV signal of the competitions  at the Olympic Games in Sochi. ANO Sports Broadcasting and the Russian Volleyball Federation jointly developed the broadcast concept, with the help of experts from the All-Russia State Television and Radio Broadcasting Company, Channel 1 and NTV PLUS. 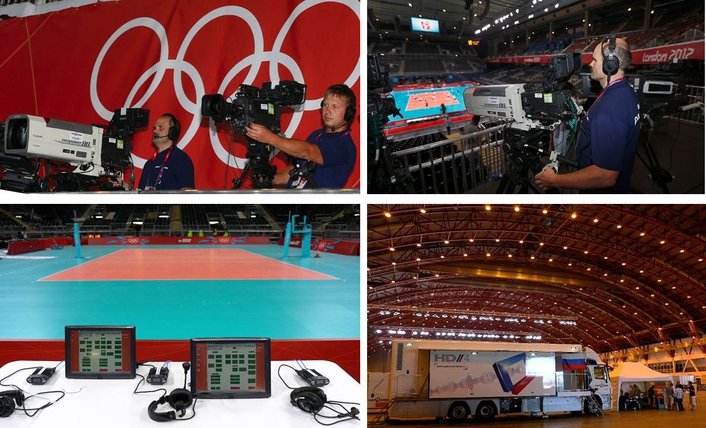 ANO provided the national TV coverage of women’s and men’s volleyball games with the participation of Russia’s teams that were among the runners-up for the Olympic gold medals and at the end Russia was able to top the competition and win a gold medal in men's volleyball. The coverage highlighted the most spectacular and emotional aspects of the matches, provided replays of key moments, followed players, coaches and fans to deliver a full picture. Real-time updates of the statistics coming from the teams’ headquarters were also provided to give a uniquely full viewing experience.

The ANO Sports Broadcasting crew consisted of ~35 persons including both experts with a vast experience of covering the Olympic Games and successful students who completed Panorama’s education courses in preparation for the Sochi Olympic Games. Therefore in addition to the 16 cameras operated by OBS, Panorama covered the Russian aspect of the matches with additional seven cameras while two more were assigned to the TV commentators, the mixed zone or for spectator shots.

HD OBVans Will Be Based Across Russia
Part of the concept of the national signal production in Sochi is the distribution of the 12 HD OBVans across Russia and training of the crews during more than 30 international events in the coming months ( e.g. Olympic Test Events in Sochi, Biathlon World Cup, Universiade in Kazan, etc.). Currently the 10-Camera OBVans are allocated to Yekaterinburg, Krasnoyarsk, Khabarovsk, UFA and Moscow; the 16-Camera HD OBVans are allocated to Rostov-on-Don, Kaliningrad, Sochi and Moscow, while the 24-Camera HD OBVans have found their home in St. Petersburg, Kazan and Moscow. This distribution of the HD OBVans is an advantage for the whole of Russia, because the training on state-of-the-art technology will be spread across the local teams and after the Sochi Olympic Games the HD OBVans will again be based in the above mentioned towns. 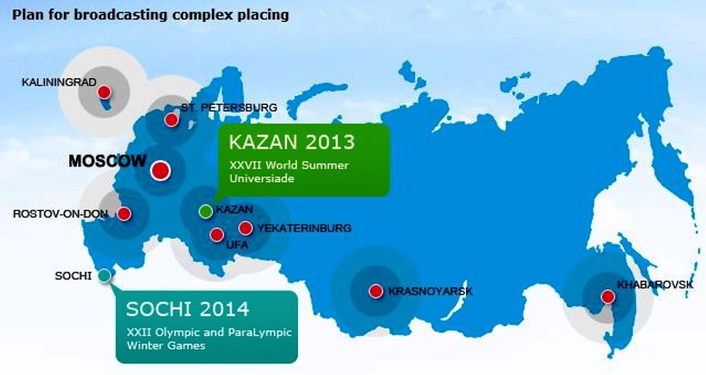 The Equipment for the HD OBVans
Wherever possible ANO Sports Broadcasting has kept the same brands across all the vehicles: Sony has provided a variety of equipment. This includes cameras, which are a mix of HDC-1500R and HDC-3300R cameras, with their HDCU-3300 and HDCU-1500 CCUs, the latter of which can operate hybrid: either on fiber or on triax cable. The flagship 24 camera trucks are to be equipped with the latest HDC-2500 3G cameras. VTRs include HDCAM, PDW-F1600 XDCAM VTRS, and various monitors, including BVM-E170 Grade 1 color monitors using the latest OLED technology.

Due to the fact that a number of Panorama personnel already were familiar with Snell vision mixers, the Kahuna 360 was selected for all 12 HD OBVans. It provides the ability to mix HD, SD and even  1080p sources in a single production and then offer multiple outputs of SD, HD and 1080p. The 360 moves away from the traditional concept of fixed M/Es, resources and formats. It provides far more keying power – in fact, up to seven sources on one mix/effect bus. These are made up of four super keyers and three linear or luma sources which are called ekeys. These ekeys are downstreams of the super keyers and have been designed to bring even more graphics to an M/E.

With the vision mixers coming from Snell, it made sense to purchase routers from the same manufacturer. The Sirius series routers are ideal for the restricted space that is found in an OB environment and Panorama decided that the new 840 router was the ideal model. The Sirius 840 consists of a 576x576 frame in a 26U format. One key benefit is that no other external splitters or combiners are required. In addition, the frame includes redundant power supplies, control cards and crosspoints.

Of course EVS equipment is installed in all trucks. The five 10-Camera HD OBVans are equipped with three XT3 servers, one XHub3 and one XF2 (removable storage systems). The XT3s are used for all stages from ingest to playout — including live editing, slow-motion replays, multichannel playback and transfer to third-party systems.

XHub3 is a high-bandwidth media sharing network that allows multiple production and playout servers to be interconnected through a central hub offering a bandwidth of up to 1.5Gbps. The XF2 server incorporates two removable hard disk drives, and is employed where archiving and backup for storing clips, media, live feeds or any other video content is needed. The seven vehicles that operate either 16 or 24 cameras have been supplied with greater numbers of the same equipment and systems, together with EVS’ IPDirector. Running on a Windows-based workstation, the IPDirector Suite allows ingest control, metadata management, editing and playout scheduling all to be managed from a single interface.

In addition, the 24-Camera trucks are equipped with Xedio dispatcher for ENG file reviewing, rough cut editing and import on to XT3 servers. The configuration also includes XedioCleanEdit (EVS’ NLE package) with IPLink plugin for file import on the timeline.

Following detailed testing and evaluation Oxygen DCT’s Penta series of monitors where chosen for the HD OBVans. All monitors in the main gallery, production, and sound areas are equipped with 3G inputs and 10-bit LCD panels giving up 1.07 billion radiant colours — allowing the production crews to monitor more effectively and in greater detail. The monitoring is compliant to EBU REC709 colour standards and upon installation each monitor underwent an additional in-situ recalibration to ensure identical color preproduction on all sizes of monitors and in each area.

Netherlands-based Axon Digital Design has supplied the trucks with Synapse modular processing equipment. These processors are used for a range of applications, including the upconversion, down-conversion and cross conversion of 3G signals. The modules support the distribution of video and audio signals throughout the vehicles as well as the embedding and de-embedding of audio signals. Synapse’s internal bus structure reduces the need for external cabling and is further easing the technical demands on each vehicle.

Axon’s miniaturised technology controls the synchronising, legalising and keying operations within the fleet. Finally, Axon’s SynView forms the standard multi-viewing platform on the HD OBVans. Included in the list of equipment is Axon’s new GDL200 unit. This was made especially for this contract. It is a dual standard legaliser for digital signals with full frame sync capabilities.

Audio mixing has been entrusted to Studer Vista 9 and Yamaha DM1000VCM with MY16-AE AES/EBU interface cards alongside high specification video and monitoring equipment. Communication equipment for the trucks has come from Riedel and includes a combination of Artist, MediorNet, Partyline and RockNet units.

Training is Key
As mentioned earlier, training is one of the key points of the project. Together with the main equipment suppliers and leading Russian high-schools, Panorama developed a special training programme. The first phase of training started even before the first HD OBVans were built. With the help of the suppliers, Panorama organised a special classroom in the form of an OBVan simulator, where both technical and production specialists were trained.

The second phase was run on the first 10-Camera OB vans. Each group of students was getting both theoretical and practical classes. Test productions were performed in all different kinds of sports.

On September 8-14, Moscow’s Skolkovo Management School hosted the training program’s third module, "Developing an innovative media content production model." The module’s objectives were: to analyze the current cultural and social trends defining media development; to review how functions of television change in response to the present-day social and cultural developments; to develop a new TV content production model; and to learn new advanced communications management models. On September 14, the trainees took the final test, and on September 15-16 they applied their newly acquired knowledge and skills shooting the Moscow junior football championships at the Noviye Khimki arena. 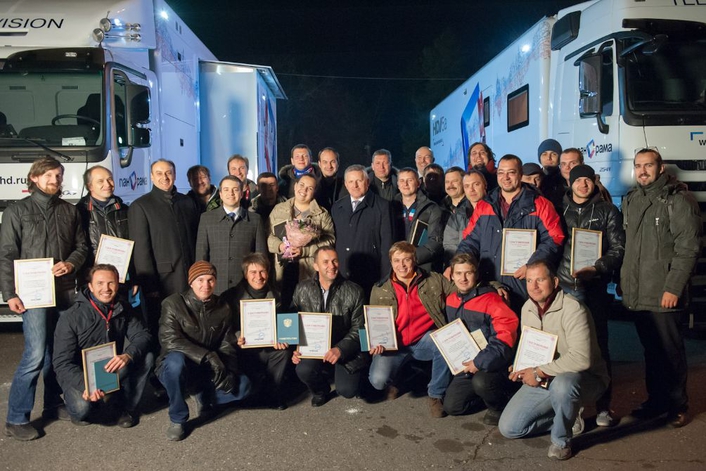 Also on September 16, the first stage of training for the Moscow-based 24-cam OB van crew was successfully completed. 13 engineers began their training on September 3 at the Moscow State Institute of Radio Engineering, Electronics and Automation (MIREA), while 34 production specialists started their course on September 7 at the Career Enhancement Institute for Broadcasting Specialists (IPK).

Beyond the Games, one of the aims of ANO Sports Broadcasting is to contribute to the development of the production industry all over Russia. All HD OBVans are operated by local teams, which have been trained in Moscow. They will continue working on future sports and cultural events in Russia and possibly outside of the country.