TVC and Croatel to 4K 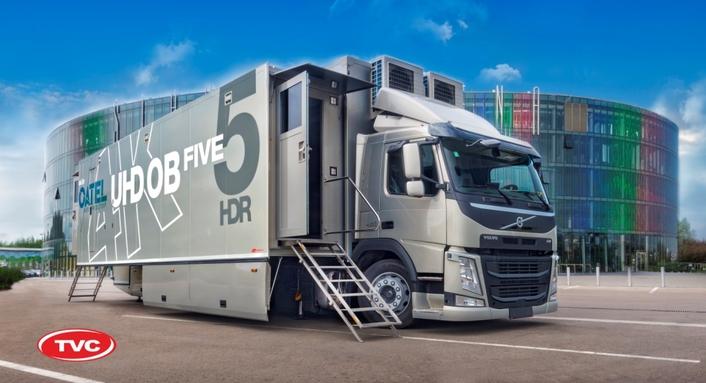 Systems integrator and coachbuilder TVC and outside broadcast production company Croatel continue their long lasting and successful relationship. Last year both companies embarked to build the UHD 4K OB van. This was the first 4K endeavour for both companies with numerous challenges and tough technical decisions along the way. Croatel OB5 UHD 4K has been in operations for a year already and lessons learned can now be shared with the broadcast audience.

The main goal of building the UHD 4K OB van was to achieve the best possible UHD picture quality available at that time. While increasing the number of pixels from HD to UHD is already a significant step forward, it was clear that the defining factor for an improved image would be the high dynamic range (HDR) technology. HDR improves the pixel itself providing the depth of colour, contrast and clarity to the picture which surpasses by far the previous viewing experience. This is what the broadcast technology innovations are about in the first place – the viewers’ experience. 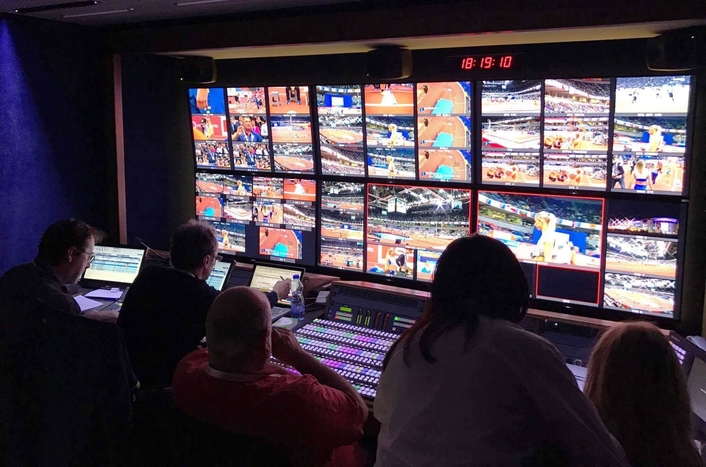 At the start of the project in early 2016 there was only a limited choice of vendors offering cameras with the HDR technology already implemented and not on the roadmap only. At that time Sony was the leader in the technology and Sony HDC-4300 cameras was a natural choice. The camera is all in-one for live sports production which is at the core of Croatel’s business. The truck is equipped with fourteen of these cameras and wired for sixteen. In addition to the cameras, Sony’s flagship XVS-8000 vision mixer was integrated to compliment the camera system. Crucially, it allows to mix live UHD 4K and HD pictures in parallel production. What is more, this video mixer enables IP live production via Networked Media Interface (NMI), an interface supported by a number of industry vendors’ looking into the future of IP. In order to compliment production an additional 2 M/E Sony mixer panel was integrated for an independent program production utilizing the same core processing. Overall, the OB van has 4 M/E for UHD 4K production. 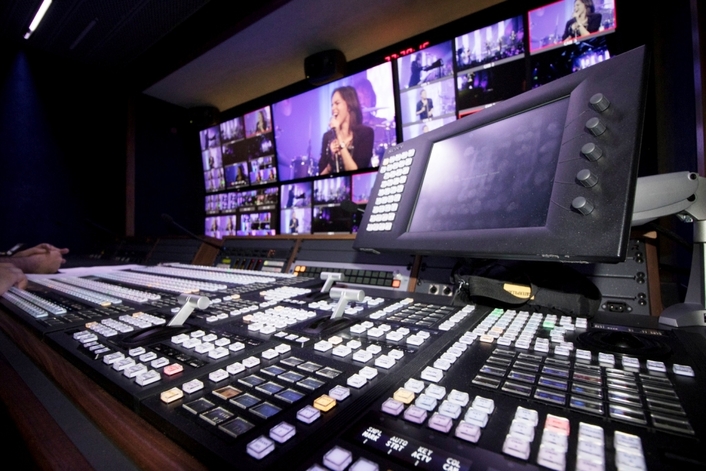 The 4-wire 4K technology was chosen for system interconnections and this choice was mainly dictated by the camera system selected. Though cumbersome this technology is by far the most robust, economical and provides necessary bandwidth for production with uncompressed images. The wiring of OB van of this size even in HD technology may already be of extensively large scope. For the 4-wire 4K multiply the scope by four, which is an immense work for an integrator. As an example, patching sixteen cameras alone occupies two standard 2x32 patch panels. An agreement on common IP standard for improving interconnections of 4K production is crucial in the future in order to make the UHD 4K a viable production format. 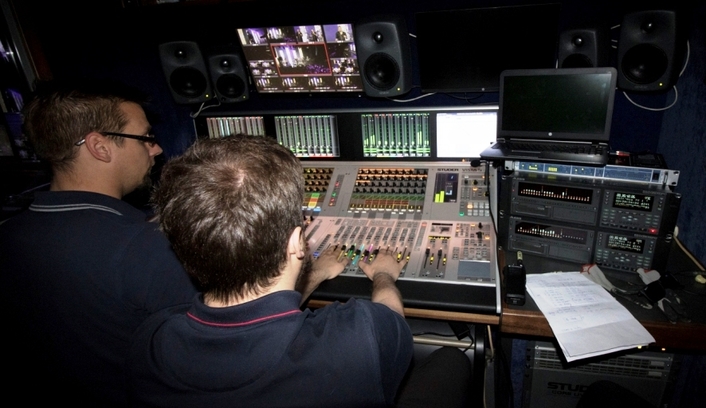 At the centre of all interconnections sits the Evertz EQX Series 288 x 576 (3G-HD) flagship video router. It is one of the most flexible video routers in the industry, providing multiple signal processing capabilities within the router itself. In our case it is equipped with 32 embedders (3G-HD) and 36 deembedders/Frame sync cards, which helped save significantly on implementation costs. Most importantly, Evertz router provides necessary interoperability interfaces for other system components. Both Sony and Evertz support the development of NMI interface. The router and switcher are connected via NMI providing the future proof interface to bridge video over IP connections immediately when necessary and without any hassle.  In addition, interconnection of all audio connections between router and Studer Vista V audio mixer were simplified by A-link interface, which is developed by Studer and supported by Evertz. 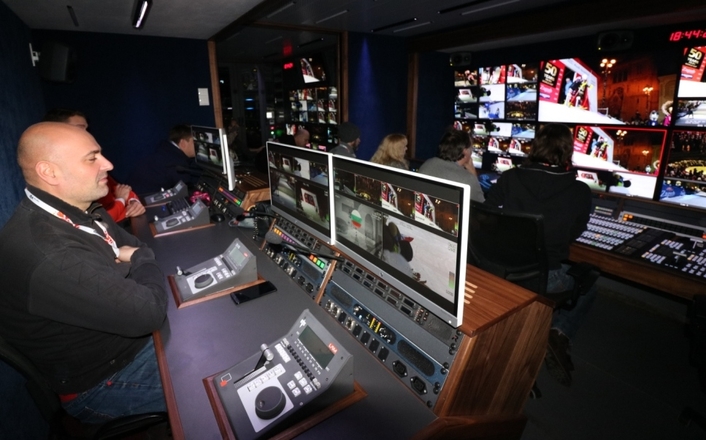 Production monitoring in Croatel OB5 is performed as a combination of 4K and HD. Evertz router is equipped with 4K multiviewer outputs, which are fed to 6x Sony Pro Bravia displays in the production area and converted to HDMI 2.0 with AJA’s Hi-5 4K mini-converters at the monitor side. The same is provided to the secondary production position in the engineering area for 2x Sony Pro Bravia displays. 4K monitoring is now widely utilized even in HD environments, providing producers with much sharper images and greatly improved working conditions. In order to simplify installation and cost vision control is performed in HD with Sony’s PVMA 17-inch OLED monitors at each camera control position and in 4K with a single Sony’s flagship BVM X300 30″ 4K OLED master monitor overseeing all camera control positions with 4K signals fed from the router. 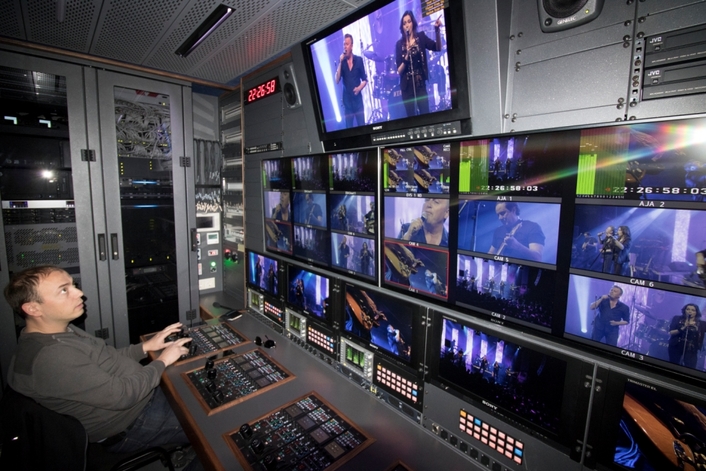 A critical component of the UHD 4K system design is system management. The OB van needs to be often reconfigured for different venues and production requirements. An additional component is provided for set-up configurations from HD to 4K and vice versa. This is where Lawo’s virtual studio manager VSM does its magic. It enhances flexibility and set-up time of any system, but it is especially advantageous when it comes to reconfiguring all system components from one video format to another for various production requirements and venues. It was obvious from the start of the project that a specialized management system taking care of this aspect will be necessary to make system configuration a bliss and not a burden. If before it was a nice-to-have system component, it is now a must-to-have in order to make a 4K OB van a viable investment. 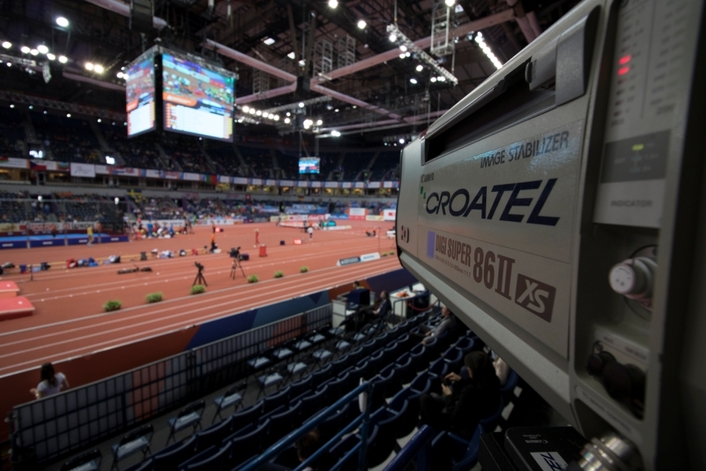 Mechanically OB5 was developed as an overall system component from the very start. Critical mechanical dimensions and solutions were based on the use of particular equipment. An expanding monitor wall was dimensioned to accommodate 3x 49-inch Sony monitors in the row. Make a mistake and you will be left with insufficient space. In order to provide large and easily accessible rack capacity which is mostly occupied by large number of EVS servers required for sports production TVC developed additional air conditioned and noise isolated rack space below vision control positions. Dedicated racks were foreseen for rack unit hungry Studer Vista V console in the audio production room. In additional, TVC designed and constructed rack doors for quick access to and easy removal of equipment, which is an important feature for production companies changing equipment from one van to the other on a frequent basis. 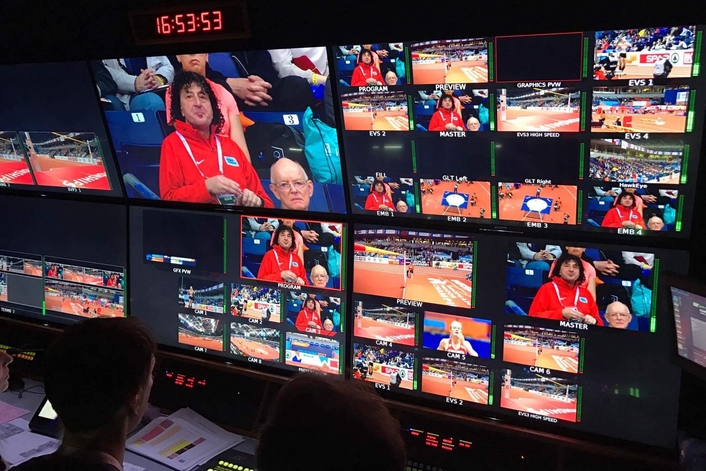 Overall, mechanically UHD OB5 is similar to HD OB3, the first OB van that TVC made for Croatel back in 2013. It is a 12 meter long OB van built on Volvo FM chassis and equipped with two expanding sides. The introduction of the second smaller expanding side for production monitor wall was significant change and necessary improvement. It provides a larger distance to the monitor wall providing improved overview of all video sources while 4K monitors and picture provides sharper source images. All this combined significantly improves working conditions for producer and production team. The layout developed in partnership with Croatel for OB3 has become a trademark of and bestseller for TVC. Since 2013 seven OB vans were produced by TVC utilizing this design. It proved to be a simple, attractive and ergonomic environment for the most demanding top-class sports production.

Building the UHD 4K OB van required top class engineering skills, team effort and project management. At that time TVC and Croatel engineers worked to develop system solution utilizing components that were so fresh that they were not even officially available on vendors’ sites. Testing and troubleshooting was a key part of system implementation more than ever. Ensuring proper communication between all stakeholders was critical to complete the system integration and meet the set deadline and budget. From start to finish developing Croatel OB5 4K was not simply another project, it was a challenge that was enjoyed by everyone involved, because it was both a technical and creative effort. Looking at the current developments in the 4K environment it is clear that these skills will be important for quite some time in the future while the broadcast industry establishes common standards for 4K production.

CROATEL offers services for the professional outside broadcast and satellite communication, company has been active on the market for over 20 years and currently has 66 employees. CROATEL owns five (5) HD OB vans for HD production of UEFA Champions League and Europa Football League and is also responsible for realization of all Croatian Football League games. CROATEL‘s main business activity is HDTV production, as well as ownership, realization and 24/7 service of HDTV playout system (facility) that broadcasts 6 HD sport channels on the territory of Croatia.