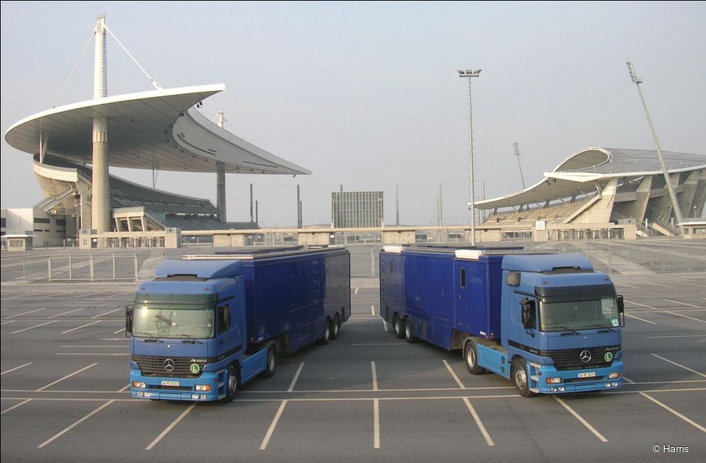 Dogan TV OB trucks are ready for action outside Istanbul's Ataturk Stadium
Dogan TV Holding is one of the largest broadcasting companies in Turkey and owns three leading Turkish TV channels (Kanal D, Star TV and CNNTurk). Dogan TV also runs a digital platform with 67 channels, including four HD channels, and handles the live broadcasting of almost all international sporting events to the Turkish market. At its headquarters in Istanbul, Dogan TV has two HD studios and seven SD studios — including HD and SD control rooms — and operates its own in-house productions (series, talk shows, contests, etc.) for transmission to its HD channels. Dogan TV also runs a Satellite News Gathering (SNG) fleet of 14 units and an Outside Broadcast (OB) fleet of four units. 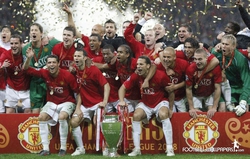 Recently, Dogan TV sought to upgrade its mobile fleet by adding a new HD-capable OB van — the HD OBVan 3. A key requirement for the new van was the ability to handle both SD and HD production. The main components of the truck were to include multiviewers, routers and signal processing technology — and all of the equipment needed to work seamlessly together. Multiviewers were one of the most important elements in the truck design, and Dogan required a multiviewer solution that enabled dynamic graphics and superior redundancy for missioncritical operations, yet was well-suited to the demands of spacerestricted environments. The timely completion of the new truck was of critical importance to Dogan TV because all broadcasters are requested to provide coverage of the UEFA Champions League matches in high definition by the end of 2009. As the host broadcaster for all home-ground UEFA Champions League and UEFA Cup matches in Turkey, Dogan TV needed to partner with a trusted manufacturer in order to ensure HD OBVan 3 would be operational quickly. 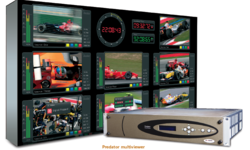 The HD OBVan 3 allows Dogan TV to handle HD and SD production with up to 24 cameras, eight independent video inputs, six composite SD or HD video outputs and 10 SD/HD video outputs. A Harris® Platinum™ router (128x256) connects to eight X75™ all-in-one processors, which combine video and audio processing capabilities with the ability to upconvert, downconvert, and cross-convert from most input video formats to almost any output video format. The X75 handles both standard- and high-definition signals. Multiviewers play a particularly important role in enabling outside broadcasts by Dogan TV. The van includes 12 Harris Predator™ HD multiviewers connected to 24 LCD monitors, allowing Dogan TV to monitor all signals coming into and leaving the OB truck. Each Predator multiviewer enables the monitoring of up to eight HD inputs. A key feature of the Predator multiviewer is the Z-Configurator™ software, which allows Dogan TV to edit the layouts dynamically over one or two screens and is very useful in the context of live broadcasting, which requires highly reactive response. In the production area, a group of Predator multiviewers is responsible for monitoring the signals from camera sources and server inputs and outputs, as well as external feeds. Two of the multiviewers are connected to four screens, monitoring the incoming feed of 16 cameras. Two more are dedicated to monitoring the feeds from six servers, VTRs and character generators over four screens, and one multiviewer monitors eight external sources over two screens. Dogan TV also has an extra Predator multiviewer on stand-by for use during 24-camera productions. In the vision area, two Predator multiviewers handle the feed of 16 cameras over four screens, and these enable the monitoring of technical aspects of camera control. In the slow-motion area, three multiviewers handle the inputs from six slow-motion servers over six screens. Finally, in the audio area, one Predator multiviewer is used to monitor any eight sources over two screens. Dogan TV is also using Harris 6800+™ core processing technology in the truck, including up- and downconverters, multiplexers/demultiplexers and distribution amplifiers. For test and measurement, four Videotek® TVM-900 multiformat signal analyzers enable Dogan TV to present waveform, vector, gamut, audio, picture timing and optional data analyzer screens, each of which can be viewed in any quadrant. Dogan TV is also running two VSG-410 video and audio signal generators, which can be used both as test signal generators and as master time generators.

Dogan TV’s new OB van has enabled the company to cover — in high definition — all UEFA Champion’s League and UEFA Cup matches that have taken place in Turkey since the beginning of the 2009-2010 season. The OB van was parked at the Ali Sami Yen Stadium in Istanbul on February 26, 2009, for the production and transmission of the Galatasaray vs. Bordeaux UEFA Cup match. And on March 19, the truck covered the Galatasaray vs. Hamburg UEFA Cup match. Dogan TV also transmitted live from the Sony Ericsson Women’s Tennis Association (WTA) Tour, where the Istanbul Cup took place July 27 to August 2. Dogan TV will also be covering the final round of the 2009 Men’s European Volleyball Championship in Istanbul and Izmir, from September 3-13. Harris technology is fast becoming the preferred choice for OB vehicle designers, such as Dogan TV, for many reasons: • The Harris products installed in HD OBVan 3 are all extremely robust and reliable — critical attributes for equipment installed on a vehicle often required to travel long distances and perform dependably during live broadcasts. The Harris products are also well integrated, and the multiviewers work seamlessly with the router, signal processing technology and test and measurement equipment. • The superior processing technology in the Predator multiviewer enables immediate system startup so that monitoring can begin as soon as the unit is powered up. The multiviewers also feature native HD input processing and the lowest minimum frame delays (<1 frame) from source to output, providing superior control and excellent images (true HD-quality images, dynamic graphics, auto-detection of SDI or HD sources and a true HD output to 1080p). • The flexibility of the Predator multiviewer technology enables a much more efficient monitor-wall design, and it is very easy to configure the monitor wall to match the needs of any event. This reduces costly setup delays — very important as each new outside broadcast event brings different production monitoring requirements. • As the Predator multiviewers are connected to slim-line LCD monitors, Dogan TV reaps the benefits of more space inside the van and dramatically reduced energy consumption (when compared to the use of CRT monitors).