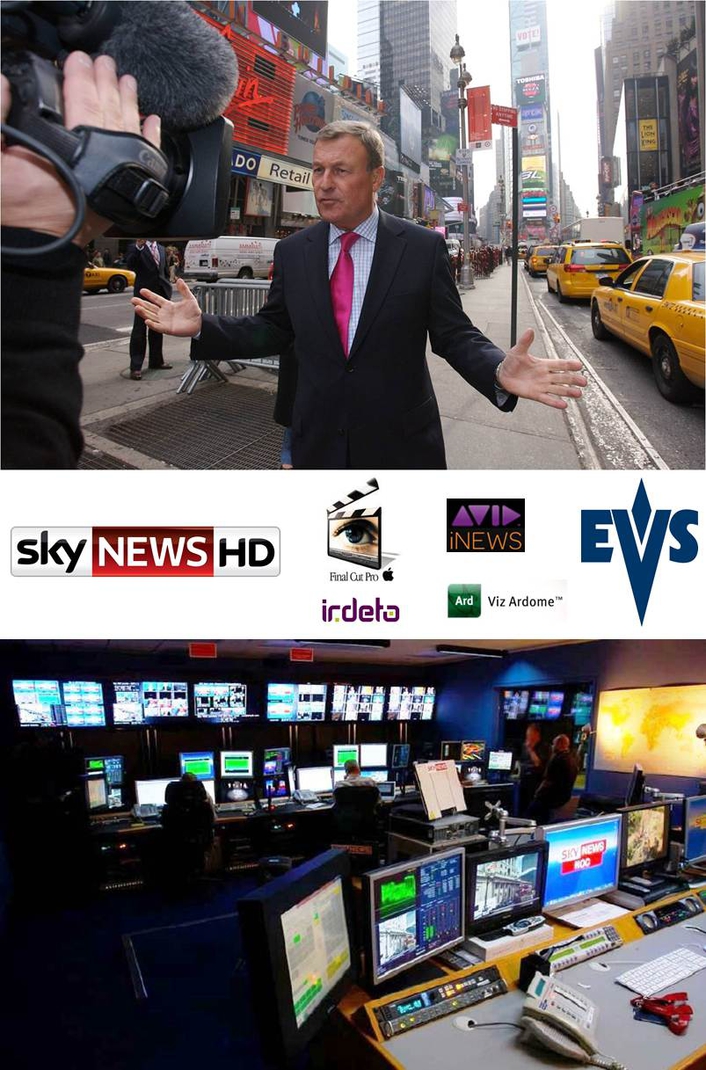 Xedio CleanEdit stations were given to the on-air news journalists and to key specialist areas, such as sport and business

“This was a massive project, which required a rigorous examination of many different systems, so when the new channel finally went on air, I knew immediately that all the effort we had made was starting to pay off”
Bevan Gibson, Deputy Head of Technology at SkyNews

SkyNews is a 24-hour domestic and international satellite television news broadcaster. It was launched in 1989 and has established itself as a world-class breaking news service with a spirit for innovation. It currently provides news to around 145 million people in 36 countries in Europe alone, with distribution across Africa, the Middle East and Asia.

Although owned by British Sky Broadcasting (BSkyB), SkyNews is partially-owned by Rupert Murdoch’s News Corporation, which holds a minority stake in BSkyB. The station’s headquarters are in Osterley, West London, employing well over 50 on-screen staff (anchors, correspondents and reporters) and over 600 behind-the-scenes staff. Sky News has eight of its own bureaux outside the United Kingdom and shares many more with other News Corporation networks.

After the successful HD broadcast on the Sky Satellite platform and HD online streaming of Barack Obama’s inauguration in January 2009, as well as an increasing customer demand for high quality programming with the intensity and vividness of HD, there was a collective view at Sky News to launch a permanent HD news channel.

At 9PM on Thursday, 6 May, in time for the 2010 General Election results, Sky News HD was launched. That evening, it became the first UK news channel to broadcast in HD. “This was a massive project, which required a rigorous examination of many different systems,” explains Bevan Gibson, Deputy Head of Technology at Sky News. “So when the new channel finally went on air, I knew immediately that all the effort we had made was starting to pay off”.

To provide HD broadcasts, SkyNews needed to introduce new technology at its headquarters in West London and upgrade its Central London studio as well as several bureaux both in the UK and around the world. The project required a set up in which the entire production workflow, from field to playout, is in full HD and based on tapeless technology. The selected technology also had to be fast and open to third-party systems for graphics, archiving, asset management and post-production. 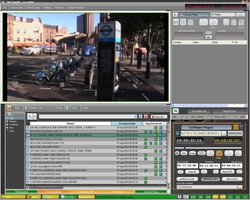 “At SkyNews we pride ourselves in being the first to break the news, so we decided to replace the previous equipment with a single tapeless solution that would guarantee speed and lead to significant enhancement across Sky’s operation, such as improving day-to-day newsgathering through better integration between headquarters, field teams and the bureaux, but also getting news output onto multiple platforms quicker,” says Bevan Gibson.

As a multi-platform news provider Sky requested technology that would allow it to easily link up people with its news at all times and wherever they may be. This implied the distribution of news not only to Sky News television viewers, but also online via skynews.com, on the radio, on mobile phones (including iPhones), on UK train platforms, Virgin Atlantic flights and via a ticker tape in Piccadilly Circus.

Finally, the satellite broadcaster’s existing SD infrastructure needed to be replaced with the new HD set up while the channel remained on air. “Introducing HD without compromising the exiting SD service was a challenge, as we did not want the viewers to notice or the journalists’ jobs to be affected,” adds Bevan Gibson.

The new HD channel is supported by a full tapeless workflow based on EVS technology, which includes A/V production servers, varying software applications for browsing and editing, online media storage, as well as content management and networking solutions.

There are around 40 lines dedicated to the incoming feeds, which are recorded in High Definition. There are around 20 recording lines in ingest set permanently in loop recording mode, so feeds can be protected and named. Ingest is made with EVS XS servers that are controlled by IPDirector software via several workstations. XL[2] proxy servers provide instant access to live record trains in Lo-Res format without the need for scheduled ingests.

Footage from Sky News ENG crews is shot in 1080i DVCPROHD 100 and maintained as such through the entire production process to avoid time-consuming file conversions.

All feeds are sent to an EVS XStoreSAN, a 200TB+ near-line storage offering combined Gigabit Ethernet and fibre channel networks. Media content can then be instantly accessed through the entire network for production, editing and playout. Video can also be pushed to an Ardome library from Vizrt, Sky’s chosen Asset Management solution. Media managers working on the IPDirector workstations control what is held for production and what goes to the library.

In addition to ingest control, IPDirector software is used for browsing content and compiling clips. Over 200 IPDirector workstations are available for the bulk of the newsroom, as users browse incoming feeds and prepare rough-cut edits by creating simple playlists. The playlists can be pushed to EVS’ Xedio CleanEdit systems or Apple’s Final Cut Pro for further editing, or directly to playout if need be.

Xedio CleanEdit is a non-linear editing tool from EVS that offers timeline editing with no rendering required for fast turnaround news production. Journalists at Sky News use the software via a few dozen workstations to improve rough-cut edits by adding text and graphics, prepare news bulletins and reports, as well as voice-over recordings. Finished edits from Xedio CleanEdit can be pushed to playout or to Final Cut Pro for advanced editing.

Bevan Gibson explains: “We have given Xedio CleanEdit stations to the on-air news journalists and to key specialist areas, such as sport and business, to boost their ability to shape content, and to get material to air fast. The stations are also used by our online and multi-platform production teams who can carry out the majority of work without FCP”.

Sky News craft editors work with Final Cut Pro suites, which are fully integrated with EVS’ production servers and online storage solution. This implies that files can be readily exchanged between EVS systems and Final Cut Pro via the Ethernet network.

The high-end edit suite from Apple also uses a new EVS export plug-in to allow restores direct to a server as soon as Final Cut Pro starts rendering the files, meaning near-instant playout of files as soon as the edit is finished.

The 24-hour news broadcaster employs XS servers for playout operations. Playout at Sky News is fully redundant, with four main playout channels and two for backup. Also operating from the system are several of Sky’s interactive and online services, bringing the total number of playout channels to around 32.

Sky News also uses the new AB-Roll playlist application, organized by Avid iNews NRCS, to play out rundowns. The EVS software suite, IPDirector, integrates with iNews through MOS protocol support and the introduction of EVS’ new Active X plug-in database browser. NRCS operators can therefore access any EVS clip and associated metadata referenced in the IPDirector database, and add it with a simple drag and drop to the rundown list. In fact, the ActiveX browser allows the user to do search on any IPDirector database field. In addition, any running order managed from the iNews client interface is kept up to date on the IPDirector control panel, ensuring full control over the rundown of playlists in IPDirector.

A pair of LSM-XT[2]+ systems are used for live slow motion and time-slip operations, offering excellent abilities for fast-turnaround review of events as well as delaying live events so nothing is missed.

After playout, finished edits are pushed to the Vizrt Ardome library. Full metadata integration is available between EVS and Ardome, so nothing is lost when files are transferred.

EVS also integrates with Sky’s Web service, using the Irdeto platform. Again, metadata added in the EVS system is passed through to Irdeto to dictate which platform the file should be delivered to, and indicate the type of content in the file. 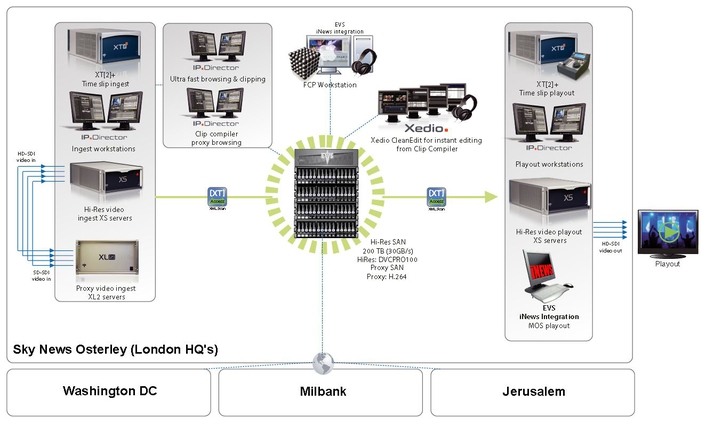