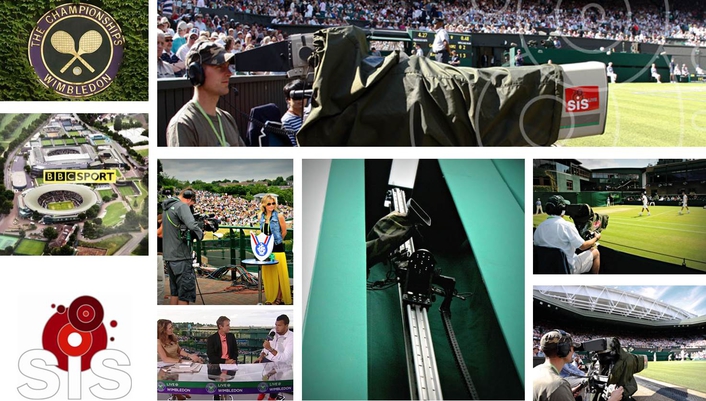 .
BBC Sport’s host coverage of The Wimbledon Championships continued in 2013, maintaining its tradition of delivering high quality, compelling and professionally produced television. The entire event was captured and broadcast again in high definition, with SIS LIVE providing technical facilities to BBC Sport and the All England Lawn Tennis Club (AELTC) throughout the two week event.

SIS LIVE provided all HD facilities to cover matches from nine full TV courts, each with its own production gallery, and with major courts managed from OB trucks. SIS LIVE provided four outside broadcast units including its flagship OB 1 unit, which produced the BBC domestic programme. In addition to the full spec TV courts there was also experimental coverage on Court 10 using auto tracking software driving remote heads. The 10 HD feeds were routed to OSCAR (On Site Central Apparatus Room) from where they were distributed to on site broadcasters and to the OB units outside for wider transmission. OB 1 received all court mixes from OSCAR allowing the director to control the on screen narrative of the championships, feathering in presentation spots from Sue Barker and John Inverdale in the studio. SIS LIVE’s OB units offer the latest audio and video recording and routing technologies, giving clients complete flexibility and reliability in a comfortable and spacious environments.

All court action arrived in OSCAR as a final feed suitable for transmission, so that any broadcaster in the world could simply select the match they wanted to cover, add their own voiceover, and broadcast. They also had the option to take a clean output and add graphics in their own language. In 2012 SIS LIVE built, integrated and managed a gallery to handle three camera feeds from the two media rooms where post-match interviews were conducted with the players.

A total of 28 EVS HD LSMs were used to record the court cameras and mixer feeds from all 9 televised courts enabling slow motion replays, including two super high speed X-Mo systems, to the court Directors. These were also available to the BBC domestic operation, broadcasting live on BBC1, BBC 2 and BBC Red Button. All the machines were networked together so any user could easily access hundreds of hours of footage. This offered a seamless and tapeless workflow from ingest to transmission and finally to a disk based archive. This network also included connectivity to a 47TB SAN server, with seven Final Cut Pro edit stations and ingest positions affording any producer immediate access to any footage on the system.

SIS LIVE provided over 80 HD cameras across the site, including 11 slow-motion cameras and 3 HD radio cameras. Most outside courts were generally covered using a minimum of three cameras, with that number rising for more important courts and as the tournament progressed. In week two of the Championships a number of facilities were redistributed from outside courts to bolster coverage on the main courts. This included the addition of an extra slo-mo camera on Centre Court to provide an additional replay angle of the final stages of the tournament. Around 20 cameras were used on Centre for the finals.

2013 saw the introduction of a new Tower Cam system, a vertical tracking camera designed, developed and manufactured by the SIS LIVE special cameras team, installed next to the big screen in front of Murray Mount. This provided tracking shots of the crowd reaction to big moments in the tournament offering additional angles for directors to incorporate into the programme, alongside the existing jimmy jib system. This system was remotely operated from the air conditioned comfort of one of the production vehicles.

Beauty shots of the rapidly evolving London skyline are captured from a 70m hoist and added into the mix. In total, 80 kilometres (50 miles) of HD capable cabling was laid across the site to connect these multiple feeds. 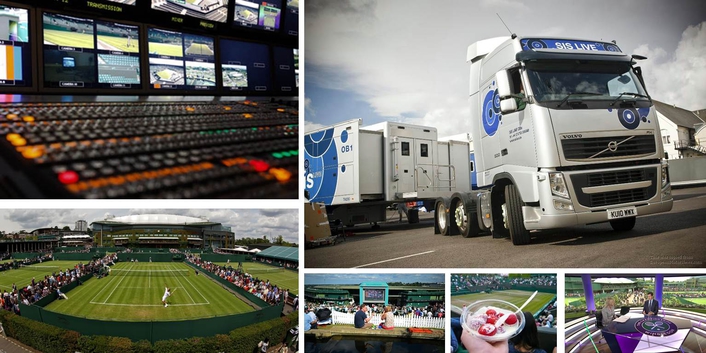 On 4th July SIS LIVE provided facilities for Blue Peter transmissions from the roof of the broadcast centre which overlooks the outside courts at Wimbledon. Presenters Barney Harwood and Helen Skelton were filmed using three cameras which were sent via fibre as individual feeds up to BBC studios in Salford where the programme was created. A producer, script supervisor and floor manager oversaw the on site presentation with one of SIS LIVE’s sound engineers creating the audio mix from site. A complex communications network was set up by SIS LIVE to ensure robust and instant communications between the two sites. This type of ‘remote’ production is becoming increasingly popular as it saves the entire production team travelling down to site, and makes more efficient use of centralised facilities. This is just one example of a host of additional services which SIS LIVE are able to provide on request to clients.

Alan Wright, Engineering Manager, SIS LIVE, says “Wimbledon is one of the highlights of the summer and it is our job to make sure that an event of this calibre has all the right kit and that everything runs smoothly. We supplied a large number of experienced staff to set up and deliver the tournament, and it was a logistical feat to make sure everything worked as well as it did.”

David Meynell, Managing Director, SIS LIVE, said: “Wimbledon is the world’s most prestigious tennis tournament and we are pleased to be able to support it by offering a fully managed broadcast solution, and to continue working with the AELTC and the BBC to develop the coverage year after year.”