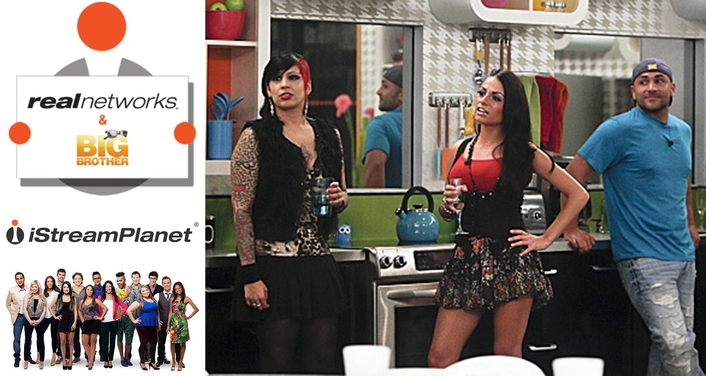 .
As the reality show Big Brother enters its 14th season on the CBS television network, RealNetworks once again relies on iStreamPlanet to provide multi-camera, 24/7, live streaming from the Big Brother house to subscribers of its SuperPass service. The live, online broadcast is a hit with Big Brother fans, providing them a constant stream of entertainment that they can’t get from the TV show. This always-on entertainment pulls viewers deeper into the show and RealNetworks’ community-fueled content.

Introduction
For the past three years RealNetworks has turned to iStreamPlanet to provide live streaming of video feeds from the Big Brother house in Los Angeles to a devoted and connected fan base. This case study details RealNetworks’ community-focused approach to the online broadcast and explores the services iStreamPlanet provides to ensure fans are getting all the Big Brother entertainment they can handle, 24 hours a day, seven days a week for three months.Keeping the Fans Engaged

RealNetworks has been providing live video streams from the Big Brother House in partnership with CBS for the past 12 years. iStreamPlanet has been powering the streaming broadcast for the past three years.“I remember watching the hockey finals streaming live online during the 2010 Vancouver Olympics. I could see the reflection of the players in the glass around the rink. When I saw that streaming video quality I knew that’s who I wanted to stream Big Brother for us,” said Matt Calder, Senior Product Manager for RealNetworks.

The online broadcast of Big Brother is a key part of RealNetwork’s premium subscription service, SuperPass. For $14.99 a month, subscribers have access to reality show content not available on the traditional broadcast, including 24/7 live feeds from the Big Brother house, contests, live social feeds, chat rooms and more.

Delivering a live, online broadcast, uninterrupted for three months is not an easy feat, especially under the watchful eyes of the show’s extreme fans.

“If the feeds go down, our fans get upset, to say the least,” said Matt Calder. “We used to have to do restarts pretty frequently to fix issues like audio getting out of sync. We’ve worked with iStreamPlanet to minimize the number of restarts, so viewing is uninterrupted and that keeps our customers extremely happy.”

“We have automated systems monitoring our encoders. We also have proactive human monitoring,” said Mark East, Senior Director of Broadcast Operations for iStreamPlanet. “We’ve got the team working on a rotating schedule so every minute of every day someone is watching to make sure all the feeds are broadcasting properly.”

The first thing you’ll notice when you tune into the live feeds is the split screen, user controlled player. The split screen shows the four live cameras that are always rolling. There’s also a fifth stream which provides the four camera thumbnails that are always visible on the left side of the player. This allows the user to keep an eye on all the action, no matter which camera is chosen for their main screen.

“That fifth stream was a little tricky,” said Mark East of iStreamPlanet. “We had to figure out how to package those four feeds into one stream and have it play within a reasonable bandwidth.”

One of the interesting features RealNetworks added to the split screen experience is audio.

Live Video Workflow
There are a number of steps in the live video workflow, from acquisition to analytics, which are behind the online Big Brother broadcast provided to SuperPass customers.

Encoding
iStreamPlanet takes the ASI stream and decodes it into four Sencore MRD decoders, extracting each of the four feeds individually from the ASI package.

“From there, we use our proprietary workflow platform for scheduling, automating and routing those four incoming feeds to generate three full screen views and the fourth quad-split view, plus a single stream of the thumbnail strip that enables viewers to see what’s happening in each view, and select the view of their choice,” explained Mark East. “RealNetworks wanted to maximize the reach by making the bandwidth requirements as low as possible. A lot of work goes into this, including handling that thumbnail strip. Using a six bit rate adaptive bitrate (ABR) custom profile, we’re able to efficiently deliver the right stream, to the right device, matched to the bandwidth.”

The streams are published to Akamai’s HD Network. The streams are transmuxed, or transcoded, on the server side to the HLS format and Adobe True HTTP Streaming so they can be accessed by iOS and Android devices.

Analytics and Viewership
A big benefit of the extensive online broadcasting is the intelligence that RealNetworks has gathered about its top fans. By analyzing the activity of customers accessing the live streams, RealNetworks can identify the inflection points in the Big Brother story, and they can also see their audience’s evolving viewing habits.

“We expected our mobile traffic to be quite spikey, and you can clearly see that when a big event happens fans jump on right away with their phones and tablets,” said Calder, “but we have been surprised at the range of devices they are using, and the various patterns of engagement by device.”