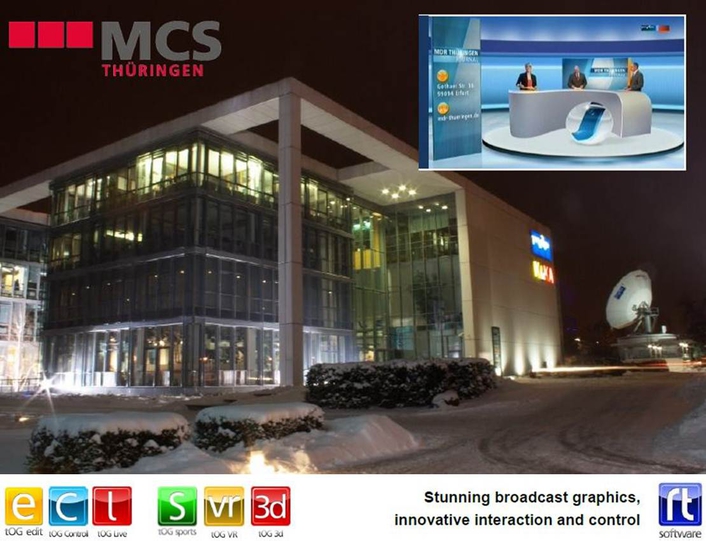 MDR Landesfunkaus in Thüringen
Together MCS, MCR LFH Thüringen, RT Software Ltd., and Chyron GmbH made it possible for the daily newscast Thüringen MDR to successfully go on air with a new Virtual Reality set on the 1st of June 2012. An overview of the studio technology involved and the operation of the VR-System is detailed in this case study.

Solution
MCS worked with RT Software Ltd. and Chyron GmbH to successfully implement a high quality virtual reality studio, taking the daily MDR Thüringen program to air for the first time on the 1st June 2012. The project took less than 4 months from order placement to solution commissioning. The editorial office of the MDR Thüringen Journal is extremely satisfied with the presentation of their news magazine, with RT Software having taken the MCS graphic designs and successfully made them into a high quality, high reliability and easy to control VR set.

Introduction
Media & Communication Systems (MCS) Thüringen GmbH is a Broadcast and Television service provider with the knowledge, creativity and the right approach to realize television and radio productions of the highest quality. It deals with the installation and maintenance of technical and infrastructural facilities for its own and/or third-party productions which are involved in film, television and radio, and the management of corresponding personnel and organizational capacities.

MCS provides production and technical services to clients from all over Germany, including to the Landesfunkhaus (LFH) Thuringia region of the Mitteldeutscher Rundfunk (Central German Broadcasting, MDR) in Erfurt and the Children`s Broadcast Station (KiKa) of ARD and ZDF. RT Software Ltd is a UK based supplier of high quality real-time 3D graphics. Their BAFTA award winning founders spent many years working for the Computer Graphics department at the BBC. Formed in 2004 their tOG graphics engine now drives a family of products that range from sports telestration, virtual and augmented reality, touch tables and screen as well as more traditional real time 3D graphics for news, elections and entertainment shows.

RT Software systems are in use at many of the top broadcasters in the world, such as the BBC including BBC Wales and Scotland, ITV, SKY in the UK along with Australia and New Zealand, Premier League Productions, ESPN and HBO. RT Software is building on its experience with excellence.

Virtual Reality Studio Physical Preparation
The first step in the project implementation was for MCS to prepare the physical studio to be ready for high quality VR set operation.
The studio floor was evened out to facilitate the smooth movement of two new fully robotic pedestals that were to be used. With each weighing about 250kg and resting on only 3 wheels, the floor also needed to be robust. A careful process of drying and curing the floor was therefore observed, followed by stress tests to confirm the studio floor`s load bearing capacity.

For the VR solution’s chroma keying, the floor and walls of the studio were painted blue and the studio walls covered with blue chromate cloth. Unlike regular cloth, chromate cloth has the advantage of not showing any signs of use, even after prolonged periods of time, and there are no dents or faults in the curves.
The existing studio lighting was improved using 4000k flat lights the background lighting and a single 500-W gradual lens for the effect lighting on the studio table. For further-background lighting, 5600k asymmetric flat lamps were also installed.

The existing studio-preview monitors, which are used by the presenters, were replaced with camera mounted multi viewer systems. The monitor holders on the camera pedestals were individually made, so to allow any kind of monitor to be used. Now the physical studio was ready for operation.

Virtual Studio Set Design
The editorial office of the MDR Thüringen Journal wanted a fresh and modern look and feel to their program. To achieve this goal the initial designs were prepared in an industry standard graphics package, and then real-time 3D templates created in tOG-Edit.

MCS graphical designers worked closely with the MDR Thüringen Journal editors to create an initial virtual reality set look and feel using Autodesk 3ds Max graphics package. Once they were happy with this initial design it was exported as a .fbx file ready for importing by tOG-Edit.

The RT software import from .fbx (probably the best in the industry) brought in all the geometries, textures, lighting, even animations and scene hierarchy that had been created by the MCS graphics designers in 3ds Max.

tOG-Edit then provided a user-friendly interface for the MCS graphical designer in which all objects that appear in the MDR Thüringen Journal scene could be manipulated directly with the mouse. The Interface, consisting of a main render area, object hierarchy list (scenegraph), editor stack and timeline, enabled the MCS graphics operators to optimize the 3D design for live processing. Special effects like mirroring, reflection, transparency were also added.

The result was a 3D template that can be manipulated in real-time by the tOG-VR solution, that was both modern as fresh just as the editorial office of the MDR Thüringen Journal had wanted. Now with the physical set prepared and the virtual reality set designed, it was time to build the tOG-VR system.

tOG-VR Virtual Reality System
At MDR LFH the RT Software tOG-VR system consists of three rendering engines running tOG-Live (one per camera) and two control PCs running tOG-Control. These are all built on industry standard IT hardware, making the solution cost-effective to implement, reliable and easy to support.

Tracking data from the two Shotoku Camera Pedestals are fed to two of the three rendering engines via RS-422 cables and RS-422-/RS-232-Adapter. tOG-VR adjusts the virtual reality set graphic in accordance with the camera position.

The third camera, which has no tracking sensors, uses the tOG-VR trackless-camera effects to allow, for example, a virtual camera flights that is not possible in reality.

Each rendering machine has 4 video inputs. The first is connected the camera feed. High quality chroma keying is performed within the tOG-VR software, with the MDR LFH visual technician checking and finely adjusting the chroma key prior to transition from either of the tOG-Control PCs. The remaining three video input slots are used for external video sources that can be introduced to the set. From each rendering machine the finished SDI feed (chroma keyed real presenters and furniture on eh virtual set) is available, as well as separate key and fill signals. The delay through the tOG-VR system is set at 7 frames. The whole system works in the 1080i /25 video standards.

Solution Summary
Media & Communication Systems GmbH (MCS) Thüringen were pleased with the speed and ease of the initial VR set project implementation with RT Software, and continue to be happy with its quality and reliability in on-going daily operations.

The editorial office of the MDR Thüringen Journal is also extremely satisfied with the modern and fresh program look and feel of their newsmagazine, with RT Software having taken the MCS graphic designs and successfully made them into a high quality, high reliability and easy to control VR set.

Key points to note from this installation include:
· Efficient VR Set design workflow: MCS graphics designers worked with MDR Thüringen Journal editors to create an virtual reality initially using Autodesk 3ds Max and then imported this as .fbx file into tOG-Edit to create a real-time 3D template.
· Open solution: tOG-VR has been proven to be an open solution, integrating easily with the tracking data from the two Shotoku TRP-100 fully robotic pedestals fitted with TG 18/19VR pan and tilt heads, and supporting high quality video inputs and outputs.
· IT-Based: MCS built the tOG-VR solution on off-the-shelf IT hardware, making it cost effective for MCS to both implement and support. The rendering machines were built on HP Z800 workstations with Linux operating systems and the control machine on Windows PCs.
· Ease-of-Use: From VR set-up tools such as easy lens calibration and chroma keying, to intuitive on-air VR operator tools, MCS/MDR has found the tOG-VR solution easy and reliable to use on air, controlling virtual graphics for to meet various MDR Thüringen Journal needs.
· High Quality: Most importantly, the MDR Thuringen editorial staff are delighted with the quality and reliability of their new tOG-VR solution. The combination of the modern and fresh look and feel, with exciting and engaging graphics has met and exceeded all expectation.