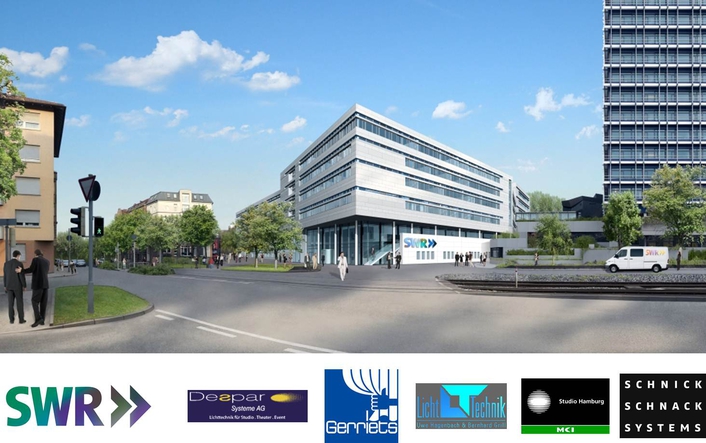 The most modern studio lighting technology for economic production processing
Introduction
Next to its broadcasting centre in Stuttgart, SWR built a new television studio complex with four production studios as a substitute for the “Villa Berg” studios, in operation since 1964. The new studios were completed in late 2011.

The studios are used for live broadcasts and pre-productions of SWR, studio C here with "virtual studio technology". Three control rooms for the studios A, B and C are available, studio D can be assigned to either one of these.

A special highlight of the equipment in the studios A, B and C is the cyclorama lighting

Studios A, B and C are equipped with an automatic lighting system with motorized position control, recording and reproduction, enabling extremely short setup times.

According to the requirements a manually operated studio lighting technology was implemented in studio D.

A special highlight of the equipment in the studios A, B and C is the cyclorama lighting with LED technology and additive RGB colour mixing in less than 25 cm from the rear projection screen. 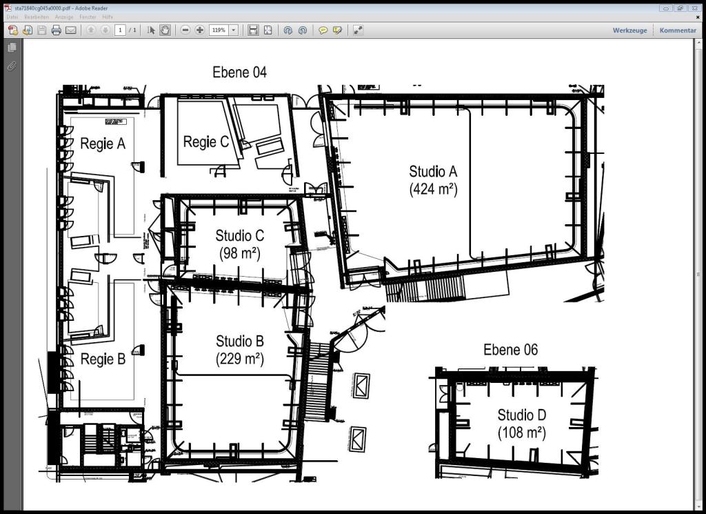 Floor plan studios A, B, C and D and the control galleries 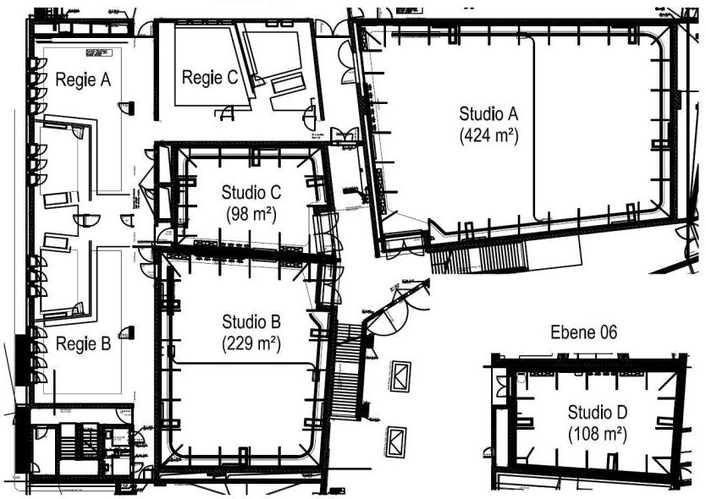 Floor plan studios A, B, C and D and the control galleries

The complete planning and implementation of the lighting systems was done in accordance with the preliminary plans and specifications of the SWR in close co-operation of the system houses Studio Hamburg MCI GmbH as prime contractor and Despar Systeme AG as project partner for studio lighting.

Infrastructure of the studio ceiling
In the two-shell constructed studios support structures are available on site, which assimilate in addition to the loads of the lighting also the air conditioning with convector cooling systems as well as the air supply and exhaust ducts. 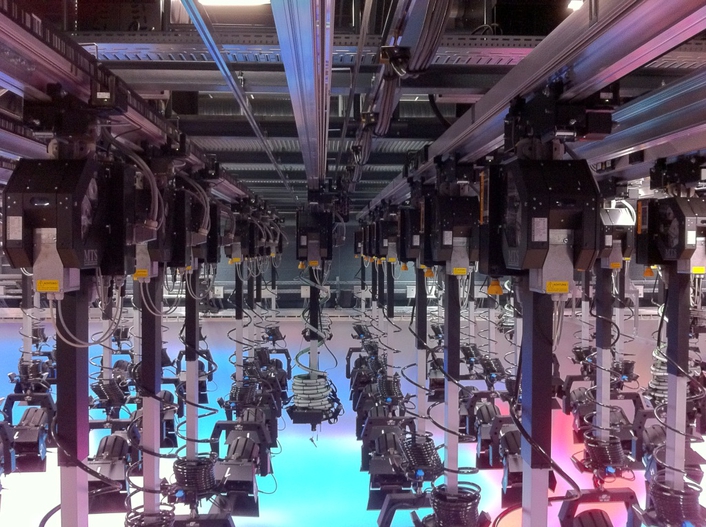 The telescope hangers with Fresnel lights and the scenery hoists are moved on the track systems TV-Track TT200 with two coupled 10-pole bus bars and are supplied with energy and the control signals for the motordrives as well as for the dimmer circuits.

Cyclorama rail systems and curtains
Three-lane cyclorama rail systems were installed and they are used for both the tensioned reflection screen of the LED background illumination as well as any other curtains. The two large studios may be devided with an additional rail across the studio centre with corresponding switch systems. Despar’s Cyclo-Track system was used here, amended by a lifting station.

Lighting hangers
A total of 255 telescopes are installed in the studios A to C, produced by MTS. These single point hangers are an integral part of the studio automation system. They meet the required quality and safety standards according to German DIN and accident-prevention regulations BGV C1 for working under moving and suspended loads. The telescopes are built with aluminium tubes and the motor drives for the vertical and the lateral movement are equipped with soft Start/stop function. The trolleys run in aluminium precision profiles and the positions are determined by code bars. 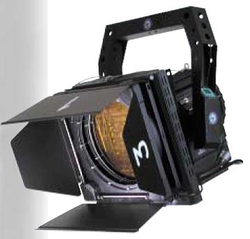 Studio luminaires
All the Fresnel spotlights in the studios A, B and C are motorised in all their functions, including the barndoors. The luminaires with their eight drives are adjusted remote-controlled via the control system which also memorises their final position.

1kW and 2kW luminaires equipped with tungsten halogen bulbs are used, most of them equipped with 1kW bulbs. This is sufficient in conjunction with today’s modern camera technology.

The luminaire motorisation was realized by Lichttechnik München.

LED lights were ruled out for these studios because the necessary well-proven units with the needed power and without cooling fans were not available yet for this project.

Studio automation
Since all positions of the lights’ and telescopes’ as well as the scenery hoists’ motor drives are recorded digitally, they can be stored production-related and reproduced as needed. This method is the latest technology for modern studios with recurring types of broadcasts, it saves a lot of time and of course staff. In addition, corrections can be made during the rehearsals or even during broadcasting or recording. 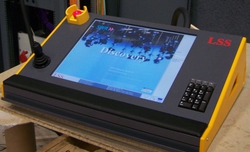 For this LSS’s introduced ‘Discovery’ positioning system was selected. It is operated via a mobile studio desk with graphical user interface and touch screen operation. The desks of the three studios are programmed alike so they can be exchanged at need. The decentralized system architecture consists of rail controllers and for each telescope a control box. The control signals between the rail controllers and the individual boxes are transmitted via an industrial data bus. 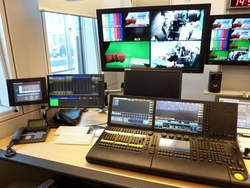 The dimmer cabinets type ‘grandMA dim’ use well proven Thyristor techniques and dual processor operation. The cabinets are arranged in dimmer rooms for reasons of service accessibility and the high demands on studio acoustics.

This was achieved by adjusting Despar’s newly designed LED tube profiles to the projection screen’s bulge in conjunction with specially designed tensioning devices. The tubes can be set at a constant distance from the projection foil over the entire height (6 m). The tensioning device is accessible above the cyclorama rail so that the adjusting can be done after the assembly of the tensioned screen. This also applies in case of service since the Cyclo-LED profiles can be removed to the top and replaced individually without the use of tools.

The adjustable distance of the LED frame to the projection screen from just 16 to 25 cm compared to previous solutions with coloured fluorescent lamps and a distance of at least 1.00 m -1.20 m results in a substantial increase in the studio’s playing area.

After extensive testing of SWR the ‘Transmission’ foil produced by Gerriets was selected particularly suited as the projection foil. A high luminance factor and a good transmittance ensure very good projection results with even light distribution.

Regarding the LEDs the well-proven products of Schnickschnack Systems were used. The intelligent LED strips with only 0.3 W per LED are supplied and controlled via system power supplies. This entire system allows an adjustment of the RGB LEDs down to the individual LED via the data cabling. The pixel grid of LED walls is 10 cm which is sufficient for the design tasks.

The LED panels are controlled via the lighting control desks and media servers, and any homogeneous and dynamic colour designs as well as projections of graphics and video content are possible. SWR’s staff had already made good experiences with the operation of existing modern lighting control desks enabling the implementation of the LED background illumination with corresponding training without any problems.

For the coupling of the network components in the two dimming rooms GR 8 (studio A and C) and GR11 (studio B and D) glass fibre links were used, as well as for connecting the outputs of the media servers to the system power supplies of the LED technology with ARTnet.

Additionally there is a glass fibre link to the service area of SWR’s lighting team.

Main distribution and harmonics compensation
The individual units of the studios are equipped with motorised power switches in the main distributions and can be remote-controlled and monitored by ISYGLT touch-control panels in the control rooms or in the studios. An interface to the utility management allows remote monitoring.

Active harmonic filters ‘ECOsine Active’ are used for active compensation of reactive power and harmonic content and for load balancing.

Failure control
The studios are used for live broadcasts or live recordings. Therefor a high availability of the entire studio lighting technology is essential. This is achieved by using dual processors in the dimmer cabinets, optional coupling of lighting and control desks as well as media servers to the studios, DMX back-up routes and sufficient spare parts.

Conclusion
With the modern lighting infrastructure of the new studios of SWR’s location Stuttgart technical solutions with high quality and well-proven systems and devices are available that not only represent the state of the art but also ensure decades of economic and creatively challenging use of the studios.