NDI® Brings The World To Hubcast Media’s Back Yard

Say you’ve built up a name for yourself producing international live events. You’ve conquered new locations, traversed time zones in both directions, and dragged cables across the international date line on New Year’s Eve to party like it’s 1999. You’ve spent years traveling the globe with literal boatloads of cumbersome production gear. There’s still a world of live events and content out there to produce. How do you choose where on earth to go next?

That’s easy, says Hubcast CEO Peter Young: “With NewTek NDI, we can bring the world back to us.”

Young’s company, Hubcast Media Productions, develops and produces a wide variety of live events, broadcasts and video projects from its home base in Surrey, British Columbia. Though the Canadian municipality is technically part of the bustling Vancouver metropolitan region, parts of Surrey itself are quite rural. 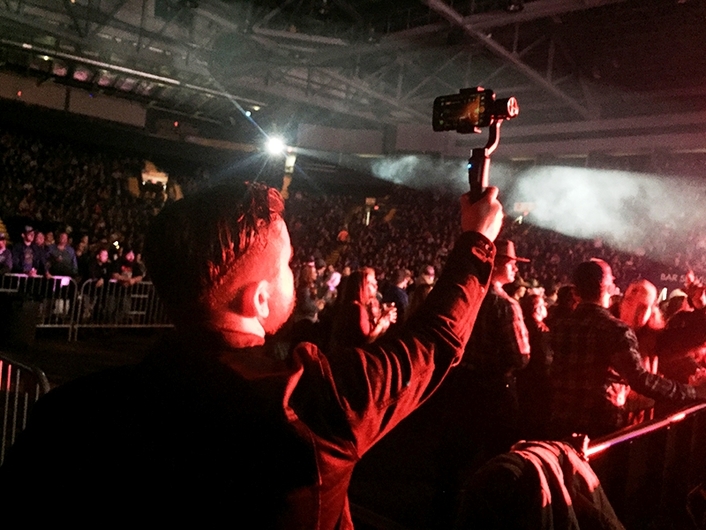 Not that this matters to the Hubcast crew when it comes to producing events. As far as they’re concerned, they could be anywhere.

That’s because the company has centralized its remote production inside the facility, eliminating monolithic on-location installations (its tagline: “leave the truck in the yard”) and instead using IP networks to deliver synced, live signals from remote cameras into the workflow, ready for switching in real time.

“We are actually covering multi-camera events around the world and bringing them back into our control room,” Young says. “We’re doing it with NewTek’s NDI technology, and we’re doing it at a scale that, until recently, has not been achievable.” 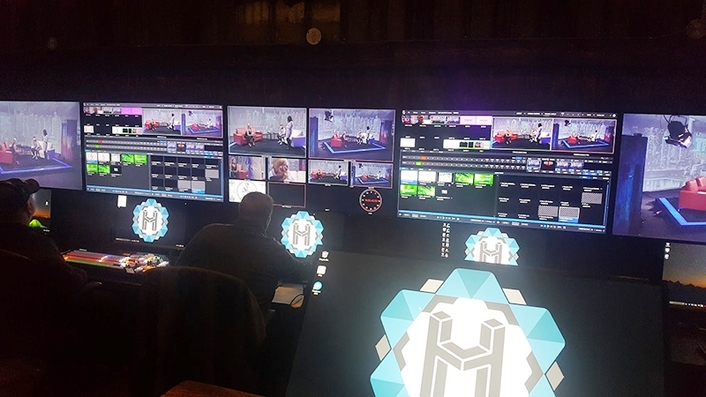 The scale that Young refers to can be anything from nationwide to cross-border to global. These days, with his company’s unique remote workflow – for which he adopted the term HUBcasting™ – he’s able to stay fairly close to home to achieve it, but that was not always the case.

As a sound tech earlier in his career, and then as an equipment rental proprietor, he toured nationally with bands and festivals.

As a technical production director, he staged international live events in what he calls “unique” locations: TD’ing a Y2K event aboard a chartered ship at the international date line in the Antarctic, the first place in the world to experience the new millennium. Craning the event’s production equipment into the cruise ship swimming pool to safely cross the Drake passage, widely regarded as the roughest ocean in the world. Young has produced live events around the world, including aboard this ship celebrating the turn of the millennium

As a production company owner, recording the Pepsi Music Festival in Buenos Aires and witnessing the way Megadeth’s lead singer captivated the audience on metal night – which happened to be the experience that set him on the path of live production that he’s on now with Hubcast. 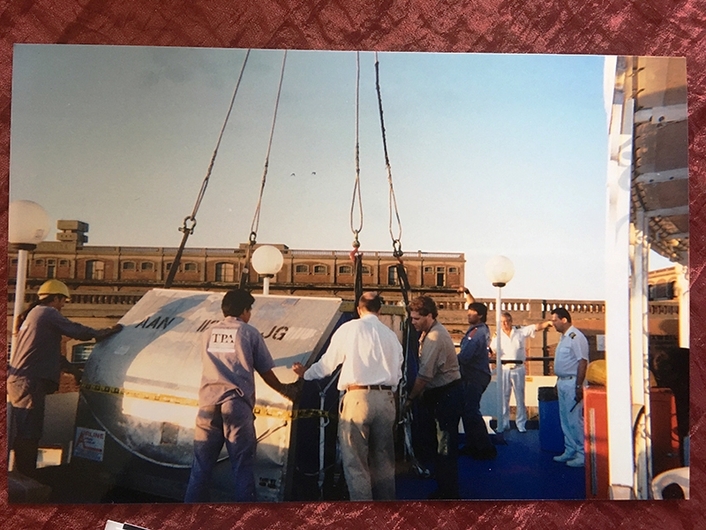 Before IP video, Young would transport an entire production infrastructure to events around the world

“This industry has always been looking for better ways to serve a relationship to an end user,” says Young. “Dave Mustaine’s fans were so passionate that night, even during his rhythm guitar parts, the whole crowd would take over by singing the parts with him as he played, and the energy was just unbelievable.” The video company that produced the DVD for the event captured the energy so vividly and even named the production That One Night, seemingly in recognition of the magical moments it evoked, he says – “and it made me proud to be a part of it.”

Young said to himself, “if there’s a way that we can capture this live, and take that beyond the four walls of a facility and a venue - that’s what people want to connect with.” In turn, he thought, event producers could transform that connection into an additional channel for engagement and ultimately monetization. “It’s about the relationship between fan and performer – and how you tell that story.” 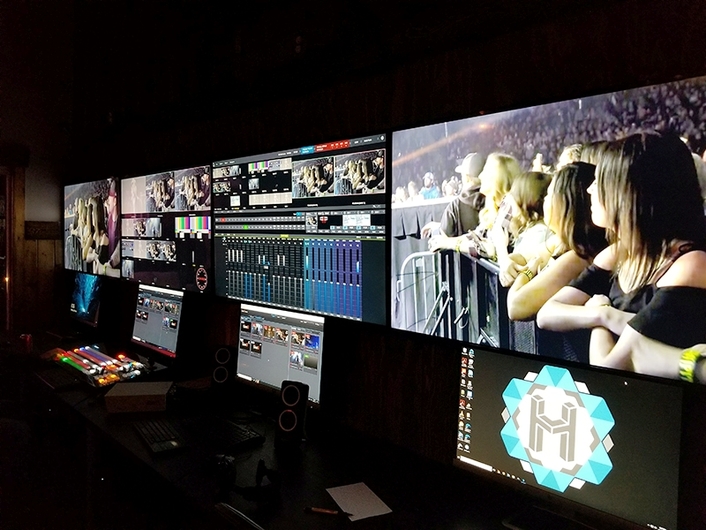 That became the essence of Hubcast’s mission: to “Create Community Through Content” by connecting with audiences, live or near-live, and bringing them as close to the performance – and the performers – as possible.

“The Voice [reality TV singing competition] is a performance program that successfully brings that energy to fans, and I know what it takes for them to do that,” says Young. “They really have portrayed how to get the excitement from the live event into the homes of people, but it takes a huge amount of infrastructure, budget, and a ton of high-end technology.”

He wanted to set a bar for his productions that came as close to making a fan connection as The Voice does. “Technology should not be the factor that limits you from doing that,” he says. “It should be the way to make it happen.” 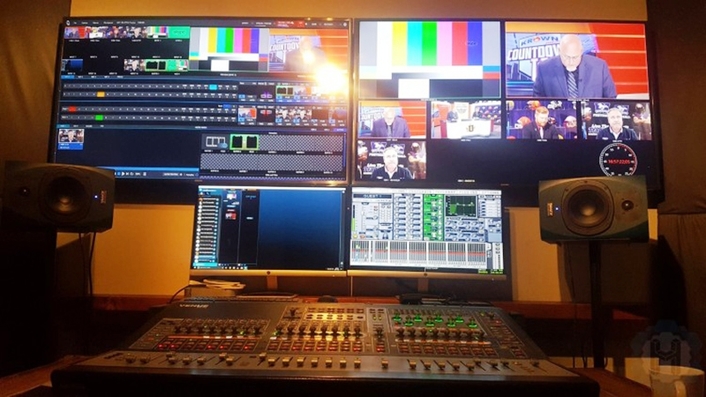 TriCaster TC1 getting ready for a live production

At the same time, Canada’s broadcast scene was undergoing a transformation, with major broadcasters joining forces or closing studios in certain cities, which left dozens of Young’s pro video peers suddenly available for shooting and producing gigs across the country.

Says Young, “As these broadcasting companies were merging and shutting down studios in cities across Canada [because of local carriage rules], there was all this amazing talent out there, everything from producers and technicians to content creators and writers,” and at the same time, he noted, a drop in local content.

“With these shows shutting down,” he says, “I realized there needed to be a company like Hubcast out there to pick up the slack.” 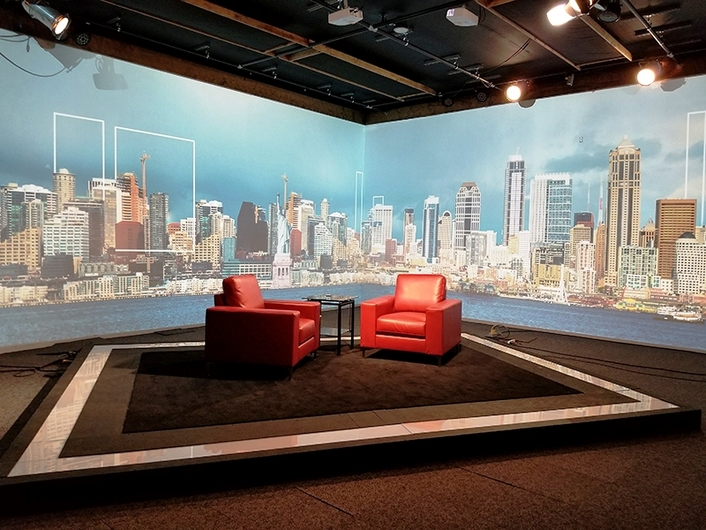 He envisioned a production model that could pick up where the broadcasters had left off and create relevant, regional programming; tap into a nationwide talent pool situated in various locations; and develop shows and produce events in those locations.

Most importantly, he envisioned a model that would eliminate the need for a large-scale, traditional video infrastructure that comes with a price tag out of reach for anyone except big broadcasters.

Not Remotely Tied Down

What Young came up with was HUBcasting™, a remote workflow designed around three major technology advancements, none of which (unlike baseband television infrastructure) was even a twinkle in the eye of broadcasters back in the millennium days. 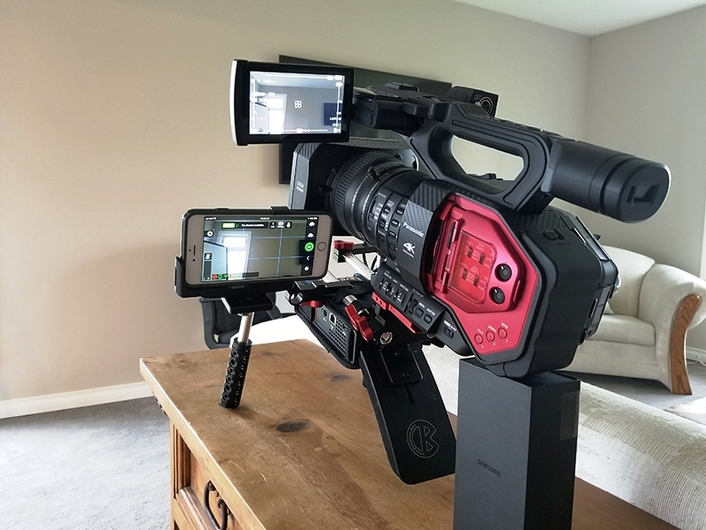 LiveU LRT™ transmission, for sending camera feeds wirelessly over bonded cellular channels, then syncing them frame-accurately on a home-based server

NDI – NewTek’s technology for real-time encoding of video over IP – to connect over-the-network sources (including the LiveU camera signals), monitors and controllers, eliminating the time, expense and labor of the traditional remote infrastructure.

“With TriCaster and most importantly, NDI, what NewTek has done is allowed us to compete at a level that as an independent producer was unthinkable before,” says Young. “Our whole remote workflow can scale to any size.”

What that also means is he can now put camera people anywhere – even, as he did recently at a concert in Melbourne, Australia – sending back live footage from all the cameras, over mobile networks a half a world away with less than a second of delay. But instead of being tethered to a truck or a control room, they can carry their equipment and freely wander around. 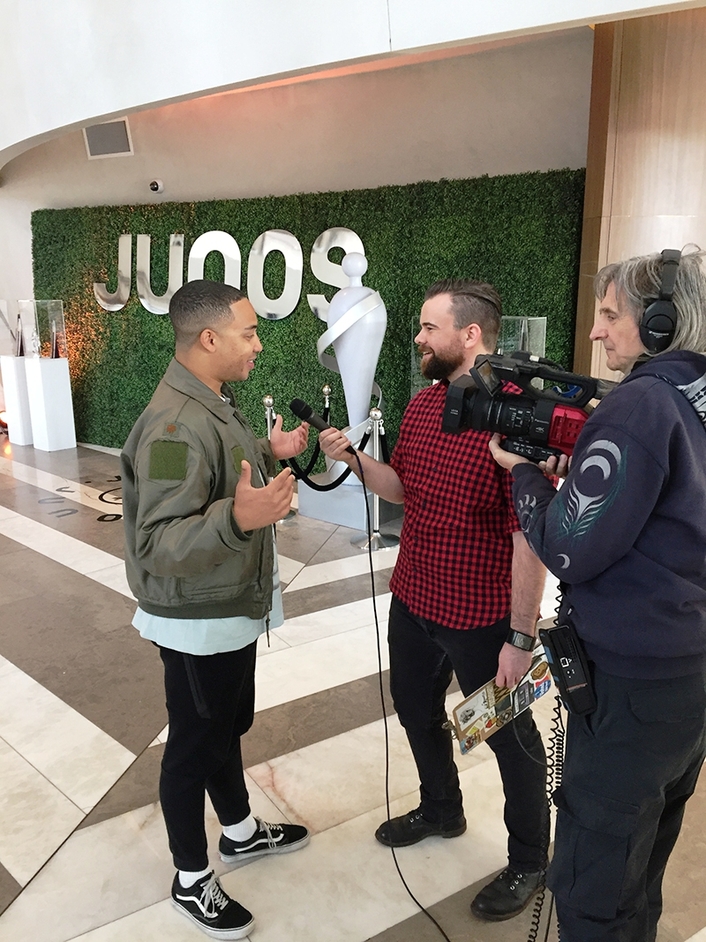 HUBcasting in action during the JUNO awards, showing the "show behind the show" with roving interviews

“We come in totally wirelessly,” says Young. “We can do the whole ‘show behind the show,’ we can go do the interviews. We don’t worry about connectivity with the exception of having the sound man give me a feed from their console. We don’t worry about internet because we use bonded cellular. We don’t interfere with anyone switching the IMAG screen, because we’re just taking their switch. It’s all coming back here, converting to NDI, going into the TriCaster, and we’re done.”

Which is a big deal, if you’ve ever been the one stuck pulling the cable. And Peter Young?

“I was the guy pulling the cable.”

By his own measure (and, as he says, as anyone knows who’s ever had to deal with remote truck production), he’s done enough big events, tours and festivals to know it can take a crew around 4 hours to load in and set up, then another 2 hours to strike and load out. 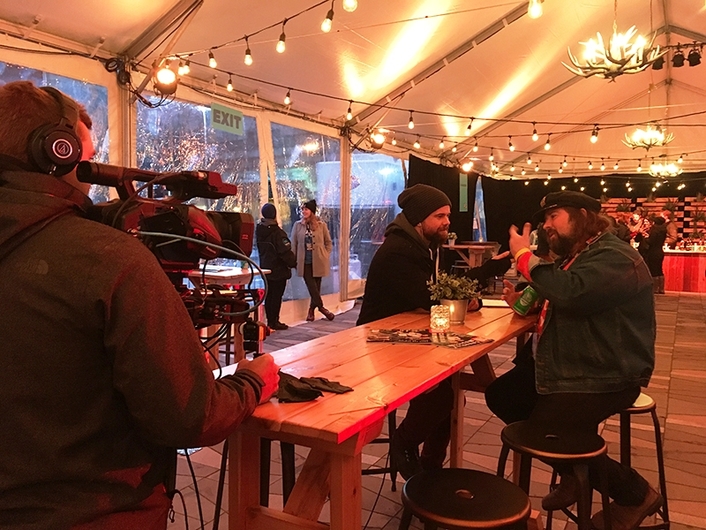 Instead of pulling lengths of cable, camera operators can roam free in any location

That’s basically 6 hours of your life you never get back.

But with HUBcasting™, he says, the crew can get all that time back, as they demonstrated at a recent blues concert. “Our load in was 15 minutes,” he says, “and our load out was 20 – but only because the guys wanted to stop and have a beer.”

During the production itself, once the LiveU camera feeds and other sources from the show are on his in-house network, he taps into NDI to take full advantage of the remote workflow possibilities.

“If I need a multi-view monitor to look at all our cameras and feeds, I can do that with a [NDI-enabled] tablet. If I need an additional source that I can add over the network, I can do that too,” he says. “I have two channels of Skype on my TriCaster TC1 so we can use one for input and one to send back to location. NDI has made it so we can not only produce but communicate remotely, and do it visually if we need to.”

Young says this workflow allows his creators to have a better experience, and he didn’t have to build a whole remote production infrastructure to deliver it. 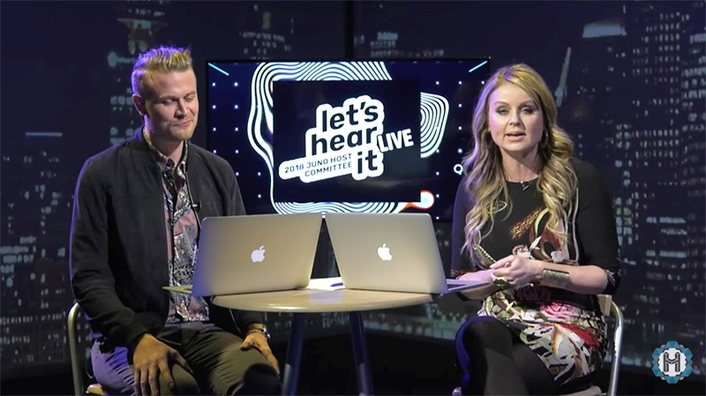 The Vancouver Host committee of the 2018 JUNO awards held its own live program, produced by Hubcast Media

What’s more, it’s made him a global company – without traveling halfway around the globe. “I can have cameras anywhere in the world, and bring them back into our facility – all frame synced, ready to go, just like they’re next door in the studio,” he says. “I can hire locally. I don’t have to move a guy across the border. I don’t have to pay per diems. I don’t have to put crew up in hotels.”

Around the World in a Day

Hubcast Media Productions has recently developed a content funding partnership that helps creators vet and get funding for their productions in a proof-of-concept manner, through patronage by fans who are willing to contribute – clearly signaling that Young is passionate about connecting both audiences and creators with great content. 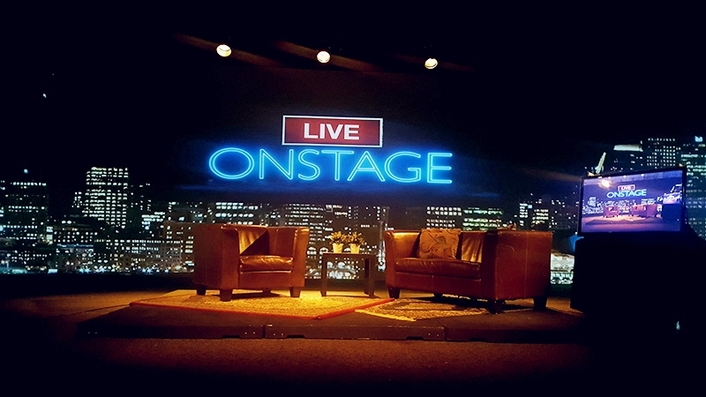 The studio in Surrey, British Columbia, covers live performances and events around the country

Through Hubcast’s “HUBstarter™” program, potential patrons are invited to contribute to various levels of funding on select projects, and gain benefits such as sneak peeks, access to live streams, and artist Q&A.

One of the first projects up for funding is Young’s own passion project, “Live from our Backyard,” a destination music series featuring performances in locales throughout the province of British Columbia – but don’t expect Peter Young or Hubcast Media Productions to stay within a specific geographical confine any time soon.

“Right now, we’re working in pre-production on a live reality series in Peru,” says Young, “and also on a world peace music project, producing seven concerts at seven locations simultaneously around the world,” in traditionally sacred sites such as Machu Picchu, Mount Sinai, the Pyramids, and Bethlehem Square.

But instead of last century’s way of crating up and sending the whole production around the world, he’s doing it through HUBcasting™, saving what may ultimately be millions of dollars in budget versus traditional travel, equipment, crew and satellite transmission costs. 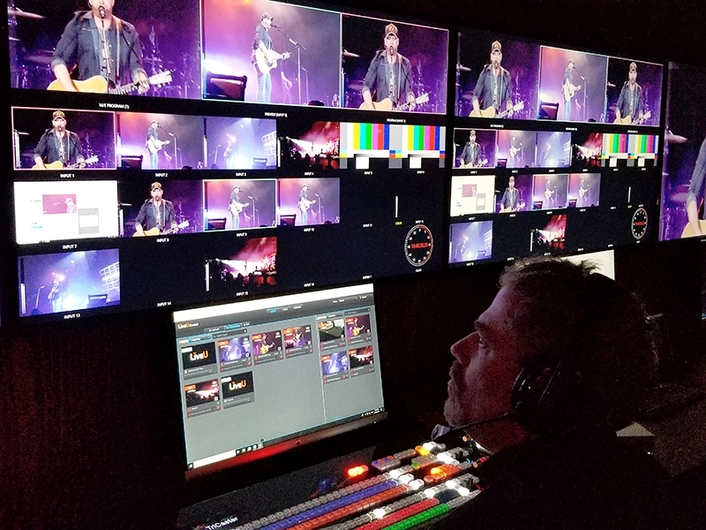 In fact, the goal of Hubcast’s Surrey facility is to produce shows on every continent every week, transcending equipment, border, budget, and talent issues. And yes, he says, this includes Antarctica.

“That’s what NDI has allowed me to do,” says Young. “We’re no longer just a Canadian company. We’ve become a global company.” Right in his own backyard.