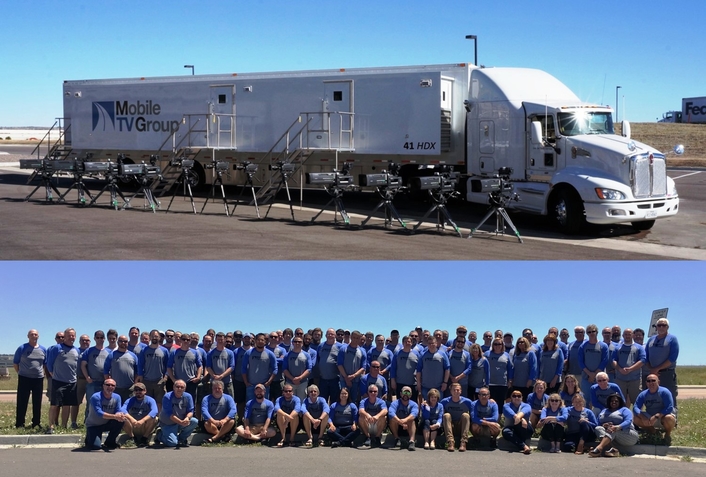 With the size and sophistication of regional-sports-network productions growing exponentially, Mobile TV Group continues to up the ante by rolling out trucks that can serve the rising production needs of RSNs just as well as a nationally broadcast college-football game. The latest generation of MTVG trucks is headlined by 41HDX, which is currently working Fox Sports college football after debuting earlier this year, and 42FLEX, a dual-feed, two -trailer HDR- and 4K-ready unit that debuted this month on AT&T SportsNet Pittsburgh’s Penguins coverage.

“Both 41HDX and 42FLEX demonstrate that the line between regional and national shows has completely disappeared,” say Director of Business Development Nick Garvin. “These trucks are capable of doing your everyday regional show, which is quite large already, and then doing an even bigger national show the next day if needed. We believe there is really not much of a difference between what we’re doing at a regional level and what’s happening at a national level at this point, aside from major playoff and championship shows.” 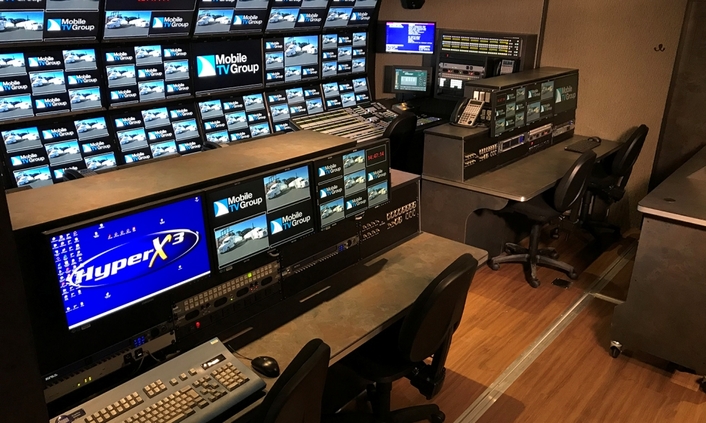 “We’re not saying that these trucks could do a Super Bowl or a World Series, but pretty much any other regular-season national baseball, basketball, hockey, or college-football game would be no problem,” says GM/founder Philip Garvin. “Essentially, with the four super-slo-mos, the tremendous amount of space, the four 12-channel EVSs, and now HDR [capability on 42FLEX], these are national-level trucks that can also do regional shows.”

Inside 41HDX: A Standalone National-Level Truck
Built primarily to accommodate Fox Sports college-football, college-basketball, and MLB productions, 41HDX is essentially a standalone A unit traveling with a B unit that is used almost exclusively for freight and extra equipment. In addition to featuring three rows of seating in both production and replay (eight replay-operator positions total), it sports a versatile utility area that allows operators to be positioned at any workstation. 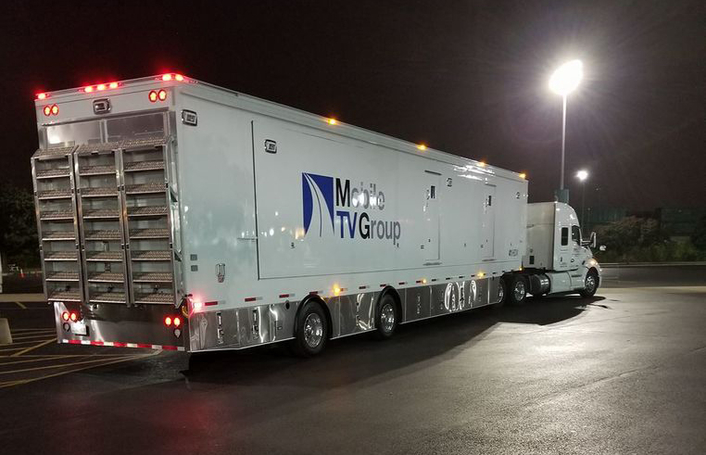 “The thinking behind 41HDX was to be able to do a national college-football-game [production] out of one truck. And we’ve [accomplished] that,” says Philip Garvin. “It’s done college-football games on both FS1 and Fox, but it can also do [smaller shows] if necessary.” 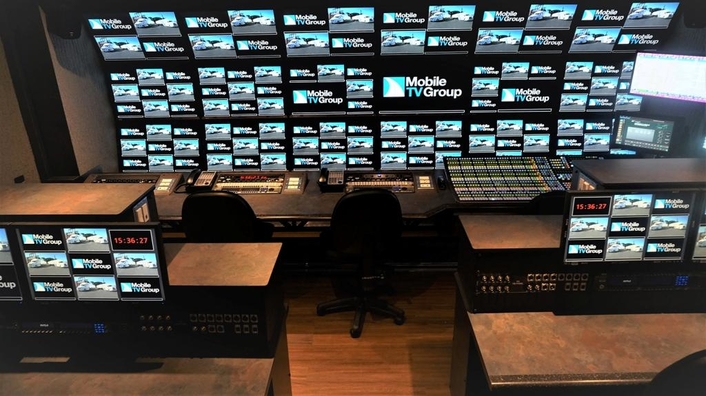 “This is an extremely capable truck all in one very large unit,” says Philip Garvin. “We were very conscious to [incorporate] a lot of weight-saving technologies that have come along recently so that it could go drive the road without being overweight and still have all the high-end technology and extra space.”

Inside 42FLEX: Taking the HDR Leap
MTVG’s most recent launch, 42FLEX builds on the FLEX model that the company launched in 2015 (with 38FLEX), allowing clients to shift among HD mode, SSMO mode, 1080p mode, and 4K mode. 42FLEX, however, is MTVG’s first truck to bring 1080p HDR capability into the equation. The truck not only is HDR-capable but can also produce a 1080 HDR show using almost entirely triax rather than fiber. 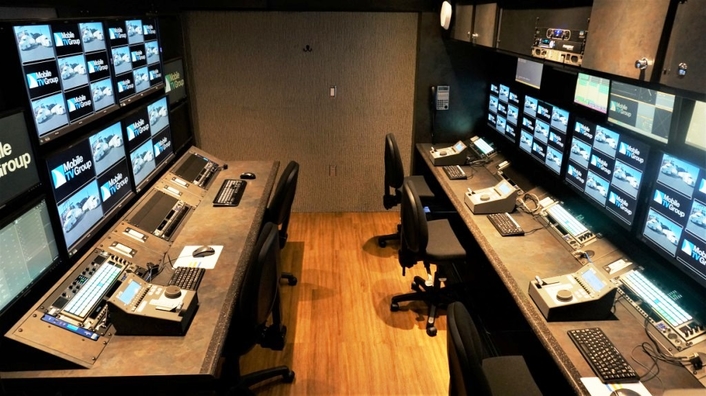 42FLEX sports a robust EVS replay infrastructure, as well as seating for six operators in the A unit (pictured) and three in the VMU

“The truck is very focused on HDR because the cameras can do 1080p HDR in triax, which is a very big deal in the regional-sports [market],” says Philip Garvin. “When you’re doing same-day set and shoot like most [RSNs], fiber is your nemesis because it’s complex and time-consuming. Also, a lot of venues still have only triax and have very little or no fiber. We’re not saying you can’t do HDR with fiber, of course you can, but, when you are at a venue that doesn’t have much or any fiber, you’re going to wish that you could do HDR with triax. And now we can.”

42Flex rolls with a standard complement of 14 Grass Valley cameras outfitted with Fujinon lenses. Seven Grass Valley LDX 82 Premier cameras can shoot HDR over triax; the only need for fiber for an HDR show would be to accommodate the four LDX 86 Universe 6X super-slo-mo cameras. According to Philip Garvin, FLEX42 is capable of producing a full HDR show today, the only caveat being the need to add HDR monitoring.

“We are no longer building SDR-only trucks. All of our trucks will be HDR going forward,” he says. “We think there will be a lot of interest in 1080p HDR, but we could even do 1080i HDR if needed. And we also plan to do HDR 4K with our 4K trucks, too.”

The new mobile unit represents the next generation of MTVG’s two-trailer dual-feed regional sports trucks, with the A unit serving the home show and a 42VMU (visitors mobile unit) serving the away show. 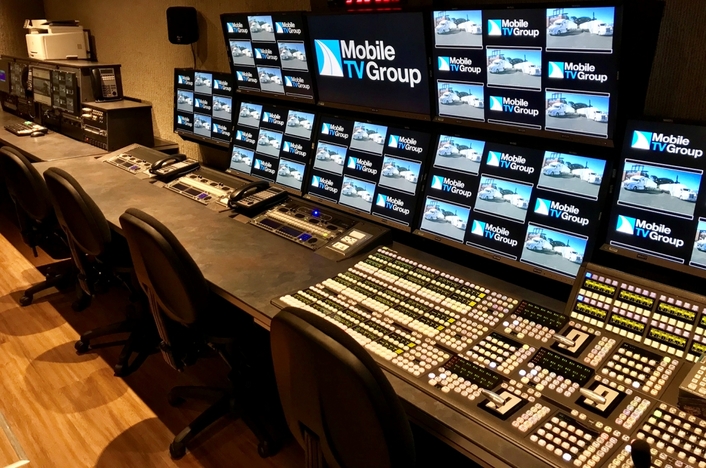 “42FLEX turns Pittsburgh into a VMU market, where the visitor dual-feed [production] has its own trailer, and that’s been an enormous success for all clients,” says Philip Garvin. “The visitor show has almost everything [the home show has], including network EVS [access] to the four super slow-mos, for the dual feed, which is pretty amazing.”

Built around a 7M/E GV Kayenne K-Frame switcher (3M/E assigned to the visitor show), 42FLEX features a 378×802 Evertz 3G/4K video router, 2752×2848 Evertz audio router, and an RTS ADAM-M matrix comms system (with full integration between the A and VMU units).

Robust replay capability is provided by two 12-channel EVS XT3 replay servers, two 12-channel XT4K servers, and a four channel EVS XS3 server for SpotBox (two channels per show on duals). The A unit boasts up to six replay-operator positions (plus a tech-manager spot), and the visitor show has full access to the EVS network with up to three operator positions in the VMU. 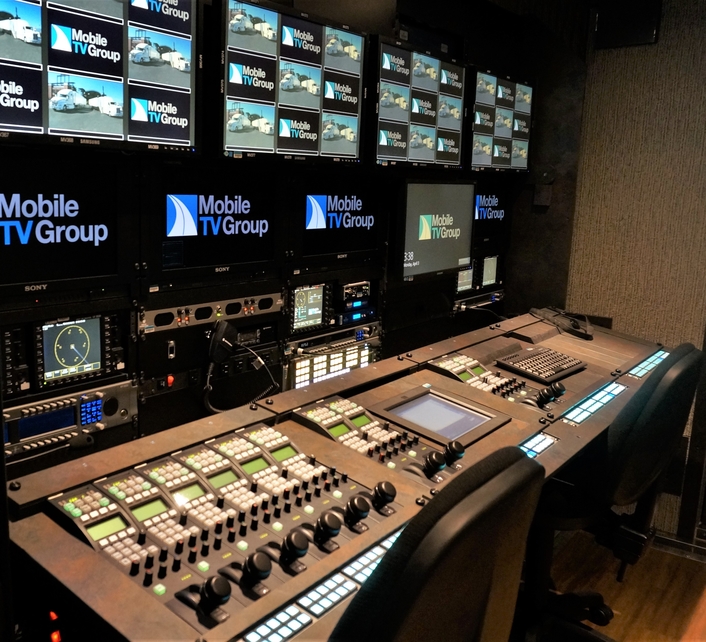 “These trucks are maxed out in terms of weight; they are within a few hundred pounds of the 80,000-lb. limit,” says Nick Garvin. “We have packed every last piece of equipment possible in there, and we’re still finding new ways to save on weight. Since we do not only the integration in-house but also the metal and woodwork, we have been able to spend more time on weight reduction by using different metals and structures to make it lighter. That allows us to add more technology and still keep it under the weight to roll it down the road.”

MTVG also continues to refine various other aspects of its truck design, including angling monitor walls to provide perfect line of sight for the production team.

“We’re very focused on fine-tuning every aspect and getting down to the nitty-gritty details for each truck,” says Nick Garvin. “We’re constantly evolving new ways of doing things.”