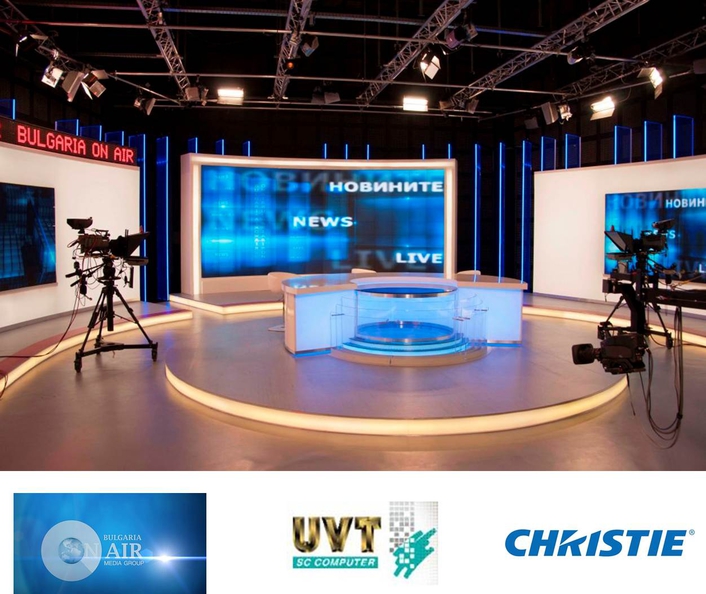 UVT SC Computer installs 250 Tiles for five individual stage sets
New television station Bulgaria On Air hascommissioned a major Christie MicroTiles installation at its newly-renovatedfacility near Sofia Airport. This is the first use of the revolutionary videowall in Bulgaria.BOA is located near to SofiaAirport (Brussels 1 blvd, Sofia, Bulgaria) in completely renovated facilitiesowned by the holding.ThestatioTOwned by MSAT Cable, a subsidiary of Holding Varna, the priority of thisbroadcaster is to deliver top quality business and financial information tolocal audiences and international investors, advising them on the opportunitiesthat exist in Bulgaria. Their development strategy is to generate leads byattracting the right audience.

Assisting them intheir mission is the new MicoTiles display, which is located in a versatile newstudio, for which five separate stages have been built to host the differentshows.Thefeature backdrop is a curved display, measuring 5.71 x 2.45 meters and containing 112 MicroTiles. Inaddition there are two displays with 30 MicroTiles each (2.45 x 1.53 meters), one display with 18 Micro Tiles(measuring 2.45 x 0.92 meters) and an angled display formed by 2 x 30 MicroTiles each (2.45 x 1.53meters). All are built into the TVdesign set and all screens are connected to HDSDI video switchervia HDSDI/HDMI converters.

Combining the strengths of DLP® rear projection and LightEmitting Diode (LED) technology Christie MicroTiles offer substantiallybrighter images and a much wider colour palette than conventional LCD andplasma displays. With no practical limit to the number of tiles in a display,Christie MicroTiles produce a virtually seamless canvas with an unlimitednumber of super-fine pixels — in a small form-factor and with low energyconsumption.

Theintegration was carried out by UVT SC Computer, one ofthe leading broadcast and professional system integrators and distributors inEastern Europe, after they presentedMicroTiles to the customer along with configuration suggestions and a technicalproposal.

Theintegration company’s Director of Sales, Alexander Kitanov said, “The original intention of the customer was to use plasma screens onall sets, but after a detailed presentation and explanation of the technicaland operational benefits of MicroTiles he was convinced by the benefits of thistechnology. Thanks to the closecooperation with Christie we were able to match their target price and to winthe project.”

He said that the clients were particularlyimpressed with the narrow gaps between the screens. “This was veryimportant for their big curved screen. The uniformity of the colourreproduction and automatic operation were also very highly regarded but in allrespects, against the other competing technologies, MicroTiles gave a strongerperformance: colour reproduction and consistency acrossscreen, image stability, maintenance, ease of set up and infinite resolution.” 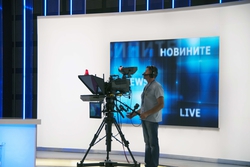 All MicroTiles sets can look forward todaily usage since all live shows and station news will use thedisplays, which feature both live and recorded content generated by the graphics department ofBulgaria On Air.

“Our goal is to forge asocial network,” said the station’s general manager. “We plan to develop activedialogue with our audience and offer participation in numerous additionalevents such as conferences, discussions and seminars. We want to createan innovative type of channel for a specific audience with the viewers activelyinvolved in the content making — and Christie MicroTiles is part of thatinnovation.”

The project was supported throughout by Tamas Vaspori, Christie’s Independent Business Development Consultant, Central EasternEurope. At the outset of the installation he and a Christie application engineerwere on hand in the studio to train UVT and give them deeper knowledge of theMicroTiles systems. “Since then UVT has done a great job without any problemson-site,” said Vaspori.

The relationship between the two companies began around a year ago, after which UVT began to introduce Christie products onto the Bulgarian market. “Between us we have built a very good relationship and hopefully we will be able to rely on this cooperation long into the future,” added the Christie man.

James Cameron and Vince P...oleil 3D Film at IBC 2011
Projection in the Olympiahalle
Christie Behind the Large...reen in Spain’s TV News