NVIDIA case study
Going to the movies has changed forever. Live-action, stereoscopic 3D production creates highly immersive theater experiences, and is proving to be a boon to box office revenues. “Avatar” has earned over $2.5 billion at the box office, then “Alice in Wonderland 3D” broke the record for opening weekend in 3D, and the highly anticipated release of “Tron Legacy” is poised to be huge successes.

However, getting these films to theaters on budget and on time – while creating stunning visual effects – continues to be a struggle due to ongoing production challenges. The world’s most prominent post-production houses, including Warner Brothers and Industrial Light and Magic, have been searching for new technologies and processes to solve these problems.

Shooting a live-action 3D film today requires merging two images shot from two separate cameras (one for the right eye, the other for the left eye). But no two cameras or lenses are exactly alike, so getting both images in sync for every frame is challenging. To make matters worse, if you’re shooting with a RAW camera, there is no way of knowing whether they are aligned properly until they are reviewed, which can be a computation-heavy, time-consuming process involving transcoding the raw, unprocessed footage, transferring it to a workstation, and then rendering it. All of this must happen seamlessly and quickly for the director of photography and the team on set to be able to check what was just shot.

If the images don’t line up and re-shoots are needed, it’s back to square one. Adding time and complexity, multiple shots need to be able to be reviewed at once, since assessing the moving picture is the best way to assess the efficacy of the 3D image.

Enter IRIDAS, a software developer for the film and broadcast industry that develops solutions for playback, color correction and workflow automation. IRIDAS has pioneered tools for real-time 3D content review and enhancement, redefining how artists interact with their footage as it is being created. 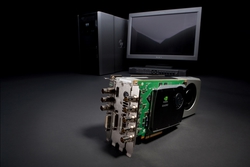 IRIDAS’ solutions, powered by NVIDIA Quadro professional graphics, are designed to streamline the production process to near real-time while simultaneously helping to cut costs. Using the NVIDIA Quadro Digital Video Pipeline, with its ability to process HD-SDI streams, IRIDAS’ RealTime RAW technology eliminates the need for the time-intensive transcoding of RAW files between the camera and the workstation—a process that without the advantage of utilizing the power of the graphics processing unit (GPU)—can take a full day or more.

IRIDAS RealTime RAW enables render quality processing up to 4K resolution in real-time, and allows instant review of RAW files directly from any digital film camera (e.g. the SI-2K Camera or the ARRIFLEX D-21 Digital Camera). The only solution of its kind, RealTime RAW offloads most of the computational work to the massively parallel processing power of the NVIDIA Quadro GPU. This results in full-speed playback at levels of quality on par with or better than images that went through the traditional, time-consuming, offline transcoding process.

“When we founded IRIDAS in 2000, we recognized the power of the GPU and the advantages it provides in moviemaking,” said Patrick Palmer, chief operating officer of IRIDAS. “With parallel computing capabilities of NVIDIA GPUs, the critical footage review process is dramatically accelerated and enhanced—a huge benefit to 3D production.”

In an era where shooting can happen anywhere, film sets often need to be portable. With IRIDAS, the footage review process can happen on a mobile workstation with a single, powerful NVIDIA Quadro GPU—versus requiring a large, expensive rack of central processing units, or CPUs. The net result is a greater degree of moviemaking flexibility and dramatic savings.

With help from NVIDIA Quadro GPUs, IRIDAS brings the power of real-time 3D footage review to film sets. The valuable time saved in the rendering process can be added to the creative process, resulting in better visualizations, more compelling films, and happier audiences.

“All day, every day, I’m grateful for IRIDAS,” said Joe Van Dalsem, creative director of post production for ParadiseFX, the studio behind the groundbreaking effects in 2009’s “My Bloody Valentine” and the upcoming “Street Dance 3D” and “Jackass 3-D.” “I can get all the 3D footage from a full day’s work reviewed and quality controlled in a matter of hours. Before using IRIDAS on NVIDIA Quadro, that same process could have taken a week or more.”

“If you’re a director of photography and you’ve got an entire crew of people burning dollars waiting on you to make a decision about a series of shots, you need to streamline that decision process as much as possible,” added Palmer. “You just can’t afford to wait, and with NVIDIA, we don’t have to.” Concluded Palmer, “Instead of buying expensive hardware configurations comprised of CPUs, we are much more efficient turning to the GPU. For a typical production, we are talking cost savings of several hundred thousand dollars.”

Silicon Imaging, a manufacturer of high-definition digital cameras, is leveraging technologies from both IRIDAS and NVIDIA to streamline the filmmaking process even further. The innovative SI-2K Camera—the first 2K Digital Cinema camera on the market that allows for streaming of raw footage directly to a computer with an NVIDIA GPU – comes fully-equipped with IRIDAS SpeedGrade technology, for on-set color-management. The value and quality of the SI-2K Camera has been proven, as it was used in filming “Slumdog Millionaire,” the 2009 Academy Award winner for Best Picture and Best Cinematography.

SI-3D Live will boost productivity on live-action 3D films, and as a result, will have advantages for live 3D broadcasts, too. Since SI-2K 3D Live will enable broadcast-quality output, directors will be able to review and color correct their footage in real time. Imagine a live concert or sporting event being broadcast to other venues, in 3D, enabling a much larger audience to experience it. This technology is poised to open up new opportunities – and revenue streams – for the creation and distribution of 3D content.