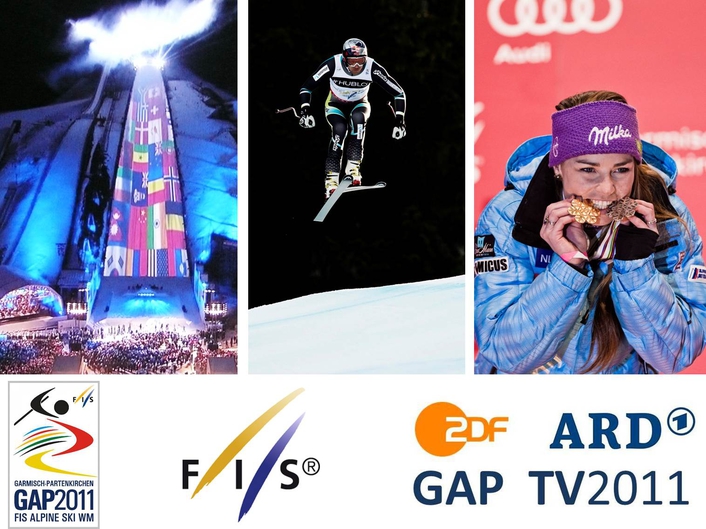 The Opening - The Competitions - The Medals
For the second time since 1978 Garmisch-Partenkirchen was the “heart of alpine skiing” for two weeks. The host broadcasting operation for this year’s most spectacular winter event was in the hands of GAP TV2011, a joint venture of ARD and ZDF. Under the leadership of ZDF the host broadcaster took care of the production of the international signals of all the competitions (Super-G, Downhill, Super Combined, Nations Team Event, Giant Slalom, Slalom), and the services to unilateral broadcasters from 8th to 20th February.

The opening ceremony on 7th February was produced by the Bayerischer Rundfunk (BR) on behalf of the host broadcaster in 1080i/50Hz and 5.1 surround sound: Alpine skiing was presented as a sport defined by a sense of family and friendship between competitors from past and present, but also as a dynamic sport driven by continuous innovation. The complete opening ceremony was produced with projection technology including the largest available video projectors (Barco) using the landing area of the ski-jump as a gigantic snow-screen.

With a staff of 240 people GAP TV2011 produced all international signals in 1080i/50Hz with stereo sound. The world feed package was also available in SD, while the isolated feeds only were distributed in HDTV. All graphics were produced in 16:9 aspect ratio.

The Venues Gudiberg-Arena (Slalom races) and Medal Plaza (Winner Award Ceremony) were connected to the International Broadcasting Center (IBC) and the Radio and Television (RTV) Compound at the Kandahar-Arena via fiber cables. Also the Alpine Technical Room (ATR) below the starting point of the Downhill races and close to the starting point of the Super-G races was connected to the IBC via fiber cables. 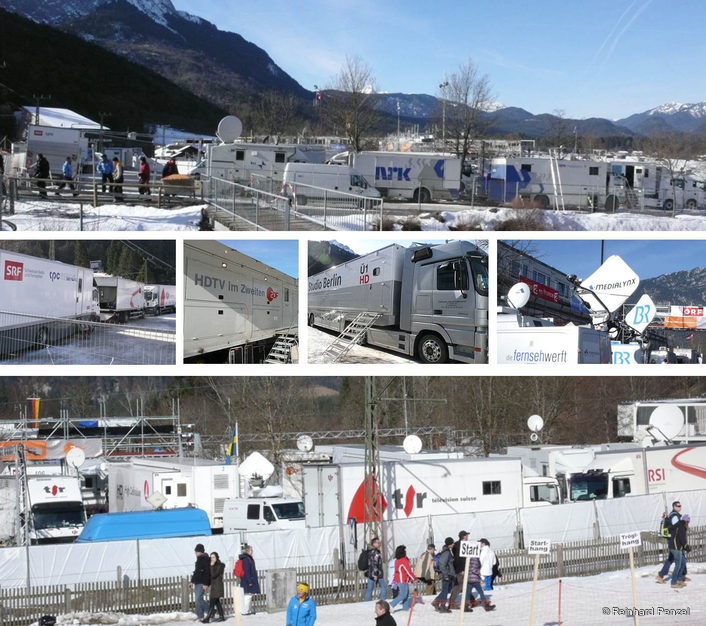 The TOC was located next to the MCR. It was the gateway for all unilateral interconnections. The TOC provided connection panels for audio and video tielines, talkback and also V/A connections to the Gudiberg-Arena and the Medal Plaza. For the rights holders the TOC also offered the following formats for the play-in of pre-produced materials: HDCAM, IMX, P2 and DigiBeta.

The RTV Compounds were next to the temporary IBC building. Broadcasters had access to the MCR/TOC via cable trays and cable bridges connected the IBC to the RTV compounds. There were actually four compounds with a total size of 5,700 m². The first one was the compound for the technical vehicles of GAP TV2011 with the OBVan HD Ü1 from Studio Berlin-Adlershof (SBA) plus four production trucks, four tender trucks and one SNG. The other three compounds (RTV1,2,3) were for the unilateral broadcasters with a capacity for 11 HD OBVans, 21 production trucks, 17 tender trucks and six SNGs.

At the Kandahar-Arena the competitions of the Downhill, Super-G, Giant Slalom, Super Combined and the Nations’ Team events took place. 37 commentary positions (two fully equipped while the others were partly equipped) were built on two floors at the back of the spectator stands granting an unobstructed view towards the finish area. Five TV glass studios and three announce platforms were located at the back of the stands and permanent positions at the Live Mixed Zone were booked by 14 TV and nine radio stations. These commentary positions were also used for off-tube commentary of the races at the Gudiberg-Arena and the winner award ceremonies at Medal Plaza. The Commentary Control Room (CCR) was the main hub for the commentary system and the gateway at the arena. 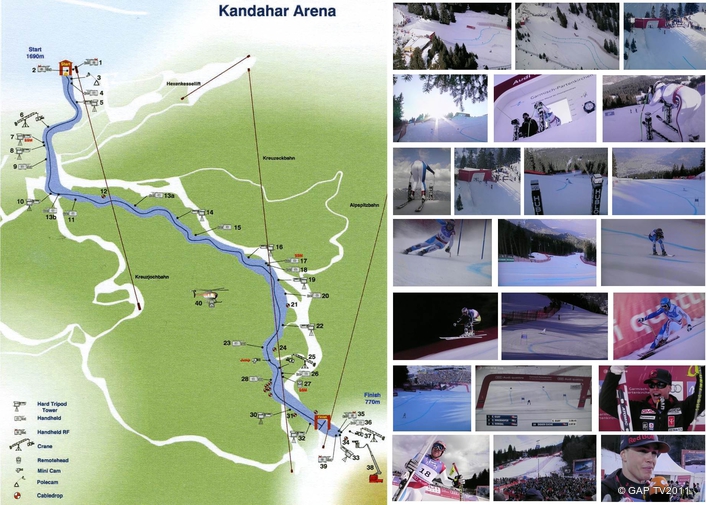 For the Kandahar races GAP TV2011 had 40 cameras in operation, mainly Grass Valley LDK-6000 and LDK-8000 cameras with Fujinon lenses. Four were mounted on cranes and one was on a mobile platform that could be lifted 40m high. Also three SuperSloMo cameras LDK-8300 were positioned at the race tracks. The installation also saw two Cunima mini-cams a HotHead at the “Freier Fall”, a Polecam at the start and at the finish area and a wireless camera in a helicopter for the beauty shots. Due to the fact that the Kandahar races were run on different tracks it was necessary to move some of the camera positions in between the competitions. The international signal from all these sources was mixed on a Grass Valley Kalypso switcher while the stereo sound was mixed on a Lawo mc² 66 in the SBA HD OBVan Ü1. A Grass Valley routing matrix in combination with the VSM controller from L-S-B took care for the internal distribution of the signals. The intercom between the crew in the OBVan and the camera positions was realized with Riedel Artist systems. 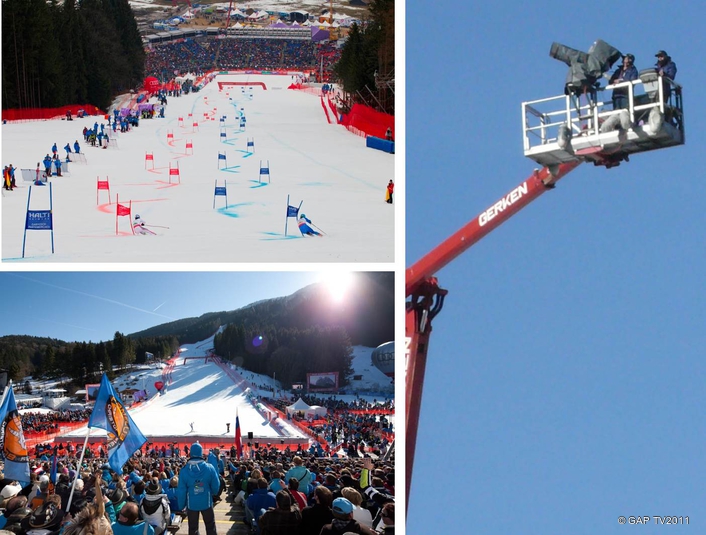 The live production with the coverage of the start sequences of the downhill races and its time delayed insertion into the live signal as well as all the SloMo and SuperSloMo playbacks relied on 13 EVS LSM systems. Due to the quite complex workflow at the downhill competitions two directors were on duty: one responsible for the start sequence and one responsible for the rest of the race track including the finish line coverage. 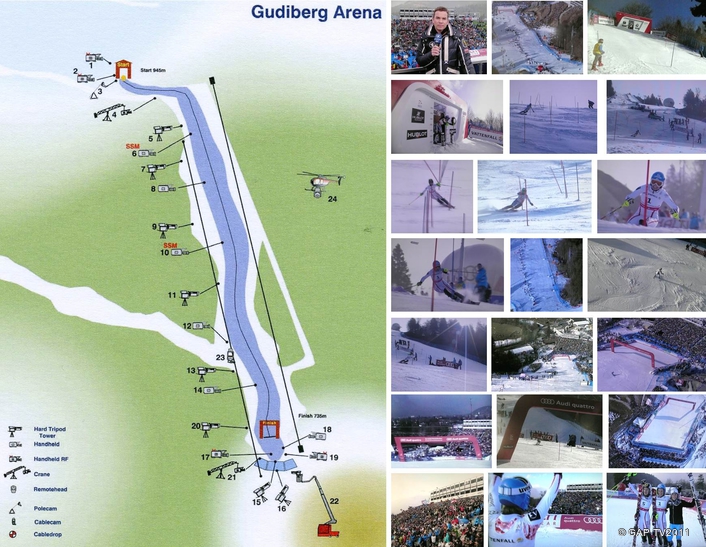 The Gudiberg-Arena hosted the Slaloms and the Slalom part of the Super Combined. The arena had been reconstructed: the slope was widened, the course adapted to the challenges of world championship speed races, the finish area was changed giving a more exciting atmosphere for athletes and spectators and finally a new chairlift was built. Next to the arena at the northern side of the ski stadium (where the opening ceremony has taken place), the RTV compound was located with a total size of about 1,600 m². Three OBVans, five production trucks, four tender trucks and one SNG had found its home here during the two weeks of the Alpine World Championships. In addition 20 office containers were stacked on two floors including the RTV’s TOC. 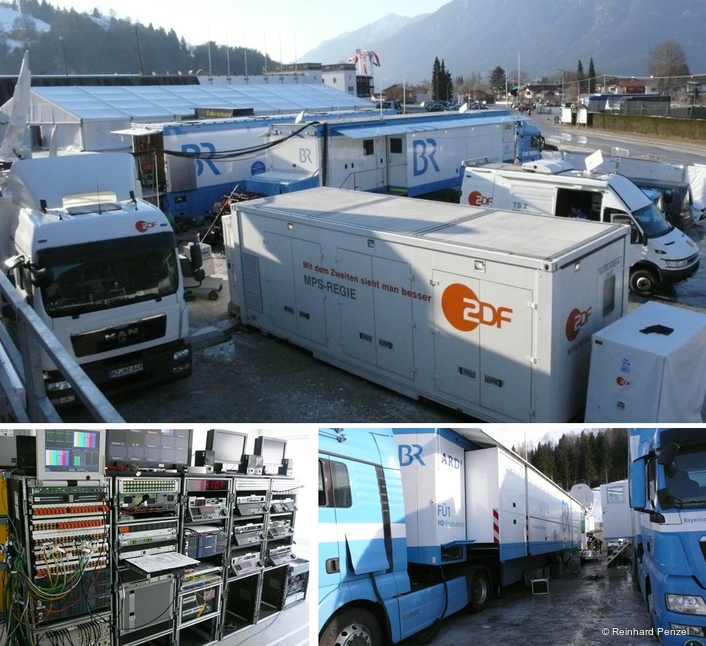 For the Slalom races at Gudiberg GAP TV2011 had installed 24 camera positions. In addition to 16 Sony HDC-1400R cameras with Fujinon lenses, two Sony SuperSloMo cameras HDC-3300, two Polecams (at the starting area and close to the finish line), two cranes, a 40m high mobile platform behind the spectator area and a Helicam were in operation. For the first time a Flycam (Wingcam MC developed by Airtime) was installed, covering all the Slalom competitors from start to finish. Mounted on the Wingcam was a Sony HDC-P1 with a Canon lens on a remote head develop by Airtime. The Flycam was able to follow the racers with the same speed during their performance and delivered stunning images of the Gudiberg slalom events. For the generation of the international signal the FÜ1 from BR was on location with its Sony MVS-8000 vision mixer, a Lawo mc² 66 audio mixer, a Grass Valley Trinix routing matrix (controlled by a VSM from L-S-B) and a Riedel Artist intercom matrix. 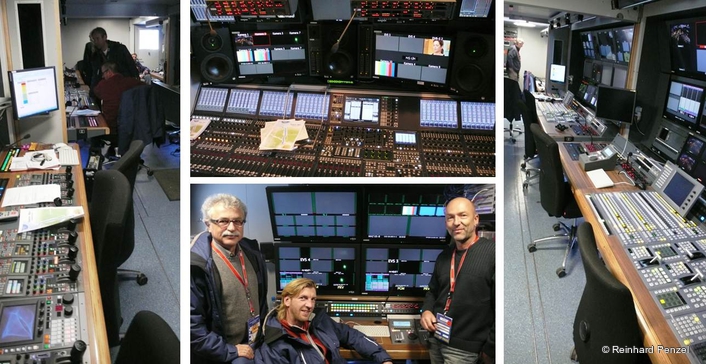 The Medal Plaza was located in the center of Garmisch in the middle of the Kurpark. Every evening at 6:30pm the scenic venue hosted the Winner Award Ceremonies. The RTV compound had a total size of about 1,200 m² giving enough space for two OBVans, three tender trucks, one office truck and nine office containers. In front of the stage for the medal ceremonies one TV studio, three announce platforms and four TV mixed zones were set up. 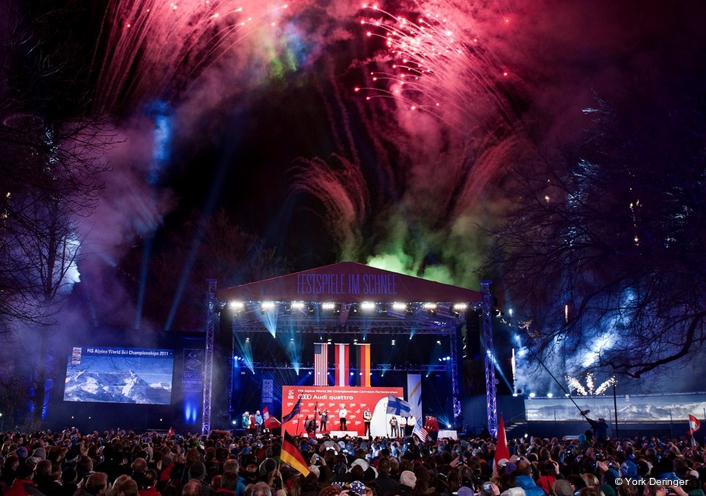 The international signal was produced by the FÜ2 HD OBVan of Südwest Rundfunk (SWR). The OBVan has 12 LDK-8000 cameras with Fujinon lenses on board, however only six cameras including a Polecam were in operation for the ceremonies. In the HD OBVan the crew worked on a Sony MVS-8000 vision mixer in combination with a Lawo mc² 66 audio mixer and a Snell Cygnus Gold routing matrix. Also here a Riedel intercom matrix served for all the communication purposes.

The multi-screen, multi-platform production of the FIS Alpine World Championships

Today’s sports broadcast compounds no longer have the luxury of producing video and audio for a single screen. The proliferation of new devices has forced broadcasters to alter the make-up of their truck compounds to accommodate for new-media production teams, broadband video delivery and for the delivery to big LED screens in the spectator areas of the event. At each of the spectator areas at Gudiberg, Kandahar and Medal Plaza two LED screens were installed to deliver the races and the ceremonies to the spectators including close-ups of the winners and the losers. Therefore the IBC not only included additional trucks for graphics, for timing and scoreboard displays, for SuperSloMo operation, editing and the wireless infrastructure; it also included production areas for the mixing of video content for the LED screens, a production area and encoder farms for the apps producer and other new media requirements. 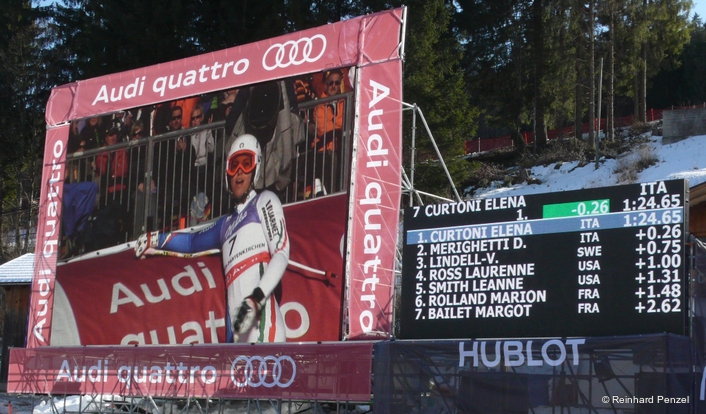 The multi-platform delivery of the event has forced operation managers to integrate the new media staff fully into the broadcast compound. What once was an entirely separate production must now interleave with the traditional broadcast production. Not surprisingly, this shoulder-to-shoulder relationship between the broadcast and new media staff has created an osmosis effect that allows much of the content created for the broadband platform to be utilized for the broadcast. Putting these groups together has opened up plenty of opportunities to move that content from the small screen to the big screen and vice versa.

The two weeks event in Garmisch-Partenkirchen has delivered great stories of the dramatic of the alpine sports and its athletes onto various screens: for the fans in front of their TV sets at home, for the spectators in the arenas and for the followers on the move on their mobile devices. 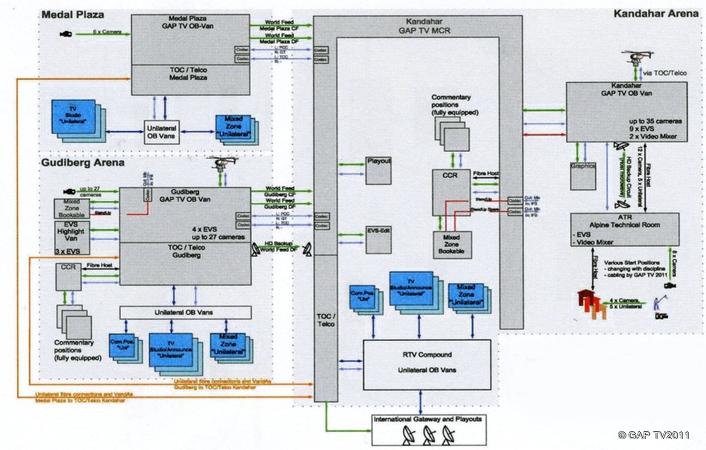