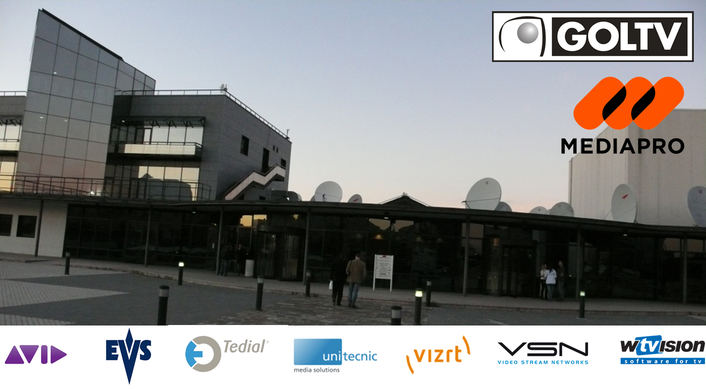 Gol TV is located at the Mediapro Facilities in Madrid
GOL Television is a 24/7 football channel that is produced in full HD based on a tapeless workflow. The channel provides viewers with live and recorded broadcasts, match highlights, news bulletins, as well as all of the goals from the major European and South American football leagues.

GOL Television is run by MEDIAPRO, a leading player in the European audiovisual market that offers different services in the audiovisual content production sector and in sports and cinema rights management. Launched in September 2008, the implementation of GOL Television was associated with the development of MEDIAPRO’s new Nodal Center in Barcelona’s 22@ district. This new center is dedicated to the production of sports and is equipped with the most advanced technologies available in the broadcast industry.

GOL Television is produced at the Nodal Center and broadcasted from another MEDIAPRO facility 15 km away. The systems integration at GOL Television was engineered by Unitecnic, MEDIAPRO’s technical service company. “The GOL Television project required a set up in which the entire production workflow, from ingest to playout, is in full HD andbased on tapeless technology,” said Israel Esteban, Technical Manager at Unitecnic. “This implied that we invest in reliable technology that is able to ingest up to 30 football matches and broadcast 12 of these matches simultaneously. Moreover, this technology had to be fast and fully integrated with third-party systems for graphics, archiving, asset management, and post-production.” Jordi Pañella, General Manager at Unitecnic added: “EVS inspires confidence with its vast experience in HD and live sports production. Furthermore the set up at GOL Television had to be operational in less than two months, which increased our wish to work with a limited number of manufacturers. And since EVS offered a global solution, the decision to use its tapeless technology quickly became obvious.”

EVS provided a fully managed HD workflow employing the entire range of its instant tapeless technology, from XT[2] servers and online media storage, to varying software applications for logging and editing, as well as content management and networking solutions. “The concept of the production workflow at GOL Television is similar to what we deployed for the host broadcast of the Beijing Games, with the exception that in this case the production is running all year long,” said Felix Trapiello, Operations Manager at EVS Iberica. 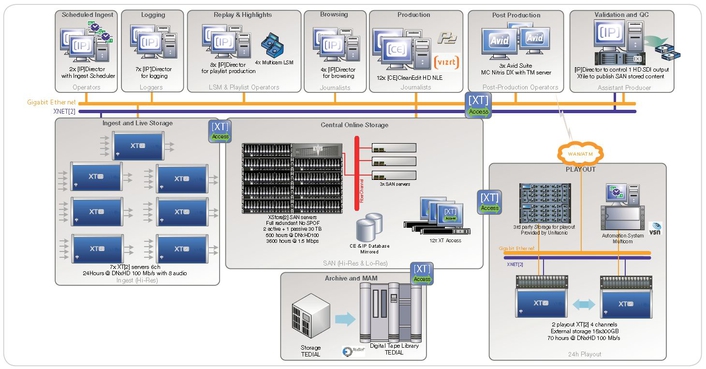 The football matches are ingested and recorded natively as Avid DNxHD® codec files on XT[2] production servers. The feeds are controlled by IPDirector software, the EVS production content management tool that is used for ingest scheduling, online and near-line browsing, content validation, and transfer to central and local storage, as well as post-production. During live broadcasts operators use remote LSM for instant replays and the creation of clips and highlights. Concurrently loggers use IPDirector workstations to assign descriptive metadata to all of the significant actions of a match. These actions are then stored in the Media Asset Management (MAM) database system, where they can be retrieved by operators and journalists who wish to create highlights at a later stage.

Marc Andreu, Chief Documentalist at GOL Television said: “Each weekend we receive between 30 and 40 football matches. The advantage of working with IPDirector software is that we can start to work immediately. As soon as we receive the feeds loggers identify the most important actions of a match and assign descriptive data to the media. On average 150 logs are created per match. Once the media has been logged it is instantly available on the production network, so that journalists and editors can begin their search for content. Up to now we have stored more than 1200 matches in the database. And every action is simple to find and easily accessible.”

All of the matches, clips, and highlights are stored in the central media server, a near-line storage platform basedon XTStore[2] SAN architecture for a period of 15 days. The content can then be instantly accessed through the entirenetwork for production, editing, and playout. The media files that are retained for archiving are compiled and transferredto the Tedial Tarsys MAM systems. XF[2] removable storage devices are also used for the backup of clips and highlights on local Hard Disk Drives.

Journalists at GOL Television use CleanEdit to improve rough cut edits, to prepare news bulletins and reports, as well asvoice-over recordings. CleanEdit is an easy to use non-linear editing tool that offers seamless integration with VIZRT graphics (with plug in) and efficient audio capabilities. Xavi Riera, Journalist at GOL Television said: “With CleanEditthe search for media content is definitely simplified. If I am looking to do a piece on Bayern Munich, I just type in thename of the team and I instantly have access to all of the clips and highlights related to Bayern Munich. It is much easier and faster than using tapes.”

Editors at the post-production work with Avid Media Composer suites, that are fully integrated with XT[2] servers and the central media server. Files can be exchanged between the servers and third-party systems via the Ethernet network. Editors can therefore retrieve the media from the servers, and once the edits are complete send them back to the centralmedia server for playout. At the same time the CleanEdit database is automatically updated. Playout occurs 15km away at another MEDIAPRO facility, which is linked by fiber channel. At this facility HD XT[2] servers are controlled by a VSN Multicom automation system.

From the start EVS has been providing support services to Unitecnic and MEDIAPRO in the installation of the new Nodal Center. A series of operational and technical training sessions were organized before the launch of GOL Television, and the EVS team frequently visits the Spanish broadcaster to understand and determine any future requirements. “We are very satisfied with the work that has been accomplished by EVS”, said José Joaquin Brotons, Program & Content Manager at GOL Television. “EVS has definitely contributed to the success of GOL Television. There is no doubt in my mind that EVS was the right partner for us. Its technology and the support of its staff have helped us to put in place a reliable and efficient workflow, despite the common difficulties that are encountered when pursuing such ambitious plans. Without EVS’ presence we would have never been able to make the necessary adjustments that enabled us to implement such a complex infrastructure. In the end we are very proud to work in a HD tapeless environment.”

EVS Products for a Tapeless Workflow

XStore[2]
A dedicated media server platform for sharing and editing audio and video content in HD and SD. Ideal as either central nearline storage or online storage, it makes workflows more efficient and can be used to host optional EVS software.

CleanEdit
CleanEdit brings together speed and simplicity. Its intuitive timeline editing offers either drag and drop or keyboard driven functions. Transitions and video effects such as slow motion, pixel mask, highlight, zooming, color correction, 4:3/16:9 conversion can be processed in real time without any rendering, ideal for news and sport production.

IPDirector
IPDirector is an integrated suite of video production management software with versatile control through the XT[2] server. Running on a Windows based workstation, IPDirector allows the user to easily ingest, log, manage, search, track, edit, create clips and highlights, browse, and ultimately playout any video or audio content instantly.

XT[2]
The production server that delivers a full range of applications for live and studio productions, as well as post-production. The XT[2] platform offers multiple SD and HD codec configurations with native support. Its open architecture allows maximum integration with all third party technologies.