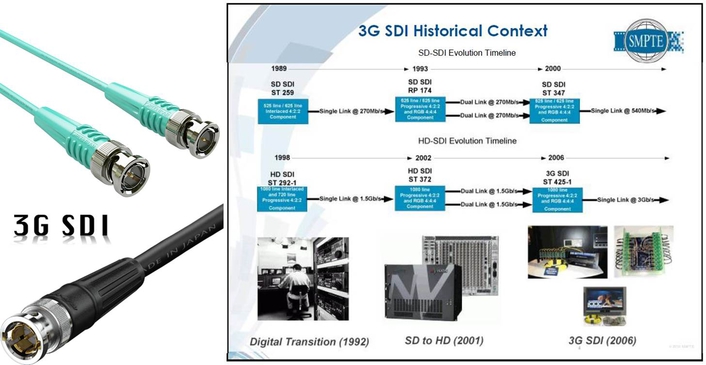 .
Hudson defines "bandwidth disparity" as the new image formats and production requirements that are rapidly pushing past what is feasible for a modern, 3 Gbit/s serial digital interface (SDI) to handle.

All this has occurred in about eight years since SMPTE first published the single-link 3G-SDI standard, SMPTE ST 425M/ST 424M, which experienced rapid and widespread adoption as the broadcast industry's preferred, realtime, streaming media interface.

Now, just a handful of years later, the equation is changing once again. As it does, and the media industry transitions from the high-definition era to the ultra-high-definition era, one might understandably begin to wonder if SDI's window might be starting to close on an increasingly IT-centric landscape where Ethernet style approaches have stepped forward, as they have in other industries, to take over certain functions. For some applications within broadcast plants, this transition is moving ahead, but for realtime-broadcast media streaming functions, SDI is not only being left behind, it is actually at the center of the industry's transition, according to Hudson.

"SMPTE has always been the champion of SDI," Hudson explains. "It was around 2006 that we published the 3G SDI standard, which was the first step in supporting higher data rate images. We finally had a single link interface, covering imaging and data mapping up to 1080p 50/60 image formats on coaxial cable and optical fiber. Then, the industry changed, requiring support for higher dynamic range, signaling 3D stereoscopic imaging, 4K D-Cinema production image formats, and of course, emerging UHDTV1 and UHDTV2 production requirements. So, we had to continue to work to prepare for those changes, which is why the working group [32NF40] was launched."

"An important project within 32NF40 was the development of multilink 3G SDI interface in support of these new requirements. The current status of the work for dual-link and quad-link 3G SDI standards for both stereoscopic and UHDTV images is now complete. Essentially, there were two tracks: single image mapping, which dealt with higher resolution and higher dynamic range image format transport, and also stereoscopic image mapping to handle requirements for stereo TV and stereo D-Cinema production. I would expect to see the final document in the multilink 3G SDI suite [ST 425-6], for stereo UHDTV, to be published by the end of March. We think dual-link 3G-SDI and quad-link 3G-SDI will end up providing a pragmatic solution to solving the bandwidth disparity problem in the short term, at least for the most common 2D and 3D HDTV, 2K, 4K, D-Cinema, and UHDTV1 production requirements," Hudson says. 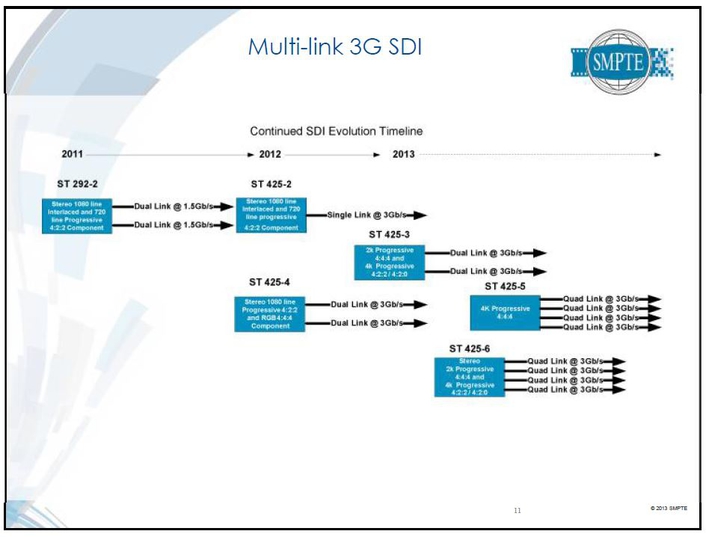 "In addition to all that, because those multilink 3G SDI documents only take you so far with new requirements, there is a new project within SMPTE, managed by the 32NF70 Working Group on UHD-SDI, which is tasked with the development of a suite of next-generation, single-link, dual-link, and quad-link SDI interface standards that operate at 6 Gbits/s, 12 Gbits/s, and 24 Gbits/s line rates, which remain compatible with 3G SDI and continue to leverage the existing, deployed SDI infrastructure. This is work that is just getting [under way], but has significant momentum. We expect to see the first documents, for 6 Gbit/s and 12 Gbit/s standards, to be published around the June time frame." Hudson adds that SMPTE is simultaneously working on high-speed optical SDI interfaces in addition to copper cable interfaces.

"This optical work is important, because while much of the current broadcast infrastructure continues to be based on coaxial cable, we are seeing an increase in the deployment of optical fiber," Hudson relates. "We need to continue to support that [optical SDI], even as we prepare for what comes next."

Hudson suggests that movement toward integration and/or co-existence of SDI-based and IP-based networks on the wider broadcast landscape is next on the horizon.

He opines that it is "highly unlikely that there will ever be just Ethernet-based networks [in the broadcast industry] or just SDI-based networks for the transport of realtime base-band images. That is because different applications benefit from different capabilities and technologies."

"For live program acquisition, such as sports, for example, SDI is the ideal connectivity media," Hudson says. "Its whole purpose is to instantly move pixels from one place to another in a fast and reliable interoperable manner, with very little overhead or complexity. An IP network could be made to work this way, but not without significant network management. For example, in an off-the-shelf IT network, if something goes wrong, it would be possible to ask for a repeat of the last data packet. In live image acquisition, that can't work, because in a live event, that 'last data packet' no longer exists in time. In a broadcast facility, on the other hand, after you acquire an image and begin editing it, a file-based IP/packet-based infrastructure can really benefit you by allowing you to work on different versions of [pre-existing] material in parallel, and deliver that material in different ways."

"So they are meant to address different tasks and needs. Some people believe we could eventually build live broadcast applications using IP, but what is the value proposition in doing it, when you already have such a stable technology in SDI for that purpose?"

The eventual UHDTV future, however, does foreshadow the necessity of broadcast plants moving, as Hudson describes it, "from application and infrastructure islands for UHDTV production, to a new core infrastructure that includes ever-increasing, realtime media streaming interface data rates in support of mainstream UHDTV production, and for that, new build-outs will be required. Therefore, the evolution of both IT technologies and the SDI interface will have to go forward, hand-in-hand," he says.

Hudson emphasizes that SMPTE's 32NF70 working group is now plunging full-speed ahead with its work while, simultaneously, the industry has been examining ways for IT-based technology to interact and co-exist with SDI in the professional media industry through SMPTE's 32NF Study Group on Media Production System Network Architecture and the 32NF60 Working Group on Video over IP. Other efforts, such as the ongoing Joint Task Force on Networked Media, a collaboration between SMPTE, the European Broadcasting Union, and the Video Services Forum, is focused on making sure that IP-based networks can find their way to interoperability with SDI-capable systems in broadcast facilities.

At the end of the day, how well SDI and IP fit together in the long-term and how these and "other transitions we will be seeing play out," as Hudson puts it, "will eventually be determined by what is in the financial interest of the broadcasters and content creators making the technology decisions as they pursue the best return on their investments." Hudson points out that, along the way, one thing is quite clear, the content delivery system will increasingly continue to evolve away from traditional, over-the-air broadcast methods and toward Internet-based solutions.

This is "a monumental shift" for the broadcast industry, Hudson states. "With the introduction of UHDTV, we are going to see this new and high-value content delivered to the home via the Internet using OTT delivery in advance of traditional delivery mechanisms. Traditional broadcast delivery and the standards required in support of the UHDTV ecosystem are lagging, and there is an urgent need for us to develop those standards to allow the broadcast industry to fully take advantage of this new paradigm in high-value content," he explains. 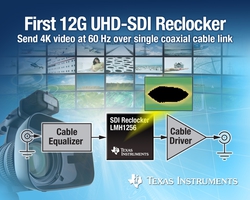 That, in turn, leads to a host of issues and changes that will take years to sort out, and even then, the ground will continually shift. Therefore, SDI will continue to have a significant role to play for the foreseeable future, which is why SMPTE has been aggressively strategizing for its ongoing improvement, and will continue to do so, Hudson suggests.

"The new 3G SDI document suite, and the work of the 32NF70 Working Group to develop 6G, 12G, and 24G SDI is just the continuation of SMPTE's evolutionary approach to the development of the SDI interface," he states. "It's an approach designed to allow broadcasters to extend their ROI for capital purchases, recently made as part of their 3G-SDI infrastructure upgrades, even while they transition to supporting emerging production image formats."