Christie Behind the Largest Screen in Spain’s TV News 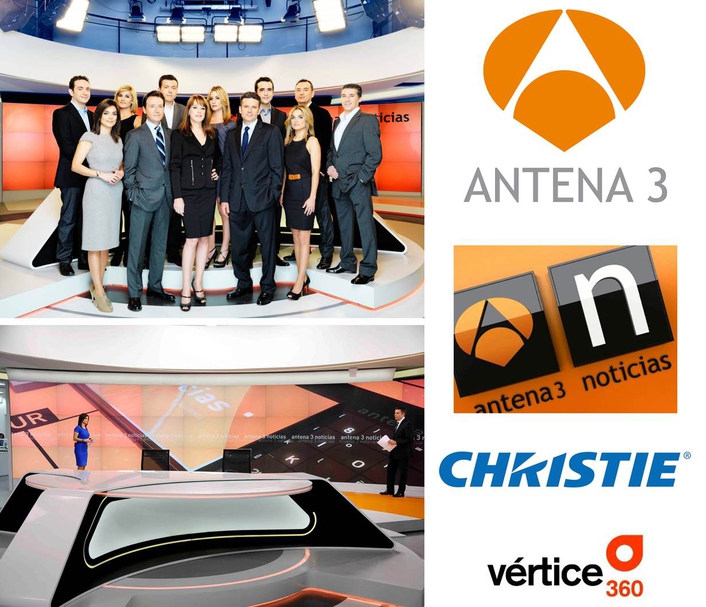 Videoreport mounts a Christie Entero LED 11 x 2.5m videowall in the new studio of Antena 3’s newsroom
Antena 3, the Spanish TV channel, is revolutionising newcasting with its brand new studio and original broadcasting style. The new set for the Antena 3 Noticias news programme, in preparation since the summer, debuted on January 10th with a primetime interview with José Luis Rodríguez Zapatero, President of the Spanish Government. The new studio is spread over an area of 1,200m2 and is equipped with groundbreaking technological resources including a production system unprecedented in Spain.

The most visible and striking element of this new studio set is a giant 11m x 2.5m rear projection display made up of thirty-three 50” Christie Entero LED tiles with SXGA+ resolution, built on proven DLP technology with LED illumination. This is the biggest display of any news programme in Spain and one of the largest in Europe. The videowall was installed jointly by Christie and Videoreport, a company belonging to the audiovisual group Vértice 360, and a Christie partner in Spain.

In early 2010 the Content & Production Division of Antena 3 considered the possibility of revamping the image of its news bulletin. To do so, they wanted to use the latest innovations in technology: “The idea was to create a different news bulletin, opening a window on the world through a giant display with superb quality image as the centrepiece of the new set, that would also be used as a backdrop for the news bulletin,” recalls Jesús Lozano Corchón, Director of Image and Production at Antena 3. 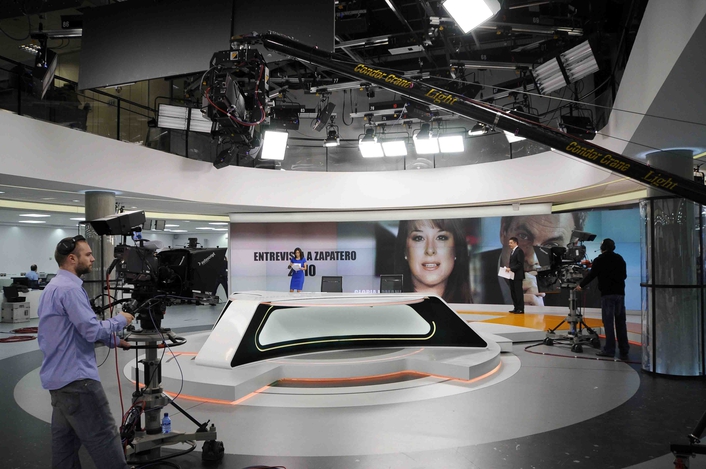 “We were looking for a curved display, because this type of screen is more attractive from a visual perspective. We also wanted an image with the smallest possible seams between the cubes. We required a silent display solution giving off the least heat, because this screen was to be located in studio space with 150 people, given that the Antena 3 Noticias newsroom is part of the set. We also needed a display with outstanding brightness, considering the strong effect on the set of both the sunlight coming from the street and the artificial light. As such, after weighing up all these factors and studying other options on the market we concluded that Christie offered us the best solution”.

The installation was the result of fantastic teamwork involving several technicians from Videoreport and Christie, plus the collaboration of the Antena 3 Engineering Department. The team comprised Marcos Fernández and Carlos Lachica, Business Development Manager and Applications Engineer respectively of Christie Spain; and Mario Carmona of Videoreport. In addition, Matt Reed, Application Support Technologist and Nick Wheeler, independent technical advisor for Vista System Products moved specifically from the Christie EMEA office in UK to collaborate on this project. 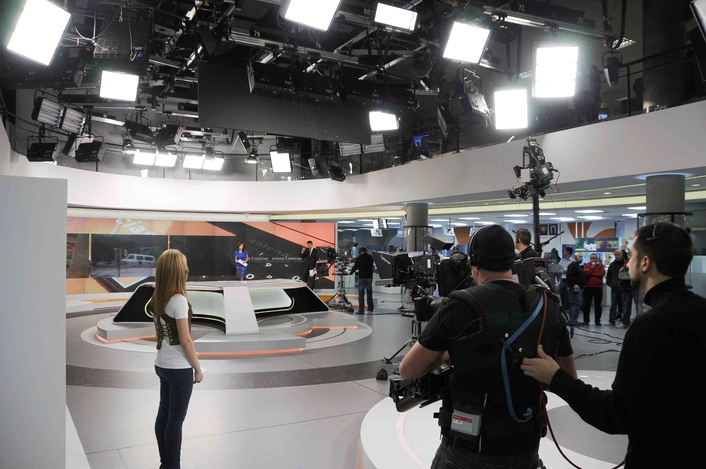 “To be honest, it was a very complicated installation and great effort and time was invested in it,” says Marcos Fernández. “It should be noted that there is a projector inside each of the 33 cubes units comprising this display. This involved some adjustments with regards to the geometry and colourimetry of each tile, requiring a lot of work. But it was definitely worth the effort, considering the incredible result. This is, without doubt, the biggest display with the highest resolution in TV studios in Spain, and also probably in Europe.”

The display solution offers a resolution of 15,400 x 3,150 pixels, giving a total of 48,510,000 pixels. Not to mention, approximately one third of its surface is touch-screen. This application is mainly used for presenting the weather forecast at the end of the news. That said, this display solution offers endless possibilities: “This is a very new project that has just come into being, and as time goes by we plan to explore as many of the possibilities offered by this modular display as our imagination can dream up,” ensures Jesús Lozano.

Antena 3’s modular display is made up by Christie Entero cube units based on LED illumination and featuring 1-chip DLP technology, and specifically designed for control room and videowall applications. There are no consumable components such as lamps, dust filters or colour wheels that need replacing, offering excellent 24/7 performance with SXGA+ and WUXGA resolutions. 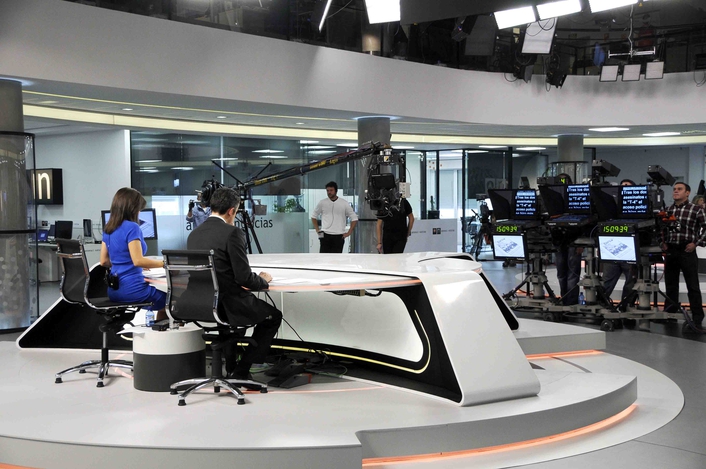 “The Entero LED cube units are the perfect solution if you are looking for image quality and reliability,” claims Julio Chorro of Videoreport. “Considering the flexibility of the system when choosing the DLP technology and the chassis, the Christie Entero LED is the perfect solution for this kind of installation,” he adds. Marcos Fernández places special emphasis on the resolution and colourimetry of the cube units: “The sharpness of colours, particularly the reds, blues and greens, is superb and this is thanks to the LED technology that we use,” he ensures.

Especially noteworthy for Jesús Lozano of Antena 3 is the excellent image quality of the tiles, as well as the low noise level and low heat emissions. “For us it is also essential that the display has a very long service life. It has been designed for long running with a continuous operation of many, many hours,” he adds. Indeed the Entero LEDs are rated at more than 60,000 hours (more than seven years of continuous, trustworthy operation), and do not require continuous service nor any adjustments affecting its operation or leading to unproductive downtime.

The new Antena 3 display is controlled by a Christie Spyder X20 video-processor outputting the different signals. “As soon as we discovered the resolution of such a big display, we realised that we needed more than a simple video mixer to send the signal to the screen, and Antena 3 immediately asked us to resolve this,” points out Julio Chorro. “To tell the truth we didn’t make any other suggestion, because straight away we thought of Spyder X20 due to its power and the obvious advantages with regard to its compatibility range,” he adds. 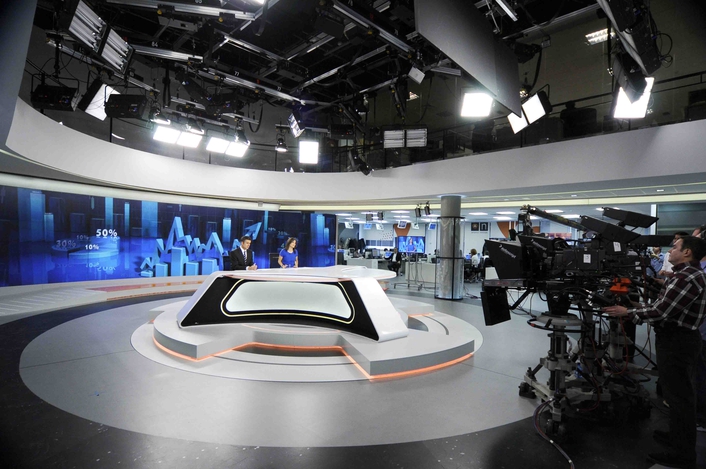 The Spyder system can mix an extraordinary number of sources in multiple windows (up to 32 independent windows), display a picture inside a picture (PiP application), easily define, shape and blend edges and apply a wide variety of effects in real time. “We discovered the Spyder mixer during a Christie road show a year ago, and we found that it was a powerful system full of possibilities. I’d go as far as to say that, right now, it is the most powerful processor in the market of this range of image processors,” says Julio Chorro.

According to Nick Wheeler, who has worked very hard to set into motion the Spyder system at Antena 3: “The imagination that Antena 3 has put into the use of the Christie X20 video processor is amazing. They were able to grasp the concept and possibilities of the processor very quickly and I was amazed to see them already using some of the nice features such as PiP shapes and key frame effects. This gives the whole wall a very dynamic feel, also giving the director more choice and variations in his camera shots. The result on air is very impressive.”

Antena 3 also uses several systems to launch the content displayed on this brand-new screen, such as a Grass Valley mixer, a Dalet system for launching videos, a Chyron digital library and a Vizrt graphic solution. 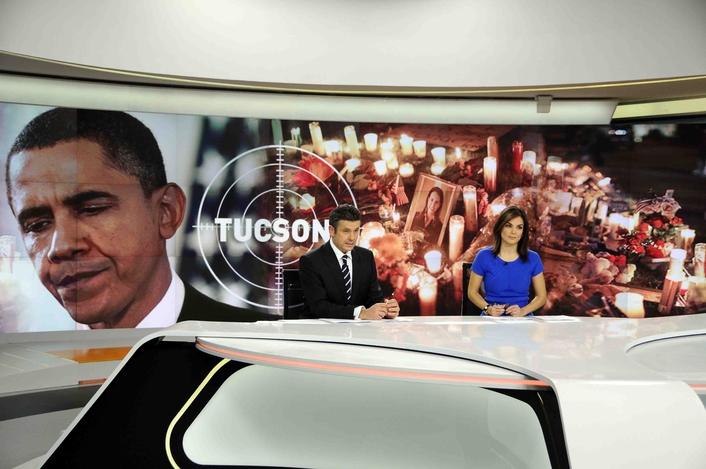 Antena 3’s new broadcasting style also brought with it a whole new studio format, dispensing with the conventional front shot of the seated newsreader to open up different possibilities for presenting the news. Newscasters are now more mobile and dynamic, making the news more accessible by analysing issues together with spectators using a whole range of available elements.

The display serves as a support for newsreaders to transmit the news, giving, for example, the headlines with the powerful back-up of the display, showing data using the latest crisp infographics or making closer live links with roaming reporters and correspondents. “Today the role played by newscasters is much more active. They can now move around the set, making the news more dynamic and presenting them differently,” explains Jesús Lozano. “All this has involved a shift in our way of working; now we have more staff working in production and we even have an outline script exclusively for the display feeds,” he adds. 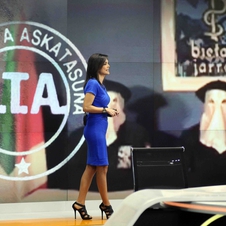 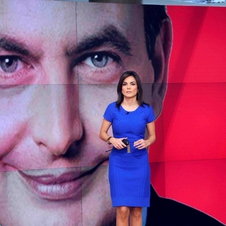 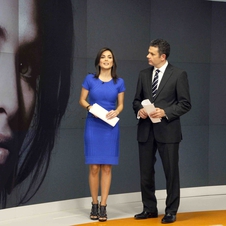 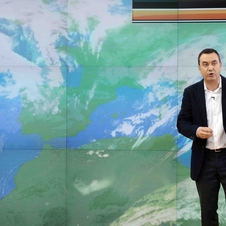 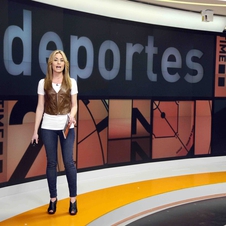 Antena 3 Noticias’ commitment with latest technology for its news service also includes, for the first time ever in Spain, a steady cam and a polecam, added to the usual ‘hot head.’ The lighting has also been adapted to the needs of a 21st century set, with state-of-the-art devices, exclusively using LED lighting and fluorescent tubes to guarantee greater brightness while at once saving energy.

To tell the truth, the brand new display of Antena 3 has given rise to much debate in the broadcasting sector: “The news department and the journalists themselves from our newsroom are greatly surprised by the quality of the display and the endless possibilities it opens up for presenting the news,” points out Jesús Lozano. Meanwhile, Julio Chorro maintains that “this display is a talking point within the sector. We have been praised for this change of image, but more importantly is that our client is satisfied with the end result. This is currently the news bulletin offering the most incredible image of all those broadcast on TV,” he concludes.