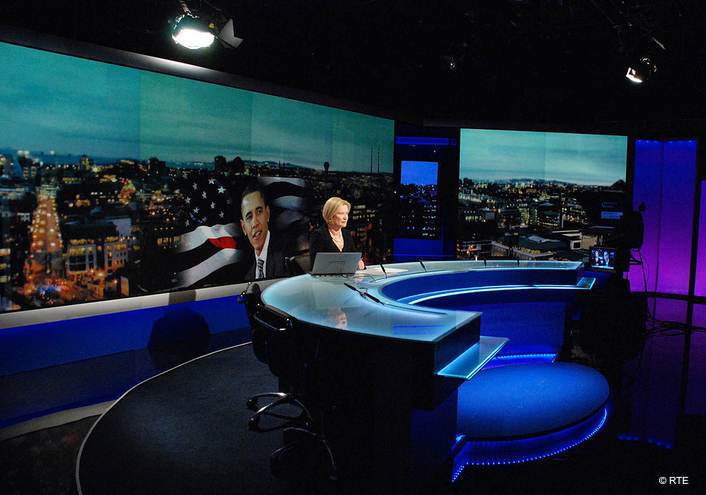 18 Barco Overview rear-projection display cubes
'It's all about you' writes RTÉ in its strategic plan 2007-2011. As Ireland's Public Service Broadcaster, RTÉ is committed to providing value for money services to the Irish public. It invests in both staff and technology in order to maintain the highest standards in all that it produces, commissions and broadcasts. The recent refurbishment of its News studio perfectly represents that commitment to excellence and value for money.
On 9 February 2009, RTÉ unveiled its brand-new state-of-the-art studio during its One o'clock News bulletin. It features three high-bright Barco video walls and a cutting-edge Encore Presentation System, which Barco installed and integrated in barely two weeks.

RTÉ, Ireland’s Public Service Broadcaster, provides comprehensive and cost-effective free-to-air television on two channels (RTÉ One and RTÉ Two). It also has four radio stations (RTÉ Radio 1, Radio 2, lyricfm and Raidio na Gaeltachta) and six digital radio stations, as well as a 24 hour online News service and is publisher of the most popular magazine in Ireland, the RTÉ Guide. Since its inception, RTÉ has earned international recognition across Europe and the US for many of its productions. RTÉ was aware that its News studio needed to be radically overhauled in order to maintain an edge in today’s demanding and competitive broadcasting landscape. “Directors did not like the earlier virtual reality studio with its traditional blue screen. And, indeed, it did look fairly artificial compared to the studios of Sky News and the BBC News,” commented Joseph Lynch, Head of Technology, RTÉ News. RTÉ submitted a tender for a rear-projection video wall and selected Barco’s backdrop solution from five tender bids. According to Lynch: “Barco has a proven track record in broadcasting, supplying solutions to big names in the worldwide market, including the BBC. The demos and presentations Barco gave to us proved that its position as market leader is justified. The technology has a series of innovative features that no other suppliers can match, like the Sense6 active color/ brightness balance system. In addition, Barco’s price was surprisingly competitive.”

Once the contract was signed, there was one more hurdle to overcome: the pressure of time. Although the new studio had been planned for months, RTÉ waited to begin work at the end of December when the studio was least in demand. Within a two-week window, Barco managed to install, integrate and test the visualization “They did a very impressive job,” said Lynch.

Viewers to that news broadcast saw a studio almost doubled in size, featuring three separate video walls which consist of 18 Barco Overview rear-projection display cubes (70 inch) in all. Videos, pictures and graphics are projected onto the walls with the help of Barco’s Encore Presentation System (controller and video processor), which is linked to the RTÉ video server. Encore is the most advanced video processing and presentation control system on today’s market. It offers source selection, advanced windowing features, seamless switching, video effects and integrated control for video presentations.

New look to every show

“Encore allows us to flexibly and easily control and manipulate the graphics and images,” said John O’ Regan, executive producer and director. “It provides, as standard, a wide range of presentation templates and presentation styles, such as picture-in-picture, animations, etc., that can be swiftly modified to entirely change the look of the screens. In this way, we can create different backgrounds for our different programs. Thanks to the great image quality, the backgrounds also give a sense of visual depth and scale, which makes the Newsstudio appear much larger.” 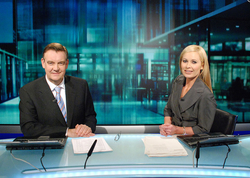 The chosen pictures and graphics all come on screen with exceptional brightness and detail, as the Barco rear-projection displays feature a bright 180 watt lamp system and support 3200K color temperature to deal with specific light conditions in the studio. The unique Sense6 technology, which is incorporated into the video walls, ensures the required brightness and color stability over time and across the entire display by constantlyevaluating and adjusting the color value on each cube over IP. Last but not least, RTÉ praised the reliability of theBarco set-up. As every projection module includes dual lamps with hot stand-by capability, the broadcaster can be confident that every wall module will be available, at all times. “Our new News studio brings us a step closer to our mission to ‘provide distinctive programming and services of the highest quality and ambition. Barco has greatly helped us achieve that aim,” Lynch concluded.