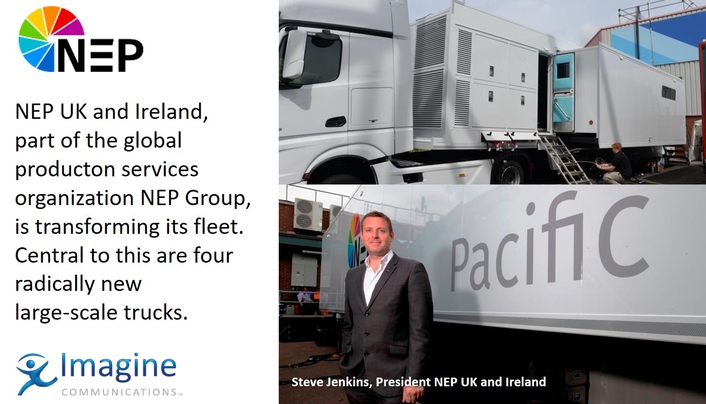 NEP UK and Ireland, part of the global production services organization NEP Group, is transforming its fleet. Central to this is a fleet of four radically new large-scale trucks. This new design follows the loss of some of the company’s assets in a catastrophic fire at its main base at the beginning of November 2015. Imagine Communications was already engaged in discussions with NEP and so sped up its delivery to meet NEP’s requirements.

Less than six months later, the first of four new trucks was commissioned and on the road. The other three are scheduled to follow at monthly intervals. Rob Newton, director of technology for NEP UK and Ireland, gave a guided tour of Pacific, the first of the new fleet, while it was part of the host broadcast operation for the Wimbledon tennis tournament in London. 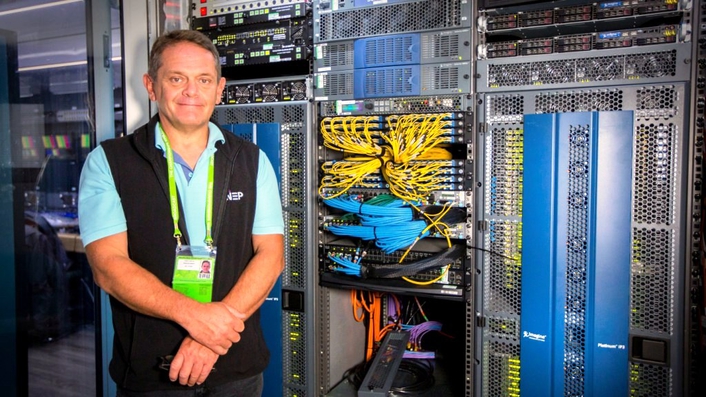 “We have a total of four trucks on site, providing three sets of court coverage and presentation for the home broadcaster,” Newton explained. “We also have various flypack areas in the broadcast centre providing galleries for six more courts and a second presentation service. And we have built two more studios and broadcast galleries for the American broadcasters covering the tournament.”

Pacific’s design is unusual, creating a unified and flexible working space. The trailer is double expanding, but unusually the larger part of the longitudinal expansion is outside the central body of the trailer. This creates an area with plenty of space: headroom in this part of the unit is more than three metres.

This design also allows the main equipment racks to be in the centre, fixed part. As well as improving the balance of the vehicle on the road, this minimises the stress on the key equipment and reduces flex on the interconnecting cables, providing additional resilience.

The design also creates a huge amount of working space – around 90 square metres –, which enables a large replay area to be incorporated as well as production control. Typically an outside broadcast company will deploy two vehicles to major sporting events: the production truck and a second, similarly sized trailer for servers and replay. The new NEP design means that for all but the most complex replay requirements everything can be done from one truck, which reduces cost for the broadcaster and time on site rigging and interconnecting. 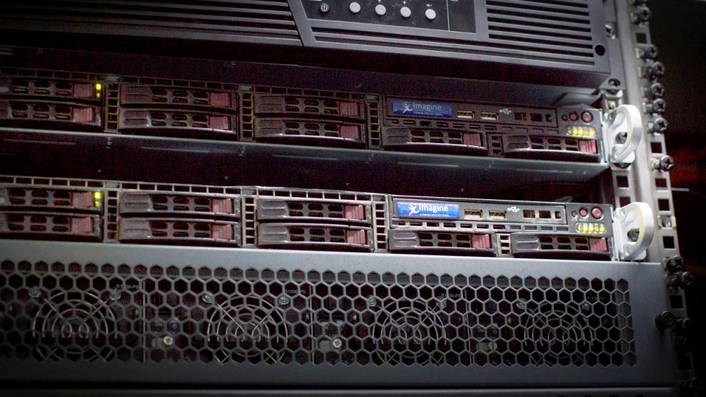 The new NEP outside broadcast trailer design – the other three will be essentially identical to Pacific, with some small layout changes to suit specific client requirements – supports up to 30 cameras and 12 replay I/O devices. It is designed around a technical platform which will meet whatever the project needs. The truck is ready for 4k, and indeed has already done UHD productions.

Flexibility is key: as Newton pointed out the work comes from multiple clients and very different requirements. “It is not just about sport,” he said. “The first 4k jobs we have done have not been sport at all, but theatre-based. We do everything from football to corporate to opera; 4k, 50p, 3D. Everything.”

At the centre of the truck’s technical design are two Imagine Communications Platinum IP3 routers, each in the larger 28RU frame, and giving a total switching capacity of around 1500 x 1000.

“We have been using the Platinum IP3 router for some time in our flypack kits, so it was a natural choice for us,” Newton said. “It is a self-contained system with multiviewers built in, frame synchronisers, audio embedding and de-embedding, and all the processing you are likely to need.

“That is particularly great for flypacks,” he continued. “With a flypack, the more you can get in a box the better. There is less wiring, and less time to rig it on site. It makes it an out-of-the-box solution, rather than needing stacks of separate pieces of kit. 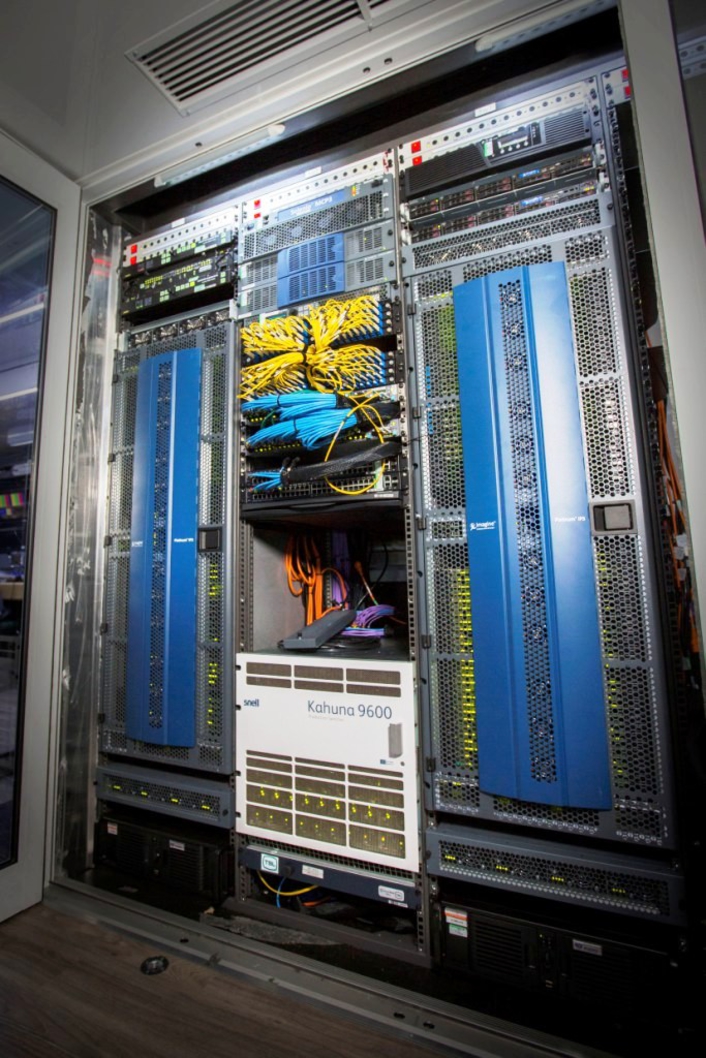 “Standardising on the Platinum IP3 makes it operationally convenient, too,” Newton explained. “We have about 15 vision engineers and 12 sound engineers on site, and rely heavily on freelancers. All our staff and key freelance pool had become familiar with the router and its software, which is a big thing. Having a familiar interface helps no end. It makes projects easier to crew and easier for them to understand. You open up the box and it is all there. It should all just work – and it does.”

One of the design considerations was that, while each of the new trucks is completely self-contained, there will be occasions where two or more vehicles need to work together.

“That is another reason we went down the Platinum IP3 route,” Newton explained. “We elected to fit some of the I/O slots with fibre SFPs, using CWDM. It means we can pick any pair of trucks and connect them with just two strands of fibre. That gives us about 200 three-gig signals shared between them. Sources available in one truck are now available in the other, transparently.

“In the old days that would be a lot of cabling; now it is two lengths of multicore fibre. That means there is practically no room for error and, because it is two cables rather than hundreds, virtually no rig time.

“And remember we can do all of this in 4k as well as HD,” he added. “We have both 4k and HD running in the router at the same time, because much of the world is still HD and we have to provide two outputs.”

The Platinum IP3 router integrates signal distribution, audio multiplexing and de-multiplexing, flexible multiviewing and test and measurement, alongside precision routing, in a compact space. Its unique design allows digital audio and video to be switched alongside IP signals if required, although at present NEP has made the operational decision to stick with baseband signals. “We needed to design and build this new generation of trucks really quickly,” Newton explained. “We felt that going down the IP route at this stage would have been more of a gamble for us. 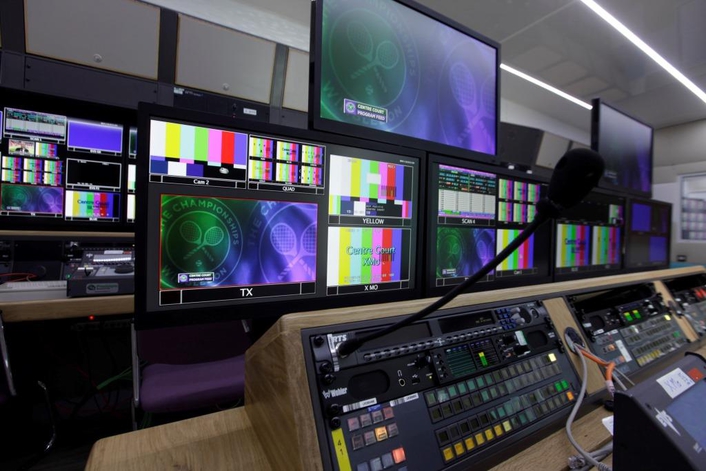 The trucks also include a large amount of critical infrastructure equipment from Imagine Communications, including Selenio MCP units, particularly for up- and down-conversion between HD and UHD; and Selenio 6800+, Selenio X100 and Selenio X50 modular units for signal processing, monitoring and distribution.

That design philosophy extended out into the huge installation it had built for the tennis tournament. “It is a massive challenge for both equipment and human resources,” according to Newton. “It might only seem like a two week event, but from our point of view we have been planning it for six months. Equipment has been acquired and wired for that length of time.

“All of our systems, in our trucks, our flypacks and our temporary installations, are based around the Platinum IP3, because of its flexibility,” he continued. “I think we have a total of eight 28RU frames here, plus one of the smaller, newer, 15RU units. Alongside that we have probably 50 or more Imagine Communications test and measurement scopes, and vast quantities of glue: hundreds of DAs, embedders and so on.

“The reason we went down the Imagine Communications route is the Platinum IP3 itself,” Newton asserted. “We have looked at other solutions, and we have looked at the other manufacturers. But the Imagine hardware is fantastic. Before the fire we were kitted up with IP3s in our flypack department, and we are convinced it is the way to go forward in our trucks. 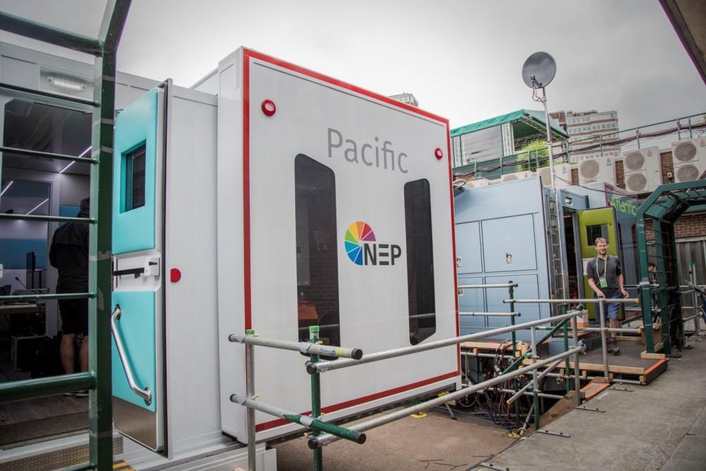 “The relationship with Imagine Communications has been excellent. Whenever we have gone to Imagine to purchase new routers we have asked for new features to be added, parts of the software to be tweaked, and they have always been obliging. In an outside broadcast environment, every day is different. The Imagine Communications Platinum IP3 gives us the flexibility and functionality we need.”