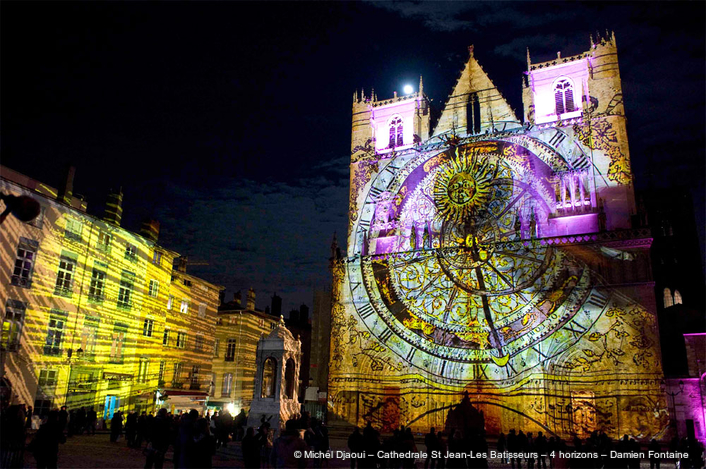 Lyon Illumination
Since the 17th century, the Festival of Lights in Lyon has been closely linked to the city’s religious history. In 1852, a statue of the Virgin Mary erected at the Chapel of the Hill of Fourvière was to be inaugurated on September 8th, but the Saône river flooded and forced the cancellation of the ceremony. The inauguration was postponed to December 8th, Immaculate Conception Day. That December evening, the people of Lyon spontaneously put lights in their windows, and the Festival of Lights was born!

Ever since that time, the festival has been repeated each year: the citizens of Lyon now follow the tradition every December 8th of placing candles in their windows and going out into the streets to celebrate. Since 1989, the City of Lyon has organised events over a period of several days to coincide with the Festival of Lights. In 2009, Lyon’s Festival of Lights saw lighted displays throughout the city from 5th to 8th December, creating an incomparable, magical display, and Christie is proud to have played a part. 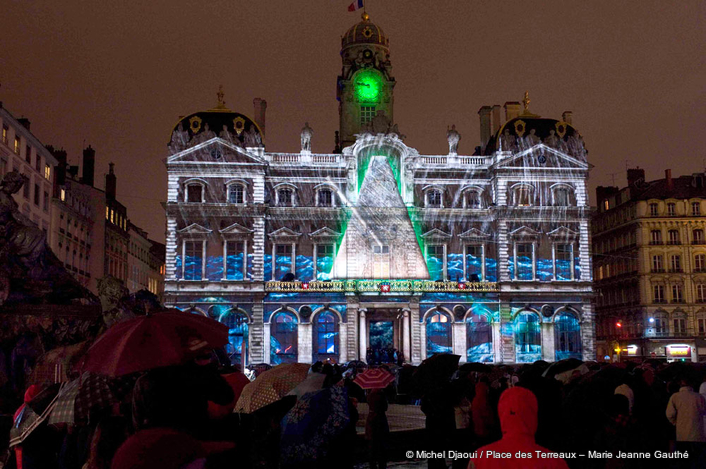 “We worked on the string of displays running along the banks of the Rhone”, said Audio-Technique Director, Krim Ouraghe. That course, running some 1500 metres through nine stages, is based on the theme of “Temps” (which means both “time” and “weather” in French). Based in Saint-Etienne and Villeurbanne, the Audio-Technique company provided the audiovisual equipment set up at the entrance of the Parc de la Tête d’Or, at the end of the course along the Rhone, illuminating a large hourglass, some six metres high and four metres wide. This work by the scenic artist Yves Moreau, entitled “Tic-tac” required four Christie projectors: two Christie 3LCD LX1500s and two Roadster S+20K 3-chip DLPs. A Green Hippo Hippotyser server was used to route four feeds of images created by the artist through the projectors onto a white Lycra screen made in the shape of an hourglass. “For three years now we’ve relied on Christie equipment to set us apart from our local competition. The range of projectors that we have gives us reliability and the power to handle major events,” concludes Krim Ouraghe. 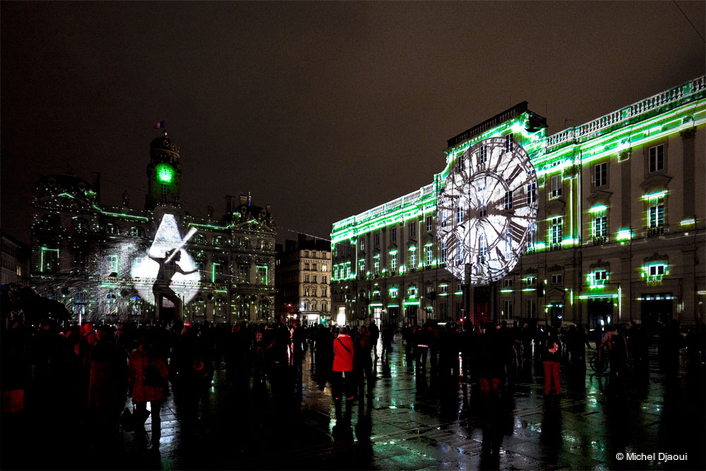 In the heart of Old Lyon’s historic district, scenic artist Damien Fontaine paid tribute to the craftsmen who spent more than 300 years building the Cathedral Saint-Jean. Two giant hands knead the façade of the cathedral and present the successive phases of its construction. To start, they erect the massive columns of a Gallo-Roman temple. Next, the giant hands progressively shape the cathedral, from primitive outlines to the final modern contours. Each step, every detail, is revealed through spectacular effects with impressive realism, leading up to the final spectacle: the façade parts to reveal the interior of the cathedral. Voted the public’s overwhelming favorite, the “Bâtisseurs” display won the Festival’s coveted Trophée des Lumières. This show enveloping the Cathedral Saint-Jean required the power of two Roadie HD+30K projectors (30,000 lumens), each configured to cover part of the façade. “This option was suggested by Joël May, Technical Director for Alabama Media” stressed Damien Fontaine, while noting that the two Roadie HD+30K units “did their job marvelously”. “In order to get the best possible output, the highest quality, most precise image, we chose to go with the Christie HD+30K projectors with Twist cards”, Joël May stated. “The included Twist Pro software let us bend the image to fit the various features of the Cathedral’s façade.”

For the Lyon Prefecture, Damien Fontaine decided to transform the edifice into a candle factory: The candles produced by the “factory” are gravely upset by the theft of the “master candle”, the creator of his brethren who are destined to adorn the windows of the houses of Lyon. In an encounter that would make Tim Burton proud, goblins and other characters mix it up in a show orchestrated by VLS and six 4:3 Christie Roadster S+20Ks used in pairs to achieve perfect coverage of the face of the Prefecture. Installed vertically, two Roadster S+20Ks covered the central portion of the projection area. 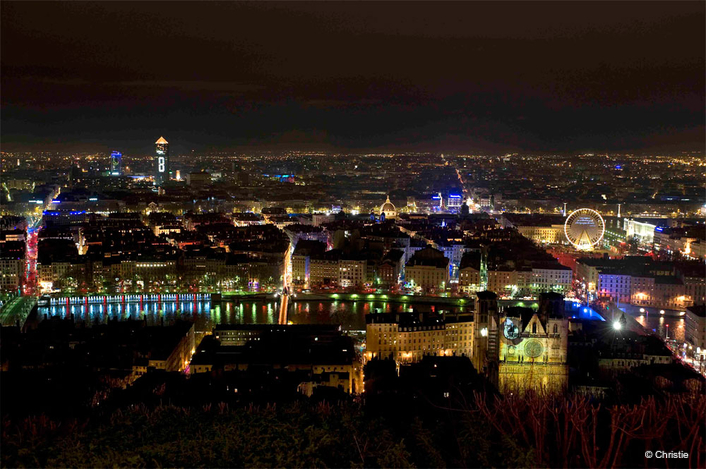 “We also worked on the show staged by Marie-Jeanne Gauthé at the Place des Terreaux”, stated Richard di Meglio, CEO of VLS. To get optimal power, the company provided nine Christie Roadie 25Ks grouped in bunches of 3, putting 75,000 lumens on each coverage area, for a total of 225,000 lumens. “The show was done using uncompressed material on our proprietary players in a way that blended the quality of the output of the Christie projectors and their 2K matrix with the quality resolution of the images output at a fast 2GB/second. The result was definitive, with rich, high fidelity reproduction of contrast and colour”. Entitled “Jouons avec le temps” this standout at the Festival of Lights “illustrates the flow of the seasons through various meteorological conditions,” relates Marie-Jeanne Gauthé. This original scenography offers a schematic and fantastic vision of weather flowing from the past into the future. Through the various sequences, spectators see successive scenes in which the buildings of the Place des Terreaux are first covered in ice, then submerged under water, then warp and finally crumble under oppressive heat. The final touch is in the courtyard of the City Hall where a giant metronome generated by a laser marks the passage of time.

Used in four of the major scenographies on display from 5th to 8th December 2009, at the City of Lyon’s 11th Annual Festival of Lights, Christie’s 3-chip DLP projector technology made a major impact and provided the means for its partners to put out some 475,000 lumens through 21 projectors.