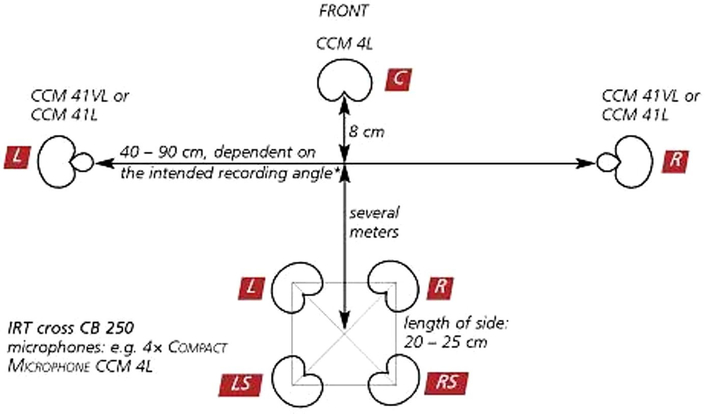 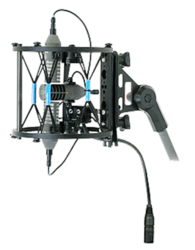 ”Double M/S” is an improved version of the well-known M/S stereo recording technique. In addition to a frontfacing cardioid or supercardioid ”mid” microphone and a figure-8 ”side” microphone, a rear-facing directional microphone is set up. The front- and rear-facing microphones share the signal of the figure-8 microphone so as to form two complete, back-to-back M/S systems. One M/S system then provides the three front channels (the center channel signal being provided directly by the mid microphone of the front system), while the other system provides the two surround channels. An arrangement of this kind allows flexible processing of the stereo surround image width and post-production adjustment for both of the M/S pairs.

The IRT microphone cross is useful as a four-channel arrangement for room tone (for example in combination with the OCT surround system, and can also be used for full surround (e.g. 360° cinema sound recording or for other playback arrangements in which the speakers are placed in the four corners of a square). This set comprises the following items:4× CCM 4 Lg compact microphone (cardioid), 1× CB 250 mounting bar, shared wooden case 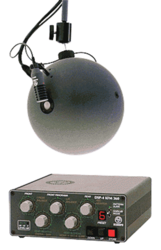 The central unit in this system is the KFM 360 sphere microphone. It uses two pressure transducers and can also be used for stereophonic recording. Its recording angle+ is ca. 120°, thus permitting closer miking than the pure stereo microphone KFM 6 (90°). The necessary high-frequency compensation for the pressure transducers is built into the processor unit.

Surround capability is achieved through the use of two figure-8 microphones, which can be attached next to the pressure transducers by an adjustable, detachable clamp system with bayonet-style connectors (SGC-KFM). The main axes of these two microphones should be aimed precisely forward.

The DSP-4 KFM 360 processor derives the four “corner” channels (L, R, LS, RS) from the microphone signals. A center channel signal is obtained from the two front signals. An additional output channel is provided which carries only the frequencies below 70 Hz. To avoid perceiving the presence of the rear loudspeakers one can lower the level of their signals, delay them and / or set an upper limit on their frequency response.

The front stereo image width is adjustable, and the directional patterns of the front-facing and rear-facing pairs of “virtual microphones” can be chosen independently of one another.

OCT Surround (Optimized Cardioid Triangle Surround) is a five-channel recording method devised by Dr. Günther Theile, which does not use matrixing. In this approach, directional microphones are set apart at moderate distances (up to 1 meter), giving good separation between the front sectors L/C and R/C. It also offers good localization, a large listening area and a natural-sounding overall impression. 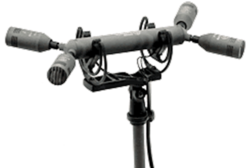 The “ORTF Surround” recording method is a new system for the pickup of surround ambience. This microphone arrangement and its sonic characteristics are quite similar to those of the well-known “IRT Cross“ designed by Günther Theile. Both the 360° imaging and the spatial impression are of optimal quality. This is achieved with a high degree of signal separation among channels, based both on arrival-time differences and level differences.

A special mounting bracket is elastically suspended so that the two microphone capsules maintain a distance of 17 cm and an angle of 110° to one another as prescribed for ORTF stereo recording. A matching basket-type windscreen with “Windjammer” is also included. This set has been developed in response to the wishes of numerous customers specifically for applications in film sound and the pickup of sports events.ORTF is often used as an ideal technique for ambient recordings in stereo in addition to itsclassic application for music recording, since it offers both well-balanced sound localization anda good impression of spatiality. The Schoeps “ORTF Outdoor Set” is particularly safe from wind noise and solid-borne sound due to the use of a basket-type windscreen and a high-quality suspension. It is also very easy to set up — a considerable advantage in everyday use. The two CCM 4 compact microphones included in this set are full-quality studio microphones which can also be used in many other recording applications.