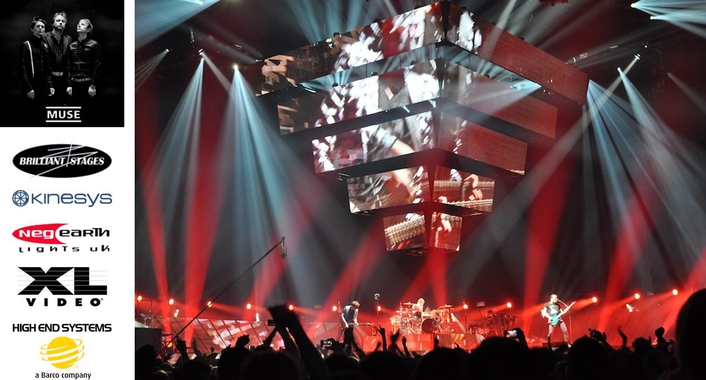 LD Oli Metcalfe puts the new Hog 4 through its paces
Out once again on tour with Muse, lighting designer Oli Metcalfe is the first LD to use the new High End Systems Hog 4 control system. During a recent string of shows in the UK and Europe, Metcalfe had the opportunity to swap out his Full Boar console for the new Hog 4 desk. Metcalfe's design is already turning heads for its creative implementation of video surfaces across a giant articulating pyramid that symbolizes the system of power and global politics; his approach to networking and control is similarly cutting-edge.

Metcalfe, who has worked with Muse for the past 13 years, says converting his show to the Hog 4 protocol couldn't have been any easier. "I've been on a Hog for many years," says Oli, "and jumped onboard the Hog 3 desk back in 2006. While I started with the Full Boar for this campaign, in the past few weeks the Hog 4 was released, and I've managed to get my hands on one. I have to say, I'm really looking forward to the future with this console. It's going to be awesome. My show transitioned straight from the Full Boar to the Hog 4 with only minor modifications required in the view and the setup, just because of the bigger screens on the new desk. I've now done three shows on the Hog 4 and it's been flawless. It's really fast and responsive, and it's a great interface because you've got so much screen space to lay out your tool set, and put everything just where you want it."

The designer says he enjoys the extra real estate afforded by the Hog 4, but appreciates the familiar ergonomics of the Hog family of control systems. "The Hog 4 is a bit larger than a Full Boar, and I think that suits it. There's such a big acreage of touch screen space, but it's still got that familiar layout and feel that everybody knows and loves. It has the playback with the shadow keys at the bottom, and that nice responsiveness as well as positive contact of those buttons, and at the same time there's a really ergonomic programming area to the right, which is very important to me, as I work predominantly in the bottom right corner of the console. It was crucial that the syntax was retained; I think that's going to be key for a lot of users. They'll be able to jump straight on it, load their shows and off you go; that's a big deal!"

While getting up to speed with the Hog 4 was effortless for Oli, this tour is Muse's most complex production to date, with control and networking perfection being integral to its success. "The complexity of what's going on here is pretty deep. I feel I've pushed myself in terms of what I like to do with technology, and this new production is fairly bleeding edge."

Metcalfe started the tour with a Road Hog and two fader wings, along with an extra desk to the side. "My spare desk doesn't run as a tracking backup," Oli comments, "because I shouldn't have to do that … the sound engineer hasn't got a spare desk. With a reliable network infrastructure in place, there's little or no chance of a critical show failure. I'm not just running the lights, I'm running everything visual … cameras are coming in to me on Catalyst and I'm controlling them via the Hog, so fundamentally everything you see in the show environment is controlled by the Hog. It's interfaced to the DPs and ArtNET nodes down a fiber safety ring between FOH and stage. Some users have been burned in the past by inferior networking setups which in turn caused issues with reliability; issues such as inferior network switches and dodgy cables can play their part in upsetting a system's performance and reliability. Thankfully though, understanding in this field of our industry is getting better now and proper products are out there to help us build reliable networks for live production. High End have made a huge effort to make sure this console is right out of the gate. I ran two shows where the Hog 4 was tracking the Full Boar with a midi cable, and for the next show I put the Hog 4 in place of the Full Boar, connected the two Road Hog wings to it and haven't looked back. It's been rock solid."

To facilitate the pyramid's movement, Oli is using the Kinesys K2 system. The lighting, rigging and motion control elements are supplied through Neg Earth Lights. XL Video is supplying video, and Brilliant Stages built the pyramid structure and stage. Metcalfe explains, "We can move all the elements of the pyramid independently. All the cable management is done from the grid; the pyramid just looks complicated because it's so dynamic in terms of how it can move and set itself for different looks." A six man crew joins Metcalfe on tour, with crew chief Jonathan Sellers at the helm. "Jonathan has done four Muse tours now as crew chief," says Oli, "and I wouldn't have it any other way. He's fantastic to have on the road, and see's the big picture from all angles of production in order to maintain the smooth 'day to day' flow required for a efficient touring show."

High End Systems TechnoArc luminaries also augment Oli's design; the LD uses ten of the fixtures discretely recessed within the stage as one of the show's many unique elements. Metcalfe says, "I was looking for a wash light that could be recessed so that only the front of the head was popping out. I chose the TechnoArcs because they've got such good output to power ratio. They're brighter than a 1500 watt wash light, and that just shows you boldly the advances in optical technology that High End have always reached for.

"The TechnoArc outperforms not only in luminosity but also in its feature set. It's got a really nice, soft-edged flat field beam that can also go down into an eerie columnated ACL style beam look - one that obviously has found its way into a lot of designs with the Sharpys. I wanted a versatile fixture that could do a nice soft edged wash, among other things. Having the columnated beam is actually more useable than I first imagined, and its source is amazing. I was expecting a sub 30 kilo package that would be 575 bright, not something that could be brighter than a 1500 watt."

As is true with other High End Systems products he's used, Metcalfe says he finds the TechnoArcs to be 'quite consistent' in terms of dichroics, the color balance and the lamp color temperatures. "People that come to a Muse show know there's going to be something a little bit 'special' they can cast their eye over," says Oli, "and the TechnoArcs fit the bill. You can put it in a really nice 20 degree stage wash, and then just pop it - and it goes in to that sharp hard-edge beam. Having those kind of dynamics is why I've always used High End's stuff. Also, the mechanical shutter is so important. It's really fast and you can get really nice effects."