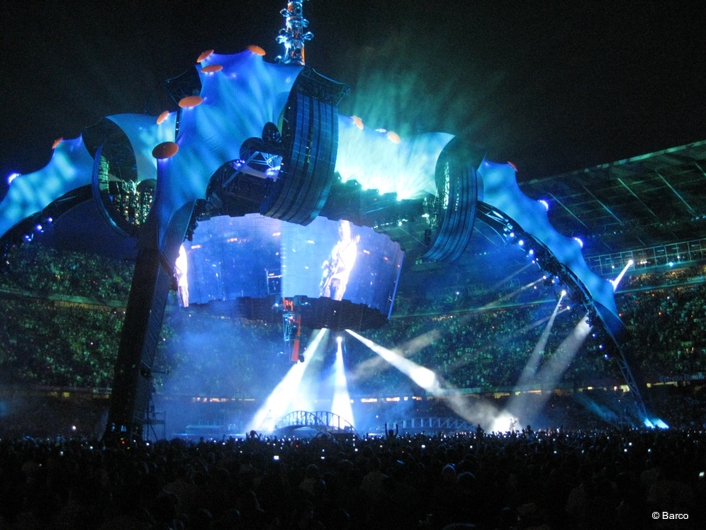 The Concert in Barcelona
Barco is proud to announce the world’s first transformable LED screen for U2’s latest world tour. With its 360°shape, the LED screen surrounds the band while performing and can change shape in alldirections during the concert, For the third time this millennium, the Barco – U2 cooperationresulted in a revolutionary approach to video, this time totaling more than 500,000 pixels ofvideo, making it the biggest LED screen ever used in concert touring. U2’s worldwide tourkicks off 30 June in a sold out Camp Nou stadium in Barcelona, Spain. 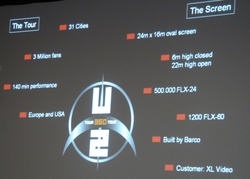 Tonight, all eyes will be on Barcelona for the premiere of the new U2 Tour 360°. The stage and showwere created by long-time U2 designers Willie Williams and Mark Fisher. With the help of ChuckHoberman and Barco their vision of a 360° moving video screen was turned into reality. Barco providedmore than half a million transformable LED pixels (FLX), which are integrated into a transformablestructure designed by Barco’s Innovative Designs, based on a Hoberman invention.. The resulting giantLED screen has a 24 by 16 meter diameter and changes shape in all directions, making U2 the first bandever to go on a tour with a transformable LED screen. 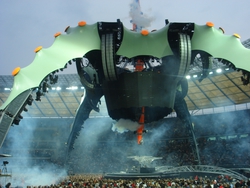 Willie Williams, U2 show designer, says “Video is the most powerful tool you can have on stage. But nowthat video is so ubiquitous in rock stage setting, we needed a very extreme change of canvas to beheard. The transformable LED gave us the chance to create a transparent 360° moving video element,unprecedented in this industry. It is the icing on the cake on this design.”

“It is thrilling to see the work I have been doing with transformable structures expressed in such awhole new way,” Chuck Hoberman adds. “The screen is like a living thing, it continuously changesshapes and forms and the video acts like live skin on it. It is one of the most fascinating objects in theworld now.” 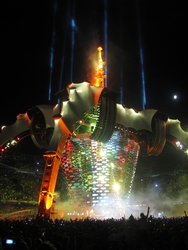 “We wanted to create something that was bigger than a conventional stage. This tour was big enough tomake a purpose built structure,” says Mark Fisher, U2 stage designer. I wanted to create a transparentstage and really needed a video screen that would fit in that environment, a round screen that wouldnot block the view for the audience. Barco’s FLX gave us the chance to create this. We were happy to beworking with Barco again; they have helped very well in the past and delivered an extraordinary productfor this show.”

Carl Rijsbrack, Vice President product management, comments: This is the third time we are supportingU2 in the new millennium and in response to the market’s demand for unlimited creativity, we havecreated the FLX single pixel platform. The FLX LED pixel modules can be mounted onto any possiblestructure, creating any shape designers want to.” 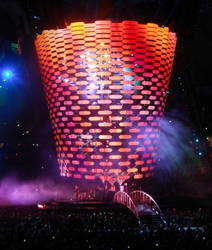 Frederic Opsomer, Vice President of Barco’s Innovative Designs, adds “There have been manyevolutions in the LED video market for concert touring, from a fixed IMAG screen to moving screens totransformable screens now. This is the fifth time I have been working with U2 and it is again a big honorto be part of it. The entertainment business is constantly asking for new and innovating products, evenin these difficult times and the U2 360° tour is a perfect example of this.”

In addition to the giant LED screen, Barco integrated a total of 1,200 FLX-60 pixel modules surroundingthe edges of both the A and B stages and the bridges. The stage LEDs provide an extra dimension to thegraphic show projected on the screen. Almost one thousand customized lights, specifically designed forthis tour and manufactured in the Barco premises, light up the stage canvas for an even morememorable show.

The Concert in Berlin 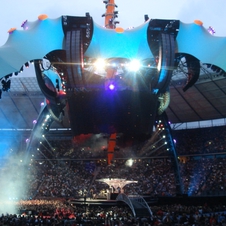 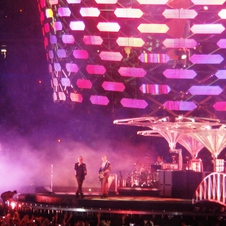 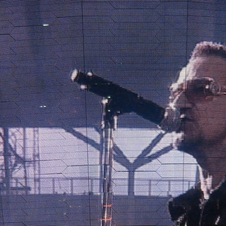 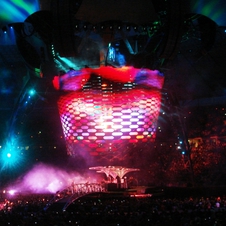 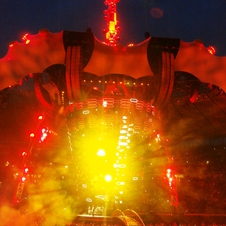