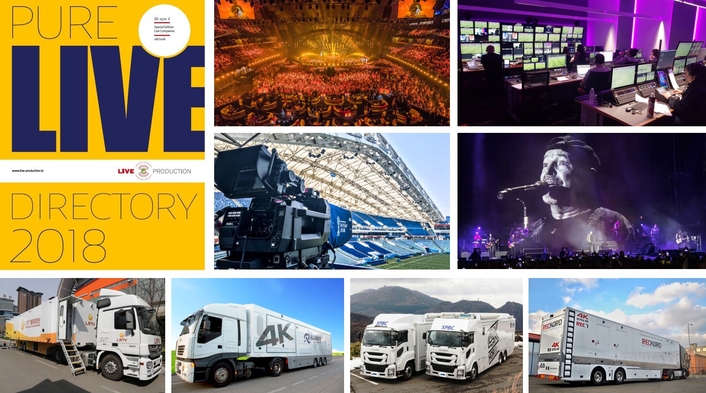 The 2018 edition of the PURE LIVE Directory is out and will be availabe at the IBC Media Allee on booth 32 or via the online shop https://www.live-production.tv/shop. We present 20 new HD/UHD trucks in quite detail. The presentations include trucks from AMP VISUAL TV, Antenna Hungaria, Cinevideo, ERR, Infinity, Liaoning TV, LRT, Mediacam, Mediapro, Mobile TV Group, NEP Australia, NEP Belgium, NEP Sweden, NEP USA, Reckord, Studio Berlin, SMT, Sky Perfect Broadcast, Telegenic and Professional Show. In addition, we highlight IP Live Production in Australia. To overcome the obstacles of distance and location in remote production, NEP created centralized Internet Protocol (IP) production centers in Sydney, NSW, and Melbourne, VIC. Another highlight is the production of the international signal of the FIFA World Cup in Russia. In addition, we had a look to the Eurovision Song Contest in Lisbon, and we visited Italian superstar Vasco Rossi at the Stadio San Nicola in Bari together with 50,000 adoring fans.

The production services [and marketing] for events, TV and multimedia are the core business mission of Global Production, a company born from the profound experience of different professions to constitute a solid, multifaceted and functional business patrimony, guaranteeing the corporate assets of the clients they turn to it. The internal and external technologies and professional skills that Global Production uses are the response assessed from time to time [with the customer] to meet the needs of each individual project. Competence, creativity and competitiveness characterize the design and operation of Global Production, its audiovisual productions and the solutions for airing and networking that it is able to offer. 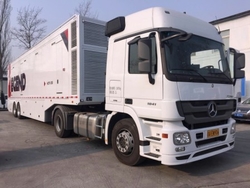 OB Truck Legend is based in Beijing and is able to handle 20 HD Cameras via a Sony MVS mixer. The monitor wall consists of 22 LMD-A220 Sony displays. The Sony Cameras including a HDC-4300 are equipped with Canon lenses and come with Miller tripods. Also on Board are Axon multiviewers and digital glue. VTRs on board are from Sony and Panasonic while the SloMo machines come from EVS. The video matrix comes from Utah Scientific. Audio is mixed with Yamaha consoles and Intercom is handled with Clear-Com gear. 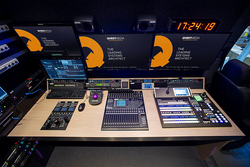 Manoeuvrability, flexibility and an innovative vehicle concept: Ruptly’s new and mobile production fleet offers state-of-the-art equipment – despite its compact size – for versatile production. As a designer and systems integrator, Qvest Media planned, installed, commissioned and supplied all technical systems in addition to undertaking the actual vehicle conversion. Qvest Media solved the special customer requirement of being able to drive both special vehicles with a normal car driver’s licence by employing an innovative body and lightweight construction method, which was developed in close cooperation with its partner Carrosserie Akkermans. 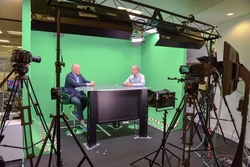 The network, which provides original news, highlights and analysis for motorsports fans across the globe, needed a production hub that could not only deliver bespoke, original content for Motorsport TV, as well as its online and social media channels, but also act as a blueprint for further studios throughout its global outlets. Designed by JAM Creative Consultancy, the compact studio is housed within Motorsport Network’s offices, to allow easy access for journalists, experts and engineers to participate in the various segments. “In order to achieve the look and feel of a large scale, professional broadcast studio within a very restrictive office environment, greenscreen and virtual elements were essential elements in our studio blueprint,” explains Julian Okines, executive producer at JAM Creative Consultancy. 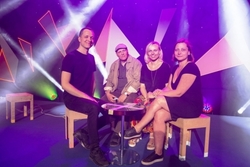 Estonian Public Broadcasting (ERR) has recently invested in new Robe Spiider and DL7S Profile LED luminaries. The latest Robes were used in “Ajujaht” (Brain Hunt) a reality show / competition that looks for the best new start up ideas. This was recorded in two studios, the main one where the teams of finalists pitched their proposals live to the judges, and Studio 4 which acted as a green room, Eurovision style! The lighting for this was specified by the series’ lighting cameraman Raul Priks and director Krista Luts, and the show was produced by Hannela Lippus, with Mihkel assisting Krista as the vision mixer. 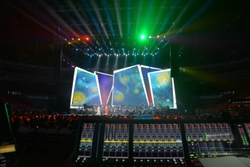 AURUS platinum, the flagship of Berlin-based manufacturer Stage Tec, made its debut as a FOH console in China. At the end of July, a cross-over concert with music by Zhang Hong Guang, one of China's most popular composers, was performed in front of an audience of 18,000 at the Cadillac Arena in Beijing. The AURUS platinum was equipped with 32 faders and integrated into a NEXUS network with six Base Devices and a STAR router. CCTV, China's national state broadcaster, recorded the event, which aired on the CCTV-3 music and entertainment channel. IFTT was the technical service provider. 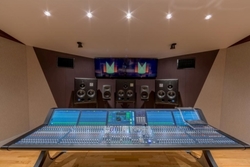 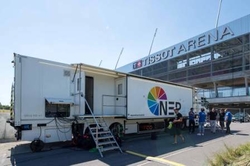 With an HDR upgrade on two of NEP Switzerland’s OB Vans used for the production happening before to the new season, the company is a pioneer in UHD/HDR production. Both vehicles were conceived and delivered by German-based system integrator Broadcast Solutions and upgraded with additional Grass Valley equipment to meet Teleclub’s demand for UHD/HDR production. With this setup, NEP Switzerland and Teleclub are the first and currently the only team that produces UHD/HDR football matches on a regular basis and as a daily business. To advance NEP Switzerland’s OB Vans UHD-41 and -42, both on duty producing the Raiffeisen Super League, the company upgraded all of their Grass Valley LDX 86N 4K cameras with perpetual HDR licenses. 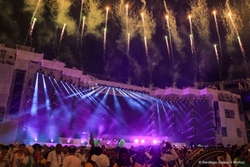 Robe at the Top of the Games

Nearly 200 Robe moving lights graced the spectacular lighting scheme devised for the Opening Ceremony of the 2018 Central Americana & Caribbean Games, staged in the Estadio Metropolitano Roberto Meléndez, in the key Colombian port city of Barranquilla. LD John J Orduña Sarmiento was part of a highly talented team involved in the show’s technical production, for which lighting equipment - including all the Robe fixtures - was supplied by leading Colombian rental company, Línea Estratégica based in Medellin.

eSports has taken the world by storm. With market revenue forecast to reach $1.65 billion by 2020 and a recently confirmed place at the 2022 Asian Games in Hangzhou, China, eSports has evolved beyond the realm of niche entertainment and cemented itself into the mainstream. With growing advertising revenues, a global online audience of over 300 million, and construction of dedicated stadiums, today’s players are competing for multi-million-dollar prize money. Moreover, as the availability of high bandwidth streaming media platforms increases, eSports is reaching wider global audiences and attracting investment of entertainment companies, broadcasters and brands. 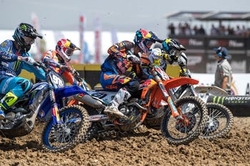 The band performed at festivals including the Nova Rock Festival in Nickelsdorf, Austria and the Moon and Stars Festival in Locarno, Switzerland, as well as others in Germany and Finland. The guys were backed by a large LED screen, displaying a mixture of live camera feeds of the on-stage action and pre-created visuals, which were produced by Lightborne. “We wanted to reproduce the look of the band’s recent arena tour, where we had five separate, framed, LED screens hung above the stage,” says Hornung. “To achieve this, we needed to re-programme the visuals to create five virtual screens to be displayed on the one large LED wall that was available to us at the festival appearances.

Simple Minds and The Pretenders

Event specialist, LHG Live, has produced and promoted the entire tour for the two globally renowned bands, and is utilizing a live solution that relies on Blackmagic Design for acquisition and IMAG relay which it developed with support from reseller CVP. Three URSA Broadcast cameras, equipped with Blackmagic Camera Fiber Converters and a range of Canon B4 lenses are front of house; one as wide angle and two pit units to capture the headline acts. The B4 mount allows the event specialist to use existing lenses and provides more flexibility when hiring in lenses. 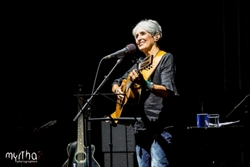 After sold-out performances in Europe, folk legend Joan Baez continues her 2018 "Fare Thee Well" tour in North America with both FOH and monitors mixed by engineer Jason Raboin of Klondike Sound on an Allen & Heath dLive C Class C3500 Surface with CDM48 MixRack. "I’ve worked for Joan for fifteen years and she’s an amazing performer,” said Raboin. “At one point, she simplified to a three-piece band and I started doing both FOH and monitors so I knew I needed a better console.  I did a lot of research and talked to some people I really trust. Then, I got to demo a dLive. Even with just music playback, it sounded better than what I was using. So I went for it and it has been great.” 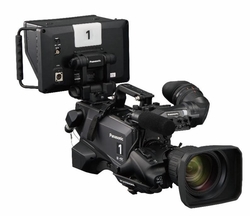 With its recently announced software upgrade, Panasonic’s AK-UC4000 will include the capability for 4K output via one of the 12G-SDI outputs from the camera head. When combined with the updated IMT Vislink HCAM transmitter, the AK-UC3000, AK-HC5000 and AK-UC4000 will all allow full HD wireless video transmission, with 4K transmission using the UC4000.  “As a worldwide leader in the development of broadcast and studio wireless camera technologies, IMT Vislink is honored to be able to collaborate with Panasonic to bring this innovative product to the market,” says Dean Chettra, Global Channel Manager at IMT Vislink. “By joining together IMT Vislink’s recently updated HCAM wireless camera system with the latest firmware for Panasonic’s studio cameras, we are enabling an end-to-end video capture, transmission and receiving workflow for various broadcast applications.” 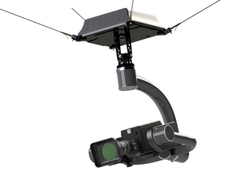 Robycam Compact will premiere at IBC2018

Robycam Compact is a smaller version of the Robycam 3D cable-suspended camera system. Same as its bigger brother, the camera can move freely through space in vertical and horizontal dimensions allowing to shoot spectacular images from all viewing angles that no other camera can achieve. Robycam Compact is designed for TV studios and small and medium-sized sports venues, for example, basketball or ice-hockey halls. The winches of the system may be easily placed in venues with limited space still providing enough pulling force to maximise the working height of the camera. 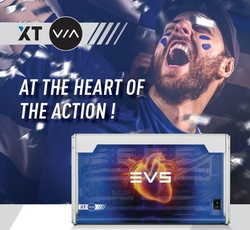 Ekstraklasa Live Park – the top Polish football league’s official broadcaster – will integrate a brand-new replay and content management workflow from EVS, the leading provider of live production solutions. The technology will be integrated into the broadcast service provider’s new UHD-4K, HDR-ready outside broadcast truck to produce higher-resolution live programming of the Polish league’s matches. The unit will be integrated by Broadcast Solutions, Europe’s biggest OB van manufacturer and fitted with four new XT-VIA live production servers. To support the servers’ operation, the OB facility will also feature an IPDirector live PAM system, an LSM Connect and XFile3. The elements of the EVS workflow will be provided by EVS’ Polish partner, twenty4seven. 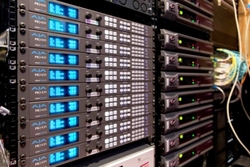 “When we started work on the new OB van, we initially wanted to introduce 4K technology to the Polish market. Since first seeing HDR images for the first time a couple of years ago, I felt that higher dynamic range and a wider color gamut would have a bigger impact on viewers than just seeing more pixels on their screens,” explained Ekstraklasa Live Park CTO, Szymon Wramba. Broadcast Solutions set out to build a state of the art HDR-equipped OB van for Ekstraklasa Live Park, which will be on display at IBC2018 (Outdoor, O.E02). Ten FS-HDRs installed throughout the truck will be used to handle HDR conversions and frame sync up to ten simultaneous channels of UltraHD HDR, and Ki Pro Ultra Plus will support signal recording and playback. 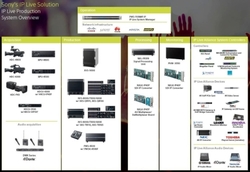 Sony is growing its IP Live Production System solutions with further support for SMPTE ST 2110 in both HD and 4K. This strengthens its commitment to driving interoperability based on open standards and supports wider industry adoption. “The industry transition to IP has been driven in no small part by wide collaboration,” explained Norbert Paquet, Head of Product Management, Sony Professional Solutions Europe. “Sony has been leading this journey and we continue to actively invest in shaping the IP landscape to offer customers the best systems, services and support they need to unlock IP’s full potential."