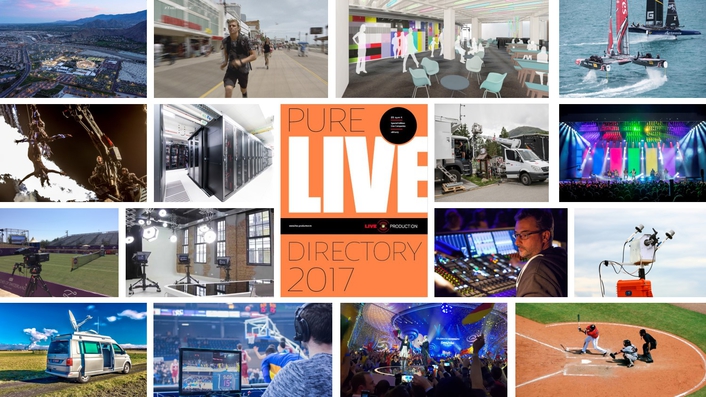 End of August PURE LIVE 2017 will be released featuring various events as diverse as the Americas Cup, Biathlon,  the Arcadia Spectacular, the MLB, Wings for Life, the Proximus League, the ESC, Bruno Mars, Luther, Ed Sheeran or the Tour de Suisse, the Confed Cup and the 24h at the Nürburgring. In addition we present detailed descriptions of 23 new HD/UHD OBVans and Trucks from all around the world: Australia, South Korea, Japan, Malaysia, Ghana, Estonia, Switzerland, Israel, Norway, Sweden, Italy, Germany, Slovakia, the UK, France, Brazil and the USA. 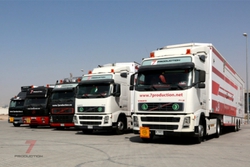 Get the Technical Specs of Unit 8 here

Get the Technical Specs of Unit 9 here 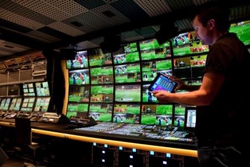 Grass Valley Races Ahead with EUROMEDIA

The rise in interest for 4K UHD coverage has prompted EUROMEDIA, a leading technical services provider, to make the move to 4K UHD in both its A21 and B40 OB trucks, by expanding the capabilities of its Kayenne K-Frame Video Production Center switcher from Grass Valley. Upgrading the 4 M/E Kayenne K-Frame switcher panels in the two trucks from their Compact K-Frames with 80 HD/3G inputs and 48 HD/3G outputs to Standard K-Frames with 180 HD/3G inputs and 84 HD/3G outputs to provide 40 4K UHD inputs and 20 4K UHD outputs in four- quadrant mode, will meet the needs of its 4K UHD productions while easily switching to HD/3G when needed.

Stage Tec is equipping Radio Télévision Suisse (RTS) HD1 OB Van with seven RMDQ DSP boards (Platinum DSP). These resources will be needed from the end of June at the 51st Montreux Jazz Festival. The concerts will be mixed in the Montreux Jazz Lab in 24-bit resolution at 96 kHz in Stereo and 5.1 Surround Sound simultaneously. Last year's trial run with Stage Tec's audio DSP unit was such a success that seven RMDQ audio processing boards are now permanently installed in HD1. RTS requires this high standard of audio mixing at Montreux because the Jazz Festival concerts are recorded for release on vinyl, DVD and Blu-ray.

Two of the world’s most prestigious broadcasters rely on StarTracker for their most high-profile live events. The BBC repeatedly selected StarTracker, in conjunction with Vizrt graphics, for use in election coverage such as the UK general elections. Global News, Canada’s largest news organization and worldwide leader in virtual set technology, used StarTracker for the first time on election coverage. “We use a lot of virtual reality,” said Gerry Belec, Director, Operations and Technology, Global News, Corus Entertainment, “but this was our first time using a Mo-Sys system. On this election night, our high-end cameras and jib were already being used, so we were left with some rather outdated equipment. It gave our older equipment new life. We learned that any camera or set can become virtual or augmented. 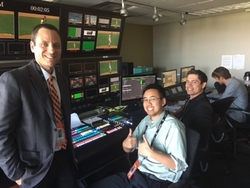 The Giants integrated DYVI into the control room’s workflow alongside its XT3 servers, which ingest feeds from eight broadcast and six of the team’s own in-house cameras. Replays are created using LSM environment and all available media assets – including replays, promo content, pre-packaged highlights and interactive elements – are centralized in DYVI and used to create a live video experience, which is instantly delivered to the in-stadium video boards. Due to its GPU-based architecture, the production team can create entirely bespoke content for every game, even if it’s for a specially-themed night at the ball park.

In Space No One Can Hear Your Scream

French sound engineer Stéphane Bucher faced a difficult task when he was asked to record the audio for Valerian and the City of a Thousand Planets, the new film from internationally acclaimed director Luc Besson. The Sci-Fi blockbuster, reportedly the most expensive movie ever produced in Europe, features over 100 characters, many of whom are wearing intricate costumes including space suits. Ensuring that dialogue was recorded intelligibly was Bucher’s first challenge – and one that could only be met by using DPA d:screet™ 4060 Omnidirectional Miniature Microphones.

New Zealand-based outside broadcast services provider OSB announced it had purchased a fleet of Xeebra multi-camera review systems at the 2017 NAB Show for use in all international rugby competition in the country. As part of this deal, Xeebra is being used by the television match official (TMO) and also for medical review purposes throughout the British and Irish Lions tour of New Zealand. For each match, a Xeebra server powers two Xeebra clients. The first is used by the TMO, who is located high up in the stand and the second is used for the Medical Review (MR) and is positioned pitchside so that the medical team can swiftly analyze footage from multiple angles using a combination of EVS’ BEPlay remote and the touchscreen. They can also automatically export the clips for further review after the match.

The solution developed by NETCOSPORTS allows a nearly instantaneous integration and provides maximum reactivity for the teams to enrich displayed contents. According to Matthieu SKRZYPNIAK, CTO Innovations at NETCOSPORTS, « viewers are more and more connected and eager about unpublished information. We are confident that this kind of innovation will take an increasing place in the sport shows broadcasting industry as it is a great way to enhance the content offered to viewers. For the first time, production teams can not only select the best angle of view but also associate the most relevant data to illustrate an action... and do this almost live. » 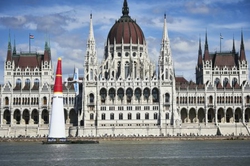 Budapest is the prestigious grail that every pilot wants to win, and Chambliss now has six podiums and two victories at the stop that first hosted a Red Bull Air Race in 2003. A weekend crowd of 110,000 lined the banks of the Danube to see the raceplanes dart under the city’s Chain Bridge, where Chambliss’s 1:00.632 was just 0.108 ahead of his fellow North American McLeod. Muroya’s third place was also his third consecutive race podium, after wins in San Diego and Chiba. As the midpoint of the season, Budapest marked a critical milestone, and Chambliss jumped up five spots to fourth in the World Championship standings with four races left to go. 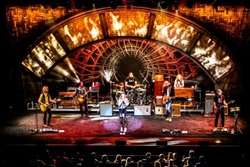 Robe Can Be Itself on Sheryl Crow Tour

Multiple Grammy Award winning singer songwriter Sheryl Crow is on the road with her new ‘Be Myself’ album, together with a brand-new lighting & scenic concept created by LD Jeremy Roth which includes Robe Spiider and BMFL Spot moving lights. Jeremy landed the gig after production manager Rick Purcell saw his designs for the current tour by Chicago alt-rockers Wilco … and made Sheryl aware of his work. They and her management team all wanted a more theatrical presentation that was based on soft scenic elements. This provided the starting point for the design, together with extensive discussions between Jeremy and the artist about how stage aesthetics related to the vibe and direction of her album. 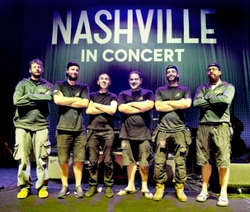 Bringing Nashville to the UK

Adlib was delighted to be chosen by the production team from the Grand Ole Opry in Nashville, Tennessee, to supply lighting, audio and crew to the recent UK arena tour by the stars of the CMT hit musical drama TV show, “Nashville”. This, the first arena size tour here for the phenomenon, featured an incredibly talented house band backing a selection of stars from the show like Charles Esten, Clare Bowen, Chris Carmack and Jonathan Jackson, who played a lively jukebox mix of favourite songs from the latest series, together with their own original material and some unexpected covers. 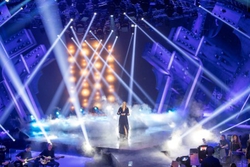 Teamwork is a great thing, and this was clearly evident for Slovenia’s 2017 PopRock Festival, a high profile national TV live event broadcast from Ljubljana, where lighting designer Crt Birsa and set designer Greta Godnic worked their creative magic in a special collaboration … with the help of 200 plus Robe lighting fixtures! The PopRock Festival, now in its second year, was staged at the Gospodarsko Razstavisce exhibition centre for the first time, bringing an interesting mix of pop and rock artists and bands who had battled it out to reach the final twelve. The aesthetic requirement was for a high-energy environment with enough latitude for all to look different and cool - both on camera and onstage - where they were appreciated by 700 excited music fans packed into the venue to catch the action as it unfolded. 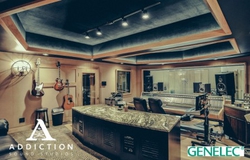 Genelec, the leader in active monitoring technology for nearly 40 years, is holding a listening showcase of the ultimate point-source monitoring, its new “The Ones” series of Compact Coaxial Active Monitors. The event is held at Addiction Sound Studios in the city’s Berry Hill neighborhood (506 East Iris Drive, Nashville TN 37204) in Nashville on today, July 11, from 2 p.m. to 6 p.m. The event is open to the public, and no RSVP is required.  “The Ones” series includes Genelec’s award-winning 8351 three-way Smart Active Monitor, along with the newly released 8341 and 8331, the world’s smallest three-way coaxial monitors. These three models, joined by Genelec’s 1238A Smart Active Monitor, will be set up to audition in a controlled listening environment. 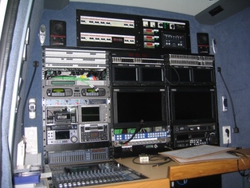 Based on the ATEME fifth Generation STREAM compression engine, the Kyrion encoder and decoder provides excellent baseband video quality at minimum bitrates. This solution has been designed for contribution over satellite and IP networks, with added value features such as ultra-fast-boot, ultra-low latency, built-in monitor, audio loudness control, ABR output and DVB-S/DGNG/S2/S2x support. All these features make ATEME’s Kyrion an ideal solution for football, basketball, volleyball, tennis and other live broadcast sporting events. “As a company with great experience in the live broadcast of various sporting events, we are very familiar with different DSNG solutions. We choose ATEME’s Kyrion solution over other competitors for its high video quality. "

Slomo.tv, a leading international supplier of cost-effective, high performance server-based video recording and replay systems, has provided  its newly introduced Dominator AT/3G production servers to the Kazakhstan state broadcaster. The servers provide essential content record, storage and replay facilities to the televising of the Astana-based international exhibition, EXPO 2017, which is currently underway. With 115 participant countries and over two million visitors predicted to attend, this event takes on great political as well as cultural significance in the central Asian region.

VR and AR examined from all angles at IBC2017

Virtual Reality (VR), Augmented Reality (AR) and Mixed Reality (MR) will come under real-world scrutiny at IBC2017, with opportunities throughout the show to learn more about these new technologies - from their current place in the market to the opportunities they offer, as well as examining technological challenges and user experiences. Rikard Steiber, President Viveport and SVP Virtual Reality at HTC Vive, will give a conference keynote presentation on 16 September looking at the road ahead for VR. The session will look at the emerging swathe of consumer devices and services, such as the Viveport VR app store, as well as showcasing successful VR experiences across platforms, from entertainment to sports content.