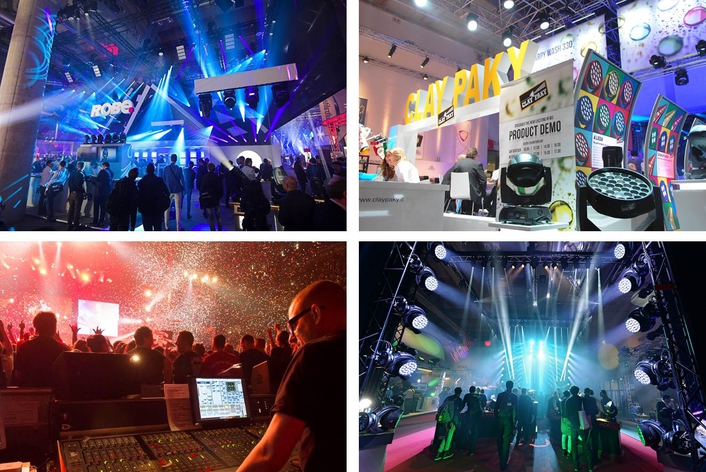 A new feature of this year’s Prolight + Sound is the way each day of the show takes a key thematic area, which is featured across both the Prolight + Sound exhibition and the Eventplaza Conference. On Tuesday the focus is on professional qualification and encouraging young people into the industry, while Wednesday concentrates on safety at events together with legal framework conditions, when the successfully established International Event Safety Conference (I-ESC) takes place. The speakers on Thursday and Friday deal with a broad spectrum of content concerning event technology and marketing. It includes everything from new technical standards in the audio and video area to the management of radio frequencies and new approaches to marketing and controlling.

We currently have Prolight + Sound previews of the following companies online:

The previews will be maintained on a daily basis and the link Prolight + Sound 2016 will always show the growing number of featured companies in alphabetical order. 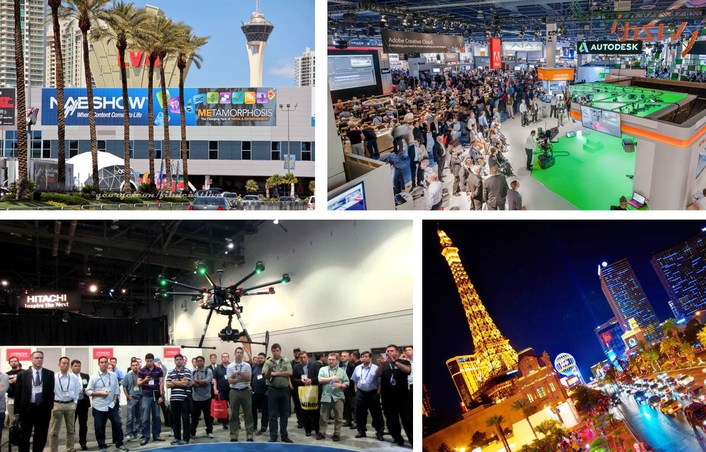 The media and entertainment industry has become unleashed. Dynamic innovation and cutting-edge technologies are shattering the boundaries of content and opening up limitless opportunities. NAB Show® is the only place to break free from conventional thinking and open your mind. Inspiring and innovative attractions served up in 2016 include the new Virtual and Augmented Reality Pavilion, showcasing this new medium and how it impacts all aspects of the industry, Connected Media|IP, focusing on the consumer experience; the Aerial Robotics and Drone Pavilion, featuring a fully enclosed “flying cage” for demonstrations; SPROCKIT, where market-ready startups present their new ideas; StudioXperience, a live studio using all the latest tools; and so much more. Experience that pivotal moment when a new technology, business model or partnership sparks awareness and you realize...

We currently have NABShow previews of the following companies online:

The previews will be maintained on a daily basis and the link NAB 2016 will always show the growing number of featured companies in alphabetical order. 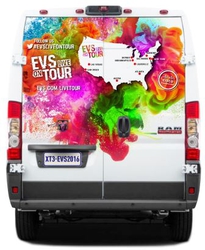 Following the NAB launch, the truck will head out to visit some of the biggest sporting events in North America. Stops will include the Kentucky Derby, the Indy 500, US Open golf as well as multiple NBA, MLB and NFL games. At each event, operators and customers will be invited to explore the truck’s demonstrations, get training, learn about new technologies and network. “Making our key stops at the major American sporting events is a great opportunity for us to connect with our customers and operators on their own turf,” said Quentin Grutman, senior vice president at EVS. “It’s the perfect chance to show them our latest technology as well as provide training and demos. Most importantly, we want to create a social place for them to meet fellow EVS users in a fun environment. This is a big undertaking for our EVS Live on Tour team but we can’t wait to hit the road.”

To upgrade an award-winning production facility that major networks use for live coverage, Keeneland Race Course in Lexington, Kentucky has purchased routing and other equipment from Grass Valley. Keeneland conducts two race meets annually, in April and October, and last year hosted the Breeders’ Cup World Championships, broadcast live on one of the major networks. The track is a National Historic Landmark, and much of the movie Seabiscuit was filmed there because of the track’s retro feel. But Keeneland also has a history of innovative live productions and has been recognized as the Thoroughbred Racing Association’s Simulcast Award recipient six of the last eight years.

Changing the rules of the world of virtual studios for broadcasting

Infinity Set’s hands tracking feature – which enables presenters to trigger animations and graphics with the simple movement of their hands – is part of the TrackFree Technology which is unique to Brainstorm and which offers tracking capabilities without any external hardware required. Top of the list of ‘must see’ features available thanks to TrackFree is the TeleTransporter, Brainstorm’s revolutionary ‘virtual traveler’ feature that already made a big splash during last year’s NAB show. The 3D Presenter is another unique TrackFree-based feature that generates a true 3D representation of the live presenter. This enables him or her to cast virtual shadows and reflections over other real and 3D objects within the virtual environment, greatly enhancing the realism of the program content.

Broadcasters, content owners, sports leagues, and federations — everyone is racing to up their game and generate revenues by creating and offering compelling new media experiences. In support of its community of C-Cast technology developers and designers  EVS launched the C-Cast APPlied Challenge C-Cast is a turnkey Software-as-a-Service platform that enables content owners to maximize the value of their media by connecting live content with production teams, brand owners and final viewers. Its cloud-hosted tools can scale to the global delivery needs of the world’s multinational sports events, or a small single-venue concert. This year’s winners will showcase their final projects at a dedicated area on the EVS booth (SL3816) at the 2016 NAB Show. 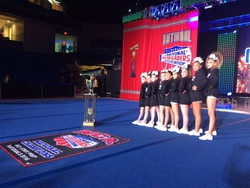 The best cheerleading squads in the country met recently in Dallas, Texas, for the National Cheerleading Association All-Star National Championship with well-practiced routines performed beneath a large dynamic rig that included lighting and video gear from Elation Professional. Held February 19–21 at the Kay Bailey Hutchison Convention Center, production company Gemini Light, Sound & Video of Dallas served as lighting and video vendor for the event, which was televised nationally on the CBS Sports Network. The visual centerpiece of the setup was a large upstage LED screen made up of 448 Elation EPT6IP™ LED video panels. 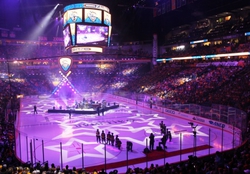 It was Nashville’s turn to host the 2016 Honda NHL All-Star Weekend, and the four-day event in Music City was packed with enough star power on and off the ice to excite thousands of hockey fans.  Morris, formerly known as Morris Light and Sound, was charged with conceptualizing and executing the audio and lighting installations and providing 24/7 production management at five venues during the weekend.  Morris deployed large complements of Clay Paky Mythos and Sharpy Wash 330 fixtures at three of the locations. Matt Geasey, Visuals Department Manager at Morris, and his team oversaw the lighting design, 3D rendering and equipment specifications for multiple activities. 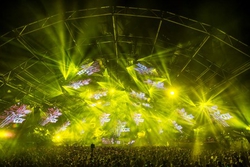 Robe Catches the Beat with 250 Fixtures at ULTRA Miami 2016

Ultra Miami 2016, a major U.S. EDM event staged along Bayfront Park in glamorous downtown Miami, attracted over 150,000 music fans and party people for three days of festive enjoyment with some of the best dance sounds on the planet. This year, Robe BMFL and Pointe moving lights were prominent on three major stages – the Main Stage, the Live Stage and the Carl Cox & Friends Arena – all helping create visually stunning environments. The production design for Carl Cox & Friends, and the Worldwide Stage was created by Steve Lieberman of SJ Lighting. Contracted directly by Ultra, Steve was also the lighting designer for the main stage, where he collaborated closely with creative director Richard Milstein and production manager Ray Steinman to develop a unique Ultra concept that also took into account the requirements and specs of all the headliners – a veritable Who’s Who of EDM A-listers! 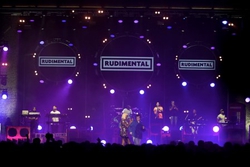 Colour Sound is the Generation for Rudimental

West London based lighting and visuals rental company Colour Sound Experiment continued its three year association with the UK’s darlings of drum ‘n bass Rudimental and lighting designer Jonny Gaskell, suppling lighting, associated rigging and crew for their most recent UK tour which included a sold out show at London’s O2 Arena. Colour Sound was brought in by Jonny when he became involved with the band as he really likes working with them. “Once again the service was fantastic as you expect! Everything was spot-on, and H (Colour Sound’s MD Haydn Cruickshank) ensured that the kit was absolutely optimised for the available budget as well as supplying an amazing crew!” 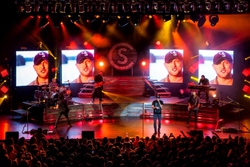 “On this tour, it really all starts with the music and the artist behind it,” began production manager James “Mo” Butts. “As a passionate songwriter, Cole is also a high-energy performer so we wanted to incorporate quality HD video into the tour design to heighten the experience for this headlining tour. When looking for a tour provider, I knew Elite Multimedia has an extensive inventory of lighting and video, plus they have a custom set cart operation too, so they could really provide everything we needed.” With a tour design that would rely heavily on the performance of the HD LED video, the production began reviewing the extensive stock of award-winning PixelFLEX LED video technologies at Elite Multimedia. With content, technical and logistical criteria in place, the team chose a video package that included 32 FLEXLite 6.9mm LED Panels and two PixelFLEX SU-401 master controllers. 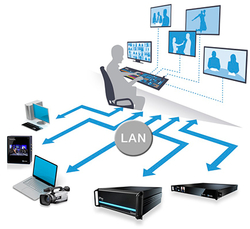 In addition to more than 200 developers working with NewTek on IP product integrations, NDI is also backwards compatible with a large number of devices from manufacturers and developers already using NewTek’s previous technology allowing IP connectivity between devices. This will extend support for NDI to well over 100,000 compatible systems already deployed worldwide, making it by far the most prolific IP video transfer method in the production market. This number is expected to grow substantially as more products become available from more than 200 companies that have signed on as NDI developers. NDI is an end-to-end solution with broad industry support. NewTek is also offering a suite of free NDI software tools designed to leverage the unique capabilities made possible by NDI and IP-based workflows.

At the 2016 NAB Show, Utah Scientific will introduce the latest in its IP initiatives: a new family of IP gateway input and output cards that provide two-way conversion of SDI video signals and SMPTE-2022 signals over a 10G Ethernet connection. The new gateway cards are designed to address broadcast customers' requirements as they continue to migrate away from baseband SDI signals and to all-IP-based operations. The new cards work with all UTAH-400 Series 2 enterprise routers and also plug directly into a stand-alone 2-RU utility chassis. As with all Utah Scientific products, the new offerings are covered by a 10-year warranty and no-fee customer support. Also Dejero has joined the recently formed Alliance for IP Media Solutions (AIMS). Also Utah Scientific has become a member with a mandate to bring IP solutions to the market that will offer complete interoperability, are based on open standards, and integrate seamlessly into media workflow environments while fostering industry innovation and efficiency.

The most important innovations compared to the former XIRIUM models first: XIRIUM PRO is constructed modularly. This means that depending on which signal shall be transmitted or received – analog, digital or DANTE – the sending or receiving base station can be equipped with the corresponding module. The repeater module offers further brilliant features: it generates a redundant audio signal, transmits it over a separate propagation path to the receiver, and thus prevents phase cancellation. In the XIRIUM PRO system every single transmitter can have an assigned repeater. Repeaters help to overcome structural barriers, offer extended diversity and increase the system range at the same time. 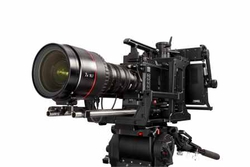 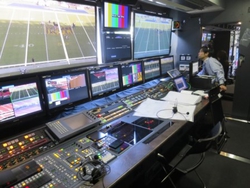 Nevion's Flashlink DWDM optical transmitter was used by Japanese state broadcaster NHK in its 8K transmission of Super Bowl 50. The event was filmed by NHK using six 8K cameras around the stadium, which was part of a larger 8K outside broadcast (OB) unit. While the footage was not broadcast live over the air — it was only viewable in the compound at the stadium and at NHK headquarters — it was shown on 8 February at a public viewing at the broadcaster’s offices in Japan. Nevion’s distributor in Japan, Networks Electronics Japan, won the project with NHK and supplied the Flashlink system as it met the broadcasters’ stringent requirements.