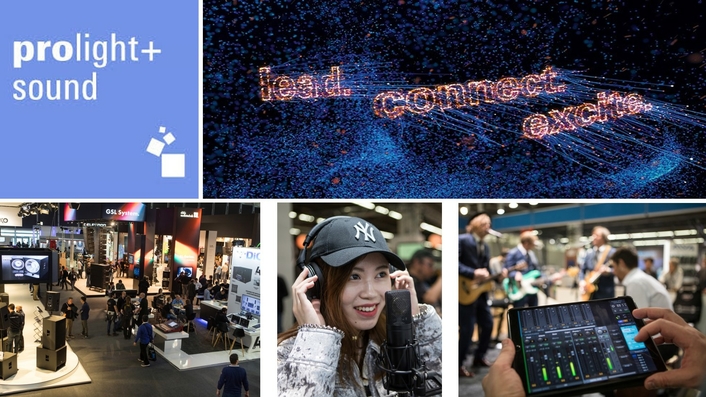 The link "NAB2019" will always show you the actual list of featured companies and events in alphabetical order.

Get the technical Specs here 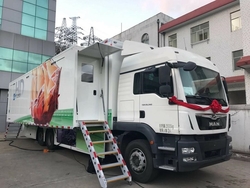 Get the technical specs here 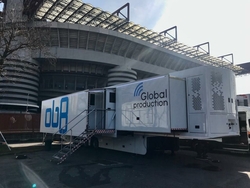 Global Production is an Italian company born from the extensive experience of an innovative team, who wanted to deliver industry leading quality to broadcasters and producers throughout Europe. For almost 20 years, Global Production has been an outsourced production partner supporting premier content producers of international sports events, live events, entertainment, TV and fiction programs, music and shows.

Get the technical specs here 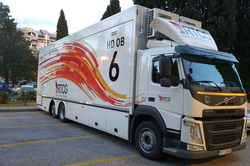 RTV Montenegro debuted its new Calrec-equipped HD OB 6 in February to broadcast Show Montevizija, a national singing competition to select its entrant to the popular Eurovision Song Contest 2019.Dejan Vujović, Chief Technology Officer, said, “This was a particularly important production for us because it was RTV’s first stereo television transmission and it was distributed in HD. The sound quality was superb, and that’s due in large part to the new Artemis Light console we have installed. The Artemis is incredibly easy to learn and operate.”

TVU Networks, the global technology and innovation leader in live IP video solutions, today announces that the Spanish public broadcaster RTVE deployed TVU Nano Router and TVU Anywhere to contribute SDI video over wireless networks from the remote and difficult conditions of the Dakar Rally in Latin America live to the RTVE studio in Barcelona.  The Dakar Rally is a renowned off-road rally endurance race that has been going on for more than 40 years. 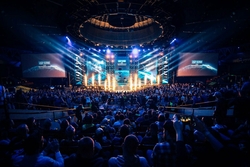 Robycam in action at the ESL One Katowice 2019 eSports event

With eSports being the current driving force in the entertainment and sports sector there is an ever-increasing demand for bigger spectacle and better viewer experience at eSports events, live on site, on TV or via streaming. From 22 February to 3 March the ESL One Dota 2 eSports tournament and Intel Extreme Masters stopped in Katowice, Poland. Around 18,000 visitors followed the battels live in the Spodek Arena and several million via Internet stream. The perfect stage for Robycam Germany’s cable camera system.

Betamobil again produces the Alpine Skiing World Cup events for ORF at all locations outside of Austria for for the 2018/2019 season. Two OB Vans: the HD6 and the HD7, were, are and will be on the road in 17 European race Locations including the World Cup Final in Soldeu / Andorra.To simplify the technical infrastructure, 2 BroaMan MUX22 systems, each with one Optocore X6R-TP, are used at each World Cup location. This allows the set up of xtremely flexible stage box systems for the transport of all the required signals to the presenter / interview position as well as to the commentator position. 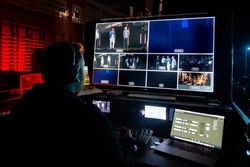 Since coming to the global stage with appearances on Britain’s Got Talent and opening for Penn and Teller in Las Vegas, Swedish magicians Brynolf and Ljung have been leaving audiences across the world dumbfounded with their stylish take on street magic. The duo’s latest live tour, ‘Cirkeln’ (Circle) takes them back to their homeland, with 44 dates across Sweden in a wide range of venues, from traditional theatres through to outdoor arenas. Live events specialist Cloud Production is responsible for translating the magicians’ deftness and sleight of hand for packed auditorium audiences each evening. 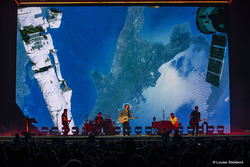 Adlib in the Wildness with Snow Patrol

Northern Irish rockers Snow Patrol were back on the road after a 7-year break, reaching out to fans with their new 2018 album “Wildness” and a sold-out UK arena tour, getting their enthusiasm and talent for delivering dynamic and exciting live shows right on point, reconnecting with long term fans and dazzling new ones with the energy and magic of their music. Adlib was delighted to be the audio provider, working with two highly talented engineers, Nigel Pepper mixing FOH and Jamie Hickey on monitors. Robin Scott was the legendary  and unflappable production manager at the helm, with Neil Mather the Mancunian tour manager, with whom Adlib has a long history and who has been described as “The most patient man in the world.” 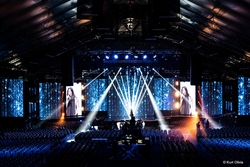 Claypaky hits the right notes for The X Factor Malta

International singing competition The X Factor made its debut in Malta and quickly broke a longstanding record to become the most viewed programme on Television Malta. Lighting for the series was entrusted to Nexos Lighting & Video who worked together with the rigging and technical team. Lighting designer Anton Borg Olivier joined the team to work on the live broadcast finals, helping to manage the increased TV lighting requirements and deliver that extra kick to the show. 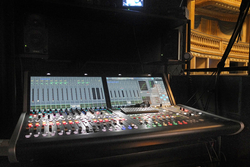 For the control room that serves its Grand Théâtre hall, Opéra National de Bordeaux (France) has selected a 24-fader Lawo mc²36 audio mixing console, which was installed in late August 2018. After extensive tests involving consoles from six manufacturers, the mc²36 was selected for its superior sound quality, competitive pricing and a compact footprint that fits snugly in the Grand Théâtre’s control room.

With Toboggan Services and the VAV Group, further Spanish companies are using the LaON wireless intercom system from Broadcast Solutions
The LaON systems from Broadcast Solutions will be used, among other productions, for the second edition of a successful programme by the Spanish public broadcaster RTVE from the NON STOP studios in Fuente el Saz and for the second edition of another successful dance programme which just started in February. After extensive market research and testing, Toboggan acquired the LaON LT750 systems including 16 beltpacks from Broadcast Solutions. With the LT750 systems and using two repeaters, Toboggan covers the communication with all team members. The teams rely on an uninterrupted full-duplex connection between the 16 beltpacks and the base stations. All LaON systems operate in the 5 GHz UNII band and guarantee excellent connectivity. 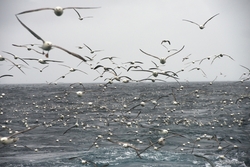 After completing a reportage photography project on the fishing trawler J. von Cölln, film maker and photographer Werner Lebert simply couldn’t wait to get back to the open sea. A year later, he was able to return to the J. von Cölln to make a documentary film on the lives of the trawlermen who take on the toughest conditions in pursuit of the catch. Also on board was a compact Sennheiser MKH 8060 shotgun microphone, which, just like the film crew, had to withstand the forces of nature.