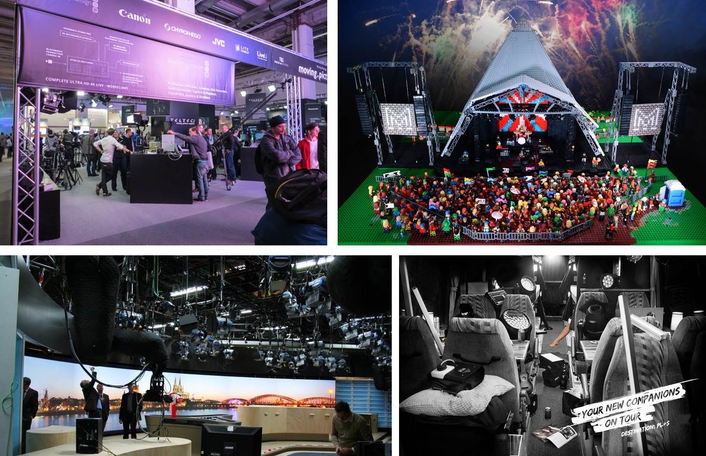 Obtain an overview of innovations in the fields of audio, video, lighting, stage and effects, and the integration of all

No other trade fair offers as comprehensive an overview of the products and services in the events sector as Prolight + Sound. For four days, this leading international trade fair becomes the meeting place for exhibitors, trade visitors, wholesalers, retailers and professional users from all over the world. The trade and professional visitors, who include event-venue operators, planners, retailers, wholesalers, sound experts, lighting designers, stage designers, studio technicians, events service providers and exhibition-stand builders come to Prolight + Sound to find out about the latest technical developments and products and the complete range of services.
The different products are divided into product groups as follows: audio technology, lighting technology, communications technology, theatre and stage technology, media technology, visual communication and systems integration.

Over the past two years, Mobile TV Group has begun to dramatically transform its truck fleet. The single-truck, dual-feed-production model that MTVG helped pioneer during the rise of regional sports networks throughout the 2000s has segued into the company’s vision of the future: a two-trailer, dual-feed mobile unit that provides enough space and technological firepower for both the home and visitor production teams. The 37VMU production room allows the visiting production team full access to all cameras and record trains from the A unit. The transformation continues with the launch of 37HDX and 37VMU, MTVG’s fifth two-trailer dual-feed system, which will be based in Detroit and work primarily for Fox Sports Detroit but can also be used as a powerful A/B-unit single-feed system.

Get the Specs of 37HDX here 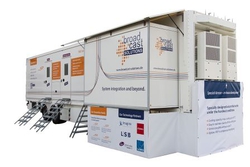 At CABSAT Broadcast Solutions will introduce its new Streamline family of OB Vans. The Streamline product family consists of pre-engineered OB Vans that come in five different versions: 4 to 16 cameras.All Streamline OBs are pre-engineered and nearly “off-the-shelf” OB Vans that can be delivered within a short period of time and with significant cost-savings – but without compromise on technology, quality and durability. For the first time the company shows a state-of-the-art 12 camera OB Van at CABSAT in full function. The S12 will be located at the outdoor area (Plaza 4). This OB Van proves the successful Streamline concept and will be delivered to an important broadcaster in the region. 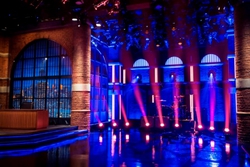 TV Lighting director, Kathleen Dobbins, has been involved with the popular NBC talk show Late Night with Seth Meyers since its launch in February 2014, working alongside lighting designer, Rick McGuinness and show producer Mike Shoemaker. And although the sets remain largely the same, in September she started to adopt GLP’s compact impression X4 S LED fixture for the subtle nuances that were required from show to show. She explains, “I was looking for a fixture with a very small footprint, but which was still sufficiently versatile to add to my rig for guest bands. I also wanted to use the flexibility of the fixture as eye candy on the deck during a musical segment or to light a wall in a comedy sketch.” 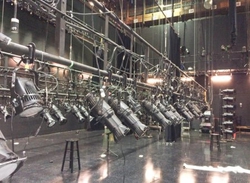 On Stage 16 at Paramount Studios in Hollywood, it feels like the last day of school. After six seasons on network TV, Glee is ending and the seniors of McKinley High School are cleaning out their lockers and moving on. They can look back on a show that redefined a TV genre and reminded a multigenerational audience of that great American art form: musical theater. The producers of Glee owed much to Happy Days, Fame, Grease and American Idol, but created a signature style that will live on in syndication and Netflix. The statistics are impressive. Glee produced 86 million iTunes sales, two platinum albums, seven gold albums and had more hits in Billboard’s top 100 than the Beatles and Elvis. At one time, Glee had eight out of the top 10 songs on iTunes. It also established the careers of its young cast members. 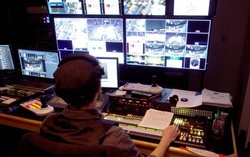 When video production company Myriad Productions was tasked with selecting key components for the upgrade of the Times Union Center’s video production system to HD, they faced a very tight timeframe and couldn’t afford any compromises in video switcher selection as a critical piece of the municipal indoor arena’s HD upgrade. Myriad Productions found the perfect fit in FOR-A’s HVS-390HS 2 M/E video switcher. Times Union Center is the home arena for the AHL’s Albany Devils ice hockey team, as well as for the Siena Saints, a NCAA Division I college basketball team. With a seating capacity of 17,500 people, the arena also hosts concerts, family events and other live sporting events. 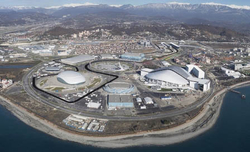 Over 15,000 meters of Riedel fiber optic cables were laid and there was plenty of excitement transmitted over them at the new Sochi Autodrom, one of the world's most modern circuits, which hosted Russia's inaugural Formula One (F1) Grand Prix race on Oct. 12, 2014. Riedel was heavily involved in creating the specifications for the television production requirements and provided the infrastructure for the transmission of video, audio, and intercom signals for the circuit. "The circuit in Sochi is currently one of the most modern in the world, equipped with state-of-the-art broadcast and racing technology," said Thomas Hellemann, vice president at _wige SOLUTIONS. For this prestigious project we partnered with Riedel for their specific know-how and more than two decades of experience in motorsports."

EVS previously worked with beIN SPORTS to implement an ingest and playout centre in its Doha headquarters as well as a fully integrated digital workflow for its French channels. Knowing the reliability of EVS equipment and the enrichment it brings to live content, beIN SPORTS wanted EVS technology built into every point of the new workflow from ingest and management to storage. Media Luso, part of the Mediapro group, was contracted by beIN Sports to provide the global service, including equipment and operations for the new system, while Media Burst – also part of the Mediapro Group – was responsible for the workflow design and implementation. 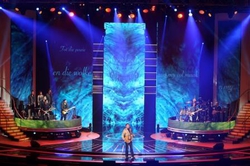 Clay Paky with the Artists of “Afrikaans is Groot”

With the calibre of such artists as Juanita Du Plessis, Theuns Jordaan, Steve Hofmeyr, Bobby van Jaarsveld, Bok van Blerk, Robbie Wessels, Lianie May, Karlien van Jaarsveld, Jay, Riana Nel, Jannie Moolman, Arno Jordaan, Jak de Priester, Corlea Botha, EDEN, Dewald Wasserfall and more, the show promised to be a hit. Featuring this amount of talent meant that the set and production for both the Moreleta Park Church Auditorium and the Grand Arena, GrandWest, had to be on point. Designed by Michael Gill and built by Gearhouse SDS, the set was the perfect balance of light and metal finishes. With concentric circles and strips of light built into the stage, the focus was drawn to each of the performances. 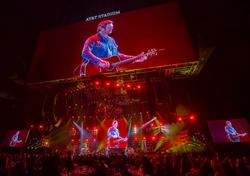 Usher and Blake Shelton – two of the world’s biggest music stars – united the genres of R&B and country respectively in front of 35,000 people for a unique double-headline concert at AT&T Stadium in Dallas. The concert was part of a gala event celebrating the 90th anniversary of the United Way of Metropolitan Dallas. When Usher was confirmed for the gig, Dallas-based lighting and show designer Eric Wade of FOHShow, who has worked with the artist for 15 years, was asked to develop a production design for this special collaboration, and specified 162 of Robe’s LEDBeam 100s and 50 x LEDWash 1200s as part of his lighting rig.

Iconic electro pioneers, KRAFTWERK, are currently touring the world with their most spectacular and innovative live show of their 45-year career – 3-D concerts of their “The Catalogue 12345678”. Having received rave reviews across North America last year, KRAFTWERK are now touring throughout Europe. DirectOut software developer, Claudio Becker-Foss, got to work and within a few weeks had designed the adaption for KRAFTWERK, which is now included as standard in all ANDIAMO 2 units. “After an internal discussion about Winfried Blanks request, we very quickly came to the conclusion that all ANDIAMO 2 converters with two MADI I/Os should benefit from the extended routing functionality,” said Becker-Foss. As a result, the complete ANDIAMO 2 line was upgraded so that now all DirectOut customers can benefit from the “KRAFTWERK” request.

For 21 years, CABSAT has evolved to be the number one event in the Middle East, Africa, and South Asia region for all industry professionals within the Broadcast, Satellite, Content Delivery and Digital Media sectors. CABSAT covers the creation, exchange, management, distribution and monetization of all filmed entertainment and radio content. The event connects live content opportunities and encourages collaborative partnerships which brings together the world’s leading content producers and connects them with every imaginable delivery platform.

Get their PRs here 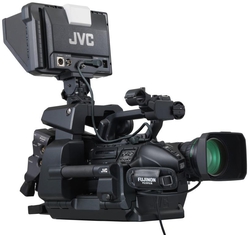 JVC Professional Video, a division of JVCKENWOOD USA Corporation, today announced KTVX, the ABC affiliate in Salt Lake City (DMA #34), is using six JVC GY-HM890 ProHD shoulder-mount camcorders in conjunction with the JVC BR-800 ProHD Broadcaster server powered by Zixi to produce live ENG reports from the field. The station has been using the cameras since June, but began airing live HD streaming shots in November. The JVC cameras complement the station’s four microwave trucks and two satellite trucks, allowing an enhanced ability to excel in local coverage. According to George Severson, news director, photogs in the field have been trained to use the GY-HM890’s built-in HD streaming capabilities first, a move that has “dramatically” reduced operating costs. 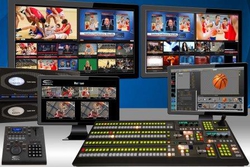 Broadcast Pix™ announced its “March Mayhem” promotion, which offers up to $6,000 in savings for sports bundles that include a Granite™ integrated production switcher and ReVue slow motion replay system. “Our March Mayhem promotion provides great value for broadcasters and colleges that want to upgrade their live sports productions,” said Steve Ellis, CEO of Broadcast Pix. “ReVue is an affordable way to add slo-mo from multiple cameras, and the Fluent Control production tools included in every switcher make it easier to produce great live television.” 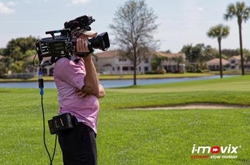 X10 UHD RF extends the operational flexibility of the X10 technology by supporting wireless shooting in HD productions where being close to the action is important. For very high-frame rate ultra-slow motion in HD sports coverage, X10 UHD RF operates in USM (Ultra Slow Motion) mode to deliver instant replays of up to 3,000 FPS in 720p or up to 2,000 FPS in 1080i. The system is available with a choice of wireless cameraback solutions, including Vislink’s Clip-On 4 or L1700. Control can be from the OB (mobile) truck using the OCP and JOG remotes, or when a data channel is unavailable the camera operator can control the system in standalone mode to send replays to the truck over a single wireless link. 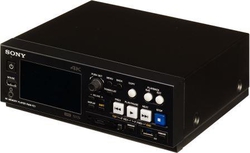 Sony announced a new 4K SxS memory player, the PMW-PZ1, a high quality and cost-effective playback solution for 4K shooting and post-production applications. The PMW-PZ1 features multi-format playback capability for 4K (24p to 60p) and HD video, supporting a variety of formats including XAVC Intra & Long, MPEG HD422 and MPEG HD, covering professional to consumer range of uses. The PMW-PZ1 is equipped with an SxS card slot, a HDMI output, 3G/HD-SDI outputs (x4), an audio output, LCD colour monitor and more. This combination of versatile interfaces enables the seamless playback, copying and monitoring of 4K and HD video across a diverse range of applications, not only for video production but also for the development of 4K equipment, 4K video walls at events, exhibitions, museums and more.

Acuity was recently deployed for 4K coverage at the ATP World Tour Finals and Acuity solved many of the challenges found in live 4K production. UHD (4K) production requires quadruple the technical resources needed for 1080P HD. Fortunately, we designed Acuity with this burgeoning new standard in mind. Producing UHD today requires 12Gb signal connectivity between sources and production switcher, which can only be achieved at present via a quad split over 4 3G SDI links. Each of these 4 signals are managed internally by combining 4 Mix/Effects banks. Fortunately Acuity has sufficient resources to easily provide up to 2 x UHD ME’s with 8 keyers each or use the MultiFeed functionality to create 4 x UHD ME's with 4 keyers each.