“Over the course of next year, when traditional broadcast deals come to an end, we will see some of the more niche sports go it alone and try the direct-to-consumer (DTC) approach. Launching a DTC platform is a fraction of the cost it once was and is increasingly getting easier to set up. However, despite this, many of these new platforms will struggle to attract wide audiences and will not be economically viable. Therefore, it’s likely we’ll end up seeing some of these platforms either being picked up by bigger sports organisations or consolidating to form groups.
Additionally, as broadcasters and brands cater to the growing generational divide in what people want from content, we will see the creation of short-form video increase. Nowadays, people, but especially younger generations, don’t have the time or attention span to watch longer form content. A driver of the growth of short-form video in 2020 will be the Olympics in Tokyo where the time difference could prove a problem for international audiences to watch events live. However, to cater to this, the Olympics has created its own platform for the provision of short-form video clips meaning European and US audiences will be able to watch snippets of the highlights. This will be much more convenient for viewers worldwide to keep up with the action and will allow social media sites to act as a distributor of this content.” Charlie Horrell, CEO, Imagen

“Next year, we’re likely to see growing rates of piracy as a result of the broadcast space becoming increasingly fragmented with the launch of new streaming platforms. Ultimately, the more fragmented the distribution chain, the more piracy we will see as it becomes too expensive and inconvenient for consumers to subscribe to multiple streaming services.
In 2020, ‘connected thinking’ will become more popular within media and sports enterprises as they begin to realise the value of a more holistic, joined up approach to technology, rather than having technology working in isolation. In these environments, where there are multiple inputs and outputs, implementing the right technology will provide a common ground in which all of the different streams can be brought together and siloes removed.
Towards the end of 2020 and beyond, fast and reliable 5G will make remote production and the distribution of signals much easier. This will be particularly noticeable for news outlets and broadcasters whose camera crews at the scene of an event will be able to use 5G to transmit signals in a more convenient and easier way. 5G will make the entire process smoother and will provide more bandwidth.”Tim Jobling, CTO, Imagen 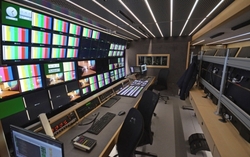 OBX VIDEE is a triple-expanding mobile production unit that can support up to 30 cameras. Based on client requirements, the van can be configured with dual control rooms or as one large, 75-square-meter production area that can accommodate up to 36 onboard team members. The OB van was engineered for the future by Videe and systems integrator Chromaline, with a design that meets each and every production demand with the best, most intuitive, and most efficient technical solution. As a top-end OB production system, OBX is ideal to provide host broadcasting services for major live sporting, music, cultural, and entertainment events worldwide. Integrating smoothly into the van’s IP infrastructure, the Artist and Bolero systems along with 36 RSP-2318 SmartPanels, on board OBX VIDEE play a critical role by enabling clear communications tailored to the requirements of each production. 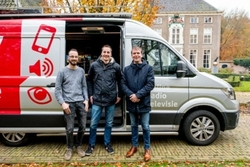 RTV Drenthe is a regional broadcaster for the province of Drenthe, in north-east Netherlands, which covers 2700km2 and has a population of around 492000. Based in the provincial capital Assen, RTV Drenthe has 82 full time employees and a pool of more than 60 freelancers. Its content mainly comprises local news, interviews, music and talk shows, broadcasting 24 hours of radio a day, a repeated 30 minutes of television, and webcasting. The broadcaster is a long-term user of Yamaha digital mixing consoles, with a number of 01V96s used for live events and a DM2000 in its large DAF outside broadcast truck. It recently added a new, medium-sized Volkswagen OB van - which has the advantage that it can be driven on a normal driving licence - featuring a Yamaha QL1 digital mixer. Designed and built by the broadcaster’s own technicians, the van is specifically tailored to their needs.

Cloudbass have been successfully using the systems on UHD, 3G and HD setups across a variety of live Outside Broadcasts, including both SKY Boxing and BT Speedway in UHD, on the British Touring Cars for ITV Sport, and The Lord Mayor’s Show for BBC Events. Michael Beaumont, Technical Director, Cloudbass Outside Broadcast says, “This forms part of our £5.5 million investment plan. When we saw the AEON-CC 4K we decided this would be the best system to meet Cloudbass’ customer needs. We’ve been using Videosys camera control systems for many years and have worked very closely with the company on bespoke projects including the provision of onboard systems for British Touring Cars.  Selecting Videosys to provide us with a 4K system was an obvious choice.” 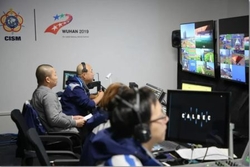 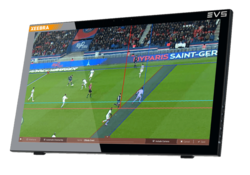 EVS took part in two independently run testing events in September 2019, hosted by LaLiga clubs Getafe CF and CD Leganés, that examined both the 2D positioning of the offside line and the 3D body positioning of the players. Over the two days, 40 different match situations were tested with two cameras for each situation to determine the accuracy of the offside line. This VOL certification provides validation that EVS’ offside line technology meets a certain set of standards and can deal with the complexities that come with precisely determining the offside line. And since this technology is fully integrated with EVS’ multi-camera review system Xeebra, it also means EVS can apply for future tenders from FIFA – as well as from other leagues and federations – that include the offside line with VAR.

For  IHSE,  a  leader  in  Display  Management  technology  and    KVM    (Keyboard    Video    Mouse)    extension    and    switching  solutions,  the  factors  determining  a  flawless  gamer   experience,   arena   operation   and   professional   AV    production    for    streaming    and    broadcasting    are    particularly relevant. Any human user interface extension, signal  switching,  video  format  conversion  and  video  wall  adaption  has  to  comply  with  the  needs  of  competitive,  professional   players,   the   audience   as   well   as   venue   operators.  In  the  case  of  a  live  event  when  teams  of  online  players  compete,  systems  must  enable  the  best  possible  workflow  for  the  production  crew  and  meet  the  expectations of the venue audience as well as the viewers of  live  or  on  demand  streamed  content  via  twitch.tv  or  youtube.com. 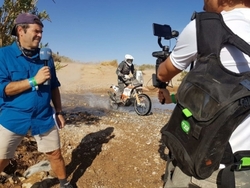 The Rally of Morocco has been ongoing since 1982 and is the most renowned rally in the country, bringing in the best racers every year. The dynamic event is made up of five off-road cross-country stages that are raced in different categories including, cars, trucks, bikes, quads and SSVs on different routes in the countries north. To provide its viewers with an engaging live broadcast that fully embodied the intensity of the races, RTVE sought a set of solutions whose versatility could match the liveliness of the rally. TVU One, the mobile live video transmitter with HEVC encoding, was also on standby for the event, deployed when RTVE needed to switch to a higher resolution transmission with ultra-low, sub-second latency. The combination of these TVU products helped RTVE effectively capture the fast-paced action of the 2019 Rally of Morocco, and the live broadcast was successfully aired to RTVE’s flagship website and TV channel. 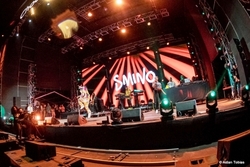 The main stage featured three central LED screens, making up one canvas, the middle being a 6 x 6 meter square and each outer screen 3.6 x 6 meter high. There were two 5.4 meter wide by 8.4 meter high IMAGs stage left and right. “With both side screens essentially being portrait, we had to be careful with how we framed our shots, making sure that everything was centered,” reveals live director Simon Wilkes. “We used the URSA Broadcast for acquisition; front of house we had a single camera with a very long lens and a supplementary Micro Studio Camera 4K locked off just next to the sound desk,” he explains. “In front of the stage we had a jib mounted URSA Broadcast, and another on a dolly. On stage was a roaming camera op and a handful of the micro cameras positioned in key positions for additional cutaways.”

Ozcan has been making music since the age of 14, when his instinctive skill with the flute and keyboard were the first signs of an emerging, prodigious talent. His first single, Chica Good, arrived in 2006 but it was 2011’s Reboot, swiftly followed by 2012’s The Box, that solidified his reputation. In the years since, he has produced not only a string of hit singles but also collaborations with peers including Paul Van Dyk and Tiesto, while continuing to push his own creative limits with the development of soft-synths and soundbanks. Ozcan describes his new studio as “everything I’ve dreamed of for the last 15 years – I can’t quite believe that it’s here. This room reflects my energy. It’s an extension of myself and my music. When you close the door, you’re in a different world, it’s amazing.”

After three sold-out performances at Amsterdam's Eye Filmmuseum, which saw Cosmos Within Us win a VR Days Halo award, the Future of StoryTelling will present the theatrical preview of Tupac Martir’s ground-breaking mixed reality performance piece in New York - as the Performative-R genre is born. A co-production between Satore Studio, a_BAHN, and Satore Tech, Cosmos Within Us turns the solitary experience of virtual reality into a multisensory performance piece for an audience of 100-150 people, creating an entirely new artform. It features 13 live performers, including five musicians, voiceover artists, live digital animations, two dancers, a conductor, and one ‘interactor’. 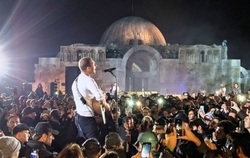 A few days before the history-making Amman performances, Coldplay’s management announced the addition of a one-off live show on November 25th at London’s Natural History Museum. Selected songs of this performance will be available on radio and social media, and the proceeds will be donated to an environmental charity. As always, what looked easy at show time was the result of intense preparations involving the best people in the industry. Tony Smith (Coldplay’s Audio Designer, FOH Tech and Crew Chief) liaised with Toby Alington, broadcast sound engineer extraordinaire, to find a solution for the Amman broadcast mix. Toby in turn approached Dirk Sykora to discuss a Lawo console solution for Jordan through SR Films. Toby mixed the two sets live in Amman with the help of Coldplay’s trusted Rik Simpson (Producer, Sound Engineer) and Dan Green (FOH engineer). 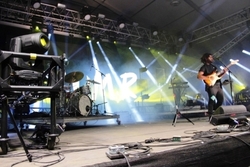 GENETIC has been working with R.LUM.R for about 4 months now and Bonnaroo was their first live performance with him. “We worked with R.LUM.R and his management team to integrate a new design that utilized custom-built infinity mirrors from R.LUM.R's previous shows,” said GENETIC President Andrew Sparks, adding that the week prior to Bonnaroo, they tech'd the show and held rehearsals so that everyone got a solid feel for the additions prior to show day. Most known for his breakout 2016 single, "Frustrated," the former classical guitarist is a multi-talented artist whose debut EP “Afterimage” showcases his passionate vocals and insightful lyrics. GENETIC Productions served as the design firm, crew provider, and gear provider for R.LUM.R's Bonnaroo performance, a setup that included Elation Artiste DaVinci™ and DARTZ 360™ moving heads along with IP65-rated Paladin™ hybrid lights and ACL Curtain™ battens. 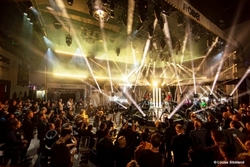 Robe Returns to the Future Again at LDI
Inspired by the ESPRITE‘s replaceable LED engine plus a host of other ground-breaking features and the iconic Back to The Future movie franchise … the all-action #ReturnToTheFuture part 2 highlighted Robe’s newest products in the context for which they were designed! The highly energized 7.5-minute performance played five times a day and had an original DeLorean MMC12 as the set centrepiece, six dancers and around 200 Robe lights - including ESPRITEs, Tetras, T1s, SilverScans, MegaPointes, Spiiders, Tarrantulas, SuperSpikies, LEDBeam150s and PixelPATTs. These were rigged in the roof and all around the sides of the double-decked booth. The spacey fun-filled show included fog and flame jet special effects and a water feature.