The U.S. National Aeronautics and Space Administration (NASA) debuted the first-ever live 4K video stream from space during the NAB Super Session “Reaching for the Stars: Connecting to the Future with NASA and Hollywood.” NASA astronaut and International Space Station (ISS) commander Dr. Peggy Whitson and NASA astronaut Jack Fischer conversed with Amazon Web Services Elemental CEO and Co-founder Sam Blackman live from the ISS and in 4K video. Following a conversation about the essential role video plays in facilitating the missions of NASA, the astronauts demonstrated experiments made possible in a zero-gravity environment. 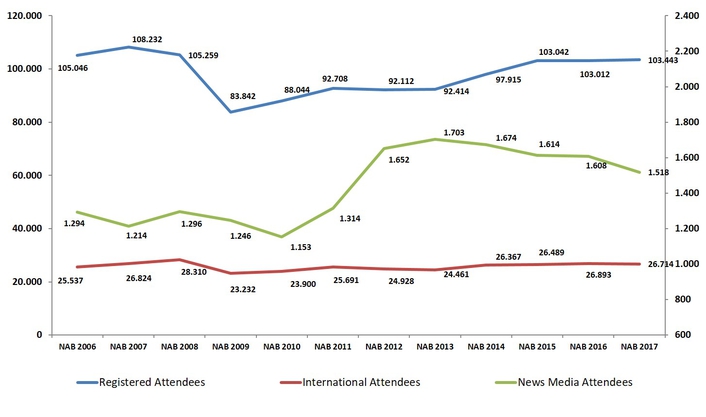 OSB’s Xeebra selection came after development of a long-term strategic plan and a thorough period of needs and technology assessment. OSB worked hand in hand with the New Zealand Rugby union to ensure all requirements were met. “The beautiful thing about Xeebra is the autonomy it allows,” said Andrew McNaughton, general manager of OSB. “The operator can run his or her own show and review what they need at their own speed, without tying up valuable production resources.”The sophisticated multicamera review systems will be used for games throughout New Zealand. OSB’s outside broadcast trucks, which are already equipped with EVS live production solutions, will each have one Xeebra system operating two clients.

The latest truck delivered to HDR is the tenth to be provided by Sony and was turned around in record time, with initial contract to delivery completed in less than 3 months. Sony offered the customer a one-stop shop for the strategic project, working together with external System Integrators to provide a full solution and ensure total confidence and peace of mind for HDR. Sony has previously developed hundreds of OB trucks for important turnkey projects, in addition to equipping on premise studios. These include developing the world’s first purpose-built 4K/IP OB truck for TV Globo, and providing a custom design Enhanced Live Production Control System for Netherlands broadcaster RTL. Flexibility, long standing expertise, and the ability to provide full 360 degree project management made Sony the ideal partner for HD Resource’s project.

Full-IP SMPTE 2110 Backbone, Infrastructure as a Service, Mobile First, Content Everywhere and UHD HDR: tpc switzerland ag (tpc) has chosen an open and ambitious innovative approach towards the new construction of their sports, news and technology centre in the Leutschenbach district of Zurich. A key objective is to incorporate pioneering trends and technologies into the emerging infrastructure. This will consequently streamline and simplify operational processes and workflows. “With the new construction, we are making the most of the opportunity to explore new horizons with regard to technology, creation, editorial work and operation,” explains Andreas Lattmann, CTO at tpc. 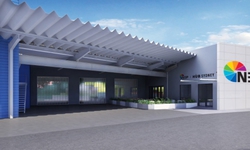 NEP’s Hubs enable multiple concurrent outside broadcasts (OBs) and will be the world’s largest networked broadcast centers. Based on an internet protocol (IP) core, the Hubs allow for remote, distributed production – meaning cameras and microphones will be located at the venue, with the majority of the production team based at the Hubs. Designed for large multi-camera sports broadcasts, they will accommodate Australia’s most-followed football codes – Rugby League (NRL) and Australian Rules (AFL) – as well as A-League football (soccer) and other popular sports from 29 venues across the country. An extensive rollout of Lawo’s new V_matrix platform will see all-IP routing, processing and multi-viewer functionality based around the software-defined virtual modules of the V_matrix ecosystem.

The BBC chose the Broadcast Data Center from Grass Valley, a Belden Brand, to fulfill its IP aspirations. GV Node, a key enabler of the Broadcast Data Center, provides vertically accurate switching along with other signal processing and routing capability using the Cisco IP Fabric for Media networking solution, based on Cisco Nexus® switches and SDN Controllers to enable the migration from SDI to IP. An active member of the Advanced Media Workflow Association (AMWA) and the Networked Media Open Specifications (NMOS) projects, the BBC saw the leadership that Grass Valley provides in those initiatives as well as its role as a founding member of the Alliance for IP Media Solutions (AIMS) and felt secure in Grass Valley’s vision for creating a true IP solution for live broadcast. 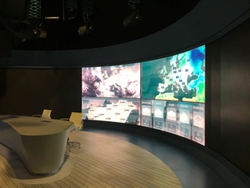 One of Hungary’s most popular television news shows, TV2’s Tenyek required a studio redesign as fresh and current as the news it airs, and invested in Absen. The news programme opted for a vast and curved, background surround display, measuring 12.8 metres by 2.4m, to display videos, pictures and graphics relating to the news stories. Comprised of 256 Absen A1.9 Ultra-High-Definition (UHD) LED display panels, the system was supplied and installed by Absen’s newly appointed VAP Partner in Hungary, Visual Creative, who will also provide the servicing schedule for the display. The Absen A1.9 modular display, with its pixel pitch of 1.9 mm and comfortable 160° viewing angle exudes 1000 nit brightness. Its vast and deep colour palette is enhanced by a black, anti-reflection SMD mask. 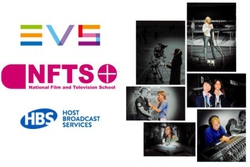 Bringing Another Vision to Sports Coverage

Women working in the sports broadcasting industry which is a traditionally male dominated domain, face a “glass ceiling” that prevents them from reaching senior positions. Although today, there are women in every crew, their roles are limited to junior, subaltern management or support functions, rather than crucial positions, such as Producers and Directors. The HBS Broadcast Academy’s very existence resets on three pillars: Sustainability, Legacy, and Gender Equality. The Academy aims to bring women the opportunity to develop their talent by offering them operational training and the chance to take on the challenges of top level roles in sports broadcasting.

PCCW Global’s expertise in live mega event management and new media technology delivery, together with Ideal Systems’ broadcast solutions and virtual reality expertise, enabled the team to deliver this complex solution in less than six weeks from project initiation. The collaboration involved Ideal Systems delivering the content acquisition using a number of pitch-side Nokia OZO 360° cameras*. These cameras provided a UHD IP signal which was delivered over HKT fiber to Nokia servers in the control room, to facilitate live stitching from each of the cameras’ eight 2K lenses to create multiple stitched 3D UHD streams. These 360° audio and video streams were switched and passed through to the Harmonic Electra VS encoders for delivery to the PCCW Global media delivery network.

In order to modernize its OB facilities, Antenna Hungária, the Hungarian terrestrial broadcasting, telecommunications and live production services provider, has purchased multiple solutions from EVS, the live video production technology leader. The solutions will be installed into the service provider’s OB facilities by Hungarian systems integrator and long-time partner of EVS, Rexfilm Broadcast and Communications Systems. This order includes 16 XT3 live production servers in ChannelMAX mode with Dual-LSM functionality, four IPDirector live PAM workstations and three XFile3 systems. All of these will be integrated into OB units ahead of the live production of the 17th FINA World Championships of aquatic sports, which will be held in Budapest and Balatonfüred this summer between 14-30 July. 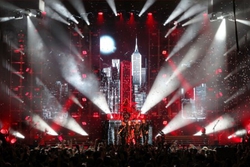 Robe Gets in a Panic

Multi award winning American rock band Panic at The Disco continue their ‘Death of a Bachelor’ tour in the US with a striking production design created by Matt Larivée of Montreal-based creative practice Lüz Studio, who worked closely with the band’s lighting designer, Alex Specht. Together they specified 50 x Robe BMFL Spots, 10 x CycFX8s and six PATT 2013s which are prominent on the rig. The idea was to create a very dynamic stage aesthetic which would highlight the classiness of adding a Sinatra-style horns section to the lineup combined with a mysterious new cult logo. The architecture of the rig with gold-painted ladders at the back, contrasted with five moving curved LED video ‘chandeliers’ which meant the environment could easily switch from classic to edgy and contemporary!

Having completed a hugely successful tour at the end of last year, Scottish rock band Biffy Clyro are on their way to the US. Both Front of House engineer Jonny Lucas and Dan Speed on monitors rely on the power of DiGiCo SD10s for their mixing requirements. They deploy three separate rigs around the world, with two duplicate systems which includes, in some instances, the more compact SD10-24. For the 2016 UK tour, all audio requirements were supplied by Skan PA Hire. Jonny has been working with Biffy Clyro for almost a decade. “I did my first show with them supporting The Who at Marlay Park in Dublin in June 2007,” he recalls. “There was no soundcheck and only a 20-minute changeover. It was a baptism of fire!”

At the end of last year, over 80,000 people descended on the MMRDA Ground in Mumbai for the first ever Global Citizen Festival India. This was the biggest music festival ever produced in the country and required the biggest L-Acoustics systems ever seen or heard in India. In fact, its sheer scale dictated that India’s most prestigious rental companies join forces to supply the required 200-plus loudspeakers. The Global Citizen Festival is organised by Global Poverty Project. Based in New York, it has been running since 2012, bringing together the biggest international stars to raise awareness of extreme poverty across the world, its goals being closely aligned with the United Nations’ Sustainable Development Goals.

Once again, NAB Show is the premier destination for content creators, producers and distributors exploring the evolving world of media, entertainment and technology. The exhibition featured 1,806 companies spanning 1,091,792 net square feet of exhibit space and the preliminary registered attendance is 103,443 for the 2017 NAB Show. The link below guides you to more than 130 product reviews in alphabetical order.

Get the Product Listing here 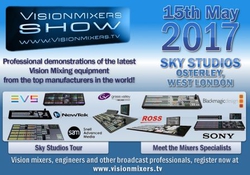 The concept is very simple, you have the people who operate and engineer Vision Mixing desks in Studios and Outside Broadcast facilities (many of whom are freelance) coming together to meet the mixer specialists with a view to gaining more knowledge about the desks. Since most Broadcast Professionals are freelance, training and information on the latest mixer software updates don't always filter down to the end-user. The show brings together ALL SEVEN of the main Vision Mixing Manufacturers: (Sony, S.A.M.{Snell}, Ross, Grass Valley, EVS/DYVI, along with Blackmagic Design and NewTek with their Tricaster) each showing their latest High Definition and 4K Vision Mixers. 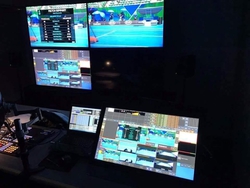 Designed for a single operator, the innovative solution brings together a video switcher, audio mixer, graphics, slow motion and replay/highlights with an intuitive full touchscreen control interface. Vibox is designed for a six-camera production with clean and dirty video outputs, and ideal for jobs where a full OB set up may be impractical or cost prohibitive. All input sources and output programming are recorded on the system in broadcast grade codecs, and intuitive, user-defined automation is integrated into the software operation. This means common effects and transitions can be triggered by the operator through presets. 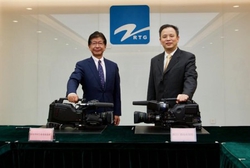 At the end of 2016, Sony Professional Solutions China (PSC), under Sony China ltd. and Zhejiang Radio & TV Group held a signing ceremony on the broadcaster’s 15th anniversary, to mark the strategic investment in 4K IP OB Van from Zhejiang Radio and TV Group and their large investment in Sony XDCAM HD camcorders for HD news production. This took place in the soon-to-be-completed Zhejiang International Film and Television Centre. "Sony has a large number of successful HD and 4K IP OB van deployments in China. This 4K IP OB van for Zhejiang Radio and TV group is much more advanced, it consists of 32 channels and is equipped with core 4K/HDR and IP production equipment and solutions,” said President Ide, Sony Professional Solutions China.