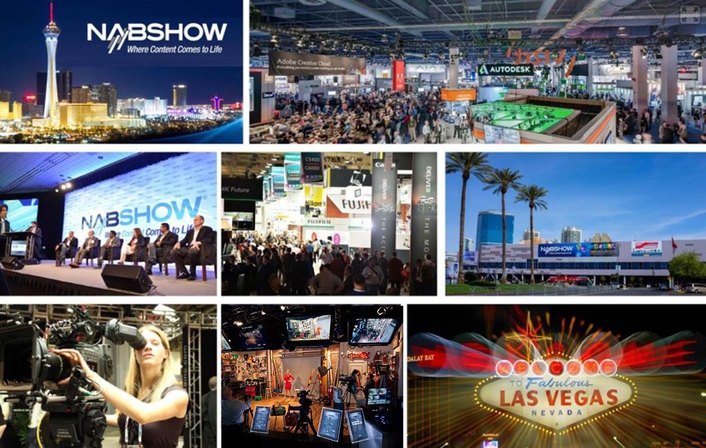 The world craves quality content. And for the pros who hunger to create and deliver it, the 2015 NAB Show® is the only source to satisfy your appetite. Overindulge in hands-on experiences with emerging technologies and the latest innovations, limitless networking and learning opportunities, and the inspiration to take your work to the next level.
Attendees representing every sector of the industry will be there. Broadcast, Digital Media, Film, Entertainment, Telecom, Post-Production, Education, Houses of Worship, Advertising, Military/Government, Retail, Security, Sports, IT and more converge in Las Vegas for six days to feed the need of next-generation content.
Popular and fresh attractions served up in 2015 will include Connected Media|IP, focusing on the consumer experience; the Drone Pavilion, featuring a fully enclosed “flying cage” for demonstrations; New Media Expo (NMX), hosting celebrity bloggers, podcasters and digital content creators; SPROCKIT, where market-ready startups present their new ideas; StudioXperience, a live studio using all the latest tools; and so much more. Taste the future of media and entertainment being cooked up for the 2015 NAB Show.

Get the Press Releases in alphabetical order 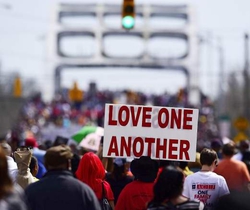 Mobile production specialist TNDV was onsite in Selma, Alabama to document a series of special events and concerts surrounding the Bloody Sunday 50th Anniversary, where President Barack Obama joined a crowd of thousands to commemorate the confrontation between police and peaceful protesters that spurred the 1965 Voting Rights Act. In addition to a lineup of influential speakers, the weekend included the Selma 50th Anniversary Concerts, which brought together local musicians and popular national artists for three concert events across Saturday and Sunday. TNDV provided audio, video and uplink facilities for the main “Salute Selma,” concert event on Sunday, featuring Rick Ross, Keith Sweat and other well-known musical acts. TNDV worked with cable networks BET and Centric to bring the concert to viewers worldwide via a live stream. A broadcast special will air this Sunday, March 15 on Centric.

Riedel at the G20 Summit in Australia

Demonstrating its leadership in providing secure, reliable, and versatile solutions for the most demanding events, Riedel Australia partnered with the Brisbane Convention and Exhibition Centre (BCEC) to provide a robust fiber and radio network for the 2014 G20 summit in Brisbane, Australia. The companies not only deployed Riedel's MediorNet real-time fiber infrastructure along with more than 200 Hytera DMR radios for the high-profile event, but also provided audio, video, and communications services throughout the two-day summit. "In planning for the G20 summit, we knew that redundancy was of the utmost importance, so Riedel's MediorNet immediately sprang to mind," said BCEC AV Project Manager Richard Saunders. 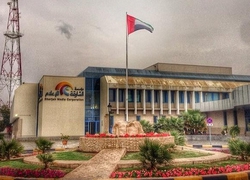 Sharjah TV purchased the Kayenne K-Frame Video Production Center switcher and three LDX WorldCam cameras with XCU base stations for the upgrade from SD to HD. The LDX WorldCam can switch between 1080p/1080i/720p/1080PsF and is the ideal solution for any production under any condition. The LDX WorldCam enables 1080p productions that are normally impossible to cover without huge investments in additional lighting or without serious degradation of the image quality. The Kayenne Video Production Center with K-Frame delivers one of the highest levels of performance and flexibility available for live productions.

WKBN’s existing Ross equipment made their decision to go further with Ross Virtual Solutions very easy. Previously running with a Ross Synergy switcher, OverDrive automation and three XPression graphic engines, WKBN invested in three more XPression systems and UX Virtual Control Software to create the virtual space for each camera, as well as three Furio VR-One robotic heads; one with a Furio Robo Dolly and 6 meters of track. “WKBN’s goal was to take a fresh look at studio design by integrating the best features of traditional physical sets along with the unique new storytelling features available through augmented reality and virtual sets,” says, Kathryn Mosher-Boule, Manager for On-Air Image and Design for Media General. “Our team worked closely with Studio A Designs and the Ross Virtual Solutions to create the most innovative and practical new set design possible today."

A travel into mythology: Kullervo staged a the Finnish National Opera with grandMA2

Kullervo, Op. 7, is a suite of symphonic movements by  Finnish composer Jean Sibelius. Although often referred to as a "choral symphony," the work avoids traditional symphonic structure, and its five movements constitute a set of related but independent tone poems. Based on the character of Kullervo in the epic poem Kalevala and using texts from that poem, the work premiered to critical acclaim on 28 April 1892. Now lighting, screen and set designer Miki Kunttu has given the work, currently being performed at the Finnish National Opera, Helsinki, a completely new look. Kunttu explained, why the grandMA2 was his favourite choice for the project. 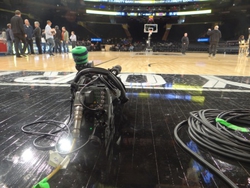 Firehouse Productions Shoots for the Stars at NBA All-Star Weekend

Madison Square Garden in New York City and the Barclays Center in Brooklyn recently hosted the NBA All-Star Weekend, a celebration of the most talented professional basketball players in the world. To match the talent on the court, Firehouse Productions supplied world-class sound reinforcement systems at both venues, relying on HARMAN’s JBL Professional VTX and VERTEC® line arrays and Crown I-Tech HD amplifiers. Madison Square Garden hosted the Sprint NBA All-Star Celebrity Game on February 13 and the NBA All-Star Game on February 15. Firehouse Productions provided an audio system featuring four arrays of 15 VTX V25 loudspeakers each, plus one array of 10 V25 loudspeakers, all hung from the ceiling and situated around the Garden’s main scoreboard. 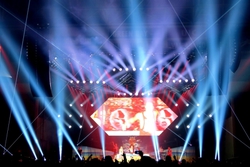 Florida Georgia Line has begun their “Anything Goes” 2015 world tour, in support of their latest album, with a large complement of Clay Paky lighting fixtures. Lighting designer and programmer Scott Cunningham selected the equipment from the inventory of Morris Light & Sound in Nashville.  He’s deploying 40 new Clay Paky Mythos fixtures, 24 A.leda B-EYE K20s, 14 Sharpys and 24 Sharpy Washes in the lighting rig. “I’ve been using Sharpys since I started to work with the band,” says Cunningham.  “They love a good bright, poppy show, and Sharpys really make themselves known in clubs and arenas.  And they’re a real workhorse.” Cunningham surrounds the stage with Sharpys, which act as floor lights to accent the sets; he also positions them on the thrust.  “They fill out the space from ground to ceiling,” he says. 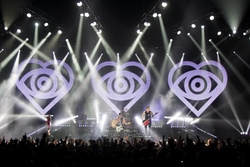 All Time Low’s Boston based Lighting Designer Jeff Maker lost no time in specifying Robe’s BMFLs on the rig, together with an all-Robe floor package comprising 24 x Pointes, 27 x LEDBeam 100s and 11 CycFX 8s. These joined the overhead rig – shared with You Me At Six - comprising 18 x BMFL Spots and 18 x Robe LEDWash 600s. Jeff worked closely with You Me At Six’s LD Louis Oliver from Okulus on creating the production design for the tour, with Leeds based Zig Zag Lighting appointed as the tour lighting contractor. As the second UK rental company to commit to buying Robe’s new signature moving light, Zig Zag actually purchased their BMFLs to go on the Gaslight Anthem UK tour at the end of last year, which was also lit by Jeff.

Optocore Takes The Grammys For The Fifth Straight Year

As was the case in previous years, ATK Audiotek again relied heavily on a predominantly fibre optic-based network run on Optocore, for the recent 57th edition. For the last five Grammy Awards ATK Audiotek has used Optocore to transport the award winning music that is performed live at the show, this year including AC/DC, Beyonće, Madonna, Katy Perry, Tony Bennett and Lady Gaga to name a few. The complex nature of the Grammys, in conjunction with the ‘mission critical’ delivery aspect of a live event, defines the need for flexibility and absolute fault tolerance and recovery that only Optocore’s unique 3-way redundant architecture provides.

No other trade fair offers as comprehensive an overview of the products and services in the events sector as Prolight + Sound. For four days, this leading international trade fair becomes the meeting place for exhibitors, trade visitors, wholesalers, retailers and professional users from all over the world. The trade and professional visitors, who include event-venue operators, planners, retailers, wholesalers, sound experts, lighting designers, stage designers, studio technicians, events service providers and exhibition-stand builders come to Prolight + Sound to find out about the latest technical developments and products and the complete range of services. The different products are divided into product groups as follows: audio technology, lighting technology, communications technology, theatre and stage technology, media technology, visual communication and systems integration. 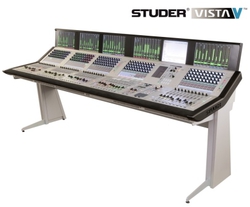 With the 5.2 software, saved Strip Setups can be assigned as CUE Events in the CUE List. Recalling CUEs that have these events assigned, will automatically load the specified Strip Setup onto the desk’s surface. This feature is a great help for users who are mixing in a “scene”-based workflow like in application such as theatres and pre-programmed shows. Loading the CUEs for the next scene will also bring the currently needed channels onto the surface. Up to four Soundcraft Realtime Racks, loaded with high quality Universal Audio (UAD) Plug-Ins, can now be connected to every Vista system. All plug-in parameters are saved and recalled by CUE events. The CUE events are also organized in a library and can be re-used for other CUE events. The individual CUE events can be enabled and disabled, and can be updated at any time.