NAB2019 Show is introducing the “Esports Experience,” a new exhibit floor destination located in the North Hall of the Las Vegas Convention Center. The interactive area features exhibits, a theater and educational programming that showcase the latest online gaming trends and content delivery technologies. The 2019 NAB Show will be held April 6-11, with exhibits April 8-11. Sessions will examine the overall landscape of the increasingly popular live gaming industry. Examples of topics include branding, media rights, in-game camera systems, streaming, monetization, consumer engagement and game development, among others. The Esports Experience will include a live gaming component, in which attendees can observe professional teams and also have the opportunity to play themselves.

Get the actual picture in four weeks at this years NAB Show: This vast and comprehensive show floor showcases the latest game-changing tech, craft-altering trends and cutting-edge tools that change how we create, manage, deliver, consume and monetize content, no matter the purpose, no matter the screen.

As of today we feature 18 companies and their approach at the NAB2019 Show. This list is continously  updated. NAB2019 opens on 06April at the Las Vegas Convention Center.

The link "NAB2019" will always show you the actual list of featured companies and events in alphabetical order.

Get the technical specs here... 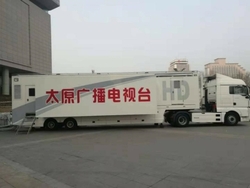 Get the technical specs here ...

(Shanghai Media Tech) High-Definition A1 Outside Broadcasting truck. This OB Van is a 12+2 channel HD broadcasting system which can be expanded to more than 20 channels, mainly working for live broadcasting and recording of international and domestic top-level sports games and grand variety shows. The system is up to Olympic A level OB van standard. It has complete ancillary facilities and technical ability of HD& SD multi-format broadcasting, able to record the 5.1 surround sound program independently.

Get the technical Specs here ... 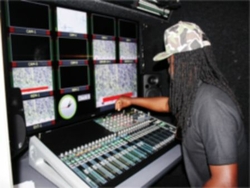 Urban Brew Studios, South Africa’s leading facilities provider and a landmark of creativity for entertaining content, chose STRYME’s flagship product – the ultra-slim 2U GENESIX VideoServer V9 – to speed up and simplify OB-Van productions. The Urban Brew OB-Van is HD-ready and willing to create technologically innovative, inspiring yet entertaining content.Whether Live, Sport or News events - when it comes to live HD productions it requires maximum flexibility in turns of on-location multicamera setups and OB-Van systems. Speed and simplicity, efficiency as well as superior usability and reliability are top priorities for all Outside Broadcasting workflows. 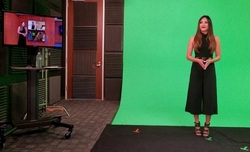 Green Screen Magic Made In Hollywood with Virtualsets.com and TriCaster

Bringing the magic of Hollywood to the small screen is a specialty of the award-winning, Emmy-nominated production and distribution house, Connection III Entertainment Corp. “We have a full-fledged digital studio on par with our competitors with billion-dollar parents,” says Cleveland O’Neal III, founder, President and CEO of Connection III. “The beauty of green screen today is, if done correctly, it can be truly indistinguishable from a practical set.” Essential to creating that illusion are state-of-the-art virtual sets from Virtualsets.com used in conjunction with the NewTek TriCaster® 8000 anchoring Connection III’s control room signal flow, tools that Josh Neufeld, producer, editor and director for Connection III, says, “unlock a whole lot of production value.” 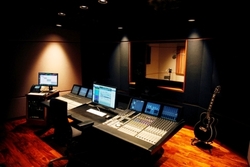 Located in the heart of San Francisco’s advertising district, One Union Recording started with a single studio in 1995, building on award-winning work to eventually grow into a five-studio facility. However, in July 2017, all that nearly came to an end, when a fire and related water damage threatened to end One Union Recording’s remarkable run. But the determination of owner John McGleenan and his staff – almost all of whom have been with him for the studio’s nearly 25-year existence – weren’t ready to let that happen; they rolled up their sleeves and with the help of longtime partners like Genelec and its vendor, Cutting Edge, One Union Recording would end up back on its feet.

The new facility at Park Royal in London comprises two brand new studio facilities, successfully converted from four industrial units. As well as two large multi-camera studios (144m2 and 125m2), there are two small news inject studios, three post production edit suites, MCR and transmission control rooms and a further three edit suites to be fitted out when required. The core video and audio systems content are produced using HD-SDI, AES and MADI. This decision was motivated by the wish to utilise existing HD equipment. However, the opportunity to achieve 4K video was also important, so the latest iteration of SDI was deployed, capable of handling 12Gbps data on a single coaxial cable. 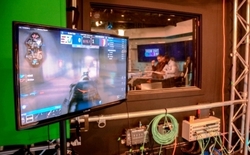 GINX Esports TV is a leading international Esports TV channel, offering linear channels to the UK, France, South Africa, USA, Canada and several international cable operators. Content is produced and recorded in GINX Esports TV’s studios in central London and distributed throughout the world in more than 10-languages. Already available in over 55-million homes across the globe, GINX Esports TV’s reach is steadily increasing every month. 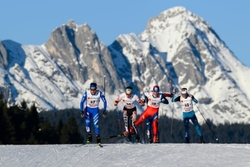 ORF on behalf of INFRONT has once again selected Euro Media Group as key technical supplier for the Nordic Ski World Championships in Seefeld. More than 130 HD cameras were deployed at the cross country tracks, the ski jumping disciplines in Innsbruck and Seefeld and the three TV compounds. Innsbruck’s 130 meter Ski Jump discipline has been produced by Videohouse’s OB2 and more than 27 HD cameras on the famous hill of Berg-Isl but the real challenge, apart from a 50+ Riedel Bolero wireless belt pack network, 24 fiber stage boxes and  about 50km cabling was the coverage with more than 70 HD cameras of the Cross country competitions with Videohouse’s OB1 as the center hub. 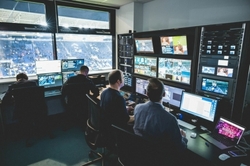 Blackmagic Design announced that German Bundesliga football club, TSG 1899 Hoffenheim, has overhauled its internal production and live broadcast capabilities with the implementation of an UltraHD 4K solution based around Blackmagic Design. A third place finish in last season’s Bundesliga secured the club an automatic, first-time qualification for the UEFA Champions League 2018-19. Prompted by this new journey, the production team at TSG wanted to overhaul its existing SD infrastructure, and improve its streaming platform, TSG.TV. 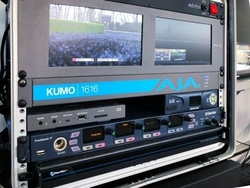 Emerging live streaming technology and platforms are opening up new avenues for collegiate sports to reach a wider audience, and in this respect, Princeton University is ahead of the game. The video production arm of its Athletics Department streams home games for more than 37 sports to students, alumni and international audiences via ESPN+, Stretch Internet and NBC Sports Philadelphia. Handling up to three separate destination feeds for more than 200 events a year, each with unique delivery requirements, is a heavy load to bear, but one that Princeton Assistant Director of Athletics for Multimedia and Broadcasting Cody Chrusciel and partner John Bullis manage seamlessly. 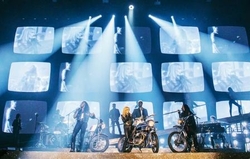 The fifteenth tour by Kylie, the ‘Golden Tour’ supported her fourteenth studio album with 33 dates in Europe and Australia. It launched last September in the UK and concludes in March 2019 in Australia. The retro look of the show featured a G-shaped stage and glittering golden runway with an enormous LED video screen upstage. “Kylie and Rob’s concept for the tour set the entire show in the 1970s as an abstract road movie which played out on stage and screen,” says Tom Colbourne, President with Blink. Blink created all the show’s screen content shooting live action footage in the California desert and a London studio following the narrative that linked the music, screen content and choreography. 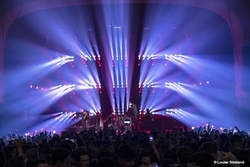 Robe Fit & Knows It on The Streets!

Co1ab unites the talents of Jon Trincas and Steve Hough, two respected young designers who pooled imaginative and creative resources to deliver the right look for the visceral raw wit, energy and stark reality of The Streets! They utilised 120 x Robe Spikies and 30 x Robe Spiider LED wash beams… all delivered as part of a lighting package by Blackburn based rental company, LCR. Steve was originally contacted by The Streets’ tour manager Keith O’Neill when they played some ‘come back’ gigs in 2018, which culminated in three incendiary gigs at Brixton Academy. The phenomenal interest in The Streets live resulted in this run, comprising a short UK tour with a lighting floor package, followed by five shows at Brixton, three in Manchester Apollo and three at the O2 Academy in Birmingham.

Northern-Irish power pop band Snow Patrol embarked on a UK tour to support new album, Wilderness, which concluded with a spectacular show at London’s SSE Wembley Arena in February. Lighting and Show Designer Davy Sherwin selected Claypaky Scenius Unico as the only moving lights of the production. Sherwin has worked with the band since 2002 and describes the creative relationship as ‘excellent’. “Sometimes the band gives me a starting point for a design, and I build on that. There are discussions and it is collaborative process, but mainly I have an awful lot of freedom in the design process,” he says. Rigged on both the front truss and two automated trusses above the stage, Sherwin used the Scenius Unico in conjunction with the video wall to shift the size and shape of the stage throughout the performance, as well as providing crucial key lighting.

The No.1 Man/Machine Interface for SloMo. Live Editing. Multicam Replay

Multicam (LSM) is software developed by the Belgian company EVS Broadcast Equipment. Combined with its remote controller, it allows controlling the xt series video servers and offers highly reactive live editing solutions like instant replays, slow-motion and ultra-slow-motion. This software and the related production servers allow broadcasters to record, control and play media. Originally developed for sports production, the XT series video servers arenow present in nearly each OB van in all big sportive events as FIFA World Cup, IFAF World Cup, MotoGP and Olympic Games, world championships and is actually used in the biggest studio broadcasts such as NBC, France 2, CCTV and many others. 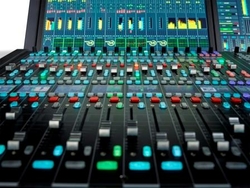 With this new option, mc²56 becomes the only audio mixing console in its category that can host up to 144 faders within the footprint of a much smaller console. The dual fader option also incorporates Lawo’s revolutionary LiveView™ thumbnail previews of associated video streams directly in the fader strips, enhancing user accuracy in fast-paced production situations. Known for its compact size, flexibility, and versatile design with capabilities drawn from Lawo’s flagship mc296, the 3rd generation mc²56 is optimized for today’s complex IP-video production environment. It features native support for SMPTE 2110, AES67 / RAVENNA, DANTE® and MADI audio streams. And because downtime isn’t an option, mc²56 has adopted the SMPTE 2022-7 standard for Seamless Protecting Switching (SPS), delivering dual-redundant IP-network links to its Nova73 routing engine.

Italian public broadcaster RAI will start broadcasting 8K content in 2020, starting with the Tokyo Olympics, making it the first broadcaster in Europe to use the technology. A preview of the broadcaster’s plans was made at a conference in Rome, during which several examples of productions in 4K and 8K were presented to the public. RAI already has its own 4K (Ultra HD) channel, which is available on special occasions via free-to-air satellite platform Tivùsat, in addition to the other three 4K channels (NASA 4K, Fashion TV 4K and 4K1). When it is on the air, Rai 4K usually broadcasts documentaries, TV series, football and other special events such as the Christmas Mass in the Vatican.