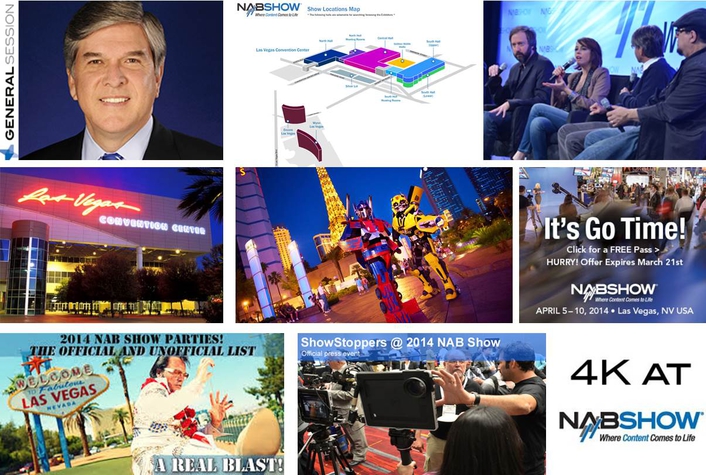 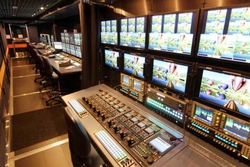 The history of Game Creek Video is in its people. Our 20-year ride began with 2 trucks, 6 employees, a hope, and a prayer. It has since successfully evolved into a thriving business, setting industry standards and comprising of a fleet of 35 trucks, a team of over 100 employees, and a presence at virtually every major televised sports and political event in America. In 2010, Game Creek was the first in the industry to build a facility with a complete 3G/1080p infrastructure. The A & B units in this facility have fiber connectivity for quick set-up and maximum flexibility. Dynasty, which was built for the YES Network, has been the mobile facility for every New York Yankee home game and four World Series since its launch in 2010. Since 2010, Game Creek has led the industry in the number of new facilities built with ten new production units along with three B units joining our fleet. All of these units have a 3G/1080p infrastructure. Additionally, two of our original high definition units have been re-built, with upgraded routing, monitoring, and audio capability. 2014’s build season will be packed with renovations to existing units, the build of at least four new units, and the addition of exciting new clients. Game Creek will keep its commitment to purposefully exploring new technology while meticulously maintaining our existing fleet. The latest addition to the fleet is Amazin'.

Get the specs of Amazin' here 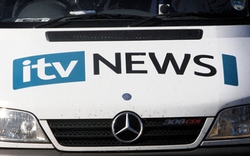 Sony has announced a deal with ITV as the commercial broadcaster moves its regional newsgathering operations to HD. ITV has invested in over 190 Sony PMW-400 and PMW-200 cameras for its teams as well as accompanying field production equipment. The new XDCAM cameras and tools will be used across all of ITV News’ regional newsgathering operations, allowing for workflow continuity and a seamless transition from acquisition through short-term storage and data transfer. 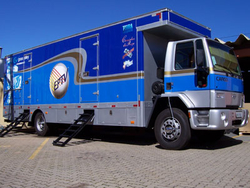 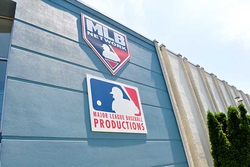 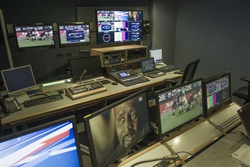 Gearhouse Broadcast’s Systems Integration division completed a project to install four production galleries and four voice-over booths. Since completing the initial installation, Gearhouse Broadcast has installed a further two galleries, taking the total number of production facilities to six. Each of the six production galleries are, based around an innovative workflow including an integrated Sirius 830 router and Kahuna 360 multi-format production switcher from Snell. Both provide full HD support, allowing Input Media to easily expand for future capabilities. The flexible workflow design allows Input Media to efficiently and cost-effectively make the best use of its resources. Each gallery can be configured to meet the specific requirements of a job.

BFMTV, who was looking for a state-of the art solution to trigger the video walls in its studio, chose Orad’s PowerWall powered by Orad’s HDVG4 video rendering platform because of its unprecedented performances while using sixteen HD inputs and multiple HD output from a single box. Antoine Robelin commented: “with such a powerful and yet scalable solution, BFMTV is committed to the best graphics on the large display wall in its main News studio”. Orad’s professional services team worked closely with BFMTV designers to create the extraordinary graphics that were used. 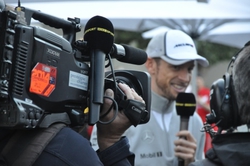 Raycom has supplied a ground-breaking wireless audio and IEM solution to Presteigne Broadcast Hire for use by the BBC during their coverage of the action. Manufactured by Wisycom, the system has been designed to give faultless, high performance during pit lane walkabouts, pieces to camera and paddock interviews. MRK960 2 channel receivers, MTH400 handheld microphones, MTB40 plug-ons and MTP40 belt pack transmitters provide unbeatable quality audio along with reliable in-ear monitoring via MTK952 dual transmitters and MPR30 true-diversity receivers. 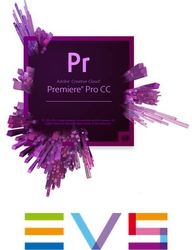 Editors working in Adobe® Premiere® Pro CC already benefit from direct access to the EVS IPDirector clip structure, allowing them to create highlights packages faster than any other workflow. The combination of EVS servers and Adobe Premiere Pro CC, using the IPLink interface, has been chosen by HBS, the dedicated host broadcaster of this summer’s major sporting event in Brazil. More than 35 Adobe Premiere Pro CC seats, linked directly to EVS shared storage, will be used to create final edits of updates, promos and multimedia packages. 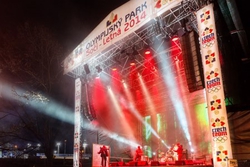 A section of Prague’s beautiful hilltop Letná Park area was transformed into an exciting and fun Olympic Park environment for the duration of the 2014 Sochi Winter Olympics, complete with a lighting installation in key areas by Prague based technical production company AV Media, which included over 100 Robe moving lights. The facilities available to the public in the Olympijský Park Soči-Letná 2014 included a main stage for entertainment, live commentaries and TV broadcasts, 6500 square metres of ice for skating, a cross country skiing course, a laser shooting range for the biathlon, two Ice hockey rinks – the national sport is something taken very seriously by all Czechs – a curling sheet, snow park, bobsleigh and other attractions, sports equipment sales and rental services and coaches / consultants. 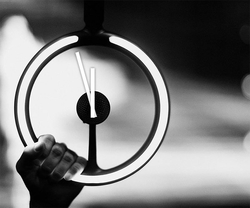 Interactive light technology group, Marshmallow Laser Feast (MLF), harnessed the sharp, high output features of 185 Clay Paky Sharpys to create a hard-hitting, high-impact real-time lightscape for U2’s latest music video, which launched the band’s new single ‘Invisible’ on 4th February. Previous to that a 60” cut down version was aired during the Superbowl, on 2nd February 2014. This cut down video formed the basis of a commercial for the Bank Of America and supports Bono’s charity, RED, an initiative launched to encourage business and consumer power to work together to eliminate AIDS in Africa. 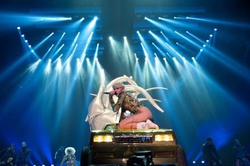 Lighting designer Rob Sinclair has incorporated 87 of SGM’s new X-5 LED strobes into the set for the current Miley Cyrus Bangerz tour, which visits Europe in a few months’ time — and he has been relishing the experience of working with them. “It’s the first time I have used these strobes and also my first time working with Miley — and it’s been great fun,” he reports. Introduced to the tour by top production designer, Es Devlin, the experienced LD has been joined by lighting director/programmer Sean Burke, making this the perfect team to deliver Devlin’s powerful and strident creative concept. 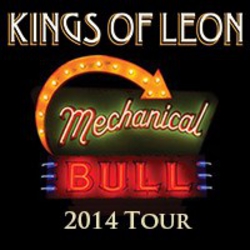 XL Video’s new Radiant MC-18 Hybrid LED screen is on the road for the first time in the US with the Kings of Leon on their “Mechanical Bull” tour, where it was specified by Production Designer, Paul Normandale. The high-impact 74 ft wide by 38 ft high Radiant MC-18 Hybrid screen is used at the back of the stage, showing stunning playback visuals created by the tour’s Creative Director Casey McGrath and the Kings of Leon team, combined with IMAG footage directed by Video Director, Phil Woodhead. Normandale specified the screen because the band - who have been judicious in their approach to integrating video into their live shows – this time around wanted a massive upstage LED screen! 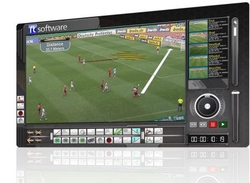 The World Cup is nearly upon us and if you are broadcasting the event you will no doubt be looking for innovative and cost effective ways to enhance your coverage.  RT Software’s 2014 World Cup Brazil loan package achieves just that. The package consists of the rental of a tOG-Sports Pro system, including broadcast specification hardware, fully licensed for use from taking up the offer until after the final match.  Also included as standard is access to RT Software’s extensive library of on-line training tools and tutorials, one day of free training at our London office, a generic interface to allow presenter control from tablets and remote support. 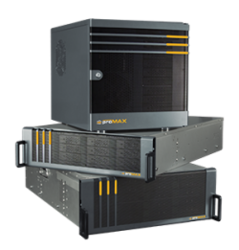 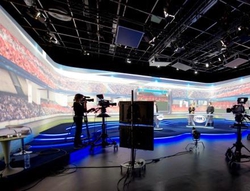 Situated at the MediArena in Amsterdam, the new Endemol Sport studios have been equipped with two 42-fader HARMAN Studer Vista 5 digital mixing consoles as part of an innovative production design, involving three studios and three galleries on the same fiber backbone. The consoles were supplied by Heynen, Studer’s Dutch distributors, and installed by system integrator DutchView. These form the audio control of a sophisticated fit-out initiated by Eredivisie Media & Marketing to mark the start of the 2013-2014 Dutch football season. Three new HD studios and production galleries, dedicated to match-day programming and highlights, have been built and equipped for this purpose.

Parks Associates has revealed new research predicting 4K TVs will follow a similar, but faster, growth pattern as HDTVs, which have reached 82% of U.S. broadband households after 15 years on the market. The research “4K Today: Bringing Ultra HD to Market” predicts 4K TVs will reach mass-market pricing in the next 2-3 years and top 80% of households in approximately 10-12 years. Parks Associates analysts note 4K will initially be delivered via OTT, with companies like Netflix, Comcast, and Amazon already working on 4K-based offerings, and as 4K traffic increases over the next two years, traffic demands on broadband networks will grow dramatically. As a result, operators are aggressively looking into bandwidth-saving technologies, including next-generation video compression technologies. 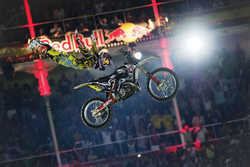