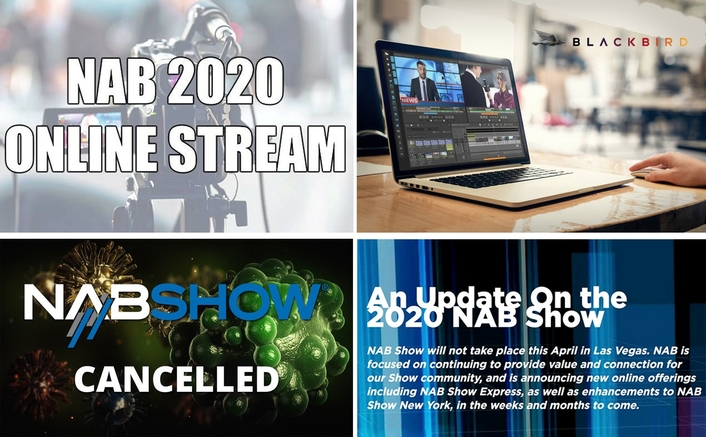 Blackbird plc (AIM: BIRD), developer and seller of the market-leading cloud video editing platform, Blackbird, today launched its Virtual pre-NAB 2020 focused on enabling live or file-based remote video editing for enterprises. Enterprises responding to the global threat of Coronavirus that need to enable remote or home editing for all or part of their content creation teams are invited to book an online demonstration of Blackbird on either 25 or 26 March 2020. There will also be a selection of group masterclasses available.

Concluding that it's impossible for NAB 2020 to be rescheduled later this year, the National Association of Broadcasters announced Friday it is pushing ahead with a new online event called NAB Show Express to be held next month.  That decision arrives a little over a week after the organization announced that NAB 2020, originally set for April 18-22 in Las Vegas, would be postponed due to the ongoing spread of COVID-19 and that NAB would instead review alternatives.

Antenna Hungária service is provided with HD and 4K ready production trucks of 100% Hungarian design and manufacture. New vehicles are added to our fleet in accordance with market requirements.  Due to decades of experience in outside broadcasting, comfortable and ergonomic workstations inside our production trucks have been designed by our engineers taking the highest technical requirements into consideration.Our equipment is continuously improved and state-of-the-art television equipment and technologies are employed in order to deliver high-quality outside broadcasts ordered by clients. 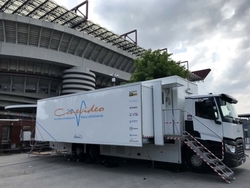 A dynamic company, able to respond to the demands of quality, reliability and economic optimization that every day the television market demands, and that offers its technical and creative know-how at the service of television production. R.I.N.A. ISO 9001 certifi ed for the high quality standard guaranteed throughout the chain of production, Cinevideo is formed by a young and specialized management, coordinated by the founder, ready to meet the customer requests for all stages of production and to propose the use of new and exclusive technologies.Dolphin7 can accommodate in a space of around 60sqm two separate production on the same truck, with 2 different audio rooms and two different production rooms. 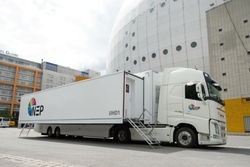 “We designed our new van to be a showcase for the latest in 4K and UHD broadcasting technologies, and Riedel’s MediorNet is no exception. The highly scalable MediorNet signal transport and routing system gives us new dimensions of flexibility, redundancy, and reliability, paving the way for the van to support any type of 4K production,” said Matts Berggr, Sales Manager NEP Sweden. “We also appreciate the simplicity of the solution. With capabilities like the MediorNet MultiViewer App and other built-in signal processing, we’re able to eliminate many external devices.”

Virtual Production allows you to access a dedicated Cloud based Switcher, with up to 6 streaming inputs and 2 Cloud based Clip players to stream a professional Live Program up to 3 RTMP destinations, so that’s:

• Feeds from 6 cameras or smartphones from anywhere in the world, as long as they have an internet connection.
• No specialist hardware is required, the operator just needs a laptop and can be anywhere in the world.
• A profession level switcher, audio mixer, encoder, ability to add graphics, captions, VT, Tweet insertion to increase audience engagement.
• Stream to YouTube, Facebook live, and your own IP/website etc. 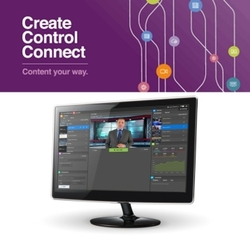 The social media streaming & distribution software tool that simplifies live video workflows. With GV Alyve, Grass Valley’s latest digital media stream selection and distribution tool, everything is browser based-without any additional hardware or software required.GV Alyve supercharges how you do streaming and distribution. Ingest from camera, live events, news, broadcast, sports, presentations, esports and more to bring your content to where your viewers want to watch – social media. Augment existing broadcasts and engage your audience with a browser-based production streaming and multicast platform. 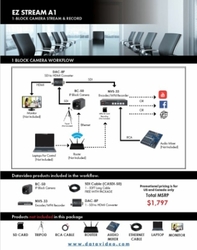 As more people are being asked to avoid large gatherings during the COVID-19 outbreak, live streaming has become essential to enforce social distancing from our peers at workplace, church, and schools. The response to help flatten the curve at this time has created a high demand in live streaming and Datavideo has a solution. We offer EZ Streaming Packages that are complete solutions which include at least a camera and an encoder for streaming to Facebook, Youtube or other desired platform. These packages designed for House of Worship, corporate events or educational applications.

With Telekom already commissioning Peter Brandt and his team of Remote Recording Network to mix and record the James Blunt concert, the current changes meant only minor adjustments to the production. The company has been handling the sound for the Telekom Street Gigs since 2007. To ensure the recording of the concert in excellent studio quality, Peter Brandt relied on Remote Mixing and his Remote Mix Room in Cologne, 400 km away from Hamburg. For on-site conversion of the audio signals and transport between Elbphilharmonie to Cologne, equipment from audio specialist DirectOut came into play. 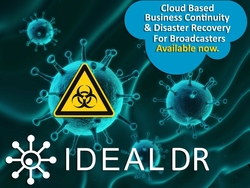 n response to the COVID-19 Pandemic and our customers requests, Ideal Systems today announces a new cloud-based broadcast platform for Disaster Recovery and Business Continuity.  The platform offers three quickly deployable services.The first service is cloud-based automation and playout for live linear broadcast TV channels. The system which can be remotely deployed and operated allows operators to run their TV channels with all of their branding, graphics, subtitles, languages and SCTE triggers in SD, HD or 4K and deliver these channels to DVB-S, T, IPTV or to other platforms. In keeping with the cloud nature of the system, Ideal MediaWorks which is the cloud division of Ideal Systems is offering personalized Zoom video conference for customers to both present and demonstrate the system in operation. 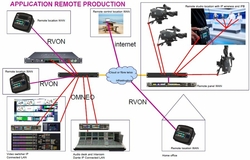 Remote Production in Times of Corona

The RTSIntercoms RVON is a solution for establishing communications over long distance and across different subnets. One of four user-selectable voice encoders– codecs – is used to compress digital audio to a low bitrate suitable for transmission over internet. The high compression audio codec is intended for long-distance satellite transmissions, whereas the low compression codec is commonly used when higher bandwidth is available. With RVON, a matrix can communicate with another RVON-enabled matrix or keypanel anywhere in the world.

Held at Stockholm’s Metronome Studios, live coverage of the three day event was handled by esports specialists Black Molly Entertainment. “We cover a huge variety of tournaments and competitions, online and offline, but when you have all of the players together under one roof, it gives you the opportunity to create a more elaborate show, with pre and post content, as well as the gameplay itself,” begins David Thåst, EIC at Black Molly Entertainment. “So we can have a lot of fun bringing additional elements into play, whether that’s showclocks or lighting and theatrical touches. That all said, those additions can also make these productions more demanding.” 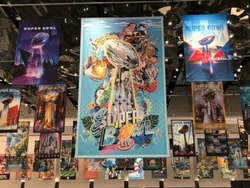 For Super Bowl LIV, FOX’s mission was to take all the action of the game and excitement of the show to air with the most visually stunning results. To begin with, FOX Sports announced that the entire event would be broadcast in High Dynamic Range (HDR), a first in Super Bowl history. The game, the halftime show and the pre and post-game studio programming would all be natively produced in 1080p 60fps HDR. While this decision to switch to the next-generation format meant that viewers would benefit from a higher picture quality all throughout the show, it also meant the production would require up to two times more bandwidth than the 1080i SDR productions of previous seasons. Moreover, this new production setup needed to be able to handle the unprecedented number of live feeds. With over 100 cameras deployed on site, FOX Sports had every angle covered, enhancing their storytelling capabilities, but also increasing the overall complexity of the operation. 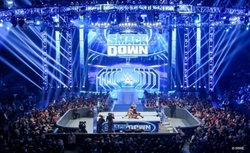 Fourteen robust Hippotizer Media Servers braved the WWE road: made up of Karst, Karst+ and Boreal+ machines. In total, more than 20,000 individual clips were processed during each performance, with pre-made content mixed with effects generated within Hippotizer V4.5. The global entertainment company WWE – known for its audience-grabbing, in-ring energetic theatrical drama – wowed crowds across the US, Middle East and Europe with big name appearances and new staging augmented with mammoth LED screens and visuals. 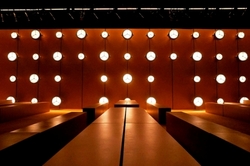 First created in 1943, New York Fashion Week (NYFW) is a semi-annual gathering of renowned and emerging fashion designers seeking to unveil their latest collections to buyers and media members from around the world. As a featured participant in the highly anticipated event, the Australian clothing brand ZIMMERMANN, led by designer Nicky Zimmermann, enlisted the assistance of fashion event agency Shades of Grey to create a guest experience that would leave a lasting impression. Held at SIR Stage37, the event production team wanted to implement a unique visual statement, so they worked with the multi-discipline design firm ENLUMEN who created a lighting design using Robe Lighting PATT 2013 and picklePATT luminaires supplied by 4Wall. 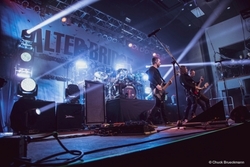 American rock band Alter Bridge wrapped up a 4-week tour of U.S. cities in late February with lighting designer Joshua Light directing a Bandit Lites-supplied lighting system that included Elation’s mini yet multi-functional Smarty Hybrid™ moving head. Light adopted key aspects of a design created by the late Joe Eager for the band’s 2019 European tour, a large 5-truck show that included profile and beam fixtures. For the US tour’s trimmed setup however (the band has always been more popular in Europe), Light needed a more compact package and combining fixture types in a single hybrid fixture was the way to go. 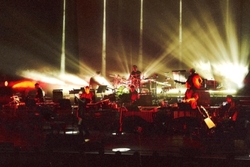 After six weeks of preparation, the band played London’s Barbican Centre, a venue chosen for its “brutality” according to the band’s drummer and Creative Director, George Barnett. In partnership with twin brother Jack, the electronic experimentalists have already enjoyed a decade of working with Satore Studio Founder, Martir. Martir says: “George came to us with some ideas of what he wanted the show to look like. TNP are known for making incredibly beautiful videos and he wanted to bring that aesthetic to this live show. “Video was very important in this instance. All of TNP previous shows have been primarily based around light, so we wanted to add an element of video yet not rely on it as a constant throughout the performance and allow the visuals to differ in style. The combination of pre-recorded material, visuals created in Unreal and TouchDesigner, and an intrinsic lightshow gave us the final looks desired.

Shanghai Media Tech and Panoramic Sound in 8K and 3D

This new production centre will see the largest high-speed network using the SMPTE ST2110 and AMWA NMOS protocols deployed by Sony, and, in Europe, it will be the first all-4K IP HDR based infrastructure managed by the IP Live Manager System from Sony. As part of the deal with Teratek, TMG has made a substantial investment in a range of Sony solutions and services, including: 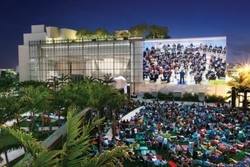