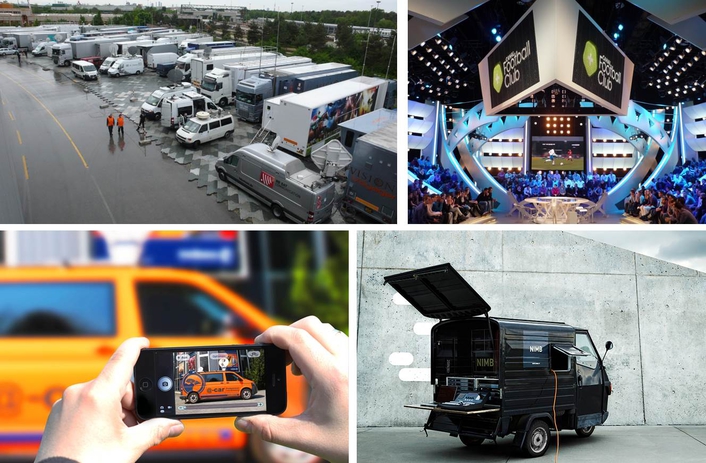 The well known LIVE-PRODUCTION HD OBVans Special and the HD Studio Special will finally get what they deserve: In 2014 they will be assembled in the one and only LIVE-PRODUCTION Special. Based on our well accepted 3-page format we will show and explain what live productions worldwide need to serve a multi-screen world: new HD/4K OBVans (Mobile Production) and new HD/4K Studios (Studio Production).

We will have a closer look at the service offerings of the big players like NEP, EMG, Mediatec, tpc or Mediapro. With their large fleets of OBVans , support and specialty trucks , flypacks and studio facilities they execute, deliver and display entertainment, sports and event productions for any multi-media platform around the world. The allocation of aerial filming, slow /ultra motion production, technical management and engineering support, playout, postproduction, set design and construction has established them the biggest full service providers for any kind of live-production.

On the contrary to these mega broadcasting companies smaller solutions become more and more popular. Nimb TV has realized one of them. This Danish production start up has built the smallest Ultra HD OBVan around a number of Blackmagic Design Ultra HD products including the ATEM 4K Production Switcher and the Smart Videohub video matrix. This three wheeler van can be positioned easily at the heart of a live production. So does nobeo's @-car. Equipped with NewTek's Tricaster 8000 this small HD OBVan can be used for any live streaming into the internet. This years Live-Production Special is the ideal platform for advertising your live production gear to the decission makers of the worldwide operating TV Live Production Community. Please contact Evelyn at evelyn.ode@live-production.tv she gladly will make you an individual insertion proposal. 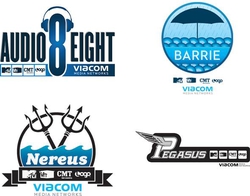 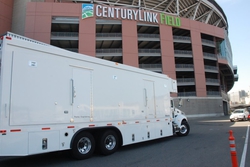 Proshow Broadcast is a highly capable and innovative team of people who proudly deliver industry-leading quality to broadcasters and producers in Western Canada and the Pacific Northwest. Proshow provides mobile production facilities, often known as OB vans, in Western Canada and throughout the Pacific Northwest;  Proshow routinely moves HD mobile production trucks to events in Oregon, Washington, British Columbia and Alberta.  Whether you’re looking for a highly capable and portable HD flypack or a full-featured TV mobile, Proshow has a solution to meet your needs.

MIRA provides high-end remote video production services for live events and taped programs from sports, corporate, and entertainment venues throughout the U.S. and Canada.  MIRA Mobile is the largest western U.S. based mobile facilities provider and has been in business since 1982.  MIRA maintains offices and/or field shops in Portland, Oregon, the San Francisco Bay Area, and Vancouver, BC.  Our current fleet numbers nine high definition mobile units.  The majority of our  trucks have been launched within the last three years. MIRA Mobile Television is a partner in Alliance Productions. 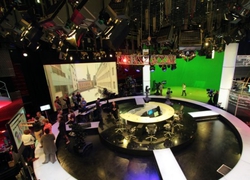 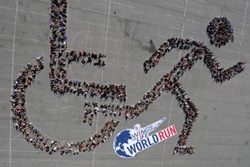 Riedel Communications provided the global communications backbone for the Wings for Life World Run, sponsored by Red Bull and supporting research to cure spinal cord injuries. An extensive installation of Riedel's Artist digital matrix intercom system and MediorNet real-time media network supported race-day communications worldwide, as well as production of a television broadcast and a live streaming broadcast with updates from all 34 participating countries. RecordLab TV & Media GmbH was responsible for providing the broadcast infrastructure for the event. On May 4 at 10 a.m. Coordinated Universal Time, more than 35,000 runners began the race simultaneously in 34 countries on six continents. Half an hour later, two "catcher cars" at each site began pursuit at 16 kmph (approximately 10 mph), using sensors to mark the time each athlete was caught and passed. The last woman and man to be "caught" earned the title of Wings for Life World Run Champion. The global winner was Lemawork Ketema of Ethiopia, who covered 78.58 kilometers (48.83 miles). 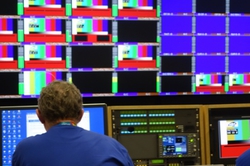 The sense of anticipation for the 2014 FIFA World Cup Brazil™ stepped up a gear at the International Broadcast Centre (IBC) as the screens of the Master Control Room (MCR) began to light up. ‘Feel It, It Is Here!’, the slogan of broadcast colleagues South African Broadcasting Corporation (SABC) during their coverage of the 2010 FIFA World Cup South Africa™, was brought to mind as the MCR went from the blank screens of the installation phase to action images of various match feeds from the FIFA Confederations Cup Brazil 2013. The sight of the MCR becoming fully operational is a strong visual reminder to all users of the IBC of the imminent arrival of the event.

The 2014 FIFA World Cup Brazil Local Organising Committee (LOC) will carry out the Stadia Experience Tour. Media representatives will have the chance to see what fans and journalists will experience during the FIFA World Cup. the tour will take place between May 30 to June 6 as shown in the calendar below. 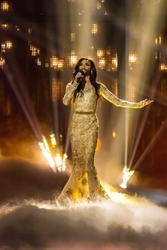 Several hundred pieces of GLP impression X4 LED moving lights were specified by LD Kasper Lange on behalf of the Danish Broadcasting Corporation for use at the 59th edition of the Eurovision Song Contest (ESC2014) in Copenhagen. The venue for this year’s show was the spectacular B and W Hallerne at the Refshaleøen — a former ship’s wharf that has been transformed into a Eurovision Park.

Robe To Light up Sky Flower at VIVID Sydney

Robe is supporting UK based Light Artist and Creative Director of Dark Art London, Simon Brockwell at the 2014 Vivid Festival of Music, Light & Ideas in Sydney, Australia, in the realisation of his bold and innovative light sculpture, ‘Sky Flower’. Robe is working in close collaboration with its Australian distributor The ULA Group and leading Australian Robe rental partner Elite Sound & Lighting from Canberra to supply and coordinate the equipment for Simon’s interactive installation which can be experienced live between the 23rd May and 9th June. Sky Flower is one of two installations at a new site for the festival in Martin Place, right at the core of Sydney´s buzzing CBD, adjacent to the Cenotaph and also near to Channel 7’s downtown TV studio, so it will attract a huge amount of attention. 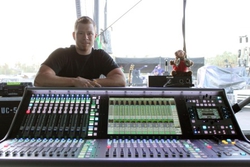 The engineering team for Jason Aldean’s Burn It Down tour is bringing the artist’s popular brand of country rock to the next sonic level with an SSL Live console for both FOH and monitoring.  A triple platinum artist who has released such albums as My Kinda Party, Relentless and Wide Open, Aldean has been wowing fans for years, packing in tens of thousands of enthusiastic attendees at each of his shows. For his latest U.S. tour, Aldean’s team is benefiting from the flexibility of Live and its trademark SSL sound quality. Chris Stephens, Aldean’s front of house engineer, has been working with the artist for the past five years and was previously with Michael McDonald and Wynonna. When he first sat down with the Live console, Stephens knew that he found his console of choice. 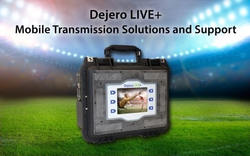 Dejero to Support Broadcasters in Brazil

Continuing its ongoing support of broadcasters covering global sporting events, Dejero announced that it will provide mobile transmission services for broadcasters covering the world's largest football event in Brazil. Beginning in early June, broadcasters will be able to rent the award-winning Dejero LIVE+ 20/20 Transmitter and install the Dejero LIVE+ Mobile App on their iOS and Android smartphones and tablets, enabling them to transmit live coverage and also to store and forward video for later broadcast. 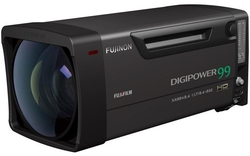 The Optical Devices Division of FUJIFILM North America Corporation has announced that two technical support centers have been set up to provide customer service and support to the company’s broadcast lens customers during the World Cup in Brazil running from June 12 through July 13th. One service center will be located in Rio de Janeiro and the other in Sao Paulo. During the entire World Cup, Fujifilm’s Optical Devices Division will have a engineers available at each technical center to support FUJINON lens customers.  Hours of operation during the matches will be from 9:00 a.m. through 18:00 p.m.

NewTek™ announced major enhancements for its professional line of TriCaster™ multi-camera video production systems. The new features––which further eliminate the need for racks of specialised equipment and multiple operators to produce video content that offers the same professional quality and look of a network-style television broadcast––are now available at no cost to current TriCaster 8000, 860, 460 and 410 model owners.

Blackmagic Design’s EMEA office has just put the finishing touches on a brand new Ultra HD demonstration vehicle, developed to show the versatility and breadth of Blackmagic Design solutions. Set to tour more than 50 cities, across 30 countries the Mercedes Sprinter, which was built by systems integrator and coach-builder P.A.D. is a mobile demonstration facility that recreates some of the real world workflows that broadcast, live event and post-production customers use everyday. “Whilst the vehicle could easily operate as an OB van the design is orientated around a customer's access to, and understanding of, the solutions Blackmagic Design offer,” reveals Simon Westland, Sales Director for Blackmagic Design EMEA.