Live Events in 3D at Digital Cinemas – A Viable Business? 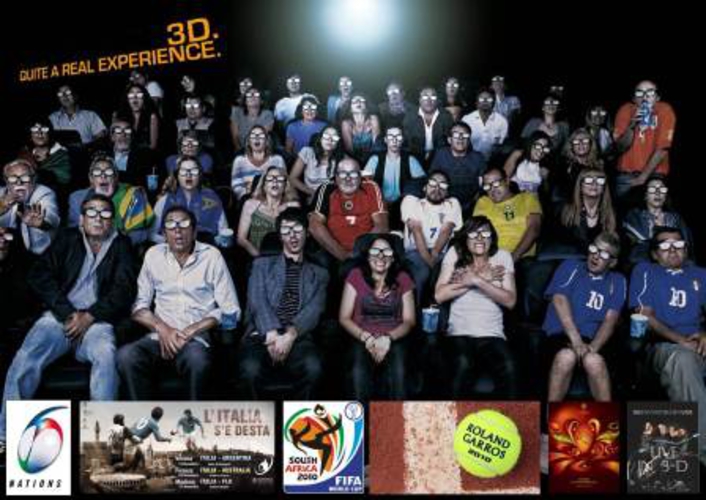 The Offerings of Live Events at Digital Cinemas are Growing

The Six Nations Rugby match on February 6 from Twickenham stadium was seen on 40 3Dequipped cinemas across the UK and was the first ever live 3D broadcast of rugby worldwide. And in November the three matches Italy vs. Argentina, Australia and Fiji were shown in selected “The Space” 3D cinemas across Italy. On May 22 Spanish soccer fans that missed one of the 75,000 tickets for the UEFA Champions League final could see the match Bayern Munich – Inter Milan in two 3D cinemas in Madrid. The Roland Garros tennis men’s final Robin Soderling – Rafael Nadal on June 5 was shown in 150 3D cinemas in France and Spain and over the 30 days of the FIFA World Cup in South Africa 25 matches were screened live in 3D across the globe in 475 cinemas in 33 counties. In addition we saw operas from New York and London, Ballet from St. Petersburg and Rock & Pop from Germany, France and Portugal in 3 D cinemas.

The growing population of 3D ready digital cinemas is supporting this trend, because in addition to the premium prices 3D cinemas can achieve with high class films they can add revenue with 3D screenings of live sports and music events. In May Apollo cinemas in the UK opened the first fully digital 3D multiplex, in June Christie digital projectors were installed in more than 12,000 digital cinemas worldwide. In September VUE Entertainment announced to entirely equip its 657 screens across Europe with Sony 4K digital technology. In November Odeon UCI, one of Europe’s leading cinema exhibitors and the world’s largest outside of the Americas has choose Arqiva’s digital cinema satellite system which will see another 100 3D live ready cinemas in Italy, Portugal, Austria and Germany by the end of 2010.

Rugby in More than 40 3D-Equipped Cinemas Around the UK

In February the broadcast of the rugby Six Nations match England vs. wales from Twickenham Stadium was seen in more than 40, 3D-equipped cinemas around the UK. This match was the first ever live 3D broadcast of rugby worldwide. The fans watching in the cinemas were in for a treat as they will actually felt like they had the best seats in the house.

In November Outside Broadcast NV announced a partnership with the Italian production company Frame for the coverage & live transmissions of the international test matches of the Italian Rugby Team. During 3 weekends in November all matches were produced in 3D and shown in selected 3D cinemas of “The Strand” group. 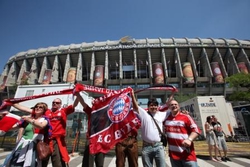 In addition to the coverage in HD (by MediaPro) the showpiece was produced in 3D by the Belgium production facility Outside Broadcast and the signal was distributed via Sky UK to the 3D pubs in the UK and Ireland and to two 3D cinemas in Spain.

The switch from SD to HD didn't change the way live sports productions were carried out that much, but 3D really is different – it currently is the ultimate science project. The language of 2D television has evolved over the course of 50 years, based on the fact that the average viewer was watching on a 20” TV screen – now we are watching in a cinema on a 72qm screen.

“We’re working within a 2.5 per cent depth budget for shots pulled behind the screen plane and about 0.5 per cent for shots in front of the screen plane,” explains Hindley. “We have to be a little conservative because we are conscious of consistency for both small and large screens” – the 3D feed of the men’s final was also sent to 150 cinemas in France and Spain.

Each rig position was manned by a dedicated CAN convergence puller who fine-tuned the appropriate convergence for optimum 3D. Pairs of discrete feeds from each 3D rig were then fed into the AMP OB truck via four 3D Processors, where CAN’s stereographers and AMP’s technicians monitored precise aspects of all the rigs for immediate corrections. They also kept in constant communication with the directors, vision mixers and convergence pullers, to make them aware of any issues that arose and any required maintenance to the rigs. 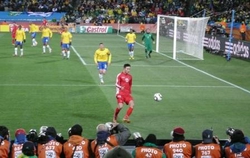 From the first kickoff on June 11, SENSIO® 3D technology enabled soccer fans all over the world to view 25 FIFA World Cup matches live, in 3D and on the big screen. Over the 30 days of the championship, over 4,500 screenings of its most popular games took place across the globe in 475 cinemas in 33 countries.

South Korean soccer fans were able to watch World Cup action in 3D at 50 cinema screens across the country using 3D glasses. This ground-breaking broadcast for South Korea enabled soccer fans to get closer to the action than ever before, making this huge global sports event an even more engaging experience for viewers. Ericsson has supplied CGV with its EN8090 MPEG-4 AVC HD encoder and RX1290 receiver solutions, with video being distributed over an LG Telecom fiber network.

3D Carmen Coming to a Cinema Near You

In a partnership with global 3D cinema technology provider, RealD, the Royal Opera House (ROH) will bring operas and ballets exclusively to RealD equipped cinema screens around the world offering a stunningly realistic entertainment experience using digital 3D technology. The first opera to be filmed and shown in RealD 3D will be Bizet’s Carmen, the world’s most popular opera and a firm favorite with Covent Garden audiences. Carmen was filmed in June for autumn 2010 release in theatres.

The very successful production of Carmen by director Francesca Zambello was specially filmed using 3D cameras over two sessions during which the complete opera was performed with the cast including Christine Rice, Bryan Hymel and Aris Argiris. 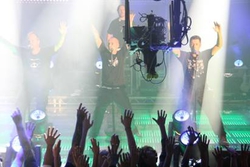 The concert by "Die Fantastischen Vier", Germany's leading hip-hop group, was broadcast live in 3D by satellite to 91 cinemas across Germany, Austria, Switzerland, Luxembourg and Belgium. Equipped with 3D glasses, they experienced their favorite hip-hop band in 3D – at the exact same time that the concert took place.

The live broadcast of concerts in 3D constitutes a technological novelty: While in post- production it is easy to edit and depth grade 3D material, a live situation requires immediate adjustment of stereoscopic parameters in order to guarantee a perfect 3D experience for the audience. 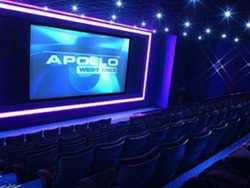 The 3D revolution is here to stay and British cinema-goers are in for the experience of a lifetime at Europe’s first all 3D multiplex. Apollo Cinemas, the cinema chain revolutionising the movie-going experience in the UK, has today announced the opening of the first fully digital, all 3D multiplex in Europe. Working in conjunction with Sony Professional and RealD, Apollo are opening one of the most technologically advanced cinemas in Europe. Apollo’s new multiplex will be home to six digital cinema screens, each of which will be equipped to display stunning 3D.

Opening on the 30th April 2010 at St. Catherine’s Walk, Carmarthen, Wales, Apollo’s site was the next step of cinema experience as we know it, bringing the thrill of 3D to Carmarthenshire for the very first time and creating a world-class digital cinema for its guests. In addition to six Sony 4K Digital screens displaying RealD 3D, the new multiplex has a fully licensed bar, Costa Coffee and Haagen Dazs Ice Cream concession.

Christie®, the leader in digital cinema projction technologies, announced that it has shipped and installed more than 12,000 digital cinema projectors worldwide, achieving a new industry milestone and strengthening its leadership with a 65% share of the total global market. The accomplishment includes the installation of more than 2,000 DCI-compliant Christie Solaria™ Series 4K-ready projectors. Christie was also the first manufacturer to surpass the 5,000 digital cinema milestone in the Fall of 2008 and the 7,500 installation mark early in 2009.

In Europe, Christie continues to hold a commanding 54% market share. Over the last five years, the leading European, Middle Eastern and African exhibitors have selected and installed Christie digital cinema projectors – including Arts Alliance Digital Cinema (AADC) through the roll-out of the digital screen network for the UK Film Council. This marked the world’s first digital cinema deployment on a large scale. 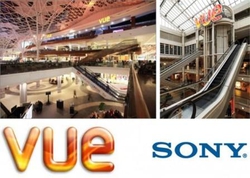 Vue Entertainment, one of the UK’s leading operators and developers of state-of-the-art multiplex cinemas, has reached an agreement in principle with Sony Europe to install 4K digital cinema projection systems across its circuit.

With over 36 million customers every year at its 68 sites and 657 screens, Vue Entertainment plans to become the largest cinema circuit entirely equipped with Sony 4K digital technology in Europe. This would mark the start of Vue’s full transition to digital projection and provide Vue audiences with the most state-of-the-art on-screen presentation available, delivering both a fully immersive 3D experience and superior 2D quality, thanks to Sony’s unique 4K technology. 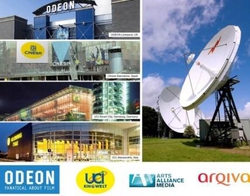 Odeon UCI, one of Europe’s leading cinema exhibitors and the world’s largest outside of the Americas, has chosen to deploy Arqiva’s Digital Cinema Satellite System. The agreement, working through Arqiva’s Digital Cinema partners Arts Alliance Media, will see Arqiva install its professional satellite receive equipment at nearly 100 cinemas for UCI in Italy and Portugal, UCI Kinowelt in Austria and Germany, and Cinesa in Spain. This will enable the delivery of DCPs and live events via Arqiva’s Digital Cinema platform on IS905. 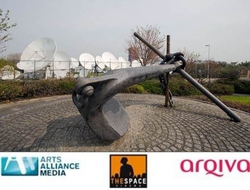 Barrie Woolston, Commercial Director at Arqiva Broadcast & Media, said: “We are very excited to be extending our Digital Cinema network into Italy – our ninth European territory. The Space is one of the country’s largest exhibitors and their decision to deploy our professional satellite receivers, alongside Arts Alliance Media’s Theatre Management System, is a strong testament to the value of our satellite based electronic delivery system. After a phased roll out each cinema will be able to electronically receive DCPs and live content via our IS905 platform. This deployment, across the Space circuit, adds still more momentum to the roll out of our Digital Cinema Satellite Distribution System across Europe.”