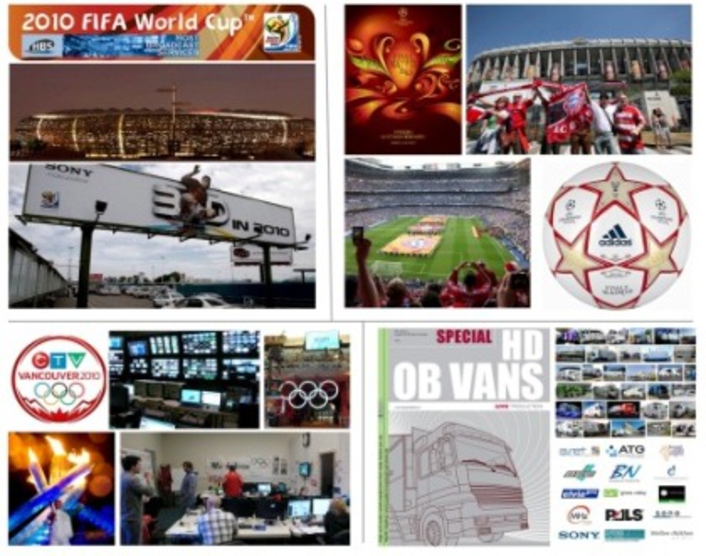 In this Issue we Cover

• Media Delegation at the IBC in Johannesburg

• CTV in the Vancouver 2010 Olympic Games

Media Delegation at the IBC in Johannesburg 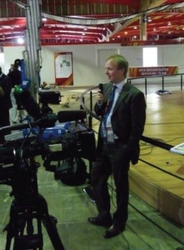 With 20 days to go to the start of the 2010 FIFA World Cup™, the IBC welcomed a Media Delegation, includ­ing some 120 journalists, as part of a tour of its major facilities on 21 May. During a three-hour event, the at­tendees were given an extensive tour of the premises and listened to detailed explanations about the role of the IBC in the broadcast of the 2010 FIFA World Cup™. Four major stops were made during the tour, including the Aggreko Generator Park, the IT Command Centre (ITCC), the African Plaza, and the Master Control Room (MCR).

At the Aggreko Generator Park where both Rupert Soames, CEO of Aggreko, and Cyril Ramaphosa of the Shanduka Group, provided details of the overall power set-up and their respective companies' role in providing this. The tour continued with a visit of the IT Command Centre (ITCC) and the floor was given to Phumlani Moholi, Chief IT & T Officer of the LOC and Dick Wiles CEO of Match IT, who addressed the role of the overall IT infrastructure. Outside the Master Control Room (MCR), the hub of broadcast operations at the event, both Niclas Ericson and Francis Tellier, CEO of HBS, underlined the importance of the MCR and highlighted the major new developments in the production plan for the event, including the Mobile Match Feed and 3D coverage of 25 matches.

A season of change for the UEFA Champions League culminated with a familiar face lifting the trophy as José Mourinho led FC Internazionale Milano to a 2-0 victory against FC Bayern München at the Santiago Bernabéu in Madrid. At the conclusion of his 700th match for Inter, Javier Zanetti lifted the trophy and added the continental crown to the Italian league and cup double Inter had already secured. Diego Milito scored in each half to capture Inter's third European Champion Clubs' Cup and the second for Mourinho who, following his 2004 triumph with FC Porto, became just the third coach after Ottmar Hitzfeld and Ernst Happel to win the title with two clubs.

In addition to the coverage in HD (by MediaPro) the showpiece was produced in 3D by the Belgium production facility Outside Broadcast and the signal was distributed via Sky UK to the 3D pubs in the UK and Ireland and to two 3D cinemas in Spain. The 3D signal was generated by six stereo camera pairs and eight up-converted 2D sources.

CTV in the Vancouver 2010 Olympic Games 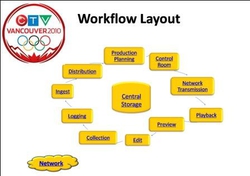 A major part of the production success was the combination of technology put in place by the in-house engineering team. The kinds of systems used in past Olympics were fine for a couple of hundred hours of broadcasting but we had to develop systems that could handle thousands of hours. To achieve this we had to make sure every frame of video was recorded. And not only that, but recorded along with the information that made it possible to find it again.

When CTV and its partners decided to pursue the bid for the Vancouver games the bid included a commitment to broadcast every moment of competition live. The bid was successful. The CTV Engineering team embed staff with other broadcasters at both Torino and Beijing. Watching these broadcasters at work underscored how important media management was going to be in Vancouver.

In 2008 3D discussions began among Sky, Telegenic and Sony. Early on it was recognized that there couldn’t be one truck for both 3D and 2D because the perspective of 3D pictures is different from the 2D pictures. Also new personal has to be integrated in the 3D truck. In addition to a colour matching team a stereographic team needs its working space. And as there was no truck out there that could accommodate two camera channels for each stereoscopic rig, with inputs for at least eight rigs, all three companies decided to co-operate and to design a 3D truck from scratch. Another reason for a dedicated 3D truck was the audio feed, because the use of the 5.1 from the 2D trucks wouldn’t suit the requirements of 3D. The existing 5.1 microphones installed at grounds for 2D will only be the source for the 3D surround sound – additional signals have to be send to the mixing desk. There will also be commentary specifically for 3D service, since the action will be presented differently from that on 2D channels.

The triple expanding 3D truck with more than 63 square meters of interior space, houses up to 12 Sony HDC-1500R camera pairs with a unique T-block option used on 3D camera rigs from 3ality to capture the content in 3D. The state-of-the-art automation process and the full metadata capture built into the 3ality camera platforms ensure compelling, immersive and dynamic programming during a 3D live coverage. 3ality Digital’s automated 3flex camera rigs are manufactured to aerospace-level precision and use artificial intelligence to sense the environment around them. Each of the 12 stereo camera rigs is either a side-by-side or a beam splitter-mirror rig, and the stereographic team will use the MPE 200 controller to set the depth of the images. 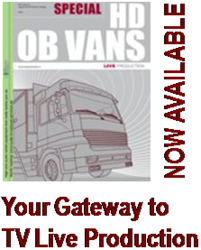