The First Half Year Online - A Short Review in Pictures 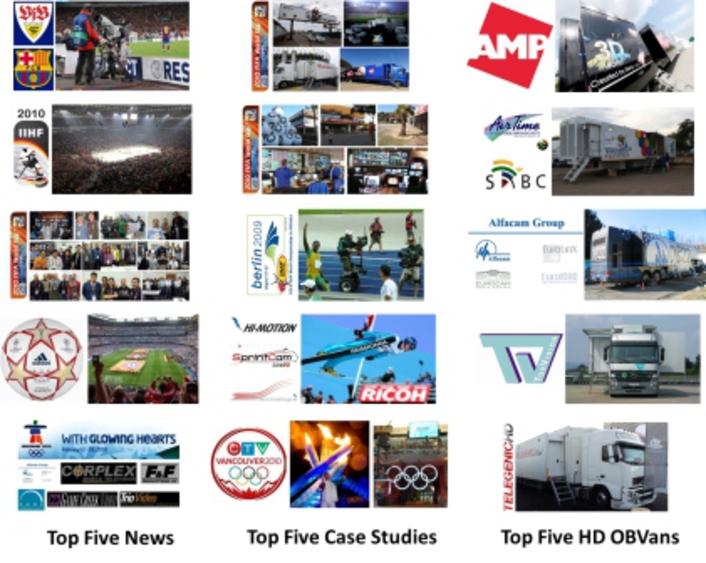 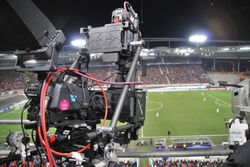 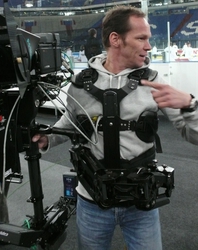 Welcome to the future. The future is now. Gelsenkirchen has put on a show for the ages: A world record 77,803 fans came to watch Germany take on the U.S. at the opening game of the 2010 IIHF World Championship in Gelsenkirchen. Plazamedia produced the game for Constantin Sport Medien with the 3D specialists from TopVision. LIGA total! exclusively delivered the game live via its 50MB ready internet platform to their subscribers on channel 319 on the T-Home Media Receivers. Plazamedia/TopVision was shooting in a soccer stadium. Veltins Arena, the home of Bundesliga football club Schalke 04 was converted into a hockey arena for the world record event. 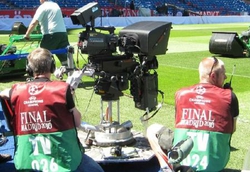 A season of change for the UEFA Champions League culminated with a familiar face lifting the trophy as José Mourinho led FC Internazionale Milano to a 2-0 victory against FC Bayern München at the Santiago Bernabéu in Madrid. At the conclusion of his 700th match for Inter, Javier Zanetti lifted the trophy and added the continental crown to the Italian league and cup double Inter had already secured. Diego Milito scored in each half to capture Inter's third European Champion Clubs' Cup and the second for Mourinho who, following his 2004 triumph with FC Porto, became just the third coach after Ottmar Hitzfeld and Ernst Happel to win the title with two clubs.

Media Rights Licensees at the IBC 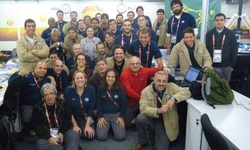 A selection of Media Rights Licensees at the IBC and the links to their portraits:

Media Rights Licensees at the IBC

High-definition production equipment from Grass Valley™ will be extensively used in temporary production studios and on-site at many of the venues in and around Vancouver, British Columbia, Canada, to bring home the live and tape-delayed telecasts of this year’s Winter Games in pristine HD to millions of worldwide viewers from February 12–28.Mobile production companies from around the world, including Alfacam (Belgium), Corplex (Northfield, Ill.), Dome Productions (Toronto, Canada), F&F Mobile Productions (Clearwater, Fla.), Game Creek Video (Hudson, N.H.), and Trio Video (Chicago), will all be on-site at the various venues. 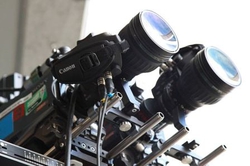 In December 2009, FIFA and Sony announced plans for 3D coverage of 25 FIFA World Cup matches. Integral in the selection and adoption of the technologies were Peter Angell, HBS director of production & programming, who served as FIFA special 3D project leader, and Duncan Humphreys, 3D consultant to HBS for the World Cup and partner in UK-based 3D production company Can Communicate. The aim was to deliver to TV-viewing soccer fans a new experience of their sports and to cheer even more about the World Cup. The tournament should help to kick off what TV makers, networks – and advertisers – hope to become a new dimension in home sports viewing and sports viewing in cinemas. 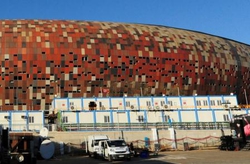 Appointed as the Host Broadcaster for the 2010 FIFA World Cup™ in South Africa, HBS has decided to renew its successful collaboration with EVS for the supply of instant tapeless technology and support services during the production of this world class event. The Production Plan for the 2010 FIFA World Cup™ is based on standards ‘substantially similar’ to the 2006 FIFA World Cup™, with some innovations and improvements. Other partners of HBS at the IBC and at the Venues are Barco, Camera Corps, Dolby, Grass Valley, Lawo (ABS), Media Broadcast, Panasonic and Riedel. 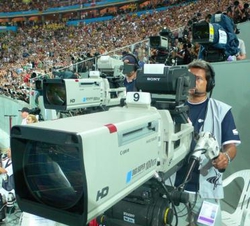 For the broadcasting of the 12th World Athletic Championships from 15th - 23rd August in Berlin, the German public broadcasters ARD and ZDF established the host broadcast service BERTA (Berlin Radio Television Athletics) to produce the official world feed of the championships in 1080i and to deliver it to broadcast right holders in more than 165 countries. For the installation and the operation of the technical infrastructure BERTA hired the Berlin based production company TopVision for all the events in the Olympic Stadium, while SWR together with Betamobile produced the signals of the walking and marathon disciplines at the Brandenburg Gate. 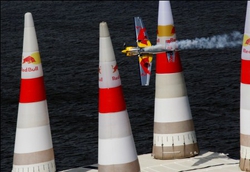 Currently there are four different ultra-motion camera systems for live productions available in Europe: The Hi-Motion from ARRI Media, the Superloupe from DVS, the SprintCam from i-movix and the Antelope from LMC. We asked all four companies to answer 14 questions and to explain the advantages of their respective camera system. Finally three companies responded. Please find following their answers. This should help you to rent in the right system for your live production. As the recording and playback device (in addition to on-board RAM recorders) all three systems interface to the LSM XT[2] hard disk recorder from EVS.

In the history of Olympic broadcasting, CTV’s production was unique. The incredible number of hours broadcast was unprecedented. The production model had never been used before. In the end it was an overwhelming success. The number of viewers had never been seen before in Canadian broadcasting. It has become a defining moment in Canadian Television history.A major part of the production success was the combination of technology put in place by the in-house engineering team. The kinds of systems used in past Olympics were fine for a couple of hundred hours of broadcasting but we had to develop systems that could handle thousands of hours. To achieve this we had to make sure every frame of video was recorded. And not only that, but recorded along with the information that made it possible to find it again. 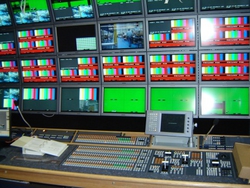 Regarded as Southern Africa's foremost facility provider, AirTime can be your partner in delivering your dream to the viewer.Our OB units range from small 4-camera units right up to the pride of our fleet, fully digital High Definition dual expanding side trucks, fitted with the latest technology. AirTime provides Digital Satellite units with full redundancy and together with its digital mobile microwave links, AirTime can bring you mobile coverage of many events.In addition to this, AirTime can offer many sub-contracted services from catering to helicopters and take care of the logistical arrangements. AirTime’s first High Definition Unit was delivered in October 2006 and is in high demand. AirTime has been busy replacing the rest of its fleet with the latest HD technology and is now proud to say that they have completed the process. 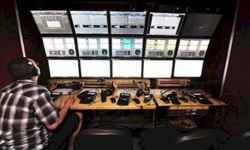 "Car 8" has just been retrofitted to be 3D ready and was put into service at the beginning of April 2010. The internal design was adapted for multi-camera 3D shooting. The van is equipped with Sony 3D MPE-200 Boxes and 3D layers. Main and second production areas, vision control area and one of the two VT areas can accomodate eight “convergence” technicians and the 3D production director. AMP’s Car 8 was on location in South Africa producing the 3D games for FIFA/HBS in Ellis Park and Soccer City in Johannesburg. 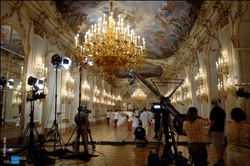 Alfacam is a Belgium-based company providing TV facilities and services to broadcasters and production houses. Its fleet is being deployed all over the world. Alfacam's OB trucks have operated overseas in diverse locations such as Ghana (Africa Cup of Nations, 2008), Brazil (Pan American Games Rio, 2007), Austria (Salzburger Festspiele, 2006), China (Olympic Games Bejing, 2008), Canada (Olympic Games Vancouver 2010) and South Africa (FIFA World Cup 2010)Alfacam operates for more than 92% of the time outside Belgium, offering professional services throughout the world. Therefore the company has set up a structure with several project managers, who coordinate and manage the productions in their specific areas. 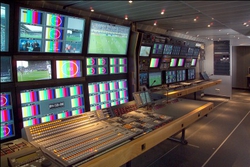 TopVision is a German-based company providing TV facilities and services to broadcasters and production houses. TopVision has provided the production facilities for the first 3D production in Germany, the coverage of the champions league game VFB Stuttgart – FC Barcelona. Furtheron the company provided the production equipment for the first 3D Bundesliga game Leverkusen – Hamburg and was on location to produce the opening match of the IIHF world cup in 3D. TopVision is regularly producing the games of the German football Bundesliga, but also is heavily involved in the production of international events like the IAAF World Athletics Championships 2009, the Salzburg Festival or the New Years Concert in Vienna. 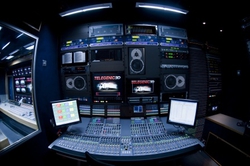 Telegenic has a single-minded commitment to the excellence of its performance. Whether your operation calls for sits superb 20 camera digital units or its 12 camera digital unit – perhaps in harness with its sophisticated digital VT unit – a team of dedicated professionals will ensure the technology is in perfect working order. Currently Telegenic’s T16 was on location in South Africa producing the 3D games for FIFA/HBS in Cape Town, Durban and Port Elizabeth, while Telegenic’s T18 was producing in 3D for Sky in the United Kingdom.

Live-Production.TV – the first half year online 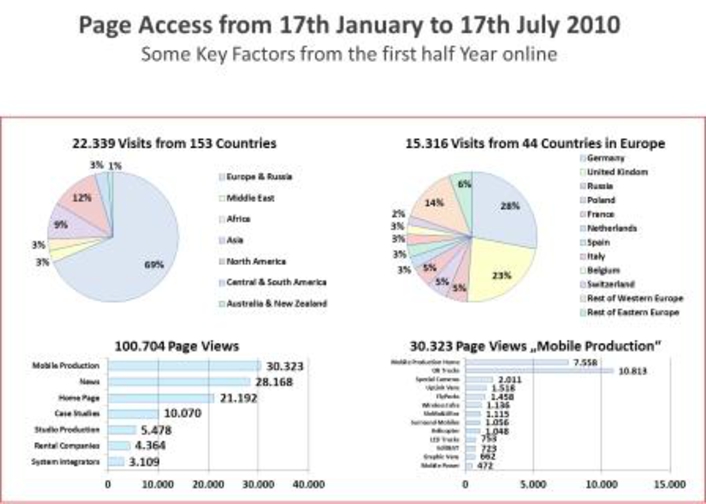 A worldwide reference database for the Live Production Community