There is less than three weeks to go until Russia face New Zealand in the Opening Match of the FIFA Confederations Cup 2017 at the Saint Petersburg Stadium. But before a ball is kicked across its surface on 17 June, Igor Stravinsky’s "The Firebird" will sound across the stadium, signalling the beginning of the quest to be crowned winner of the Tournament of Champions.
The Opening Ceremony of the FIFA Confederations Cup will take place around two hours before kick-off (which is at 18.00 local time) and will last about 20 minutes. The colourful presentation will tell viewers about Russia’s traditions, history, culture and nature, as well as more specifically about the four cities hosting the tournament: Saint Petersburg, Kazan, Sochi and Moscow. 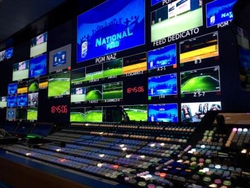 SAM worked with long term partner Video Progetti to help design the truck to support NVP’s OB production services that need to encompass SD, HD, UHD, SDR and HDR content simultaneously. The natural choice for managing multiformat productions is SAM’s Kahuna switcher, eliminating the need for external conversion. To support multiformat switching SAM supplied its Sirius 840 router. The high performance router allows any combination of signal formats and processing, with no limitations on signal timing or synchronization, and no compromises on redundancy, monitoring or expansion capability.

The implementation for the OB van is scheduled to start end of July. The South Korean systems integrator MBC C&I, part of the MBC group, together with BFE and its South Korean partner Dong Wha AV, will act quickly to integrate KSC CORE into the OB van. The system will play a key role in the vehicle’s setup by controlling and monitoring the broadcast infrastructure as well as 10 4K cameras. MBC is one of the country’s leading broadcasters and uses its fleet of OB vans to report on top sports events and news throughout the country.

Audio-video technical management and client support company TV Tech, Inc. launched its first remote audio production truck in 2016, recording and mixing a 14-show music concert series for Verizon’s GO90 live streaming service, and has been a major player in broadcast production for concerts/entertainment ever since. The company has now relaunched the 5.1-channel surround music mix truck after installing an infrastructure of RedNet Dante™-networked audio interfaces from Focusrite. TV Tech, Inc. music mixer Thom Cadley notes that, after watching various audio-over-IP protocols emerge over recent years, “We concluded that Dante was the most embraced, so we felt that was a pretty easy call to make." 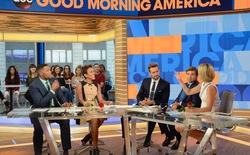 As one of the largest lighting design firm in the broadcast industry, LDG (Lighting Design Group) works extensively for the major networks, and beyond, across the globe. It’s impossible to turn on a television without seeing their design work in action. When Good Morning America expanded their production facilities at Times Square Studios late last year, LDG’s Senior Vice President of Design, Dennis Size, lighting designer for GMA, specified 20 High End Systems SolaSpot 1500s to augment the new space. The multi-Emmy winning LD designed the original GMA at the Times Square facility nearly twenty years ago. 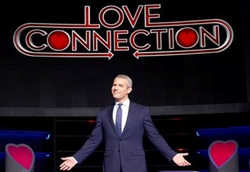 Lighting Director Matt Firestone recently installed 30 Martin VDO Sceptron LED video fixtures on the set of Love Connection, the classic 1980s-era game show which will return to television in May 2017. Airing on Fox and hosted by Andy Cohen, the reboot will feature the same familiar game format, with a completely modernized set design. Firestone used the VDO Sceptrons to create a dynamic background during specific shots when both the contestant and the host are on screen. "We wanted to create an animated background that could move organically and make the shot more interesting—without putting up a video wall that would distract from the dialogue,” said Firestone.

Mediacorp’s new creative epicentre for broadcast and news production has recently been equipped with an IHSE Draco tera KVM matrix switch system for KVM control and access of remotely located broadcast servers. Three separate systems were required in the news, studio and media and radio operations areas to ensure instant and flexible access to equipment, whenever and wherever operators needed it. Qvest Media, responsible for the entire operational project planning and integration, teamed up with IHSE APAC’s local system integration partner Broadcast Engineering Services to design and deliver an efficient and robust KVM switching system for the media campus.

The announcement follows a comprehensive tender process, when interested technology providers were invited to submit their proposals. The relevant departments within FIFA examined the use of VAR technology during former trials at the FIFA Club World Cup 2016 in Japan and various tests done in international friendly games. “FIFA is confident that the choice of Hawk-Eye as the VAR technology provider for the upcoming FIFA tournaments will satisfy the technological requirements needed for such an important innovation which is aimed at enhancing integrity and fairness in our game,” FIFA’s Deputy Secretary General Zvonimir Boban commented.

Antenna Hungaría is Hungary’s premier OB company, providing services to third-party broadcasters as well as for its own terrestrial TV and radio operations, and satellite channels. Recently, Antenna team members visited Lawo’s headquarters in Rastatt, Germany, for the handover of four Lawo consoles that are to be incorporated into the fleet. With a total of 12 OB Vans in action – most equipped with Lawo audio mixing – and a new one under construction, Antenna will be fully engaged in managing broadcast signals for the upcoming 2017 FINA World Championships to be held in Budapest and Balatonfüred. 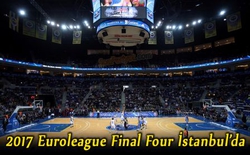 ACTAMEDYA has executed infrastructural cabling and monitoring of ten locations including media centre, media tribune, referee and observer rooms, referee desk and court-side positions. Besides 350 monitors, ISDN lines and commentary positions were set up for the event. While the preparations are at its last stage for the finals where CSKA, Real Madrid, Olympiakos and Fenerbahce will fight for glory on 19-21 May, the technical infrastructure of the dome that will host 20.000 basketball lovers was prepared in 20 days with 20 team members. 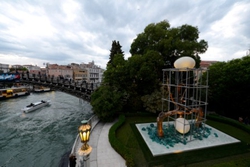 Protected Paradise’ is a striking, 12 metre high, mixed media installation created by Belgian artist Koen Vanmechelen … located in the garden of the Palazzio Francetti for the 2017 Biennale di Venezia (Venice Biennale) contemporary visual art exhibition. Luc Peumans of Painting with Light was contacted to light the work, a thought-provoking piece encouraging viewers to engage and question the impact of humanity on a rapidly transforming planet! It consists of two bronze trees, a 4 metre bronze chicken claw (symbolic of the human being), two eggs made out of marble and fibre respectively (the eggs of hope) and an impressive cage constructed from recycled material, made by ECO-OH! 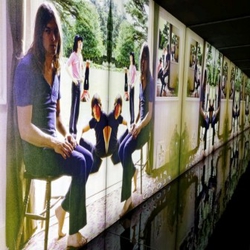 On Saturday 13 May, following years in the making, The Pink Floyd Exhibition: Their Mortal Remains will opened at the Victoria and Albert Museum, London (V&A). This major spring exhibition marks the 50th anniversary of the band’s first album, ‘The Piper At The Gates Of Dawn’, and debut single, Arnold Layne. The exhibition is promoted by Michael Cohl and Iconic Entertainment Studios. The scale and ambition of Pink Floyd’s imagery and live performances are encapsulated by several interactive, floor-to-ceiling installations by Stufish. From a massive representation of ‘The Wall’ stage set used during Pink Floyd’s original 1980-1 tour with the giant inflatable schoolteacher looming over ‘The Wall’ into the vaulted ceiling. 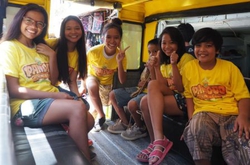 Ideal Systems announced that it was selected by PANDOO Foundation to provide 360 VR Camera, equipment and editing services for the first 360° 3D video production to be shot on location in Cebu, Philippines. PANDOO Foundation is a non-profit organization whose mission is to empower and unite kids to take action for positive change, and whose vision is to enable a sustainable movement led by kids to build a better world. Aroon Tan, CTO/Executive Producer working on PANDOO productions commented, “In keeping with our innovation of bridging the “virtual” game world to our real-world social impact causes we wanted to shoot one of our projects in immersive 360 VR video." 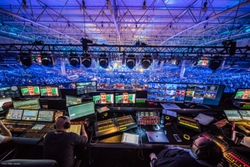 This year, 42 countries participated in the global TV phenomenon, each supported by a striking stage and light show embracing video, special effects and a procession of scenic props and costumes, all of which combined to make the lighting of this world famous event an ever more challenging proposition. Internationally renowned lighting designer and director of photography Jerry Appelt specified the new Claypaky Scenius Unico as the main stage workhorse fixture for his richly composed lighting design for this year’s Eurovision Song Contest, hosted at the International Exhibition Centre, Kyiv, Ukraine. 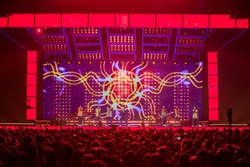 Robe Funks it Up with Bruno Mars

The dynamic, colorful and highly visual production design was originated by Leroy Bennett of Seven Design Works, who collaborated closely with a top creative team including lighting designer Cory FitzGerald and lighting director on-the-road Whitney Hoversten. 24K Magic is also currently one of the most talked about live shows of the year by the multiple Grammy award winning artist, following the release of his hugely successful third studio album of the same name at the end of 2016. The worldwide lighting contractor is VER who made the massive investment in Spikies which were delivered by Robe North America.

Production Resource Group LLC, (PRG), the world’s leading provider of entertainment and event technology solutions, announced today that a new product innovation along with the application of an industry-first technology solution – SPACEFRAMETM and a 4K Broadcast Camera System – have been integrated into the design, production and operations for the U2 The Joshua Tree Tour 2017. Both solutions demonstrate PRG’s dedication to innovating products that anticipate the needs of tour managers, designers and artists seeking to push boundaries and deliver a more immersive concert experience onsite or virtually. 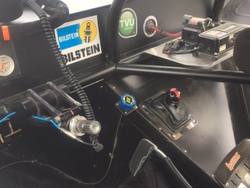 At the upcoming Granite State Pro Stock Series at Claremont Speedway in New Hampshire, both Devin’s skill as a driver and the boundary-breaking technology involved in video-over-IP transmission will be showcased live online. At the event, Devin’s super late model stock car will be outfitted with a TVU One mobile IP streaming newsgathering transmitter from TVU Networks – which enables high-quality video transmission from virtually anywhere, at anytime and under any circumstance including a car racing at speeds of 185 miles per hour or more.

At the Teradek Studio in the Mobile Journalism Conference, hosts David McClelland and Róisín Ní Thomáin interviewed guests in a more talk-show, rather than conference panel, format, allowing them to get into more detail with keynote speakers, and feature additional guests beyond the mainstage lineup.  Our focus on the production side was creating great quality webcasts using truly mobile-ready gear.  You can’t get more multicam-and-mobile than Teradek’s Live:Air workflow. Live:Air software on an iPad makes source inputs simple, finding and streaming any devices running Live:Air Remote software on the same network.

Streaming Through Rough Waters With Cube

It’s not everyday you get to turn on the TV and watch a regatta (rowing competition). As a seldom-televised sport, rowing doesn’t get as much love as other action sports do on television, despite being just as historic and having fans all around the world. But live video on social media today can be just as viable as traditional TV broadcasts, and has given lesser-known sports an opportunity to gain sizable followings. The USRowing Association is no stranger to this, having recently taken all of their regattas directly to YouTube Live to let fans watch events like the San Diego Crew Classic and the Big 12 Women’s Rowing Championship in Tennessee from the comfort of their homes.