Media professionals involved in the development of a broadcaster's production platform are invited to:

At the cutting-edge of technology, BCE has a long history of using new solutions to pave the way to the future of media. As a pioneer in mass digitisation, BCE was also the first European company to drop tape and use a complete file-based workflow on its premises.

“Looking towards the future, we have decided to move to new premises. We have always anticipated the merge between IT and Broadcast technologies and decided to stop talking about new solutions and change the complete workflow of our activities to IP.” Comments Andreas Fleuter, Special Project Manager at BCE.

After two years of construction, the shell of our new premises, RTL City, was finished and it was time to address the details. To do so, BCE prepared the transition to IP with key partners such as SAM and VSM (Lawo). Both companies partnered in this state-of-the-art project in order to deliver new solutions that will perfectly match heavy broadcast, production and post-production systems.

IBC2017 opens on 15 September at the RAI Exhibition Centre in Amsterdam. As of today we feature 58 companies and their approach at the IBC2017 Show. This list is continuously updated.

The link "IBC2017" will always show you the featured companies and events in alphabetical order. 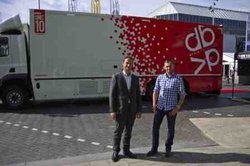 DB Video is specialized in multicamera and single camera recordings and postproduction. No challenge is too difficult! You can know us for filming Belcar and other races at Circuit Zolder, basketball premier league, European Parliament, Tomorrowland, De Vlaamse 10 for Ment TV, opera’s for La Monnaie/De Munt, all commercials for Plopsaland and many others,…. We have over 20 years of experience and create more than 2500 audiovisual productions a year. Working with DB Video stands for: professionalism, flexibility, creativity, customer service and fun! DB Video has been growing for over 20 years. We can count on the extensive experience of our team. We keep investing in the most up-to-date equipment. Our headquarter is centrally located between Antwerp and Brussels. Furthermore we have offices in The Netherlands and Luxembourg. 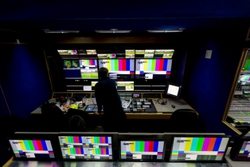 A state-of-the-art, triple expanding OB truck, UHD2 is home to a range of SAM technology including two Kahuna IP production switchers, IP Multiviewers and with SAM’s IP infrastructure technology providing the backbone. Also in the truck for IBC, SAM’s LiveTouch 4K/UHD replay and highlights system will be used for demonstrations.Timeline’s UHD2 is designed to support 32 Sony 4K cameras. Its two Kahunas enable SDR and HDR to be run simultaneously along with down converted HD outputs. The set-up allows production teams to work in VSF TR03 (SMPTE ST 2110 draft) – the first time this has been done in an OB truck – enabling Timeline to work with video and audio as separate essence flows within an IP workflow.

This year, Telegenic UK Deputy Head of Audio Simon Foster and Telegenic US Operation’s Manager Andrew Wisniewski undertook the re-design and commissioning of a complete overhaul of the T5 technical services. Telegenic chose a Riedel MediorNet de-centralized router to manage comms within the OB truck and the outfield operations, a Calrec Brio broadcast mixing console and RTS Telex intercom, and a SAM Kula Vision Mixer. At the heart of the operation was Lawo’s VSM (Virtual Studio Manager) system. The aim of the exercise was to update and streamline the US operation, and bring the truck’s technical facilities into line with parent company Telegenic Ltd, based in High Wycombe UK. Lawo VSM is used in five of the seven OB Vans operated by Telegenic’s UK division, and so it was an obvious move for the US truck to follow suit.

“Frontier raises the broadcasting bar for virtual and augmented reality productions with incredible levels of creative design freedom that are combined with hyper-realistic rendering quality for virtual sets that are much more natural and convincing,” said Gideon Ferber, Director of Marketing Product Management for Ross Virtual Solutions. “Modest studio spaces are made to look much larger and more impressive, and set design is quickly and easily changed for different applications delivering much more flexibility and profitability – a true smart production investment.”

The MK 4 digital is the microphone of choice for dubbing and podcast applications, while the ClipMic digital and MKE 2 digital clip-on microphones for iPhones und iPads ensure great sound for self-produced videos. The portfolio of products on display is rounded off by shotgun microphones from the MKH series for film production, as well as wireless microphones from the Digital 9000, Digital 6000, 2000 and evolution wireless series, which are used for ENG and broadcasting. Since 2010, Neumann.Berlin have expanded their expertise in electro-acoustic transducer design to also include the studio monitor market. In 2016, the Sennheiser Group had sales totalling €658.4 million. 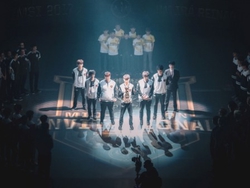 Robe Summoned for League of Legends in Rio

The 15 day Group / Knockout games and their Finals in Rio was one of two LoL MSI events hosted in Brazil that featured 5 team players per game and an eye-catching production including giant LED screens, dramatic lighting and lots of audience interaction, together with colourful and vibrant Opening and Closing Ceremonies, explained LPL’s Caio Bertti, who project managed the lighting elements for Riot Games. The production lighting was designed by Arnold Serame of LA-based Serame Design and directed on site by Mathew Stovall. The event was staged in the round, so high powered long-throw fixtures were needed all around the space for impact and WOW moments. BMFL WashBeams were a perfect solution.

The live streaming of the two-day “Return of the Legends”, which relied on the high speed connections provided by PCCW Global, attracted around five million viewers online. The tournament was hosted by Hong Kong Tourism Board on August 4 and 6 and was part of the event celebrating the 20th anniversary of the establishment of the Hong Kong SAR. The “Return of the Legends” tournament also marked the first time ever in Hong Kong that so many former world champions had come together to compete in the world’s most watched eSports game, League of Legends (LOL). They formed four professional teams, representing Europe, North America, mainland China and Taiwan/Hong Kong/Macau.

Video refereeing has become a vital element of modern Ice Hockey. Europe’s Continental Hockey League (KHL) now dictates that video referee systems are required in addition to investigating goal line incidents also to control blue line offside situations.  This requirement means that the system must be able to record and replay an additional four channels, so judges can clearly monitor all in play incidents. Following this new requirement, the Ak Bars team, based in Kazan, Tatarstan, has purchased four additional slomo.tv vR-Cam cameras and upgraded its existing system that it acquired in 2014 to the newest version - videoReferee® 4G. 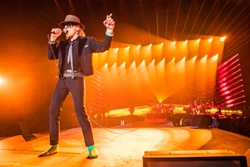 When “panic rocker” Udo Lindenberg goes on tour it becomes total art for the eyes and ears. And Günter Jäckle, his lighting designer and operator for many years, is likely to be at his side for many years to come. The 71-year-old does not think he will ever stop, and promises his fans another 30 years of well-refined panic with orchestra. For this tour, the design was created in the show lab of Michael Schenk's company, epicto in Edingen-Neckarhausen. As with the previous tours of the panic-rockers, Jäckle is again using a lot of fixtures from Karlsbad-based GLP. On board are 28 brand new JDC1 strobes, 24 impression X4 Bar10 as well as 24 GT-1 hybrids 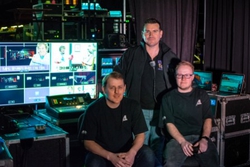 Adlib Laughs Long and Loud with Mrs. Brown & Her Boys

The hilariously funny, successful Brendan O'Carroll comedy creation ‘Mrs. Brown’s Boys’ continues its popular live touring version, leaving a wake of smiles and laughs, with full technical production – lighting, sound, video, rigging and crew – supplied by Adlib. Adlib has been involved with Mrs. Brown’s Boys live since its very first theatre tour in 2000, and since then it’s become a multi award winning TV show and a massive arena live show phenomenon! The show has continued to invest in production values and technology to keep everything moving forward along with the humour. 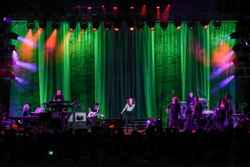 American musical theatre star, Idina Menzel, recently played the Royal Albert Hall, as part of the UK leg of her 2017 world tour. The singer, famous for her roles in Broadway blockbusters Rent and Wicked—is also known for her Oscar and Grammy award winning song ‘Let it Go’ from Disney’s animated film Frozen. Her current tour features a magical medley of numbers from the musicals she’s appeared in, as well as her own solo songs, covers, and the instantly recognisable, Let it Go. Production, lighting and video design for the tour is by Abigail Rosen Holmes, who has also designed shows for artists such as Miley Cyrus, The Cure, Shakira and The Pet Shop Boys. 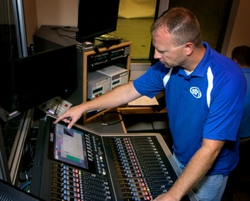 The high-tech Austrian company CAMCAT-Systems GmbH is one of the world’s leading manufacturers and service providers for remote controlled cable car camera systems for live broadcast and film productions. Next to reliable high-speed cable cars, one thing CAMCAT knows for sure is the importance of a versatile high-quality camera. The company worked closely in partnership with ON-AIR Broadcast & Multimedia Solutions GmbH, the Austrian Channel Partner for Grass Valley, a Belden Brand, selecting the LDX C86N Compact Series Camera to meet the growing demand for spectacular live sports video footage. This camera delivers stunning imagery and the business flexibility for all applications where a compact form factor is required. 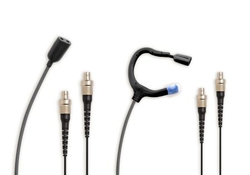 Showcased in April at the 2017 NAB Show in Las Vegas, the CO2-8WL lavalier garnered immediate buzz and critical acclaim from attendees and media outlets alike, winning “Top 5 NAB Show Products” acclaim from a leading industry publication. The company has been fielding demand for the new product since its unveiling and has sped up production in order to fulfill customer orders. The redundant microphones’ unassuming size and styling belie the significant impact it brings to the world of broadcast and live performance audio:  all-in-one, single source microphones with built-in back up functionality. 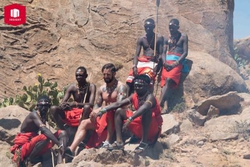 INSIGHT TV, the world’s largest producer and broadcaster of adventure travel and extreme sports genres in true, unscripted 4K UHD HDR, is launching its new cricket show Beyond the Boundary, presented by Somerset cricket legend Peter Trego. The six-episode series, which begins on 10th August at 2200 CET on INSIGHT TV and INSIGHT.TV, was shot in Singapore, Sri Lanka, Rwanda, Kenya, South Africa and Dubai. Each episode follows stories of people and communities who have found that their love of cricket has enabled them to find positivity and happiness despite adversity. Presented by Somerset County Cricketer Peter Trego, Beyond the Boundary highlights the immense power of cricket from far flung corners of the earth. 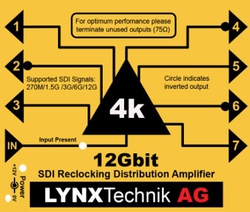