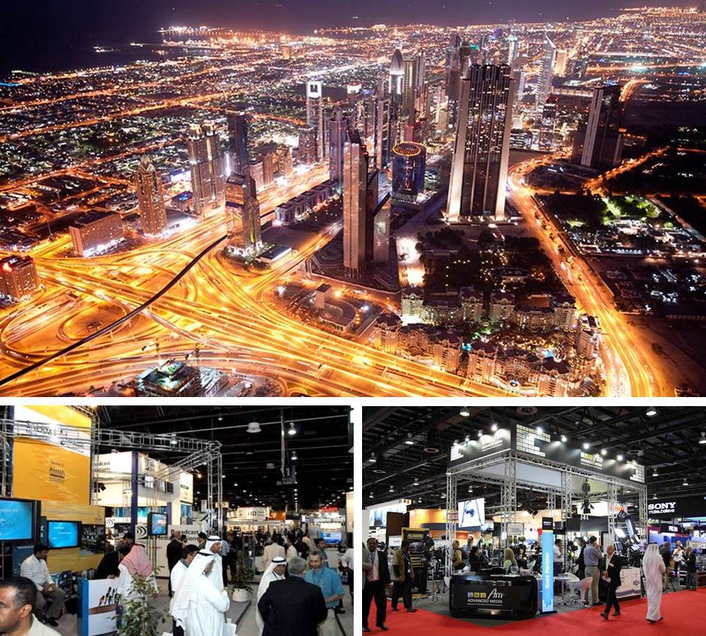 CABSAT is a networking platform for businesses involved in capturing, exchanging, managing, distributing and monetizing content

For 21 years, CABSAT has evolved to be the number one event in the Middle East, Africa, and South Asia region for all industry professionals within the Broadcast, Satellite, Content Delivery and Digital Media sectors. CABSAT covers the creation, exchange, management, distribution and monetization of all filmed entertainment and radio content. The event connects live content opportunities and encourages collaborative partnerships which brings together the world’s leading content producers and connects them with every imaginable delivery platform.

The following exhibitors have a focus on TV live production 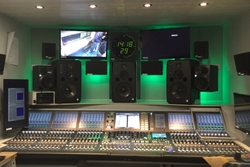 Mixes of all kinds are handled by Lawo mc²66 consoles, providing the recording, sources and TB signals needed for large-scale live events using a sapphire mastercard-equipped DALLIS router frame. The different processes are visualized and operated by way of a multi-page graphical user interface with touchscreen operation. This is where the VisTool software provided by Lawo’s radio tools portfolio comes into its own. For the playout – also in multichannel mode – it is possible to dock a sapphire console at any time. The great benefit of this approach is that all audio and control signals are processed within a closed system. No complex or, above all, expensive integration of external intercom systems is needed. Audio signals are exchanged via MADI or Ravenna links, and control signals are relayed on the protocol layer within the network. 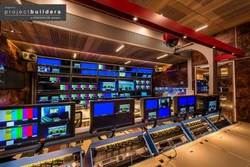 CTV, part of Euro Media Group and one of the largest independent OB companies in Europe, has equipped its three new OB trucks with RTS intercoms. Among them are CTV’s new flagship OB11, which features an ADAM matrix and 32 RTS keypanels. As one of the largest OB trucks ever built, the 4K-capable OB11 truck has so far covered Sky Sports’ cricket broadcast, the Victoria’s Secret Fashion Show, the National Television Awards and the BBC Sports Personality of the Year awards. CTV acquired three new OB trucks during 2014: The OB3, OB14 and the new CTV flagship OB11. The latter ranks among the largest OB trucks ever built, with four production areas and an expandable size of 84 square meters. 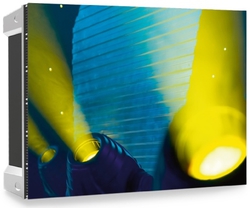 Brilliant background images for live newscasts of Deutsche Welle: Under the direction of the system integrator BFE Studio und Medien Systeme GmbH, a curved video wall by eyevis, assembled of 144 high-resolution LED-modules, with a pixel pitch of only 2.0 mm is currently being installed in Studio 3 of the German foreign TV network in Berlin. On the 24 m² video wall, images, graphics, and videos to support the new English channel of Deutsche Welle will be displayed through three full HD signals. The studio in Berlin will be put into operation in mid June – just in time for the globally available information channel on 22 June 2015. 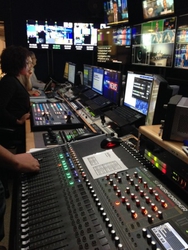 Blackmagic Design announced that Sky News in the UK has implemented Blackmagic’s ATEM 2 M/E Production Studio 4K with an ATEM 2 M/E Broadcast Panel and Smart Videohub as part of an overhaul to the news organization’s broadcast systems in “Studio D”. A small team of multi skilled staff use the studio to create three minute news summary, which are then published across Sky News’ digital outlets. The studio also has the layout and facilities available so that a bigger gallery set up, with producer, director, vision mixer and sound supervisor, all managed by a technical director, can be deployed on more complicated projects if the need arises. 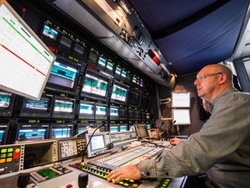 German public broadcaster phoenix, which delivers in-depth news and factual programming as a complementary service to Germany’s popular ARD and ZDF channels, is upgrading to full HD operation. The upgrade, which is being carried out without interruption to the TV station’s broadcasting operations, requires a major infrastructure overhaul; phoenix has chosen Snell IQ Modular to provide the quality and reliability essential for broadcast operations. The order includes a total of 125 modular units housed in just 16 3RU enclosures, covering analog and digital (3G/HD) DAs, synchronizers, and audio Mux and Demux, as well as 3G/HD synchronized changeover switches featuring automatic failover. All IQ Modular units feature Snell’s RollCall enterprise-wide intelligent system control and monitoring as standard, as well as SNMP, which enables them to integrate with third party control and monitoring systems. 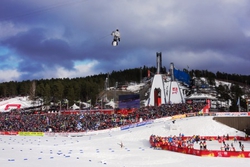 The host broadcast operation was carried out by SVT (Swedish Television) with all races produced in HDTV with the support of Mediatec Broadcast. Working for Mediatec Broadcast some of the most spectacular images of the events were produced by XD motion with its arsenal of specialist cameras:
•   X fly 2D 700 meters long
•   X track towards the finish line
•   2 cranes 60 meters high
•   Cine G gyro-stabilized head RF with 22x lens
Benoit Dentan and the five members from XD motion were working hand in hand with Axel Engstrom from Mediatec Broadcast and the TV director Johan Bernhagen to deliver stunning images and to catch the attention of the viewers in front of their TV sets. 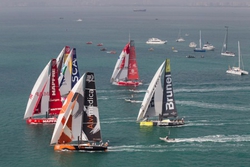 The Volvo Ocean Race is a testament to the skill and endurance of the crews battling the sea and the elements in a trial of seamanship and boat design. It also illustrates the crucial part communications play in modern sailing. Cobham has a major role in the Volvo Ocean Race 2014-15, supplying technology that not just keeps the boats in touch with the control centre and provides vital contact in time of emergency, but is also a key element in video coverage of the race. The Volvo Ocean Race's history stretches back 42 years, when it was known as the Whitbread Round the World Race. Volvo took over sponsorship in 2001, since when the race's profile has risen higher, largely because of greater media awareness and coverage. 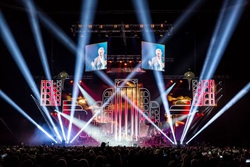 Karel Gott is the best known and most successful ever Czech singer. His  incredible career spans over 50 years and has been highly innovative, spawned numerous international hits, selling millions of records, earning multiple awards plus a devoted following as well as having to embrace political expediency during the years of (then) Czechoslovakia’s Communist years and under occupation by the USSR. He arranged a massive farewell tour in 1990, which was such a huge success … that he decided to continue his musical career to the delight of his fans both in the Czech Republic, Germany, the many other ex-Soviet Bloc countries where he also has a huge following as well as his international fan-base. He has also become an accomplished painter. 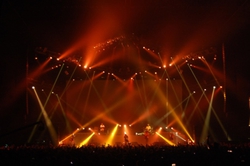 Clay Paky fixtures have delivered an epic rock show for metalcore five-piece Bring Me The Horizon’s sold out date at the SSE Arena Wembley, with lighting designer Ben Inskip choosing them for their unparalleled power and aerial effects. The Sheffield-born group has recently been experimenting with video content, leading to the incorporation of a large upstage projection surface in the design for Wembley - their biggest show to date. To complement this, Inskip specified Clay Paky Sharpys, Alpha Beam 700s and Alpha Beam 300s from leading rental company Siyan. 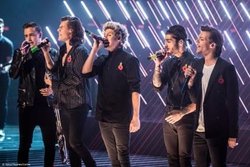 For the most recent run of Thames TV/SycoTV’s popular talent search, The X Factor, XL Video supplied custom video set-ups for several of the guest artist appearances. Working with One Direction and their Creative Director, Lee Lodge, XL Video provided 144 Barco MiStrip LED batons which were housed in a custom structure created by design studio, Artisan, as a backdrop for the band’s performance of their recent single ‘Steal My Girl’. The MiStrips complemented a sea of lasers behind the band, and content for the batons was controlled by two of XL’s d3 media servers. 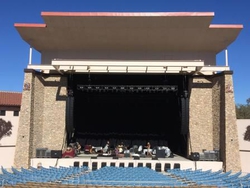 Crosby, Stills and Nash Hit the Road With JBL and and Crown

When Crosby, Stills and Nash first started singing together in 1968, they immediately knew they had something special in their distinctive blend of soaring vocal harmonies and hybrid folk-rock musical style. In 2014 they are still going strong, having recently completed a nationwide tour performing career-spanning hits and new songs. For the 2014 tour, CSN’s live sound company Sound Image upped the performance of its tour sound rig using HARMAN’s JBL flagship VTX line arrays and latest-generation Crown I-Tech HD Series amplifiers. For every venue on the tour, Escondido, California-based Sound Image used a combination of JBL V20 line array elements and S25 suspendable, cardioid-arrayable subwoofers.

Visual Impact has ordered six of the modular 4K cameras, with four sold to leading rental company 24-7 Drama and the remaining two available for immediate supply. “This is a great 4K camera from Panasonic and offers our customers a true alternative to the current large sensor cameras we stock,“ said Tim Sparrock Director of Visual Impact. The units bound for 24-7 Drama will be used on a major new TV drama which will be screened in the autumn. The specific look and 4K workflow of the VariCam 35 made it an ideal choice for this drama.