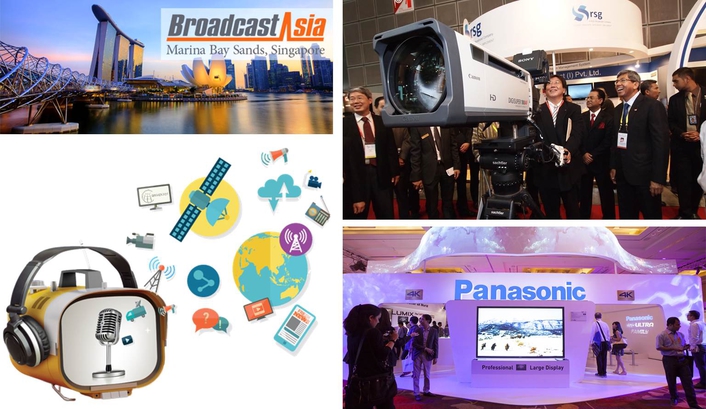 Well established and recognised as Asia’s must attend international event for the pro-audio, film and broadcasting industry, BroadcastAsia2016 is back from 31 May – 3 June 2016 at Marina Bay Sands, Singapore. Make dynamic discoveries from leading brand owners at the event that will have an impact on your works. Gain insightful knowledge from the industry’s experts and power up your broadcasting and film acumens. Congregate with professionals from Broadcast, Production, Post Production, Digital Media, Entertainment, Houses of Worships, System Integrators, Rental Houses, Education and many to network and exchange business ideas.

We currently have BroadcastAsia previews online of the following companies:

The previews will be maintained on a daily basis and the link BroadcastAsia2016 will always show the growing number of featured companies in alphabetical order. 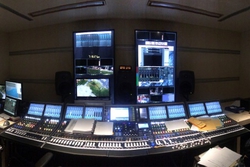 Viacom Media Networks Music and Entertainment Group is one of the early adopters of Lawo Technology, with Lawo consoles currently appearing on five of their mobile audio production units of which Atlas is the newest—consisting of two 53’ trailers, an A unit for video and a B unit for audio. The newly installed Lawo mc²66 console consists of a main section with central mix position containing 48 faders. Designed to support demanding, mission-critical applications in broadcasting, Axon's Synapse is a modular system containing multiple 19-inch frames, active hot-swappable cards, and mostly passive connector panels. Viacom's Atlas truck, one of the largest production vehicles of its type, is used for HD and 3 Gigabit location work and live events, including several 4K productions scheduled for 2016. 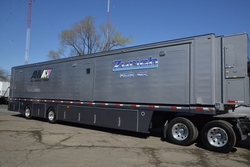 All Mobile Video (AMV) debuted a new remote truck in late February 2016 at iHeartRadio’s inaugural iHeart80s Party in Los Angeles with 11 Focusrite RedNet converters installed to handle management and distribution of the audio communications, IFB and camera control circuits throughout the video and audio production environment. The iHeart80s Party, produced at the 17,500-capacity Forum in Inglewood, California, featured 1980s music legends Culture Club, Billy Idol, Missing Persons, Rick Springfield, Loverboy and Tears For Fears, as well as DJs and VJs from the decade.  The company’s new 4K-capable truck, named Zurich, was at The Forum to generate the live broadcast to iHeartRadio’s digital platforms while also shooting and archiving Ultra High-Definition video of the show to meet future demand. Al Centrella, A1 audio operator, created the live broadcast production audio mix in Zurich, integrating the music mix delivered by mixers Jay Vicari and John Harris in the two M3 (Music Mix Mobile) trucks at the venue.

The project consisted of the supply of a Light Electronic Production OB van for outside audiovisual content production around the Balearic Islands. The OB van is built on a 12-tonne lorry, 8m long by 2.5m wide. On top of existing IB3 equipment, new equipment includes 6 Panasonic AK-HC3500 cameras, 1 Panasonic AV-HS6000 mixer, Canon KJ-17ex lenses, a Sennheiser microphone, BlackMagic auxiliary equipment, etc. The outside of the van was built in Madrid, whilst the installation and set-up of the equipment was carried out in the Mediapro building in Barcelona in the 22@ tech’ district of Barcelona. Mediamóvil, another Mediapro Group company specialising in OB vans for live television production, has also been part of the project team together with Unitecnic providing design and construction services. 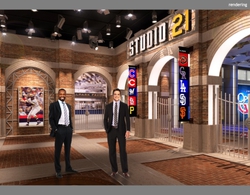 MLB Network knocks it out of the park with Calrec

In October 2015, MLB Network became responsible for all production for NHL Network, including live studio shows, taped content, intermission programming, and updates. This meant being responsible for producing content concurrently for two major sports networks. The combination of the second Apollo, the router core, and the Concord upgrade allows MLB Network to share resources quickly and easily via Hydra2 rather than the added expense and complexity of MADI. This keeps everything simple for operators and provides greater control not available via MADI transport. The router core serves as the hub of MLB Network's Calrec Hydra2 network, giving control and access to all networked audio resources. It allows MLB Network to scale up when necessary simply by adding more I/O or consoles to the Hydra2 network.

Studio Berlin placed vital Rohde & Schwarz DVS technology at the core of its production system and main control room. In order to produce major German TV shows like “The Voice of Germany” to a five million audience, the Rohde & Schwarz DVS systems are responsible for the complete production cycle: 12 channels of R&S®VENICE provide smooth ingest and playout along with transfer and transform operations for delivery. The R&S®SpycerBox ensures reliable online storage for the implemented VENICE systems. This grants Studio Berlin another competitive advantage over other service providers since their trained staff can easily move between different setups and scenarios that VENICE offers. 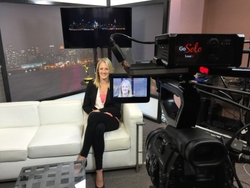 LiveU, a pioneer in live streaming technology, has created a new ‘plug and play’ live streaming bonding solution that connects automatically to Facebook, enabling broadcasters and content creators to deliver rock-solid, highly produced video streams. The Huffington Post, a leading global source of breaking news, opinion, entertainment and community, and an early adopter of LiveU Solo, is utilizing the technology to deliver high-quality live video to a wider audience on Facebook. “At The Huffington Post, we’re eager to deliver live streaming to our Facebook audience and have already increased production by seven times in the last month,” said Patrick McMenamin, Supervising Producer at The Huffington Post. “LiveU Solo has helped us become one of the first outlets to stream high-definition video direct to Facebook. We've used LiveU in the field to stream HD video in our primary campaign coverage and high-profile interviews, as well as our popular Game of Thrones after-show chat.” 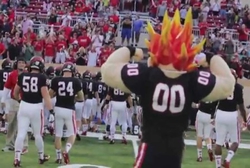 The students of Southeastern University in Lakeland, Florida have witnessed an impressive expansion of the higher learning institution’s Athletics and Media Services Departments in recent years. Upon building a new 3,500-seat stadium on campus, the university transitioned its existing TV studio and control room to an end-to-end HD production workflow, with Tightrope Media Systems’ ZEPLAY supporting lightning-fast, on-demand instant replay of existing game action and key highlights. The stadium buildout and control room upgrades were aligned with the formation of the Southeastern Fire football program. To stimulate fan engagement inside the stadium, the Media Services Department wanted an affordable, multichannel instant replay server that would deliver high-quality video clips, yet was simple enough for students to operate with minimal training. 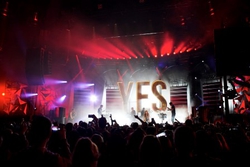 It’s a Yes for Robe

The annual YesLive show helps inspire 15 – 17 year olds to get involved in once-in-a-lifetime activities via the National Citizen Service (NCS) initiative. Bryan worked alongside CC Labs who commissioned MIRRAD to produce the show design and co-ordinate the visual production including lighting, set and video. He and Jamie started with a series of four 3 x 2 metre ‘scenic’ screens curving around the back of the stage mimicking the curvature of the venue’s famous architecture. A downstage centre video screen 6 metres wide by 3.5 metres high came in and out on a Kinesys system shielding the stage for changeovers. Lighting, the LED screens and automation was supplied by leading UK rental company Colour Sound Experiment – which has a large stock of Robe fixtures. 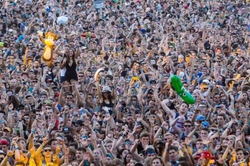 Primavera Sound (Spain), Bonnaroo, Lollapalooza and Austin City Limits Music Festival (USA), Roskilde (Denmark) and Bestival (UK) will be broadcasted on Red Bull TV from June to October through 18+ days of live programming. Viewers will experience live music in high quality stream while accessing behind-the-scene stories thanks to the hosts and a crew of reporters attending all six festivals. Off-stage life, party atmosphere and exclusive interviews with the world's biggest artists will be part of these Season of Festivals broadcasts. A global and genre-spanning variety of performances will be broadcasted, a sonic and visual journey that will go from Barcelona, Spain to Manchester, Tennessee (USA) Roskilde (DK), Chicago (USA), the Isle of Wight (UK) and Austin, Texas (USA). 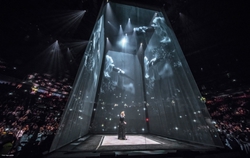 To describe Adele Laurie Blue Adkins, known worldwide as Adele, simply as ‘successful’ would be a bold understatement. Releasing her debut album “19” in 2008, her career has soared to incredible heights. The album was certified seven times platinum in the UK and double platinum in the US. At the 51st Annual Grammy Awards in 2009, Adele received the awards for Best New Artist and Best Female Pop Vocal Performance. Her second studio album “21” was even more successful and earned numerous awards, including a record-tying six Grammy Awards, two Brit Awards, and three American Music Awards. The album has sold 31 million copies worldwide. Her third studio album “25” became the 2015 year's best-selling album and broke first week sales records in both the UK and US. Now the artist is touring the globe with her “Live 2016” – World Tour. 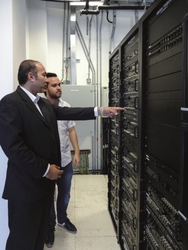 Riedel Communications announced that the Lusail Sports Arena in Lusail, Qatar, is using the Riedel MediorNet real-time media network and RockNet real-time audio network to simplify management of numerous signals throughout the venue. Built to host matches of the 2015 World Men's Handball Championship, the 15,300-capacity indoor sports arena leverages the Riedel fiber networks to reduce the overall volume of cabling required and to make a variety of signals available as needed to support live events. "Our goal in deploying a fiber network at the Lusail Sports Arena was to manage the transport and routing of many signals throughout the building in the most efficient manner," said Moufed Elefrangy, project engineer at Techno Q, the Qatar-based systems integrator responsible for the project.

Sports digital and broadcast firm deltatre have struck a commercial deal with Tokyo-based sports data provider DataStadium. The two will act as partners for the delivery of innovative sport solutions to enhance the digital and broadcast content offering across the Japanese market. “With its extensive experience with global industry players such as BBC, SkyperfecTV, BT, FIFA and UEFA, deltatre will help us bring state-of-the-art sport experiences in Japan.” – said Yoshihiko Kato, CEO at DataStadium. 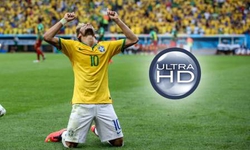 The Viasat Ultra HD channel will be launched after the summer in Sweden, Norway, Denmark and Finland via an SES-5 satellite operating at 5 degrees East. Viasat customers equipped with a Samsung Ultra HD set top box, plus a new TV-module to be launched during the summer, will be able to experience a number of sports events, including selected live Champions League matches, and other content from MTG's portfolio, specially produced in Ultra HD. The channel will initially be available to all Viasat satellite customers with sports channels in their package. 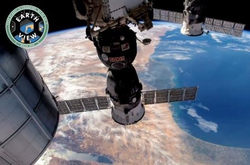 Claro Chile, a subsidiary of America Movil, the third largest telecommunications operator in the world and the largest in Latin America, and Harmonic (NASDAQ: HLIT), the worldwide leader in video delivery infrastructure, today announced that they will demonstrate end-to-end Ultra HD (UHD) delivery via Claro Chile's distribution network. Over the next few months, Claro Chile will showcase breathtaking UHD images produced and delivered by Harmonic on Sony® UHD TV sets. The UHD demo channel will be the first of its kind shown in the country, highlighting the growing momentum for UHD content.

ATEME announced that RTVE, Spain’s public service broadcaster and largest audiovisual group in the country, broadcast the opera by Wagner “Parsifal” from Teatro Real on April 21, live in Ultra High Definition (UHD). The broadcast took place via HISPASAT satellite and terrestrial network, in partnership with ATEME, who provided the digital compression of the signal. This state-of-the-art technological and European-wide project was the launch event of a series of cultural broadcasts. RTVE was in charge of signal production, coordination and technical realization of the event. The show was available in Spain, as well as in the rest of Europe via Hispasat and via terrestrial network using a DVB-T2.