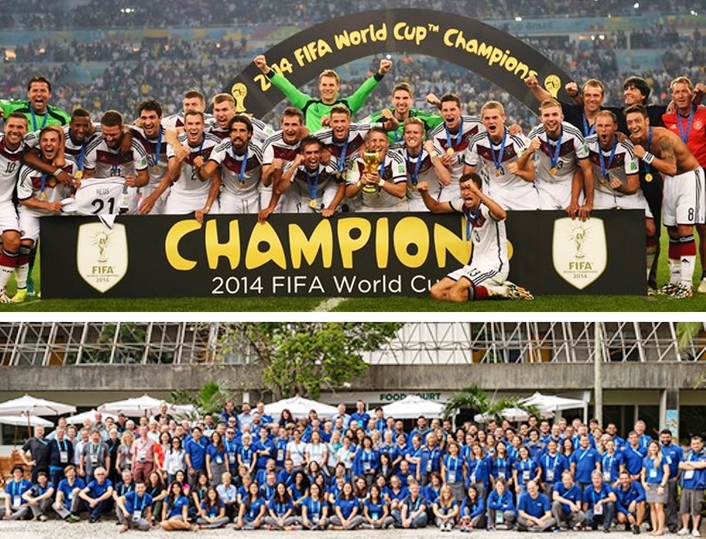 The 2014 FIFA World Cup Brazil ended two days ago with Germany claiming the trophy, and can now safely be called a “best ever”. Audience figures set new records on all continents, the matches were recognized as being of a tremendously high level, and the host broadcast of the tournament was hailed by spectators and media from across the planet. The World Cup has become a global multimedia event. While watching the match live on TV remains the most popular way for people to follow the competition, a variety of other options are  available. Tablet devices and quasi-permanent connectivity (3G, 4G, LTE, Wi-Fi) have changed the way people consume an event. 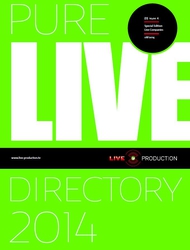 We’ve been to Brazil and have visited the International Broadcast Center at Riocentro and the Host Broadcast Compound at the Maracano Stadium in Rio de Janeiro. We have visited NHK, beIN Sports, KBS, ARD/ZDF, the BBC, TV Globo/SporTV, TV Azteca, SRG, ORF, Univision and Deportes. In our 2014 LIVE Directory you will find the report about the 34-camera production of each match, a description of the extended FIFA MAX server including the Emotion Channel and the Clips Compilation Channel as well as the 41 ENG crews following the teams across Brazil. Also highlighted will be the production of three matches in 4K and the 8K test by NHK. FIFA’s mobile and social platforms contributed to the record-breaking crowds who engaged with FIFA’s digital platformsThe Directory will be published at the end of August and will be sold at the IBC in Amsterdam. In addition we portrait the following LIVE Production companies: AED Studios, AMP VISUAL TV, Croatel, EMG with 3zero2, ACS, EMF, nobeo, s-tv and United, ISTIL Studios, LIGTV, MediaPro/MediaLuso, NEP with their facilities in Australia, Europe and the Americas, SABC, Studio Berlin/Hamburg and finally tpcag in Switzerland.

"OB 11 is one of the largest outside broadcast trucks in Europe," comments Chris Thomas, CTV Head of Vision. "It is latest addition to our fleet and can accommodate a crew of 34 people, sourcing from up to 28 live cameras. The truck is 3G-capable throughout and has a large main production suite, a huge VT area plus two additional rooms which can be used for activities such as editing or graphics. 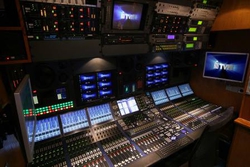 TVN first mixed festivals for live broadcast and recording in 2005. Since 2006, the company has also handled the Wacken Open Air event (the largest heavy metal festival in the world), and in 2008 took on the Hurricane festival. While his senior position puts Thyssen in charge of the 23-strong TVN-AUDIO team, he himself handles the mix during these productions. Thyssen joined TVN in 1998 as an experienced live sound engineer, and even then saw the opportunity of opening new markets with the company’s OB vans. In order to ensure high-quality live broadcast mixes, these vehicles were equipped with Lawo consoles and peripherals.

Providing a four control-room system with a centralized master control, the VER flypack supported simultaneous broadcast coverage by four different networks. The flexible modular design of the flypack and the quality of the systems integration will enable VER to meet the demands of the largest productions, or to split the system in half to support two different productions. 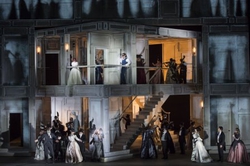 The Royal Opera House (ROH) in London’s Covent Garden is home to The Royal Opera, The Royal Ballet and the Orchestra of the Royal Opera House. As one of the world’s most prestigious venues it features more than 400 performances each season, many of which are new productions. To ensure success throughout such a demanding schedule, the venue’s production team turned to HARMAN’s Martin Professional lighting fixtures to help fill out its 1,000 light rig. 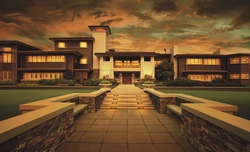 Owned by Academy award-winning film director, Sir Peter Jackson, best known for having directed and produced ‘The Hobbit’ and ‘The Lord of the Rings’ trilogy, Park Road was established as a one-stop shop with world-class integrated picture and sound departments all under one roof. 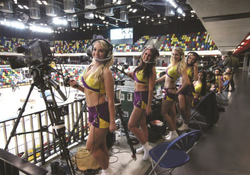 Wales-based Pedestal Television has secured a second season of 30 games to be covered live for the British Basketball League.  The BBL operates the only Men's Professional Basketball League in the UK, playing over 250 matches in a season via the League's 13 member clubs in Bristol, Cheshire, Durham, Glasgow, Leicester, London, Manchester, Leeds, Newcastle, Plymouth, Sheffield, Surrey and Worcester. Pedestal Television’s contract covers the supply, crewing and operation of the broadcast equipment required, using their flyaway PPU, Portable Production Unit. The matches are cut and streamed live via the BBL website www.bbl.org.uk, and highlights are broadcast on British Eurosport HD. 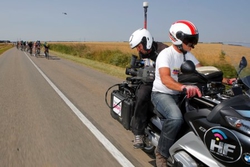 Since Christopher Froome’s victory on the Champs Elysées on 21 July last year, France Télévisions, host broadcaster of the Tour de France on behalf of Amaury Sport Organisation (A.S.O) and Euro Media France (EMF), wireless technology services provider for France Télévisions have been working non-stop, together with A.S.O, in order to offer television audiences around the world numerous technical innovations that will provide the 2014 edition of the Tour de France with the best broadcasting technology available.

Riedel and RTL Celebrate Six-Year Partnership in Formula One

Riedel Communications, provider of pioneering real-time video, audio, data, and communications networks, announced that Formula One host broadcaster RTL has, for the past six years, leveraged the Riedel RiLink Global Fiber Service to provide bidirectional links between the race circuits and the broadcast station in Cologne, Germany. In addition, Riedel's Artist and MediorNet platforms are used for communications and signal acquisition and distribution at the various race venues around the world. 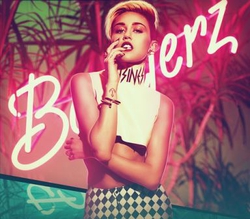 Controversial popstress Miley Cyrus is performing her hit world tour ‘Bangerz’ under the super sharp, vibrantly coloured beams of the Clay Paky Sharpy and Sharpy Wash 330. Fast becoming one of the most talked about touring shows in recent history, Bangerz features everything from giant tongue slides to flying hot dogs. Lighting designer Rob Sinclair, who has worked with Peter Gabriel, Queen, Pet Shop Boys and may others, collaborated with award winning show designer Ez Devlin to create the show’s unique look. 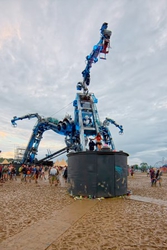 CPL Projects for Arcadia at Glastonbury 2014

Arcadia took their magic mix of metal, mechanical engineering and madness to the 2014 Glastonbury Festival of Contemporary Performing Arts (‘Glasto’ to those who know and love it!) with the return of the giant spider – around 12 metres tall and 40 metres wide - and an even bigger and better show than previous years! More than 50,000 party people enjoyed Arcadia’s superlative music line up each night of the event, moving and grooving beneath the amazing sculpture for three nights of craziness, complete with spectacular visuals created by Video Illusions and blinkinLAB, with amazing projection supplied by west Midlands based video production specialists, Central Presentations Ltd (CPL).

The 2014 Life Ball in Vienna with AKG Microphones

The highlight of the 2014 Life Ball featured celebrity speakers such as Bill Clinton, Christina Perri, Ricky Martin and more. To project the voices from these esteemed spokesmen and spokeswomen, the technical crew relied on AKG’s microphones for the highest caliber of sound. 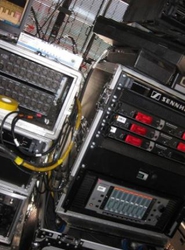 The 2014 Capital Radio Summertime Ball took place at Wembley Stadium on 21st June and featured a artist line-up which read like a Who’s Who of contemporary pop and DJing talent with 22 high profile names gracing the Wembley stage throughout the day. As in previous years, Sennheiser UK provided support and technical backup to the Ball’s audio provider Adlib. Sennheiser in-ear monitoring was exclusively used throughout the entire event, while the company’s wireless microphone systems were also extensively in use.

Capital Goes Back to the 60s with Carnaby Street - The Concert

Carnaby Street – The Concert took the sounds of the 60s up and down the UK, from the south coast of England, into Wales and up to the north of Scotland. Capital Sound was there every step of the way, providing an audio system fit for the best of the rock n’ roll era. With the tour playing small theatres, Capital’s challenge was to supply a system, complete with independent front of house and monitor desks, that would fit into a self-drive panel van, but still provide the punch and coverage the show deserved. 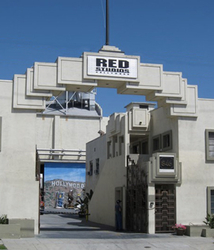 From the revolutionary RED ONE 4K digital camera that impeccably outputted the same quality video as 35mm film in 2007, to the 6K RED EPIC DRAGON, RED Digital Cinema has trailblazed to the very forefront of the digital cinema evolution in Hollywood.  RED Studios Hollywood currently lies nestled in the heart of Hollywood, offering working sound stages and a showcase production facility. Integral to the studios is the warehouse-sized playback theater and showroom, where content shot with RED cameras can be witnessed in its true 4K glory, of which Gefen is an integral part.