The Six Nations Championship is without doubt the world's greatest rugby tournament. Each year the collective fans of six proud nations – England, France, Ireland, Italy, Scotland and Wales – share in the passion and excitement of this feast of rugby. Some of the rivalries in this tournament date back more than 140 years, which simply adds to the sense of occasion.

The second round of the 2016 Six Nations Championship got underway in Paris on 13 February, where France narrowly beat defending champions Ireland 10-9 at the Stade de France.

For the first time XD Motion was invited to install their 3axes gyro-stabilized Flight head MINI together with the X fly 3D multi-dimension cable system. The Flight head MINI is a new generation of the stabilized camera remote equipment which eliminates adverse motion artifacts from all three axis (pan,roll,tilt).  It is one of the lightest and most compact stabilized heads on the market.

The X fly 3D is based on 4 fiber ropes attachment points and allows the dolly to move left & right, up & down and forward & backward. Safety critical software ensures collision avoidance as well as repeatable flight paths. The pilot can concentrate on the camera shots without having to look at the dolly camera.All the ropes are doubled, which allow total secure flights over the audience. The video and color correction signals were run trough fiber cables included in the system’s ropes. A Sony P1 camera with wide angle lens was mounted on the camera head.

The TV director Fred Godard enjoyed the pictures very much, and used the system in live as well as in replays. Also the stadium safety manager was very happy with the size of the motors and the other parts of the system which are very light and compact. 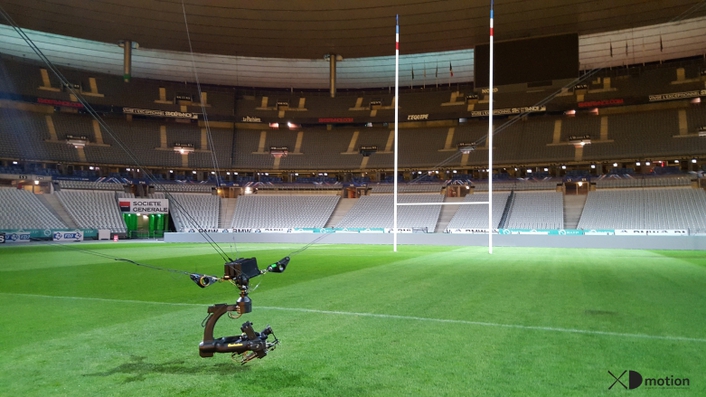