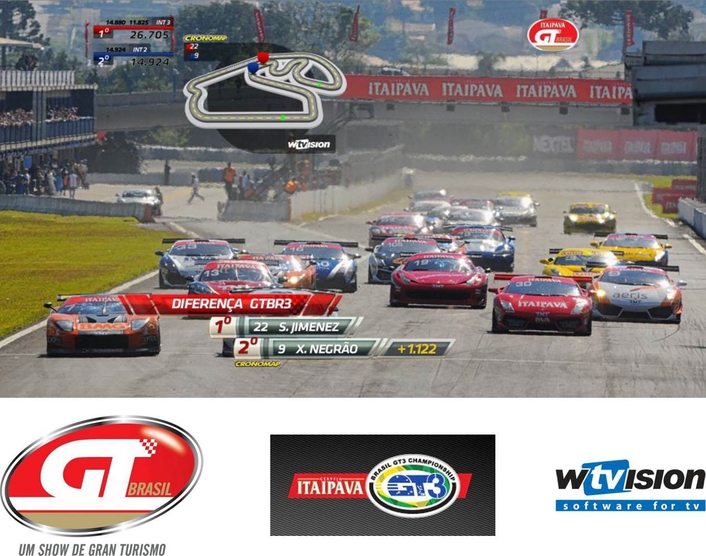 Since 2010, wTVision is present in several motorsports competitions in South America, especially in the Brazil
wTVision created a new feature for the solution that supports the motorsports competition GT, giving the viewers the ability to follow, in real-time, the positioning of the highlighted pilots. This feature was built through the increase and cross-checking of information provided by the timing system and the usage of cars and circuits mapping models.

With this resource, everyone can watch the positioning of 2 to 5 cars, in the circuit, in 3D and in real time. This allows the TV viewers to have a more global view of the race in complement to the broadcast and its regular contents. As a result, there’s been a better usage of detailed information, both about the stage and the pilots, everything managed and aired in real time.

GT is a race where pilots of Super-Cars (Ferrari, Lamborgini, Aston Martin, etc.) compete. Providing services both to the GT3 and GT4, with two races by stage, wTVision is giving a great contribute to this sport television coverage’s evolution.

The synergy between wTVision and GT has provided a visible increase in this race’s broadcast quality among several TV channels. Through the creativity employed in the graphic templates and the official timer’s integration, the company reveals its solution and graphic platforms’ versatility, both in constant change.

Since 2010, wTVision is present in several motorsports competitions in South America, especially in the Brazil. Acquiring 3 competitions, in 2010, and adding 8, in 2011, wTVision is reaching a notorious status in that region. GT is one of its success cases.

Graphics at the Brazil GT