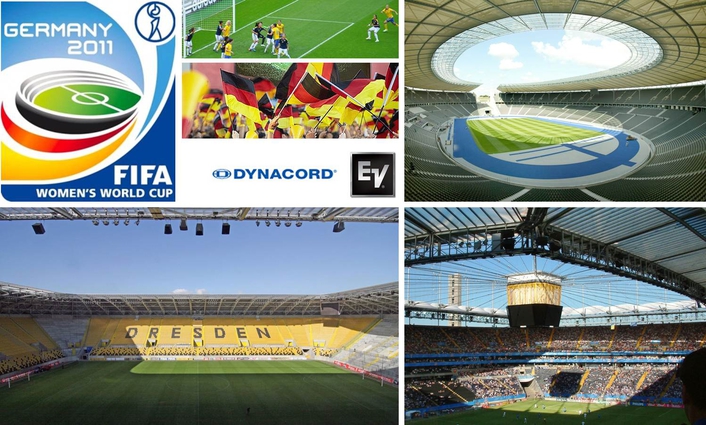 In stadiums in Berlin, Frankfurt, Dresden, and Sinsheim, sound systems from Electro-Voice and DYNACORD are setting the tone
Women's association football was long subject to ridicule, the prevailing myth being that women lacked the technique and fortitude needed to play good soccer… The recent women's world cup tournament in Germany firmly booted these myths into oblivion, as matches between the world’s best women's soccer teams captivated sports fans around the globe with remarkable athletic prowess, drama, and excitement of the highest order.

The ratings for the tournament put the women's game firmly on par with the men's, with the quarter final featuring the hosts drawing over 16 million viewers in Germany alone. And as was the case at the last two men's world championships – in Germany (2006) and South Africa (2010) – systems from Electro-Voice and DYNACORD made a sound contribution to the safety and enjoyment of spectators at this year's women's world cup. The Sinsheim, Dresden, Frankfurt, and Berlin stadiums all boast installations that meet the highest modern standards in terms of both entertainment value, and safety; and whilst the Sinsheim venue, with a capacity of 25,000, is no coliseum, the Berlin, Dresden, and Frankfurt stadiums are among Europe's biggest and best.

The Olympic Stadium in Berlin

A mammoth four-year renovation back in 2004 restored Berlin's historic Olympic Stadium to its former glory, adding a sound system that is regarded as a reference worldwide. The Berlin-based audio specialist TSE AG installed in the 74,000-seater stadium a sound reinforcement and evacuation system on a scale, and of a quality, to open the eyes and ears of audio engineers, architects, and stadium operators throughout Europe to what could actually be achieved in venues of this kind with the right equipment. The stadium's nineteen line arrays, each comprising nine Electro-Voice XLC 127+ enclosures, even satisfy the demands of concert sound. The use of remote-control amps (43 EV P3000RL units and 38 EV P1200RL) also became a blueprint applied by stadium planners to modern sports arenas of all kinds. Other stadiums hosting World Cup matches followed suit, taking the Olympic Stadium in Berlin as a model, and sound engineers even today regard it as one of the finest sporting arenas anywhere in the world in terms of sound quality.

The Glücksgas Stadium in Dresden

In the Glücksgas (formerly “Rudolf Harbig”) Stadium, Dresden boasts one of the most modern and attractive sporting venues in Germany. Opened in September 2009 after two years of building work, it has a capacity of over 32,000 spectators, with space in the VIP area for 1,200 guests. Costing some 46 million euro, the stadium was erected on the site in Dresden's Volkspark formerly occupied by the Dynamo Stadium. Hesse & Partner of Rostock and Meißner of Warnemünde were responsible for the design and installation of the sound system. It combines pro audio solutions from Electro-Voice and ELA systems from DYNACORD, with an equipment list including a DYNACORD PROMATRIX system, DYNACORD DSA8405 multi-channel amplifiers with integrated RCM-810 modules, an Electro-Voice NetMax N8000 digital matrix controller, and Electro-Voice FRX+PI enclosures.

The Commerzbank Arena in Frankfurt

Three years in the construction and costing 126 million euro, the 48,000-seater Commerzbank Arena, Frankfurt, was opened in 2005. A single-source solution for pro sound and ELA was chosen here too, with EVI Audio again being the preferred source. On the pro sound side, the installation features inter alia 24 P3000RL amplifiers, 84 FRX+PI series enclosures and a number of N8000 network controllers (all from Electro-Voice). The ELA system includes 31 DPA 4120 and 74 DPA 4140 power amplifiers and six DPM 4000 digital audio matrices (all from DYNACORD).