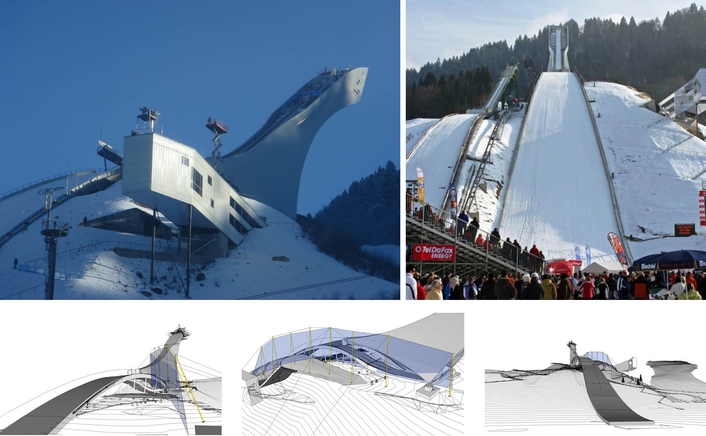 More guarantee for New Year`s jumping in Garmisch-Partenkirchen
For the first time the traditional New Year`s jumping inGarmisch-Partenkirchen, the Four Hills Tournament`s second station, will bestaged with a windshield. On behalf of the German Ski Federation the Austrianspecialist Alpina installed a windshield of 1500 m² alongside the new Olympichill to ensure the holding of the ski jumping highlight on January, 1.

With this the Ski Federation and the organizing committee respond to the last year`s experiences, when the competition had to be cancelled after one round and long delays due to adverse wind conditions.

Thomas Pfüller, general secretary of the German Ski Federation explains: „Each year the Four Hills Tournament is the absolute highlight of our Nordic Ski Winter. Of course it is essential for us to ensure the holding of this event. We owe it to the fans in the stadium and to the audience of millions in front of the TVs.”

So the new Olympic Hill in Garmisch-Partenkirchen is the second station of the Four Hills Tournament being equipped with a windshield. Three years ago a windshield was installed in Innsbruck, the Tournaments`s third station. This windshield was also built by the Austrian specialist Alpina.

Michael Maurer, president of the Ski Club Partenkirchen and chairman of the organization committee points out: „I am very happy that we found a solution together with the German Ski Federation and the town. This is a great motivation for our whole team.“

Starting from the beginning of December the new construction in Garmisch-Partenkirchen will be installed between the hill and the tower of the judges, so-to-say on the Gudiberg side. The windshield has three parts, each part is ten metres high and held by seven steel poles and modern clamping systems. The new windshield is supposed to protect against the thermic afternoon wind at the Gudiberg that often starts at about 2am.  Since the construction of the Olympic Hill in 2007/8 this wind made things difficult for the judges of the International Ski Federation because the take off is more than 10 meters higher than the former take off. The first test run with the new windshield is going to take place on December, 17 and 18 at the FIS Cup in Garmisch-Partenkirchen.

Meanwhile for the colleagues in Innsbruck the windshield is standard. Alfons Schranz, president of the Four Hills Tournament and boss of the organization committee in Innsbruck says: „We made a lot of positive experience and we will absolutely hold onto this solution to ensure our jumping in Bergisel. I am glad that the second Olympic Hill in Garmisch-Partenkirchen is also equipped with a windshield now. Because this shows how important it is for us as organizers and for the Ski Federations in Germany and Austria to guarantee absolute top-class sport at the Four Hills Tournament.”

At the other two hills of the Tournament, the Schattenberg Hill in the Erdinger Arena in Oberstdorf and the Paul Außerleitner Hill in Bischofshofen no windshields are necessary. The Tournament`s manager Stefan Huber explains: „In both events the jumping takes place in the evening with floodlight with less thermic problems. Additionally these Hills are better protected against wind because of their location.”