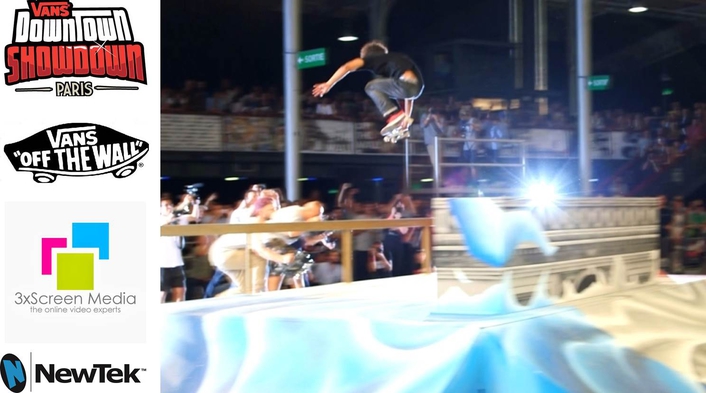 .
All the young dudes were out in force one sunny August weekend, when the Vans Downtown Showdown skateboard event rolled into Paris. With €50,000 prize money at stake for the 12 teams in competition, the event promised to be serious fun.  The live streaming specialists, 3xScreen Media, captured it all using NewTek TriCasters, 3Play instant replay and LiveText graphics.

Vans designs and distributes a wide range of specialist shoes and apparel targeted at the skateboarding community, both skaters and fans. The brand is promoted using a packed calendar of sponsored global events and a constantly updated web and social media presence. Vans’ brand strap line is “off the wall” and the coverage for the event, just like their in-house VOD channel at http://www.offthewall.tv, needs to promote the brand as young and exciting, urban and immediate.

The Vans marketing team had two objectives:  Get customers to Paris and immerse them in the event, and engage digitally with the community in other parts of the world.

Nick Street, Senior Marketing Manager, Vans EMEA, explains: “Only so many people can actually come to the event, so live web streaming is a way of making a wider audience part of the experience.  VANS consumers engage on multiple social platforms, and they consume media a lot quicker; they want to go and get things instantaneously, and they want to be part of it – that’s really a great opportunity for us.” 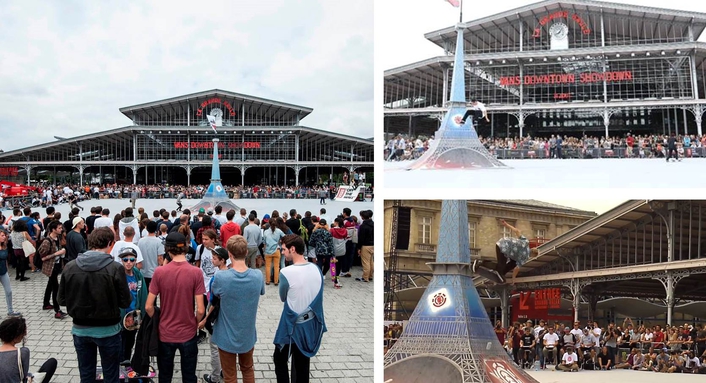 “These events are great for promoting our brand,” Nick continued, “The style of production aligns with our brand values. Skateboarders are a global community that wants immediate access to and involvement with the events”

The skateboard competition saw 12 teams skating four obstacles, each one representing a Parisian icon – from the Eiffel Tower to a designer suitcase obstacle representing Parisian chic! The skaters, as well as peripheral art and music events, were filmed and streamed live to screens around the venue, as well as to various web platforms, and the footage was recorded for later use.

“Vans’ brief was that the production needed to be cost effective; to be broadcast quality; and to be innovative,” says Scott. “Those things are really what the NewTek kit brings to our workflow.”

3xScreen Media has been using NewTek TriCasters for three years, producing around 60 productions each year. “TriCaster and 3Play are a fundamental part of our live production workflow,” says Scott. “Without them we couldn’t do the kind of productions our customers expect.”

The workflow for the Downtown Showdown consisted of 12 cameras, all feeding back to an on-site production studio which housed a TriCaster 850 and a TriCaster 855, plus a NewTek 3Play system for instant slo-mo’s, replays and highlights and NewTek Live Text for graphics. The 850 was used to feed the local screens, principally the programme output that was also streaming to the Vans website, while the 855 was the principal production machine for both the sport side of the event and the interviews and reporting during the competition.

The camera set-up included a number of innovations to keep the content fresh and exciting. “We had Go Pro Hero 3 cameras on small travel jibs for capturing the action from above - we can use those with the TriCaster as we can input almost any signal,” says Jamie Peilow, Online Video Producer and Engineer, 3xScreen Media. “We also used the Teradek Bolt wireless system which allowed us to use our overhead camera without cables, and the camera team had some handheld wireless cameras to get round the venue easily without worrying about being tethered or getting in the way of the skaters.”

Instant replay is a huge part of any sporting event, and the slow motion element provided by 3Play instant replay system beautifully highlighted the movement of the skaters. The system also brought other benefits to the production, as Scott explains. 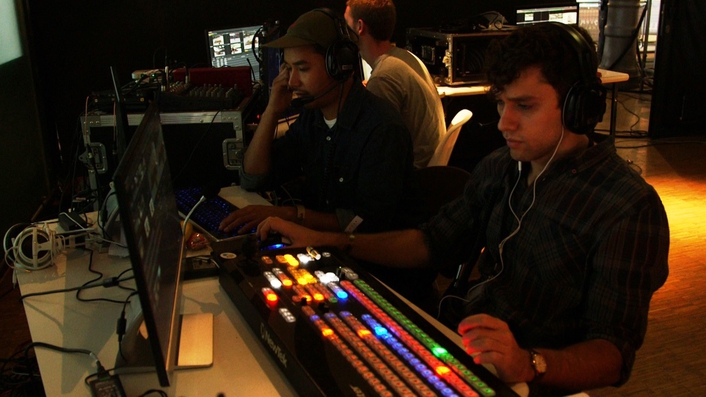 “Being able to link 3Play into our live sports productions like Downtown Showdown makes a huge difference to the production values of the event. Traditional replay machines are out of our league in terms of hire and operator costs, but 3Play allows us to bring in cost-effective instant replays and highlights packages,” he says. “In addition, using 3Play in conjunction with TriCaster on this event meant that we could take eight cameras into the TriCasters and a further four into the 3Play over the network. On an event like this, camera sources are gold! So being able to bring in network sources is very beneficial, and the two systems work together very well. Our team is also multi-disciplinary - everyone is familiar with all of the NewTek kit which means that the same guys who do live switching can also do replay.”

The slow motion element provided viewers with multiple angles of the same action, and gave the production team some breathing space since they could create a playlist to play out between events while they were preparing for the next lot of live footage.

The team also used NewTek LiveText for its dynamic graphics. Jamie recalls, “As we were interviewing people we were adding in lower thirds on the fly and animating them in and out. There was no pre-rendering so we could adapt to any changes or create new name straps for surprise guests – Live Text allowed us to be prepared for the unexpected.”

The live stream programme output was sent back via LiveU to 3xScreen Media’s master control room in London where it was recorded through another TriCaster. Some additional graphics were added, then it was published through Elemental encoders to eight different platforms and around 100 different websites. Various versions of the programme output – dirty, clean, with and without commentary – were also recorded for the later creation of a TV programme.

Scott credits the NewTek equipment as a major factor in the creation of a high quality yet cost-effective production. “For this kind of production, if we didn’t have TriCasters and 3Play, we’d need an OB truck five times bigger than the one we had, we’d need a huge production crew plus drivers, riggers and the like. Today, thanks to NewTek, we are able to do a 12 camera, broadcast quality production with 15 people.”