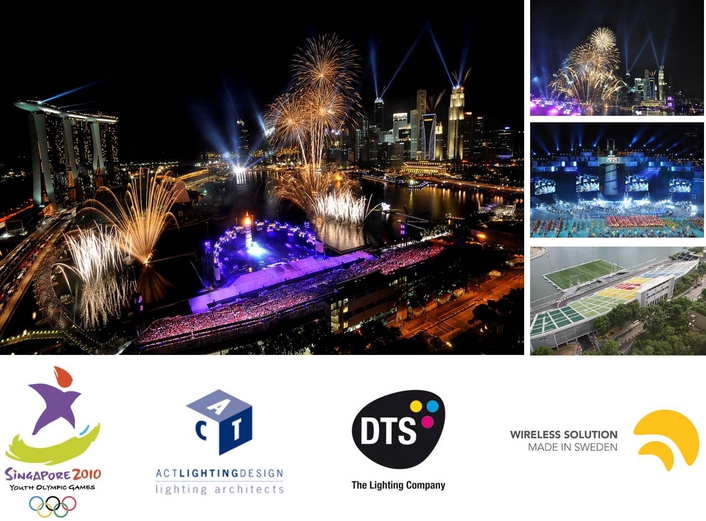 For the opening ceremonies, the floating stage platform was flooded, turning it into a floating 2-inch deep “lake”
Wireless Solution Sweden AB was a proud participant at the inaugural Youth Olympic Games this summer held in Singapore. The event hosted youth athletes 14 to 18 years old from 204 countries competing in 26 events – all hopefuls to compete in the following year’s Summer Olympics.

The opening ceremony was held on August 14 at the Float @ Marina Bay Platform, the world’s largest floating stage located in the heart of Singapore. The Singapore skyline served as a backdrop, which required a display of lighting, lasers and fireworks to truly incorporate with the scenery and show off the venue at its best. An audience of 27,000 plus the 3,500 athletes and an estimated 2 billion television viewers were mesmerized by the spectacle.

The set involved a ring of shipping containers to symbolize Singapore being the biggest harbour in South East Asia. A 5000 sq meter (54,000 sq feet) lake was created in front of the scenography. In the middle stood a 32-metre high (105 ft) lighthouse, which held the cauldron for the Olympic flame. In a very different approach to typical Games ceremonies, the Singapore skyline was used as a background, which was tied in with tremendous lighting effects, skytrackers and fireworks on the buildings, with signal delivered by Wireless Solution W-DMX™.

The lighting design for both opening and closing ceremonies was done by Koert Vermeulen, Principal Designer of Belgium-based ACT Lighting Design. PRG supplied technical services, rigging and over 1900 lighting fixtures for the ceremonies. Local supplier Showtec Communications Pte Ltd supplied the W-DMX equipment and signal support for the show.

For the opening ceremonies, the floating stage platform was flooded, turning it into a floating 2-inch deep “lake” measuring 120m x 83m (394 x 272 ft), creating an additional projection surface. From the seating area, the audience members would see the Marina Bay and Singapore skyline explode into light and colour behind the marvellous floating stage.

For the skyline, a total of 13 W-DMX BlackBox S-1 transmitters and 13 R-512 receivers distributed signal to buildings surrounding the main site, some up to 1.6 kilometres distance (1 mile). Lighting fixtures included Sycrolite SXB 7/2 and SX 8K. Lighting was controlled with 2 grandMA full size consoles plus 2 grandMA Light for the nightly light shows. The system ran approximately 8 hours a day for 12 days straight without a problem.

Vermeulen said, “What can I say? The system worked the whole time. As a lighting designer, it’s really not so much my problem to worry about the DMX signal. But I will say that when I knew we were using the W-DMX brand, I felt much better. It has the best reputation amongst all the wireless DMX brands available. Some I have used are OK only in a theatre setting, but when you get them into extreme conditions and long distances, the reliability disappears. Not so with W-DMX. We had to work within rules of the air traffic and the Urban Redevelopment Authority (URA) so we could only run certain hours of the day but every time we struck, everything worked flawlessly.”

Wireless Solution Sweden is a world leading manufacturer of Wireless lighting control equipment, with over 55,000 units sold worldwide and over 35 OEM partners. Hailed for its reliability and ease of use, Wireless Solution’s W-DMX range of products is the consistent choice for top professionals in the lighting industry and specified with perfect results in high-profile events and installations around the world. W-DMX has been used for lighting major events including the 2010 Olympics in Vancouver; the Olympic Council of Asia (OCA) Headquarters in Kuwait; Andrea Bocelli live at the Colosseum; Times Square in New York City; the Nobel Prize Banquet; the Berlin Wall 20-year Anniversary; Eurovision Song Contest 2010; and many more.